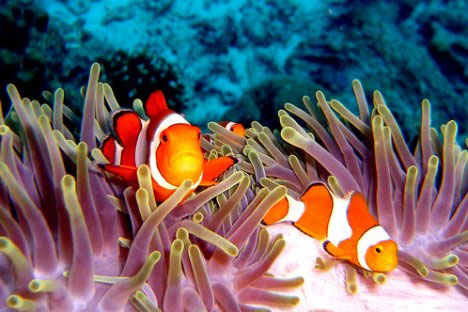 Fish are one of the most under-appreciated pets that one can own. Tell anyone that you have pet fish and they’ll ask you why you chose something so insanely boring. Well, as any fishkeeper will tell you, that is far from the truth. Not only are fish great pets that can recognize their owners, be trained, and generally entertain you for hours, but they give you the opportunity to explore some of the most interesting and cool options to pick from (or build) as their home. Here’s a selection of some of the coolest (and in some cases bizarre) fish tanks and aquariums for your favorite fish. 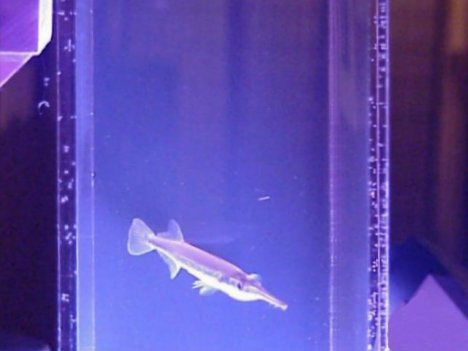 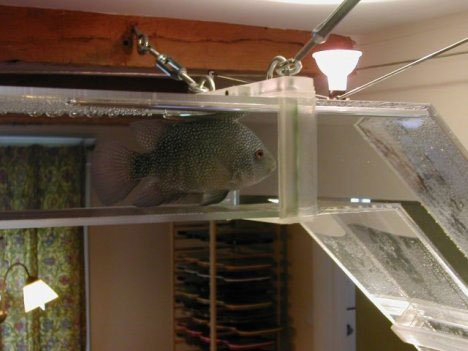 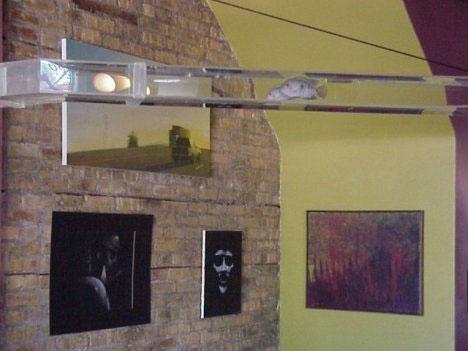 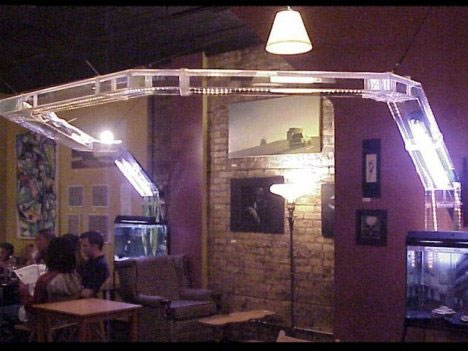 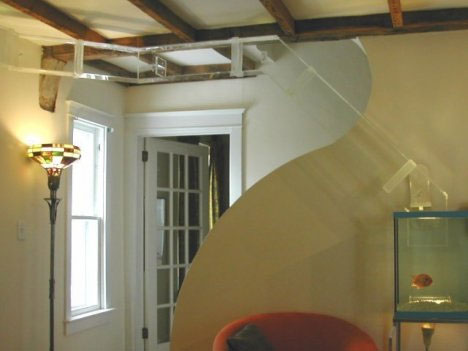 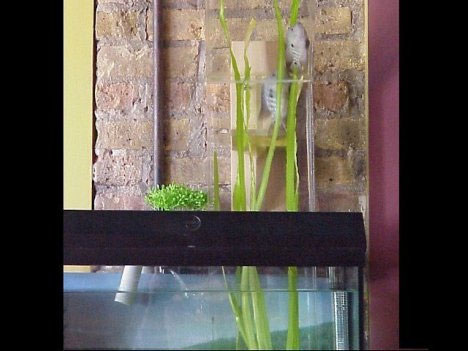 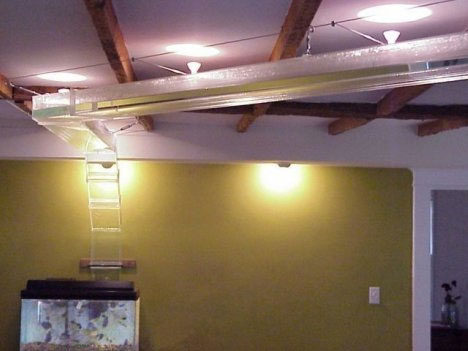 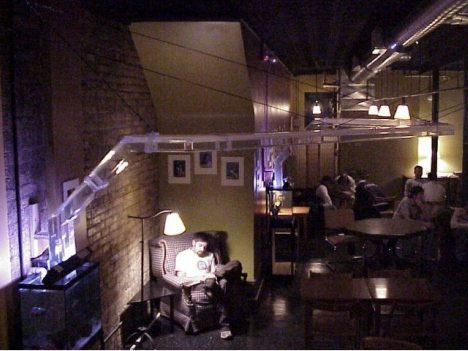 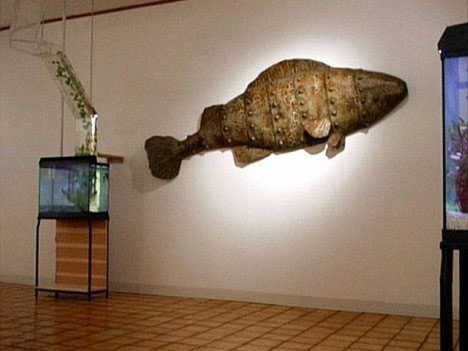 Hands down one of the most superb creations for those that love fish as pets or people interested in aquatic physics, it doesn’t get much better than the fish highway aquarium. Allowing the fish to swim out of the aquarium, along the wall and ceiling, across the room and into another tank, this patented aquarium is something to behold. Thanks to a carefully-planned, sealed design (with the exception of two openings, one on each end), the tank works like a giant straw and prevents any spillage. 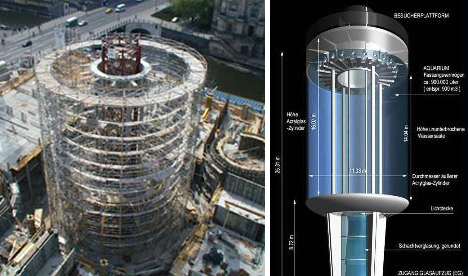 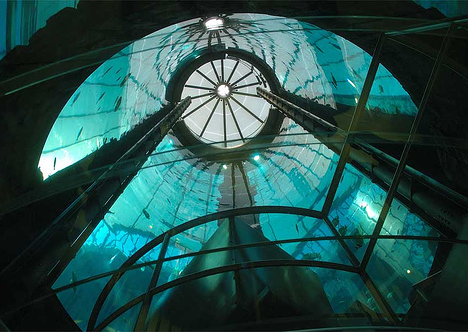 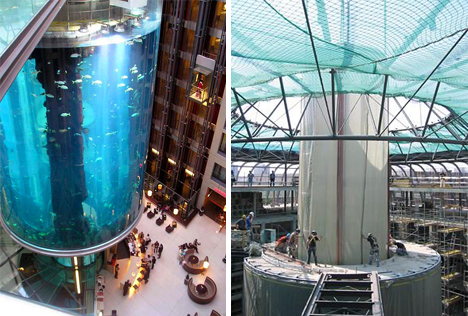 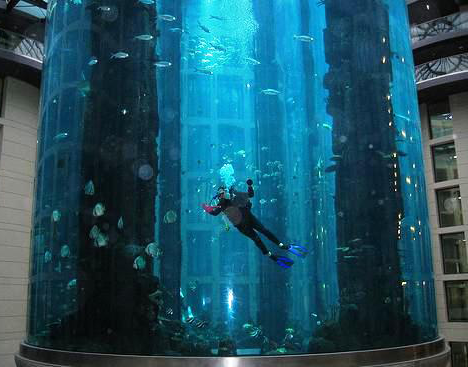 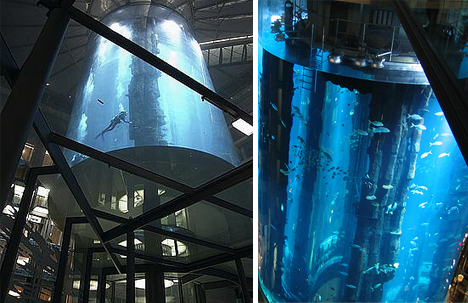 The AquaDom is a 25-meter tall cylindrical aquarium in Berlin, Germany, built with a transparent elevator inside. Located at the Radisson Hoyrl, the aquarium complex opened 5 years ago and cost approximately 12.8 million Euros. It is filled with 900,000 liters of seawater and houses a total of 2,600 fish of 56 different species. Since cleaning of the aquarium and feeding of the fish is done manually, you can always see a team of divers swimming around performing their duties. 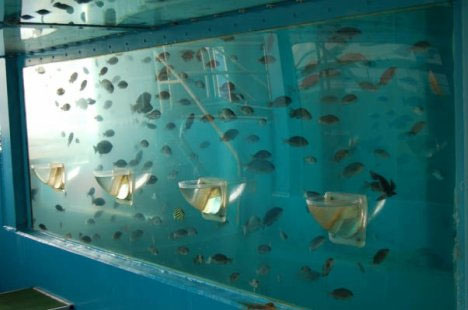 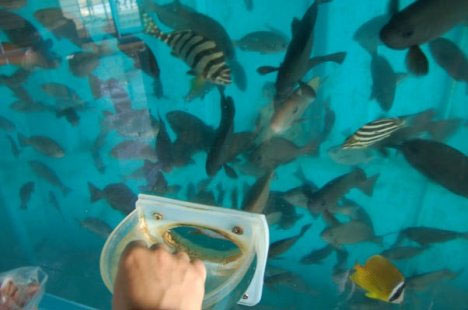 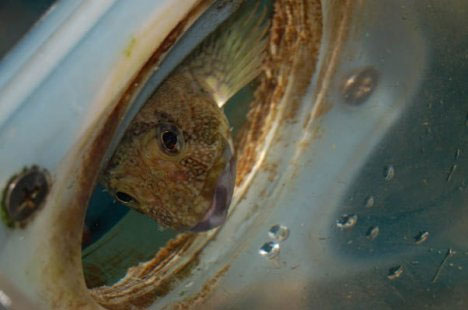 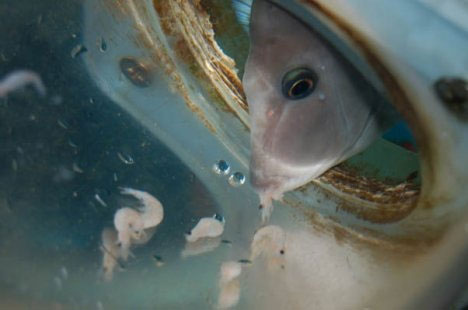 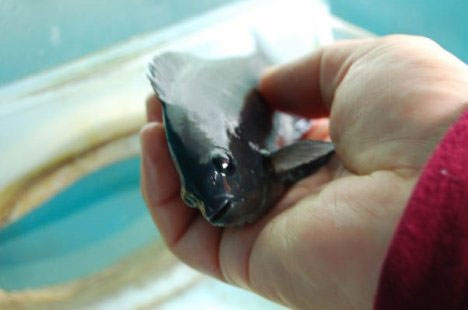 Though the aquarium is not flashy or visibly technologically complicated, it is still quite amazing. It can be baffling at first sight and you may wonder, why doesn’t the water come gushing out of the holes in the glass? The holes, which are used for feeding (and sometimes petting) the fish are clearly open, and there is no visible mechanism pushing the water back, what sustains the water level then? It is a simple matter of physics. Because the tank itself is air-tight, by reducing the pressure inside the tank and matching it to the atmospheric pressure in the little water cups adjacent to the holes they maintain it so that the water has no reason to move in either direction. As a result, you can drop food in the cups, watch the fish come out and eat (although sometimes the more energetic ones can jump out of the holes as seen in the last photo). 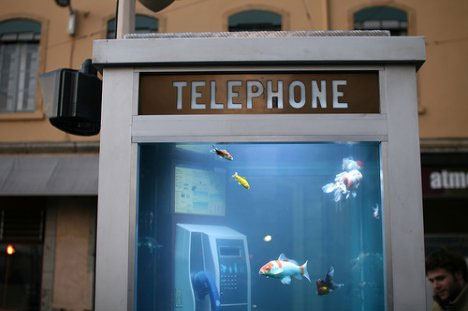 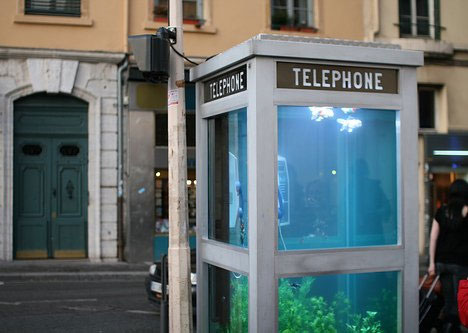 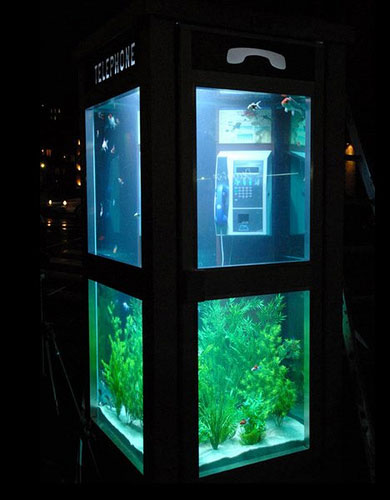 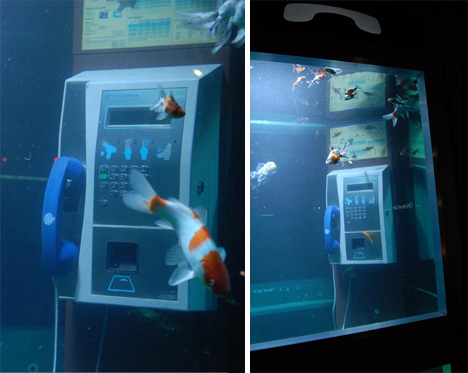 Created as part of the Lyon Lights Festival by Benoit Deseille and Benedetto Bufalino, the phone booth aquarium is a beautiful, functional, a seemingly misplaced conversation piece, and it may surprise you but it is also a statement on reuse. According to its creators, their decision to repurpose the glass cage (the phone booth) arose partly because these phone booths lie unused and rotting since most people nowadays have telephones. Why not, then, convert these ‘unused glass cages’ into luminous aquariums filld with exotic fish?

Now that the economy is in full blown recession and no one is buying any cars, maybe here’s an alternative for the auto industry. Presented at the Siam Ocean World in Bangkok (at the Siam Paragon shopping center), this car has been modified into a large and by the looks of it, quite comfortable mobile home for a few dozen fish. The car is completely sealed so don’t even think about opening the doors or any other compartment. 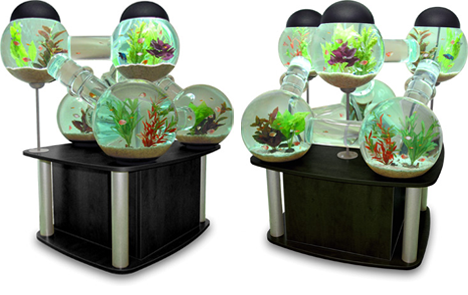 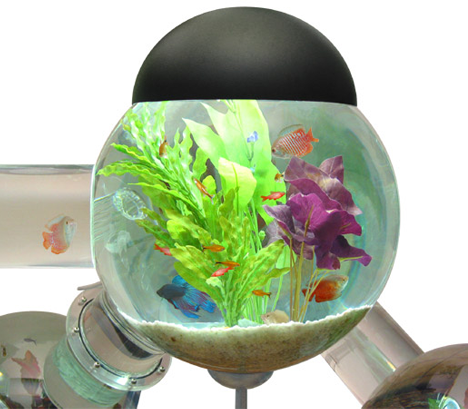 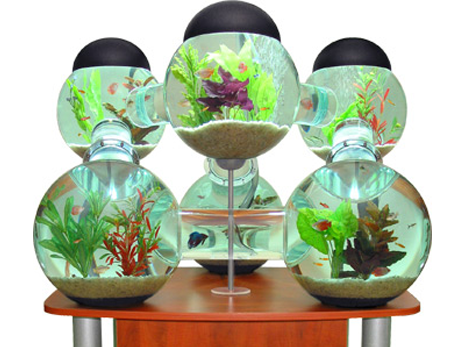 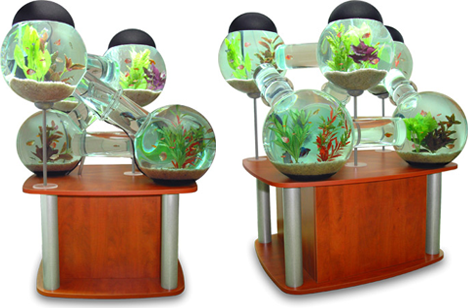 The Modular Silverfish Aquarium, built by the furniture and aquarium design firm Octopus Studios, is completely custom made and costs upwards of $3000. Designed for fresh water fish, the complete set (which can be ordered to custom specifications) can hold up to 60 gallons of water. Each bowl is supposed to allow the fish to engage in a different activity, i.e. one for feeding, one for sleeping, one for exercising, and so on.

The Aquarium Art of Takashi Amano 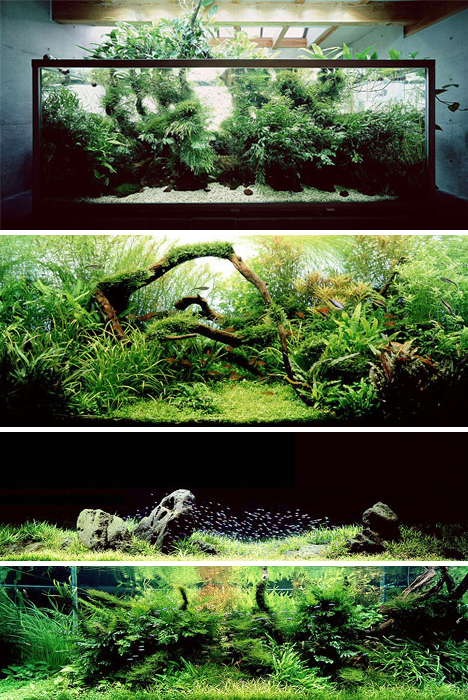 Though the beauty of this last set of photos doesn’t derive from the aquarium itself, it deserves inclusion because Takashi Amano applies his art directly to aquarium environments. A designer, photographer, and an aquarist, Amano is the author of Nature Aquarium World and is largely credited with introducing the concepts of Japanese gardening to aquascaping.