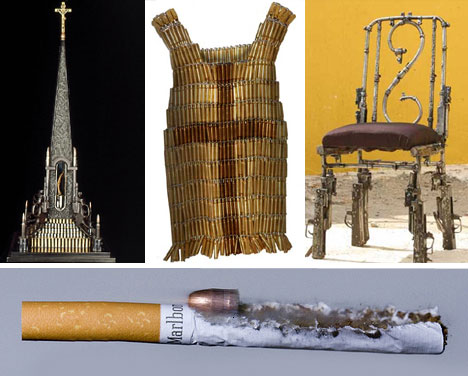 There are artists who work with paint and clay, and then there are artists who create bizarre and thought-provoking art from slightly less conventional materials to prove a point. This collection features sculptures made from guns and bullets, high-speed bullet photography, illustrations of what happens when bullets pierce flesh and even drawings made by shooting at metal and paper with a sub-machine gun.

Reliquaries Made of Guns and Ammunition 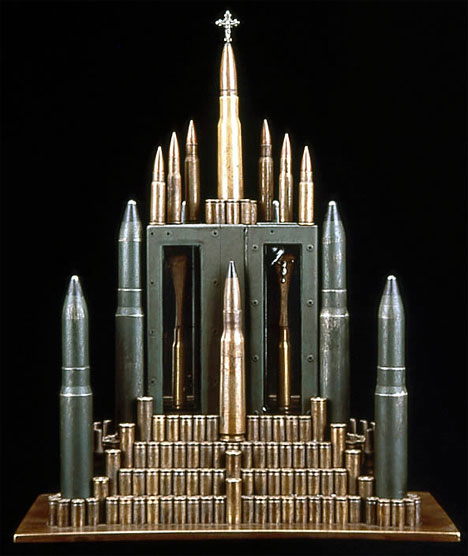 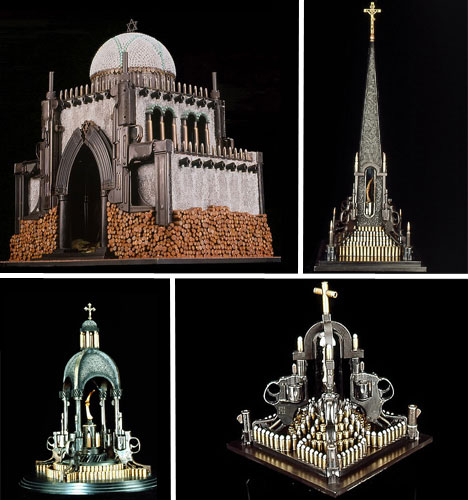 Artist Al Farrow combined religious imagery with guns and bullets to startling effect in his 2001 series, ‘Reliquaries’. The sculptures are an ironic play on the medieval cult of the relic as well as a statement about continued ties between war and religion. Farrow says that in the making of these pieces, he was absolutely astonished at the ease with which one can procure huge amounts of gun related paraphernalia. 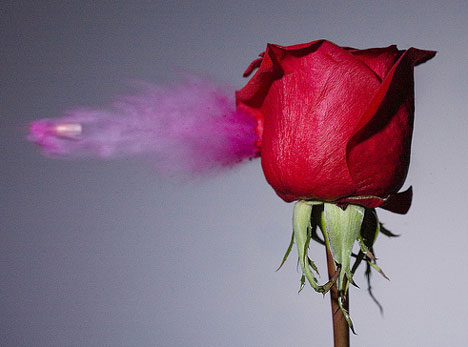 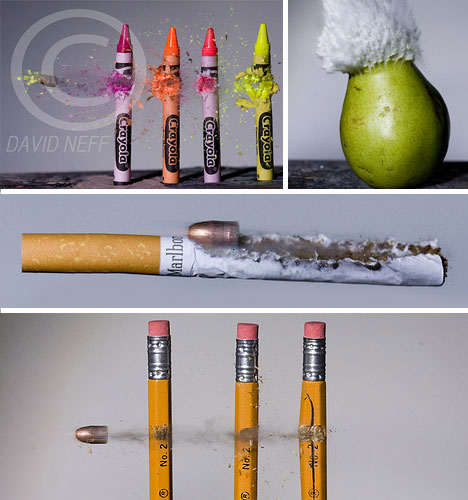 Photographer David Neff keeps his techniques top secret, declining to divulge any details as to how he captures such amazing images. In this series of high-speed bullet photography, he fires .22 bullets at various objects like pears, crayons and cigarettes and takes the photo just as the bullet is grazing or passing through them. The result is a visually stunning reminder of just how destructive bullets can be.

Furniture and Sculpture Made from Discarded Cambodian Weapons 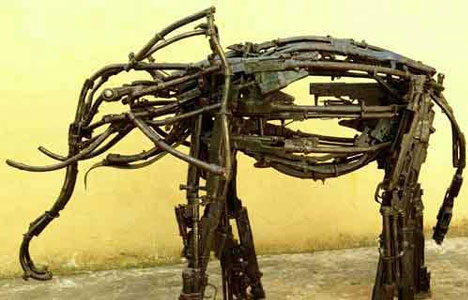 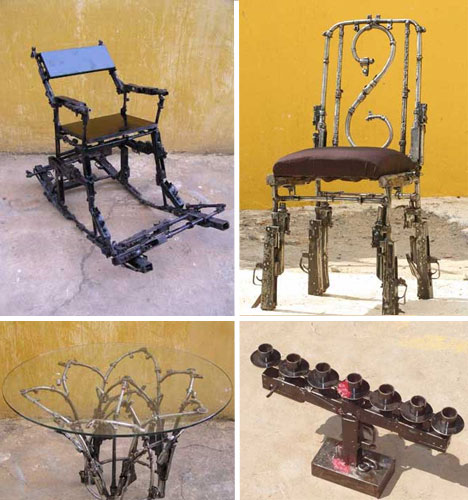 Sculptor Sasha Constable saw opportunity in the 125,000 weapons that were discarded by the Cambodian government after 30 years of war. Constable, along with a small arms specialist with the European Union, used the guns to create furniture and sculptures in The Peace Art Project Cambodia (PAPC) in November 2003. Among the items created were a coffee table, dining chair, settee, rocking chair and elephant sculpture. 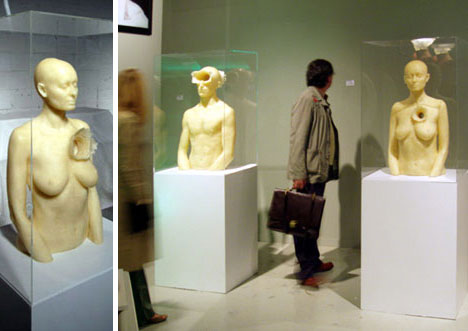 Two life size male and female wax statues give us an idea of just how damaging a 20mm cannon wound really is in “A Memory of Matter” by Petroc Dragon Sesti. In these works, Sesti sought to explore “the stillness of terminal violence”. The figures were made in collaboration with the British Army, created from hard wax heated to human body temperature to reveal a moment of mutilation frozen in time.

Art Made with Submachine Guns, Rocket Fuel and Pyrotechnics 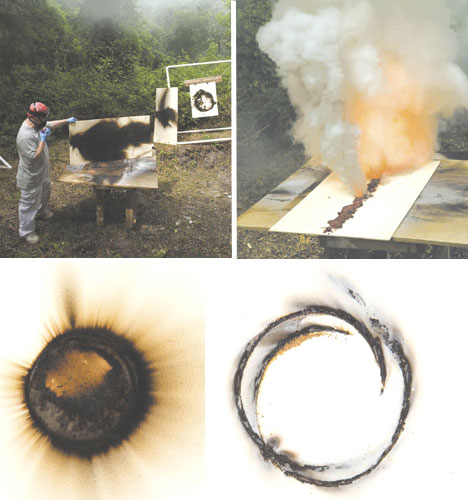 Matt Stromberg is not your typical art professor. The Savannah College of Art and Design professor of sculpture uses anything but typical materials and methods in his work. Stromberg began wondering if he could carve with a submachine gun after watching a colleague work with a pneumatic chisel, which makes similar sounds while in use. That led to his current projects, in which he ‘sculpts’ metal panels with rocket fuel, explosives, pyrotechnics, propellants and, yes, bullets.  Stromberg had to go through special training and get licensed to use these materials.

“I think it’s really a fancy way of doing what every artist does,” Stromberg says. “The result is the same as if I grabbed a chunk of charcoal and drew on paper I was going to detonate.” 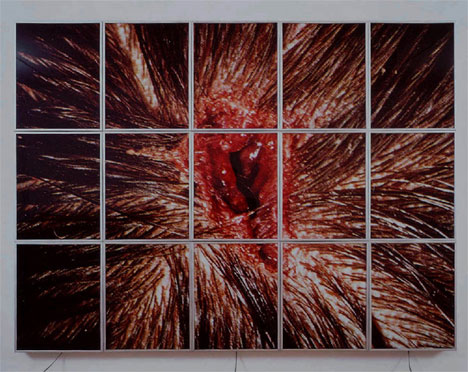 If you didn’t know what you were looking at, this piece by Mat Collishaw might look like some kind of abstract painting. Then you realize it’s hair, skin and the gore left behind by a speeding bullet. It’s one large photo made up of 15 frames, mounted on light boxes for extra in-your-face effect.  Of the image, taken from a pathology textbook, Collishaw says, “There’s a religious beauty and animal sexuality in something so abhorrent.” Not all would agree, but it’s a powerful image nonetheless. 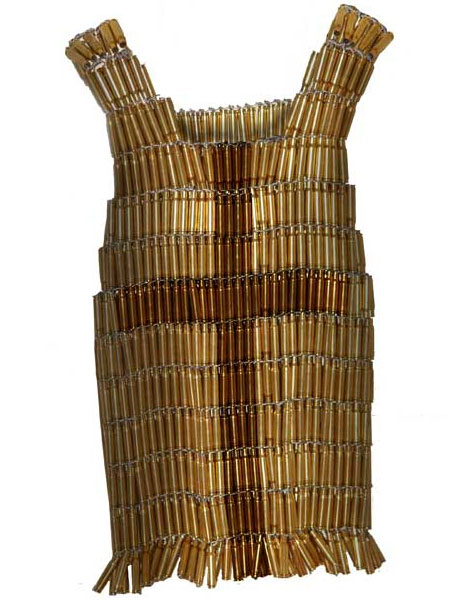 (images via: Art from the Soul)

Artist Ross Rodriquez made this ‘bulletproof vest’ with 30 caliber rifle shells. The artist, who usually works in printmaking and film, often explores the theme of gun violence in urban America. 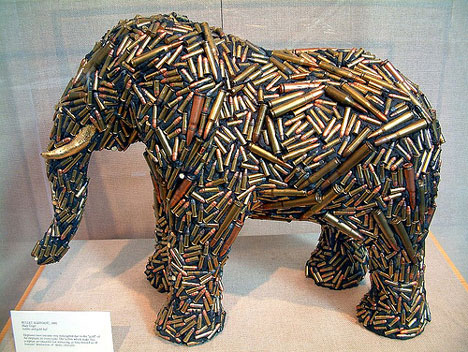 Spotted by Derek Farr at the Detroit Zoo, this elephant is a little… different than the ones roaming around outside. It’s a sculpture created by Mary Engel, who says of her creation, ” Elephants have become endangered due to the “gold” of the elephant, its ivory tusks. The bullets which make this sculpture are beautiful but menacing, as they remind us of humans’ destruction of exotic creatures”.