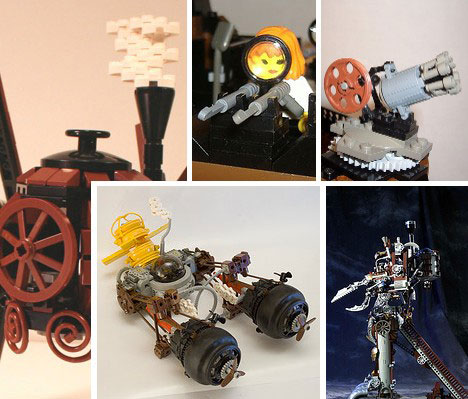 Love Steampunk? Adore Legos? Steampunk and LEGO? It may seem an incongruous combination being that LEGO is plastic and Steampunk harkens back to the age of brass & wood. Pressing on regardless, legions of LEGO-maniacs have employed the versatile bricks to create stunning scenes of Steampunk glory. 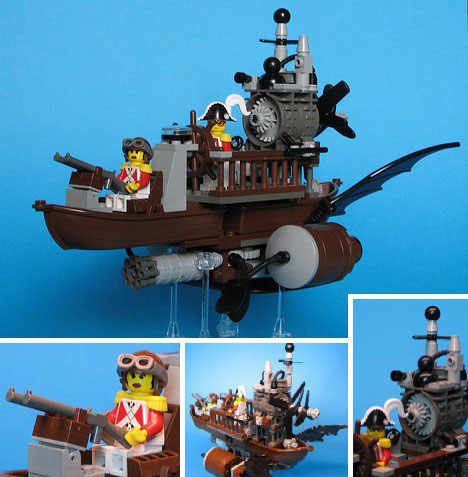 Fancy a ride on the HMAS Fearless? Well grab your pith helmet and we’ll be on our merry way! The bat wings add vintage Victorian vampiriana and one can just imagine them gently flapping as the steam boiler hisses furiously. 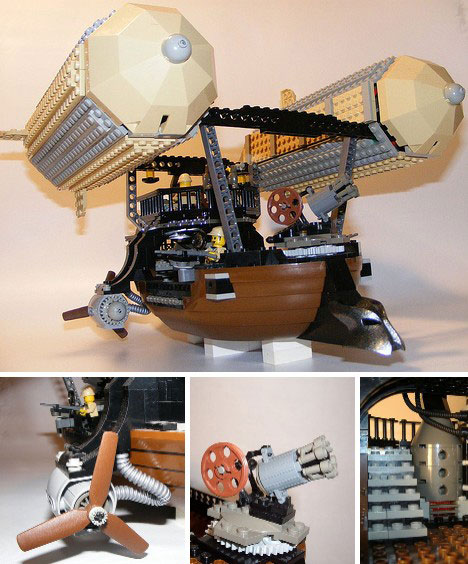 The HMAS Lord Vladek is a more ambitious undertaking that features twin dirigibles yoked to a command module – not unlike the starship Enterprise in ancestral form. The Vladek isn’t just any old windbag; its imposing eight-barreled octo-blunderbuss packs some serious firepower! 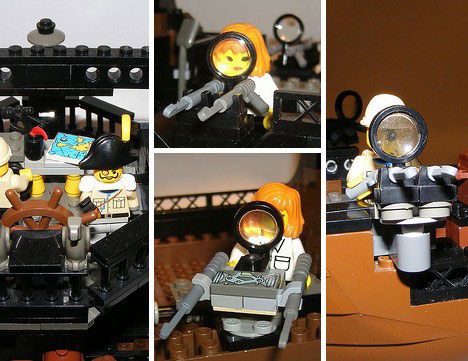 The crew of the Vladek has been rendered with almost obsessive accuracy, down to the map on the admiral’s flying bridge. Other steampunkish details include magnifying spy-screens and steam pressure gauges on the boilers. 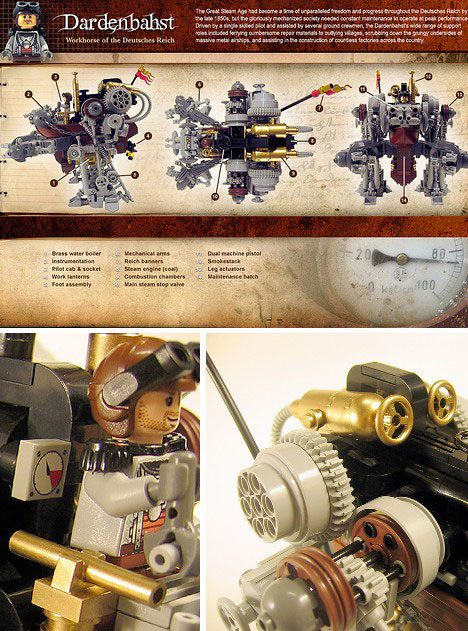 Imperial Germany has also inspired some – well, at least one – LEGO crafter. In this case, replicating the Kaiser’s brassiest dreams took far less bricks than a thou – maybe just a couple hun. 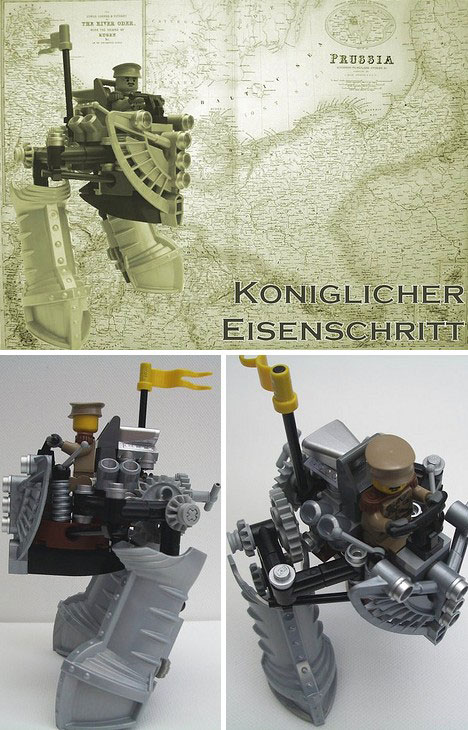 It takes a lot of brass to name a website Empire of Steam, and even more to construct steampunk style “LEGO constructions of the Imperial Age” with an elaborate mythos to accompany them. The above Kaiser Wilhelm’s Iron Stride, if actually built, certainly would have had the crowned heralds of Europe shaking in their silver-plated boots. 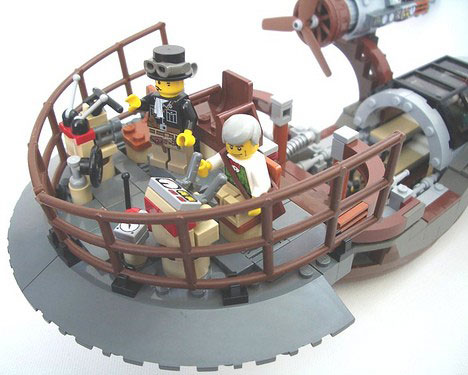 The Starship Enterprise has been depicted in a number of iterations on screens large and small, but never like this. Enter the Airship Enterprise, captained by Tiberius J. Kirk and charged with a 5-year mission to “seek out Lost Worlds and Lost Civilisations, to boldly go where no man has gone before…” 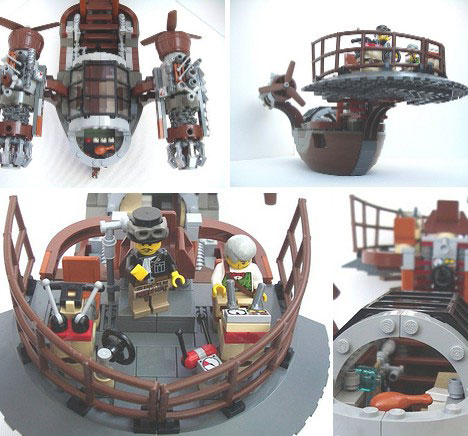 Professor Bonaparte McCoy and Mister Scott fill out the intrepid crew of the Airship Enterprise, supposedly last seen in June of 1862, a mere three months before her mission was to end with a joyous return to London and an audience with Queen Victoria. 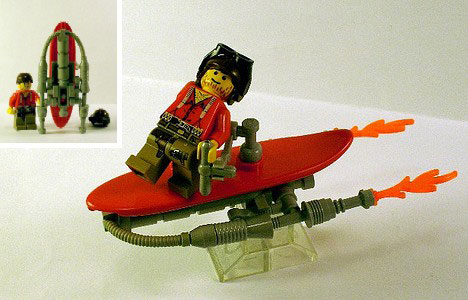 Flying machines of a smaller, less over-arching type are still well within the range of steampunk LEGO imagineers. Take the steampunk hoverboard above – Doc Brown, set the flux capacitor for 1855 this time! 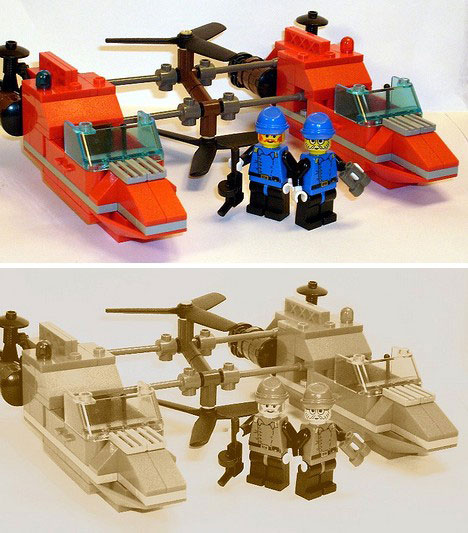 LEGO steampunkers who save their creations as images can add a dash of period charm simply by tinting with an antique sepia wash. 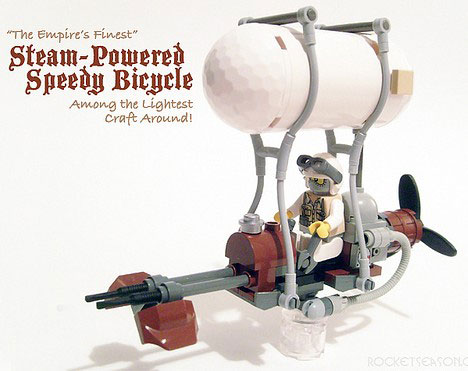 The Steam-Powered Speedy Bicycle Speeder looks to have had a real inspiration: Alberto Santos-Dumont’s steerable airships, one of which is famed for circling the Eiffel Tower in 1906. 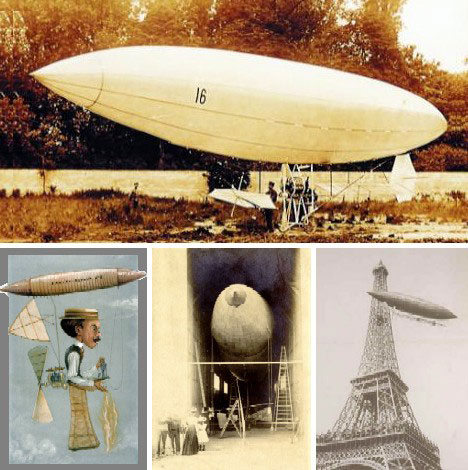 The Steam-Powered Speedy Bicycle Speeder looks to have had a real inspiration: Alberto Santos-Dumont’s steerable airships, one of which (his Number 6) is famed for circling the Eiffel Tower in 1901. 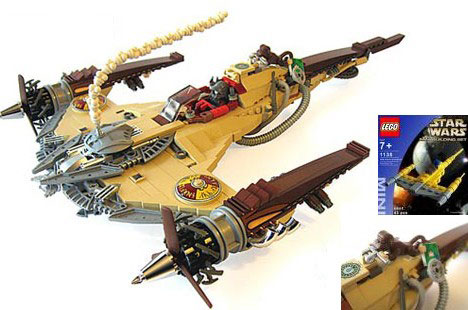 What is it about Star Wars and LEGO? Through steampunk into the mix and you’ve really got something special. The Royal Naboo Airforce fighter above was created using the standard LEGO kit as a base. Note the Navigation Monkey, essential for carrying out the primate directive. 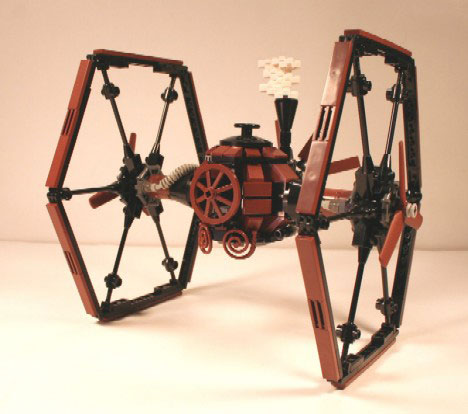 The empire strikes back, steampunk style! This incredible Tie Fighter above was built to compete in the Steam Wars contest put on by FBTB Forums. Antique it may look, but the design still has the power to induce chills – maybe it’s the dual set of whips positioned like spider fangs. 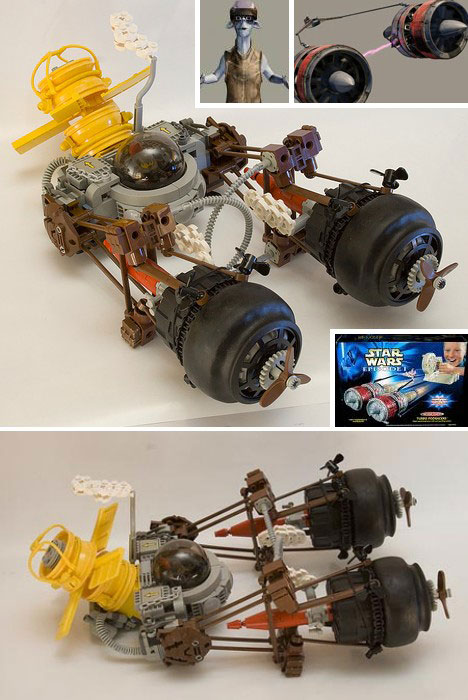 The Steam Wars contest also gave us the the Darling Apollo IV: Machina Nosejob, aka Ody Mandrel’s podracer from Episode 1. Would Ody have won the Boonta Eve Classic if only his craft was steam-powered, one wonders? 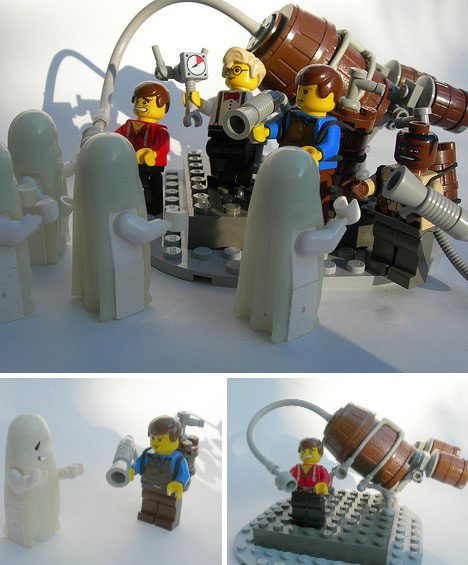 Other films have gotten the full-on steampunk LEGO treatment, such as 1984’s Ghostbusters. Above, the team is shown in 1884 style though the ghosts (being ageless) are likely the same. 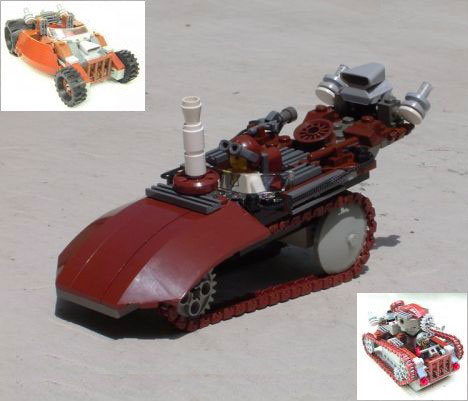 Back on Earth, Axxen Fett has, for his own dark & disturbed reasons, designed a fleet of steampunk LEGO vehicles led by of all things, a steampunk dragster. The Batmobile and a tank round out Axxen Fett’s vehicular steampunk LEGO fantasy. 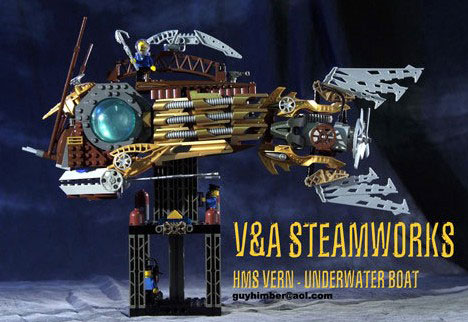 Last but certainly not least are the epic creations of V & A Steamworks, whose flagship model, as it were, is the HMS Vern shown above. 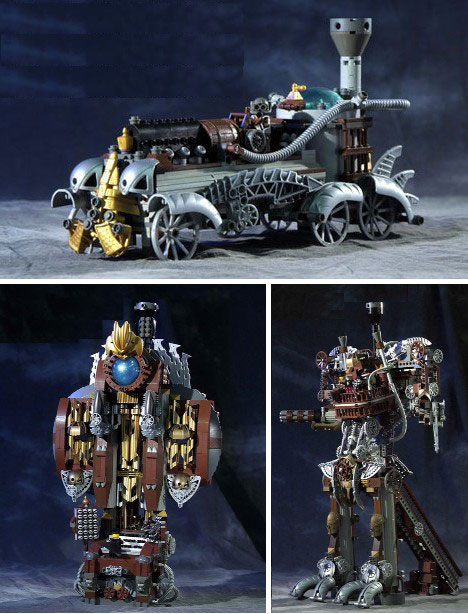 V & A Steamworks uses only standard LEGO pieces with a few from the Bionicle sets thrown in where required. If you think it takes the skill and talent of a Hollywood special effects expert to craft the Victoria, Tesla and Kensington models shown clockwise from top above, you’d be right – the brains behind V & A is Guy Himber, whose SFX work gave Independence Day and Underworld their unique looks.