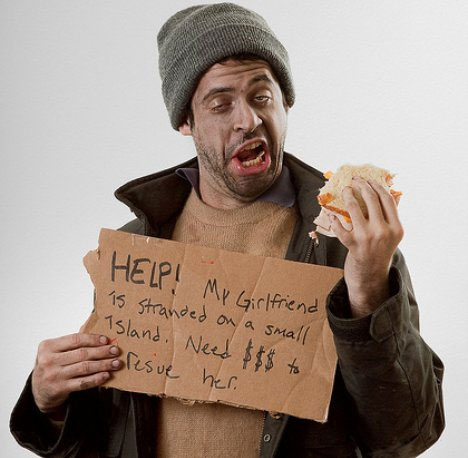 Homelessness is not a laughing matter. On the streets of every city and town in America, we find those who are much less fortunate than we are. Some are mentally disabled, and others have suffered immense financial hardships. With that in mind, there are a select few homeless who have a point to advertise themselves in creative and hysterical ways. These homeless are worth checking out, as they somehow find a way to remain chipper and candid, even in the worst of life conditions. 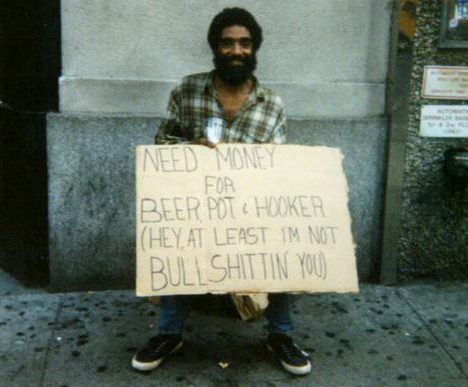 Kicking off the list is this homeless man who really understands city residents! Every city in America is home to countless homeless people who lie about what they need money for. Still others lie about being homeless altogether and are just faking it! Surely, the majority of people have learned to tune out your standard beggar, rationalizing that he will probably use the money for booze, drugs or prostitutes. This man wastes nobody’s time by coming clean with his intentions right from the start! Want to contribute to his many vices? Feel free! 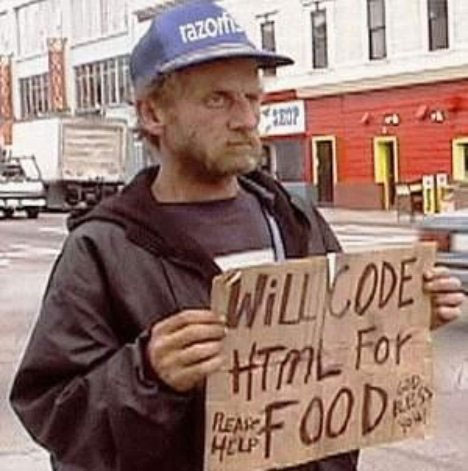 This homeless man is addressing a problem that plagues the minds of start-up owners around the world: how to get effective labor for cheap without outsourcing! Luckily, this hobo will program your entire website’s HTML layout for three hots and a cot! Business owners are always in hot water for outsourcing, why not give a down and out American entrepreneur a shot and kill two birds with one stone! Address the American job crisis while simultaneously helping the unfortunate! It’s a win-win! 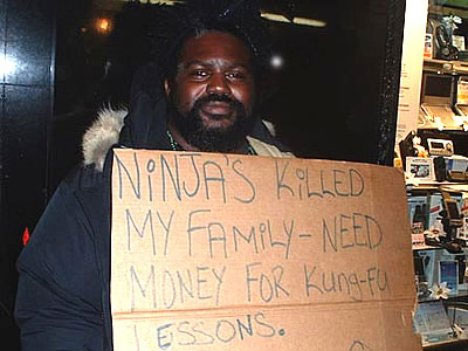 Sometimes it can be hard to muster up the strength required to crack open your wallet and help the less fortunate. However, who can deny this man the vengeance he seeks against those that brought harm to his family! Ninjas are a sneaky bunch, and perhaps it time someone does something about it! Think he’s bluffing? Why not offer to teach him kung-fu and see what kind of response you get! 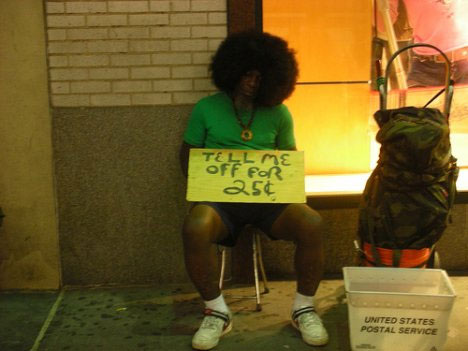 This man provides a valuable service to the corporate employer! After a long day of pointless meetings, redundant reminders from buzzword spewing upper-management, and lackluster performance from those you oversee, your head is likely stewing with a hundred and one things you’d like to scream at all those around you! This man provides a cathartic outlet for displaced aggression, and who can argue with his price! Just picture your boss, employees, or conniving ex-girlfriend’s head on his shoulders and let the profanities fly! 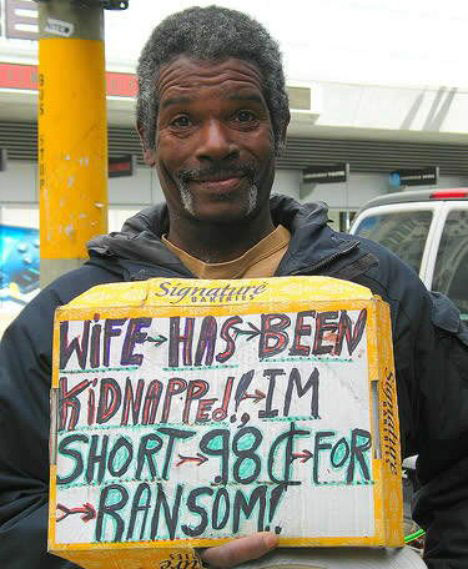 Here’s a man you can’t help but assist! A kidnapped wife and less than a dollar away from demanded ransom! Imagine coming home from a completely normal day to find your wife missing, and a note demanding ransom worth just 98 cents more than your bank account has! I bet he’s regretting that coffee he bought on the drive home! The story truly is tragic, and perhaps the culprits were the same ninjas who killed number three’s family! Hopefully you helped the man out; he could be out defeating those troublesome ninjas now… 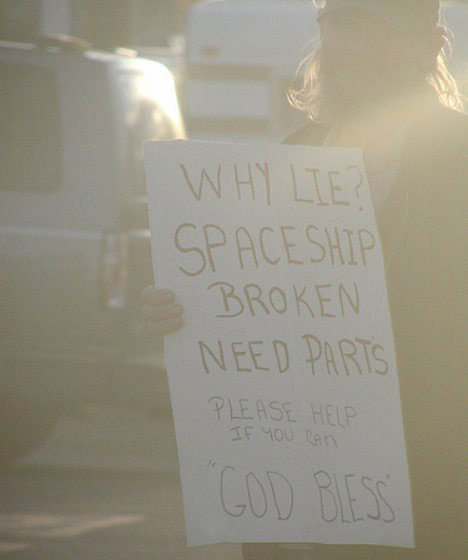 The truth is out there, and this man won’t hide it any longer… or should I say, this alien! Stuck in a strange world, light years from home, this poor extraterrestrial has cleverly disguised himself as a human in order to procure that green stuff we call money so that he can fix his space ship! Unfortunate as it may be, this particular species is intelligent enough to create a space ship capable of traveling to Earth, but cannot figure out how to fix it without asking people for money. Peculiar indeed! 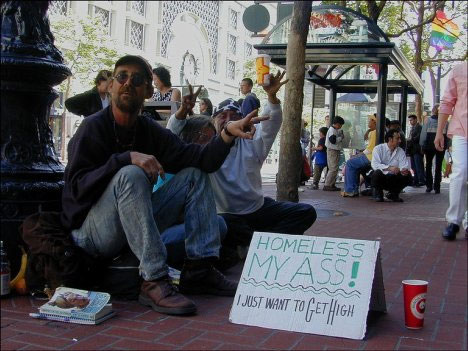 Hippies used to stick together in the 60s and 70s. If someone had the “goods”, EVERYONE had the “goods!” We live in a changing world however, and these guys apparently refuse to get with the times. Hoping for a sympathizer who perhaps attended the same Woodstock and Burning Man festivals in their heyday, these men sit and proudly wave their piece signs for all to see! Sit down and offer them a hit or two, you may just make friends for life! 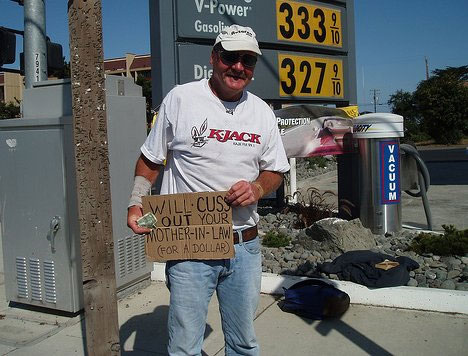 Whoever said the homeless contribute nothing to society! This man is providing a service we all need, cussing out our damn mother-in-laws! Dinner is never good enough, you don’t raise your kids right and your take on religion is all wrong! You hear this and more far too often, yet you always bite your tongue, waiting for the day you might get to say what you REALLY think of her photo albums! Well wait no longer because this man is ready and willing to unload on the beast for a fee! 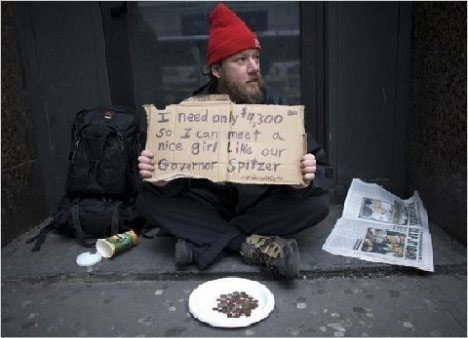 Even among the homeless, political satire thrives! Clearly taking a shot at the state of affairs Governor Spitzer apparently put this man into, he hopes to gain your spare change for a laugh! One has to wonder though, where did he get such a figure from? $4,300 seems an awfully specific amount to strive for! He must have some specific purchase in mind, if we only we knew what it could be! 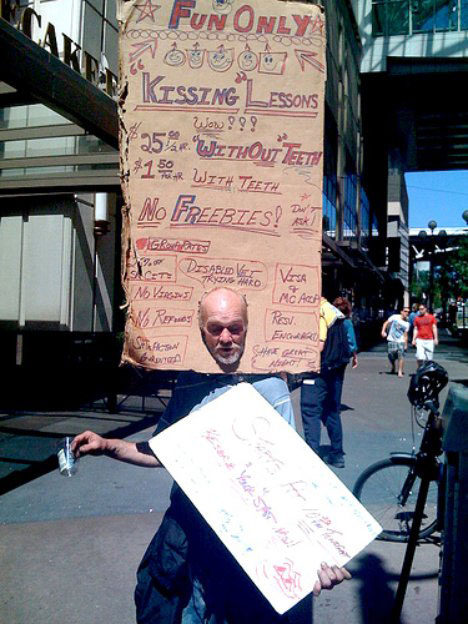 This man is a true homeless trailblazer! For starters, the man sports a new and original way to advertise his homelessness, around his head! Now if that doesn’t get your attention as you stroll past, nothing will! Secondly, his supposed service is quite unique: Kissing lessons by the house! His rates are reasonable, $25.00/hr without teeth, and only a $1.50/hr with teeth! Look closely and you’ll see that this man apparently accepts Visa and Mastercard as well! 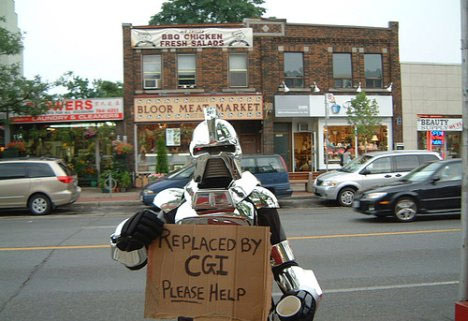 This homeless man represents a snapshot of the current American film industry. In his day, he was the star of the show! As a space traveling, evil battling cyborg, he was awed by audiences across the country and was offered contracts from here to Hollywood. Times have changed, and today 3-D modeling programs have rendered this talented borg broke!

These 11 bums prove that there can indeed be beauty (and comedy) in struggle.