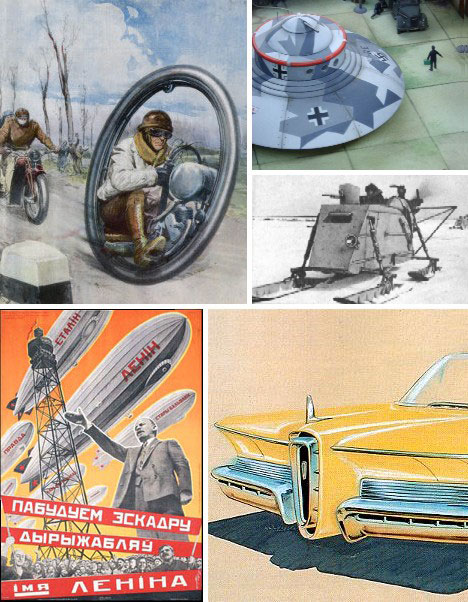 Concept cars, dream machines and technology-packed prototypes give us hints of what the future holds for bikers, drivers, sailors and flyers – many have even gone into production little changed from their showpiece status. Here are 15 that have not, though they live on in our imaginations. 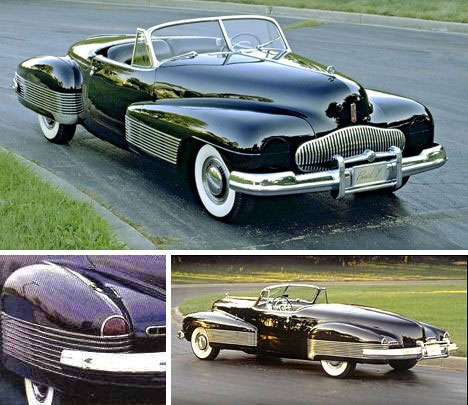 Arguably one of the first concept cars worthy of the name, the 1938 Buick Y-Job was a ray of bright sunshine beaming through the gathering clouds of war. Longer, lower and wider than anything the US automakers had ever sold before, the Y-Job also boasted advanced technology that, along with its swoopy good looks, would appear on many of GM’s most memorable post-war offerings. Only one Y-Job was made… to which we have to ask, Y? 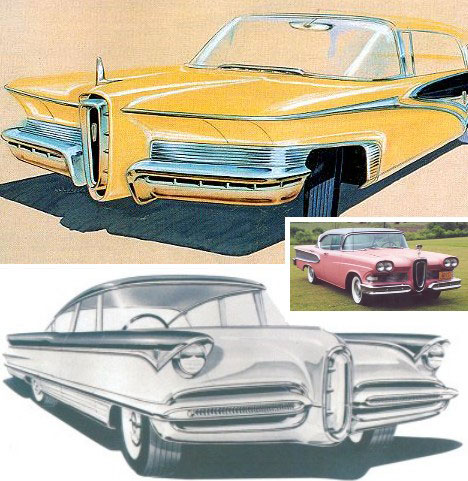 (images via: Blue Oval Forums and How Stuff Works)

The 1958 Edsel is the poster child for corporate failure. After tantalizing the public with a massive marketing campaign over many months, Ford finally delivered an over-achieving understatement. The Edsel wasn’t really that bad, it just wasn’t what people were led to believe. Perhaps if Ford’s designers hadn’t surrendered to the bean counters things would have worked out differently. 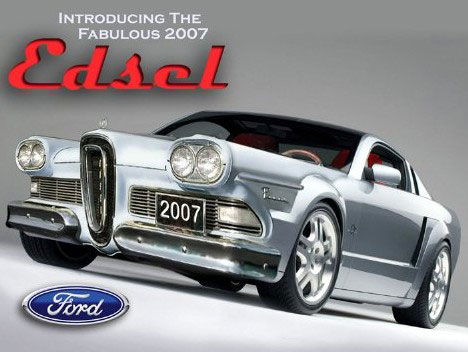 Then again, perhaps it’s better to let sleeping dogs lie; Ford has enough troubles as it is.

Highways of the Mind 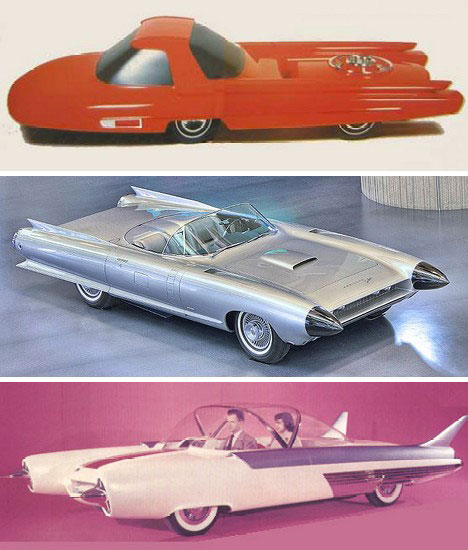 Early concept cars were much wilder than those of today yet still created a real sense of possibilities for the future. Above are just a few of these magnificent dream machines that flew off designers’ drawing boards and into our collective imaginations. The red cruiser topmost, it should be noted, is the Ford Nucleon… which was to be powered by an on-board nuclear reactor! Not quite “Mr. Fusion” but can you imagine the high-speed crashes? 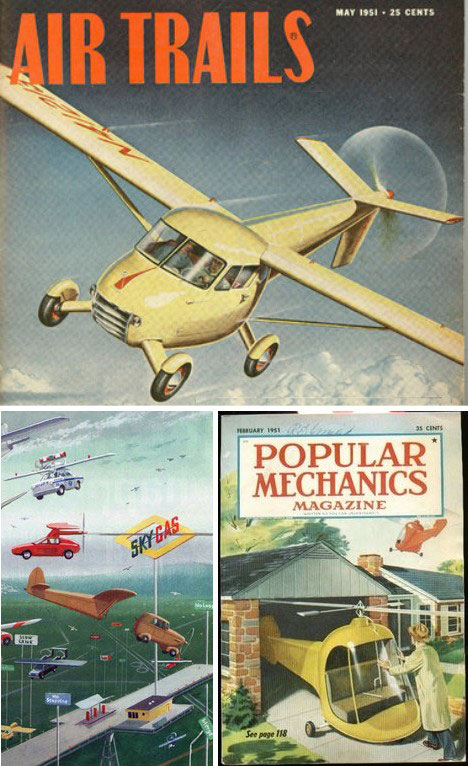 Back in the Fabulous Fifties, anything seemed possible and with production cars looking more and more like 4-wheeled jets, the next step was obvious: actual flying cars! No need to worry about traffic issues, all that mundane stuff will be worked out in due time… one would hope. 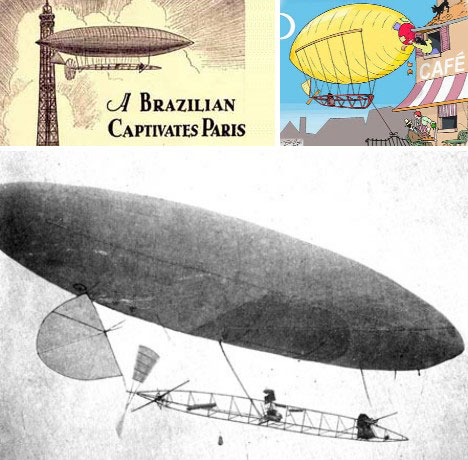 Band name brainstorming and Mythbusters lead foil balloon-making aside, the Personal Airship was once everyman’s dream ride. One man in particular, Brazilian aviation pioneer Alberto Santos-Dumont, actually built a working model he used as his very own airborne “car” in brass-age Paris. 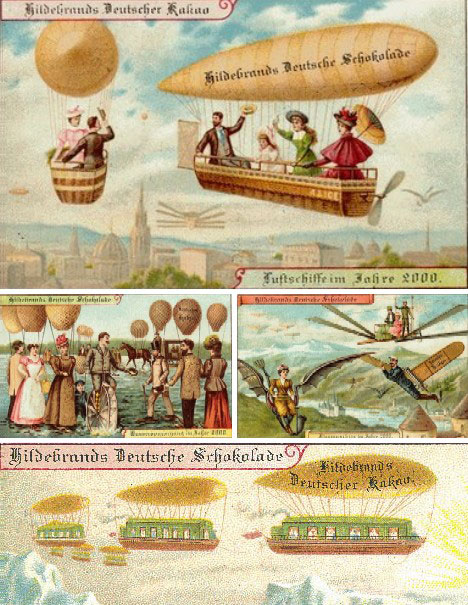 A German chocolate company named Hildebrands of Santos-Dumont’s time was so sure airships were going to be the minivans of the future, they issued a series of turn-of-the-century postcards illustrating the brave new world of 2000! 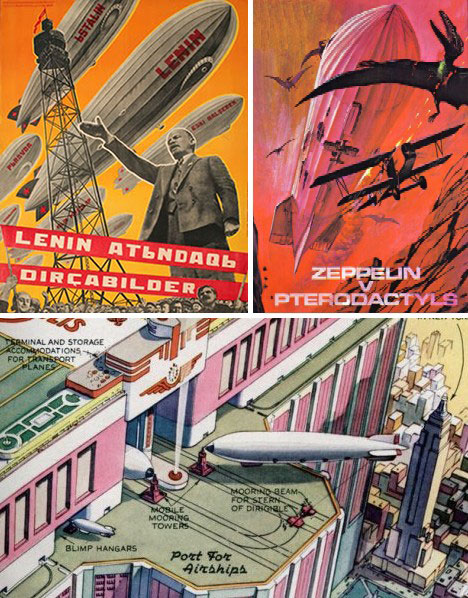 After the Zeppelin concept had proved itself and notwithstanding the 1937 Hindenburg disaster, visionary designers foresaw all things bright and beautiful for bigger and better airships. Others pushed the envelope past bombastic into the realm of the bizarre. 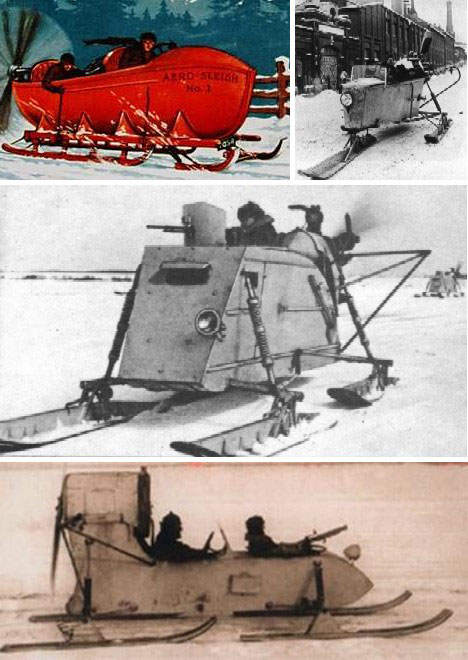 (images via: The Propeller-Driven Sleigh and Oobject)

Snowmobiles have a little-known history that goes back nearly a century. Canada and Russia (naturally) pioneered what later would be known as the Ski-Doo, with the Soviets crafting a number of different armed aerosleds that were used in the 1939-40 Winter War with Finland. 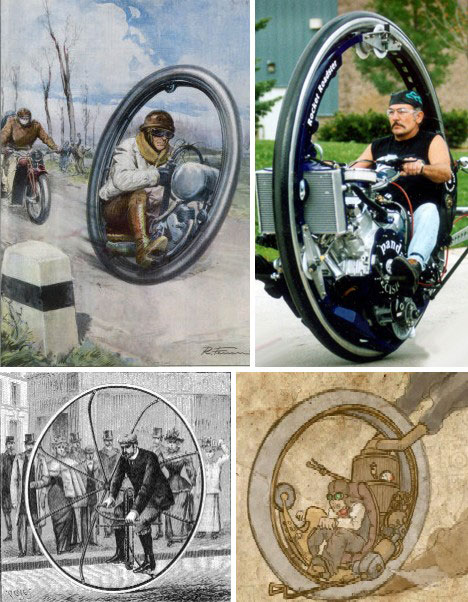 (images via: AllPosters and Steam Punk)

Bicycles are coming back into style, partially as a reaction to the hype about Global Warming, and some very futuristic models have attracted attention. Flash back to a time when bikes pretty much had the roads (such as they were) to themselves and you’ll also find some very forward-thinking designs. One of the most interesting is the Monocycle, basically a big wheel one sat inside. Wonder why it didn’t catch on? It most definitely works – monocycles (not unicycles) can be bought at several retail stores.

Here’s a short video of a motorized monocycle in action:

Tanks for the Memories 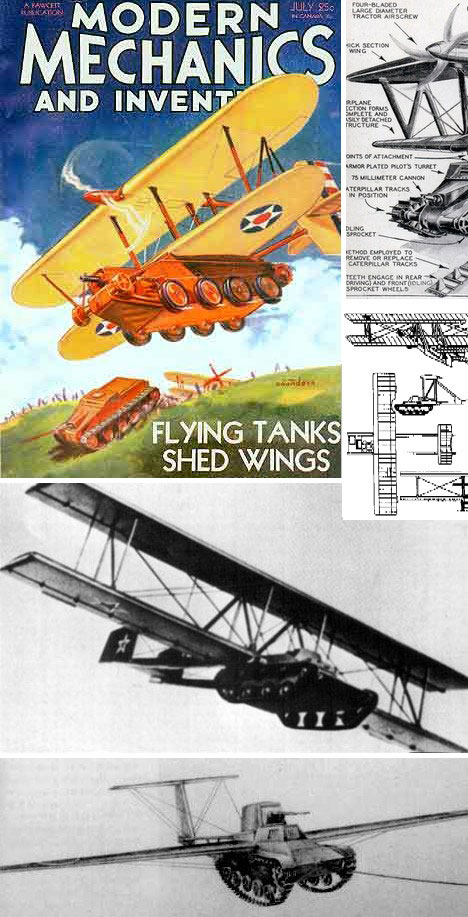 In the interwar era (1919-1939) a number of odd designs were penned that seeked to amalgamate the two most promising military technologies: the airplane and the tank. The results were what might expect for a flying tank – and definitely looked much better on paper. 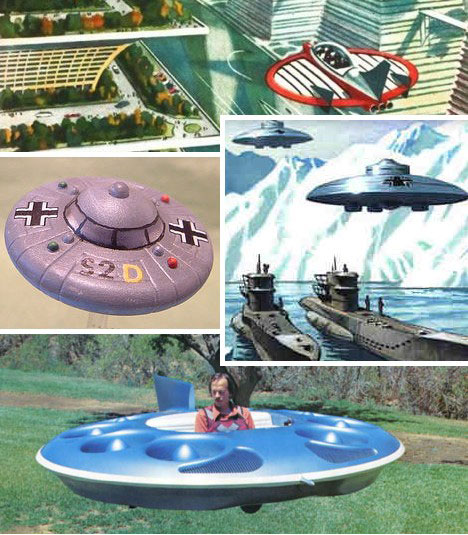 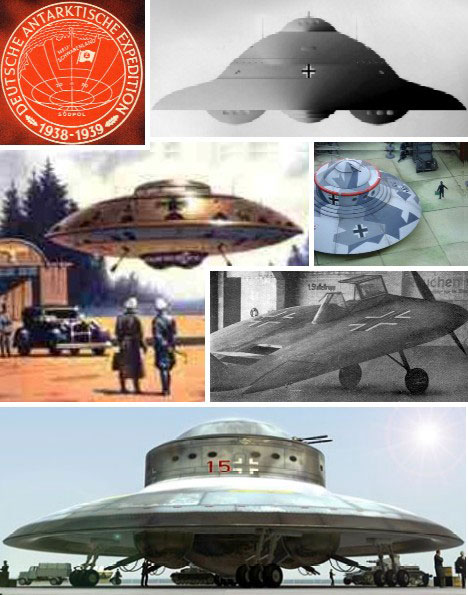 (images via: WW2Aircraft and Nazi UFOs)

Here are a few more Nazi saucers, an integral component of an odd mythos that includes a secret U-boat base in Antarctica. An actual American mission led by Admiral Byrd, Operation Highjump, was conducted in 1946 with the stated purpose of mapping the Antarctic coastline. According to conspiracy theorists, however, it was an unsuccessful effort to eliminate the Nazi sub & saucer base at “New Berlin”.

As unusual as these retrofuturistic vehicles seem, it’s likely their designers would be even more amazed by today’s real modes of transportation… well, not counting the flying saucers.