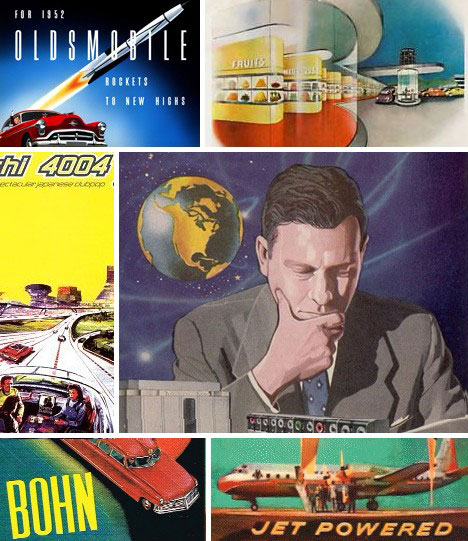 These 15 retrofuturistic ads showcase one of advertising’s most time-tested traits: convincing the target market a better, brighter future can be theirs TODAY – once they purchase this must-have product. Is the world we live in really as “new & improved” as we were led to believe?

Waking Up to a New & Improved Day 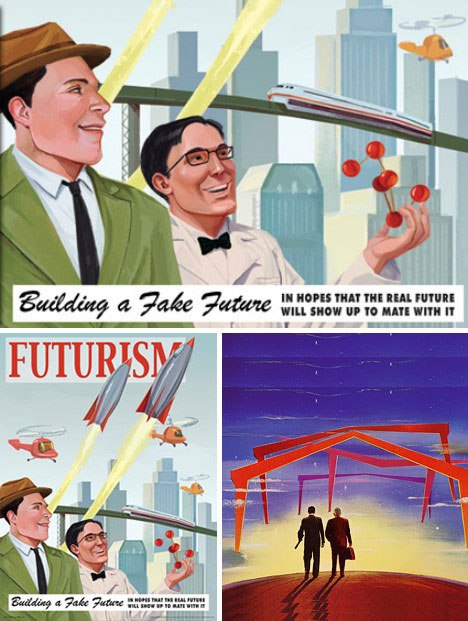 (images via: Topatoco and Plan59)

Evoking the image of better days to come must have been an effective message for advertisers past. Even the word “new” is charged with extra meaning: however well your old widget performs, a new one MUST be even better! The parody ad above (top) plus the pair beneath take great delight in saluting retrofuturism’s undeniably appealing sense of style. 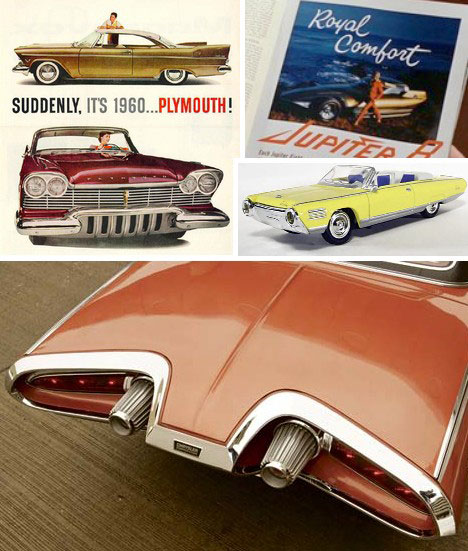 (images via: Staten Island Notebook and World of Carz)

Cars, more than any other product, have been flogged to the public using the whip of futurism. Don’t just keep up with the Joneses, leave ’em choking in your dust! Plymouth’s bold “Suddenly it’s 1960!” campaign on behalf of the trim, finned 1957 line is a case in point – though the ads (and the cars) didn’t age well. Even so, we can just bet Chrysler wishes it was 1960 now. Just below “Christine” we have the 1964 Chrysler Turbine Car, which though genuinely futuristic, was neither advertised nor sold. 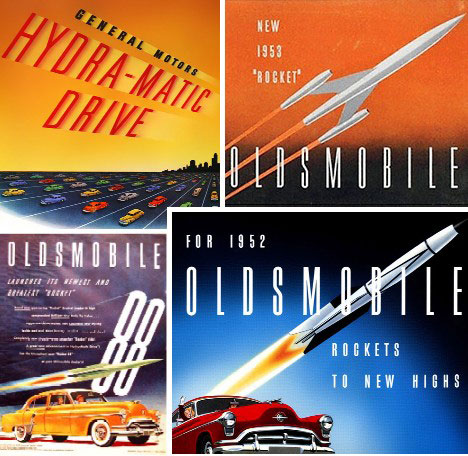 (images via: Museum of Childhood and Plan59)

Retro-style auto ads reached their zenith in the 1950s. The auto industry’s optimism was justified: new technology, bold styling and virtually no competition painted a picture as rosy as the hues in the above images. GM’s Oldsmobile led the way forward – and upward – with a hugely popular series of ads extolling the powerful Rocket V8 engine.

The Future is Fin-tastic! 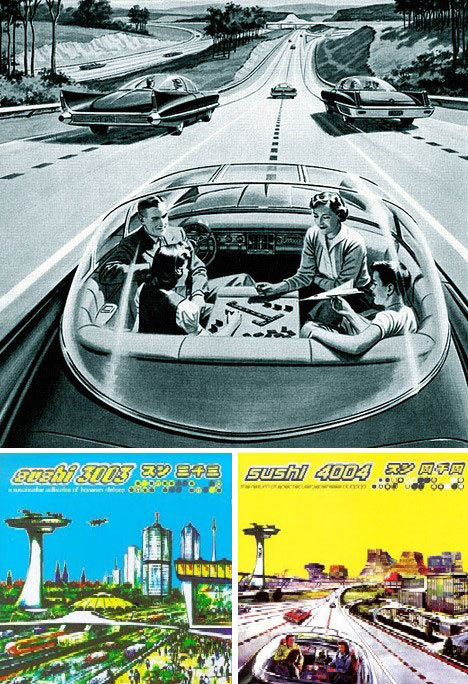 (images via: Scratchskunk and Somchai)

Wonder why those Fabulous Fifties chromes-mobiles looked so spacey? They not only had to keep up with the exciting times at the birth of the Space Age, they also had to match some of the wildest extrapolations of the era’s artists.

Airs to a Rich Tradition 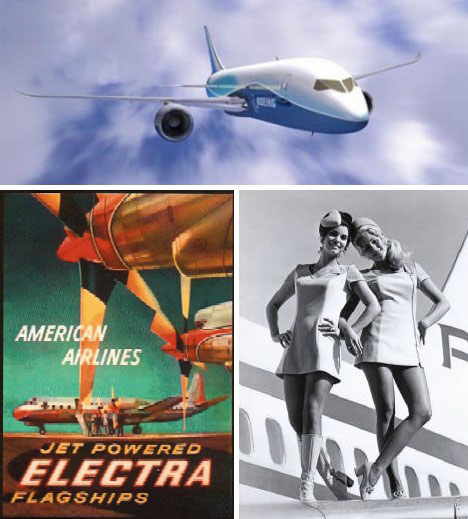 Air travel was futuristic from the first and in many respects remains so, even though it’s been over a century since the first rickety aircraft took to the friendly skies. Until some type of Star Trek transporter is developed, air travel will remain the fastest way to get around on Earth. That, by default, makes it tomorrow’s way to travel today.

(images via: Pointless Banter and Manolo for the Home)

Was 1953 really that long ago? It sure was – and now we know, engineers should stay in the lab and leave the advertising to the marketers. Into the darkness some light did shine, however, as illustrated by the 1948 ad for the Dishmaster. Looking more like a Hudson hood ornament than a kitchen faucet, the Dishmaster made dishwashing so much fun even the Man Of The House was happy to pitch in! 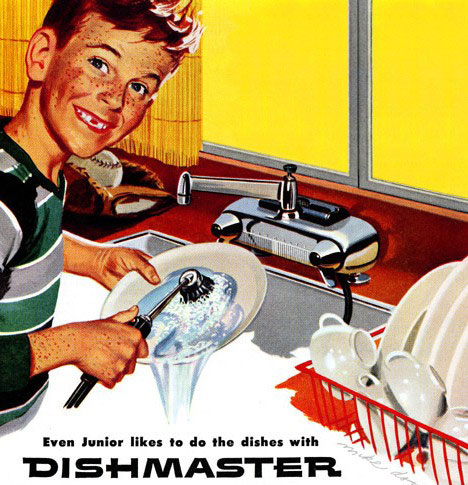 Even “Junior” lends a hand… though he’ll bail if you keep calling him that. Then again, the lad does look excited though that may have something to do with the cluster of coffee cups in the drying rack. 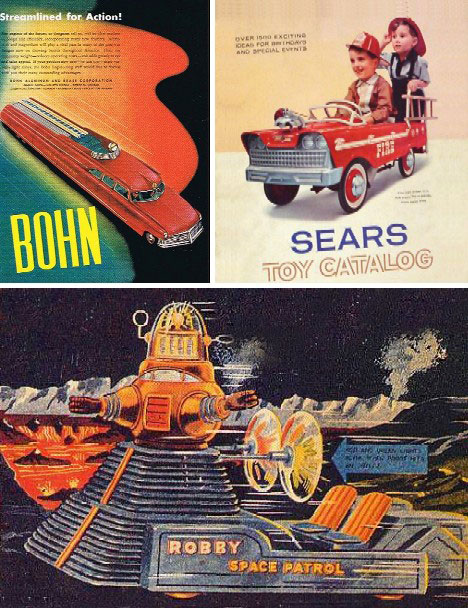 Toy ads of the past often sought to grab a child’s imagination, and what better way than to foresee the fantastic future they will one day grow into. The Bohn firetruck ad (above, left) dates from 1945.

Cuts to the Bohn 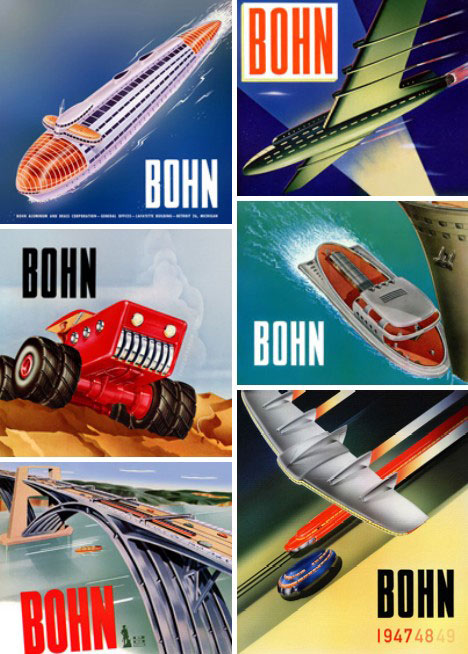 (images via: Plan59 and Veerle’s Blog)

Above are some other Bohn ad illustrations. What’s most incredible about these artworks is that most were created in the mid to late 1940s, thought by most people to be a somewhat drab period overshadowed by the horrors of World War II. Bohn decidely looked on the bright side by putting the recent past behind and focusing intently on a brilliantly colored, sleekly streamlined future. 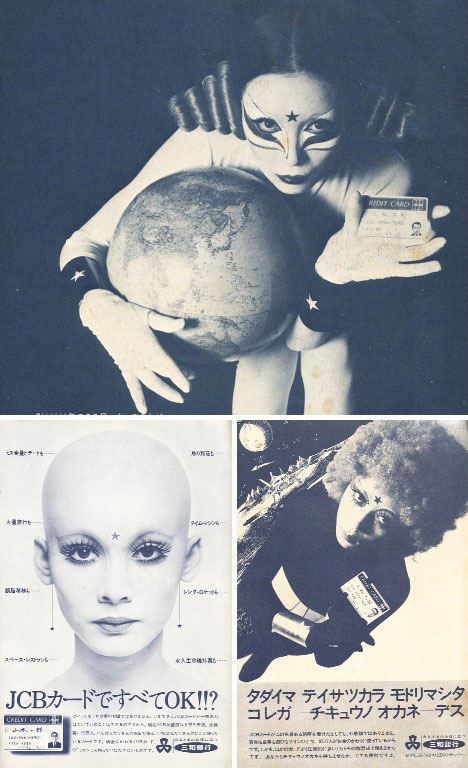 Japan’s Sanwa Bank evoked a cashless future with a famous series of full-page magazine ads for the JCB credit card that ran in the early 1970s. Interestingly, Japan is well on its way to becoming a cash-free society today, though it’s cellphones that are taking the place of notes & coins. As for Sanwa Bank, they made it to the next millennium but just barely, merging with two other large Japanese banks in the year 2001. 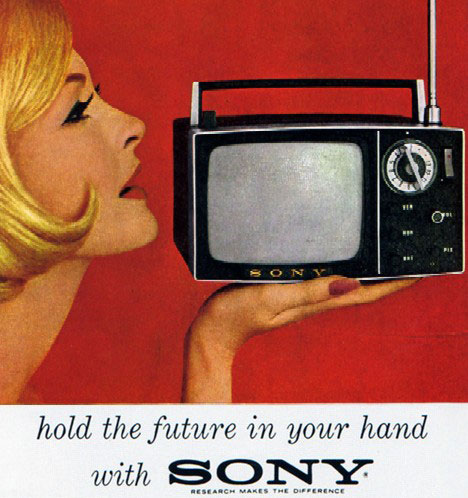 This vintage 1960s SONY ad from Woman’s Day manages to look forward while keeping a firm grip on the swingin’ sixties. SONY’s products had a reputation of being cutting-edge, even before the Walkman, Watchman and Discman and the company obviously knew a winning theme when they saw one. 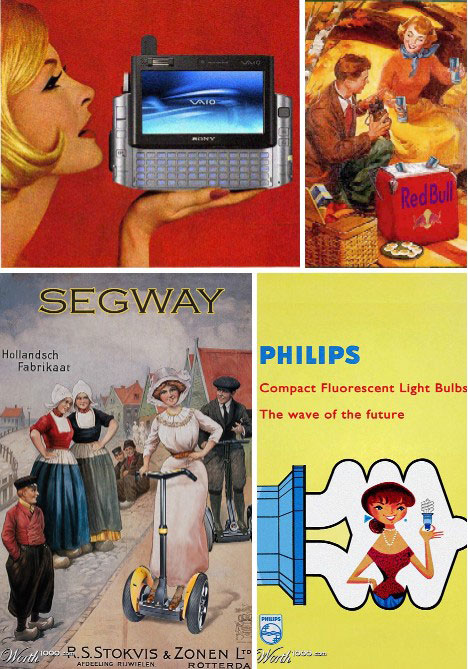 The mad photoshoppers over at Worth 1000 took on retro ads in one of their popular contests, and the results could easily fly as actual ads now that all things retro are in style. Note the SONY television ad, updated to feature one of the new VIAO portables.

Sale of the Millennium! 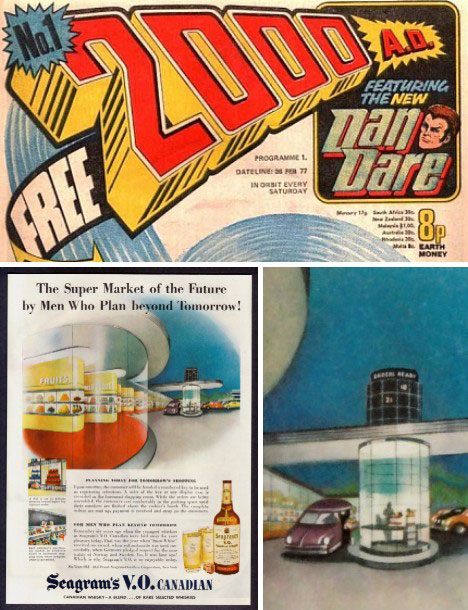 (images via: Forbidden Planet and eBay)

Looking ahead 55 years from 1945, truly anything seemed possible – even probable! The Seagram’s whiskey ad above shows just what a few shots of booze will do to one’s imagination while the British “Dan Dare” comic image just above it crystallizes the excitement and exoticism of Y2K, even as recently as the late 1970s. 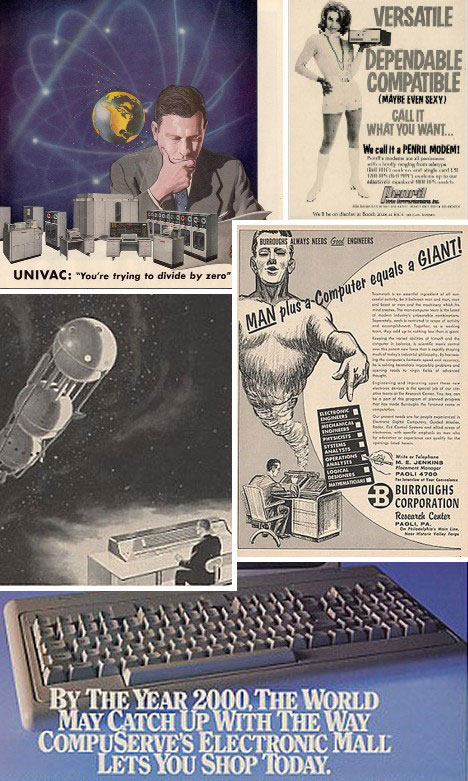 Computers had a futuristic aura from the first, so advertisers really did push the envelope that much in their ads. The selection above, ranging from the fifties through the eighties, gives a glimpse into the minds of computer marketers as they sought to make their product seem essential to a niche that, while small originally, showed the promise of great expansion.

This SPACE for Rent 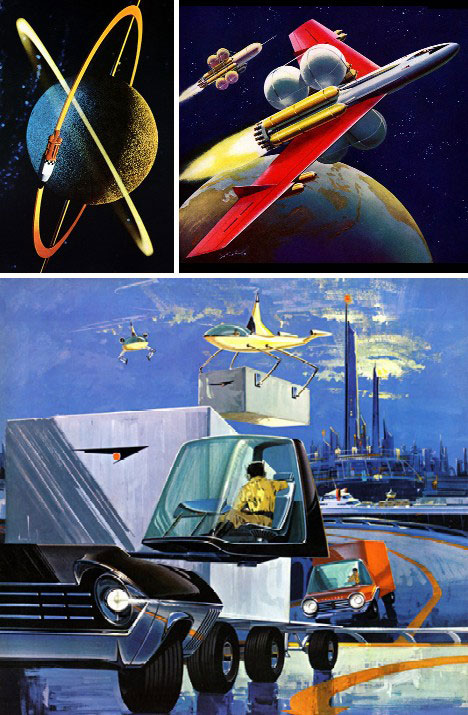 Space, the final frontier… but how do advertisers advertise the future futuristically? The above images give some indication, for example Bell Aircraft (top left) equating their 1960 Agena rocket with the structure of the atom and just to the right, a 1958 ad from Vanadium Corporation of America showing how “alloys bring the future closer”. Below is a 1963 image used by Midland-Ross Corp. to imagine trucks of the future. 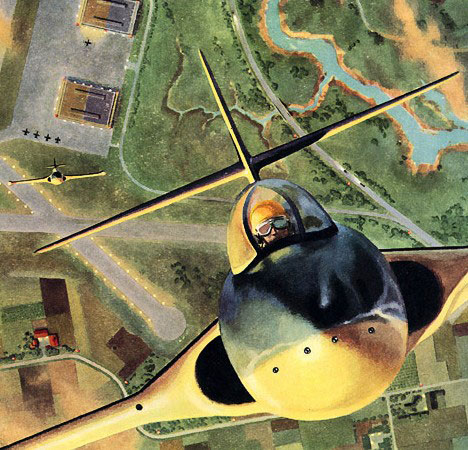 Closing out with a jet-powered boost, the above 1953 ad titled “PRECISION born of skill” injects excitement into Bower Roller Bearings – a tough call if ever there was!

Overall, it’s easy to see why retrofuturistic style was so effective then and so appealing today. Maybe it’s a myth to look back at the so-called Good Old Days… back then, society was looking ahead to where we are today!