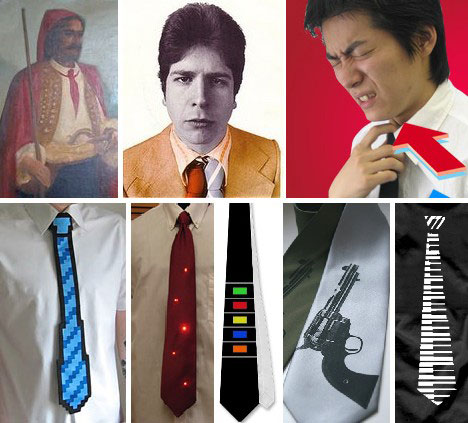 Neckties… every guy’s got at least one, few guys enjoy wearing them. As an essential fashion accessory for business and formal occasions yet with no real function of their own, the necktie is the bane of many a working stiff. Nice to know that efforts are being made to add function – not to mention fun – to the natty noose worn every which way but loose.

Croatia’s Gift to the Working World 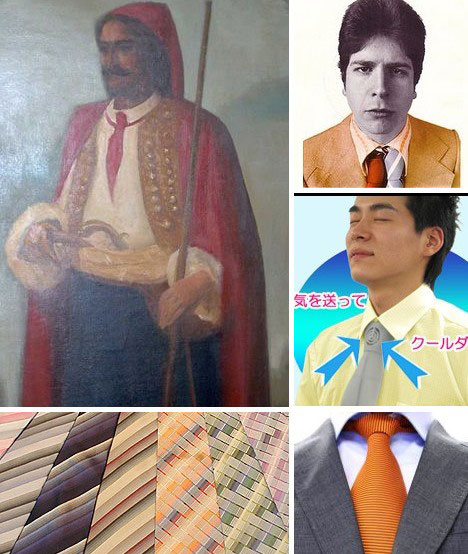 (images via: Answers.com and It Should Have Been A Hit)

A little background before we begin. The modern necktie isn’t really all that modern: we owes it all to Croatian mercenary soldiers who fought for France 350 years ago in the mid-17th century. When King Louis XIV reviewed his troops, the knotted silk neckerchiefs worn by the Croats caught his eye and before long he was wearing them himself. Naturally the King’s followers followed suit and added to their suits, a “cravat“. About that… Croats call their land Hrvatska and themselves, Hrvati. The French word for necktie is “cravat” and you can connect the dots on your own. So, before you blame the Croats for choking you every working day, be glad Louis didn’t hire Greek mercenaries instead – we’d all be wearing big fluffy balls on our shoes.

You Have Cake on Your Necktie 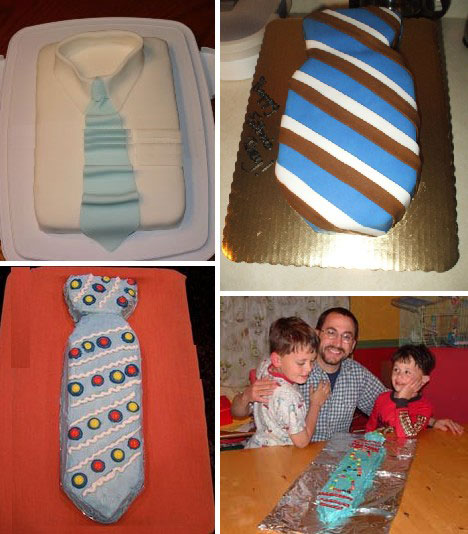 The fad for neckties soon spread throughout France but silk was expensive and the lower classes often had to do without. When advised of the peasants’ plight in 1789, the Empress Marie Antoinette was reported to have said, “Let them eat cake”… and the Necktie Cake was born! OK, that’s totally bogus but there ARE necktie cakes – and can you think of a better explanation for them?

Fashion is the Key 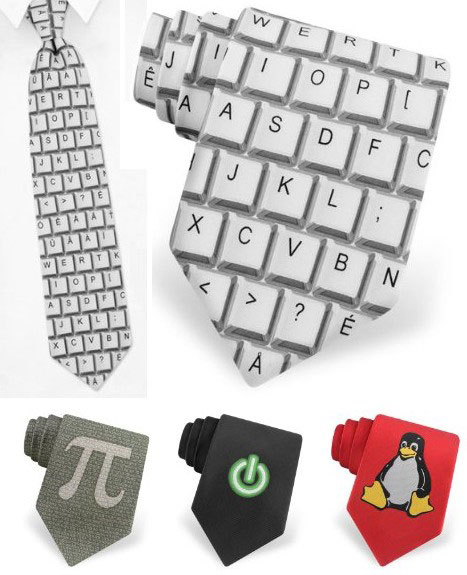 Neckties have some association with nerdiness so it’s no surprise that there are more geeky ties around than you can shake your Wii-mote at. Some of the geekiest come from – no surprise – Mr. G33K. In addition to the klassy keyboard microfiber tie above, Mr. G33K offers ties in PI To The 50th Decimal, Power On Button, Robots and Linux’s iconic penguin… which would go great with a tux. 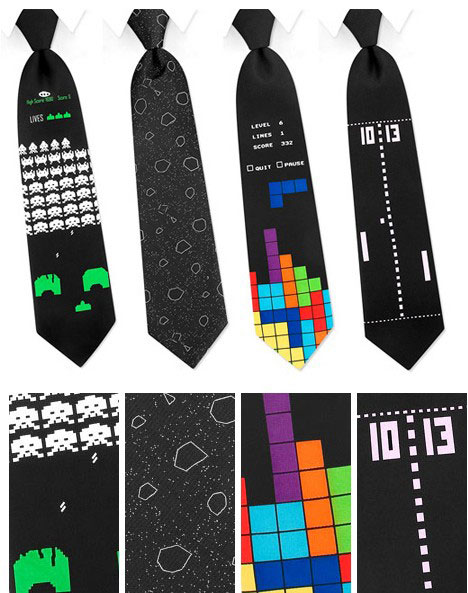 Success in the conference room or on the computer screen is the goal of any competitive guy, even when the game is as easy as Pong. Take a trip back to those glorious 8-bit days with the above selection of gaming ties. Space Invaders, Asteroids, Tetris and Pong were arcade fliers back in the day but even if you’re into Arcade Fire these retro threads will keep you looking cool. 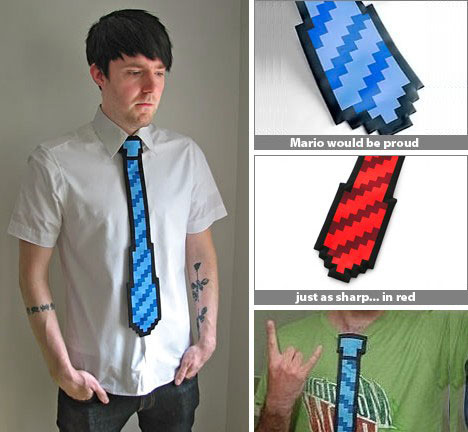 Think your office attire isn’t quite edgy enough? Thinkgeek has something for that – the 8-bit necktie. It’s one step beyond neckties that only display 8-bit motifs; the tie ITSELF is rendered in the classic, pixilated 8-bit style last seen on your Atari 2600 before you spilled that can of Pepsi on it. Don’t know how to tie a tie? No problemo – the 8-bit tie is a clip-on (classy, indeed) which expands its versatility to almost any wardrobe item. Even t-shirts. 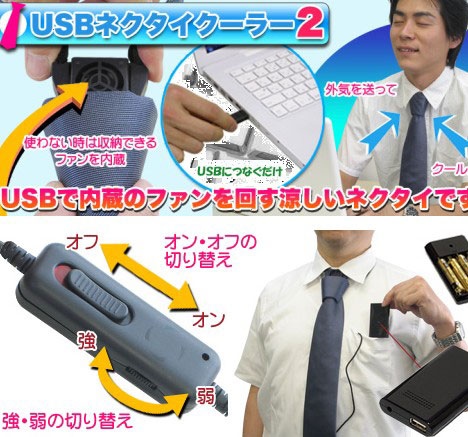 (images via: Thanko and InventorSpot)

This well-intentioned attempt to add functionality to the necktie has an unexpected downside: it subtracts the sartorial style and elegance that is the main reason for wearing a necktie in the first place. At least the wearer won’t get hot under the collar when his boss gives him the evil eye and his co-workers whisper and point behind – and in front of – his back… that’s because the USB Cooler Necktie from Japan’s Thanko has a built-in fan powered by a computer’s USB port. After a day wearing this thing to the office, it’s the only fan he’ll have left. 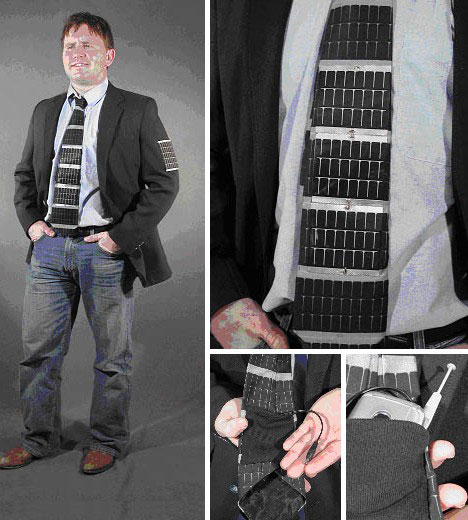 Here’s another stab at necktie functionality that’s less likely to get the wearer stabbed. Tasered, maybe, since wearing the Solar Powered Necktie to any airport will have the TSA on your case faster than if you had a wick sticking out of your shoe. The solar-powered tie (and an even worse looking sport jacket) were crafted by researchers at Iowa State University who were evidently bored with dreaming up new uses for corn. Since their stated goal is to invent a fabric that integrates photovoltaic (light-converting) thin film cells in an “aesthetic” manner, one can at least that they have a ways to go yet. One final note – the tie has a pouch in back that cleverly holds a cellphone, a MP3 player or a small IED. 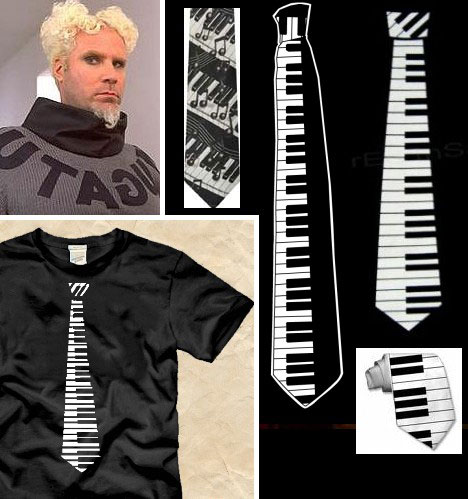 If you’re the type who needs 88 fingers (not including your own) to tie a tie, then the classic Piano Key necktie is just what you need. It’s not any easier to tie than a regular necktie but once you DO get it right, it plays very well. Many have claimed to be the originator of the Piano Key necktie, most notably crazy-pill-popping fashion designer/megalomaniac Mugatu, but let’s just be glad they did. And make sure you tuck your tie out of the way before you tinkle the ivories. 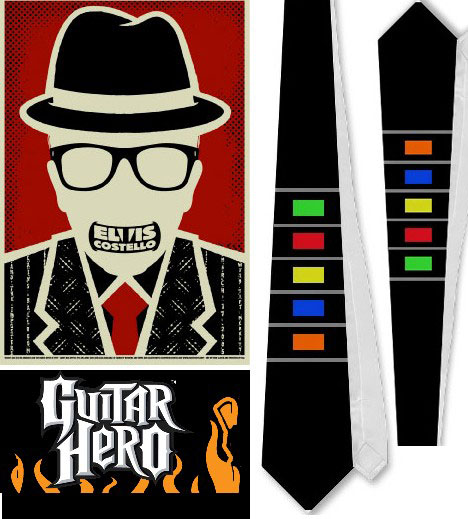 (images via: Technabob and Toddslater.net)

Staying within the musical vein, neckties and rock stars haven’t been seen in the same room since Elvis Costello put out This Year’s Model but that’s about to change thanks to the Guitar Hero Necktie. Though not connected in any way with the astoundingly successful GH franchise, the Guitar Hero necktie walks the walk but doesn’t talk the talk – if you want sound, you’ll either have to hum along or use your free hand to play Hawaiian nose guitar. True GH fans can wear it along with the Guitar Hero Scarf to show their love. 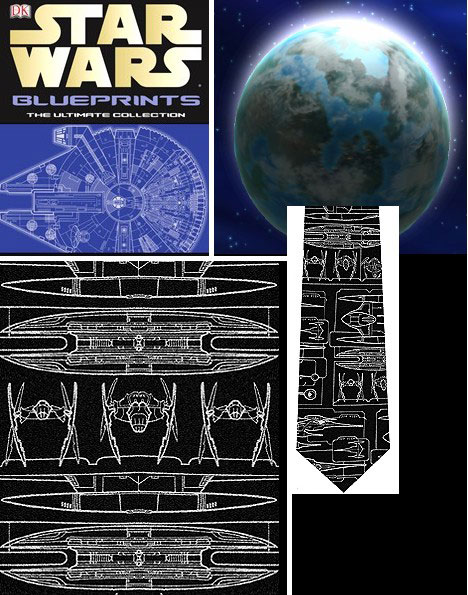 Star Wars ties are a dime a dozen but this one stands out: the Naboo Blueprint black necktie. The pattern is subtle from a distance and even up close isn’t obviously a Star Wars reference. True fans and hardcore geeks, on the other hand, will be VERY impressed. If geek love’s what you’re after, the Naboo Blueprint necktie will bring ’em in faster than Boba Fett.

Tieing Up the Circuits 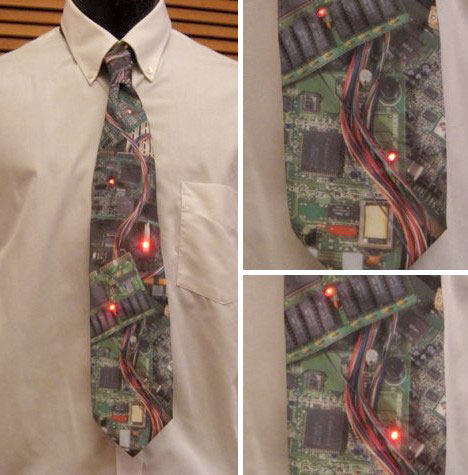 (images via: Mark Pascua and Enlightened)

Techies aren’t known for wearing ties but when the occasions presents itself, well, so do they. An ideal choice would be the Power Tie, a printed patterned circuit board necktie that comes in3 different fabric colors with 5 embedded flashing LEDs to match. The tie is a neckband style – sort of halfway between a normal knotted necktie and the dreaded clip-on. The manufacturer also makes flashing LED bow ties, just in case wearing a circuit board necktie doesn’t feel quite ridiculous enough. 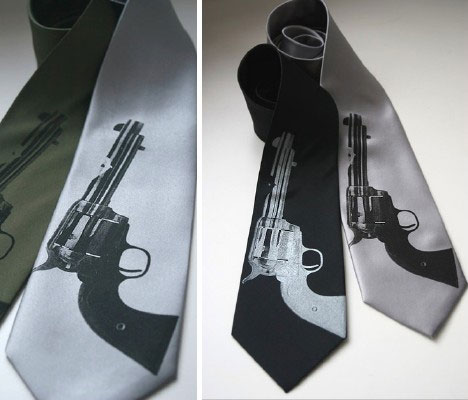 (images via: ThisNext and Cyberoptix)

The cleverly named Aw Shoot necktie lets you pack heat, look cool and show your happiness in the form of a warm gun. The distributor, Cyberoptix, offers this NRA-pleasing necktie in your choice of silk or slightly less expensive microfiber with a number of color combinations for each. Shipping options include delivery in a wood box… are they trying to tell us something? 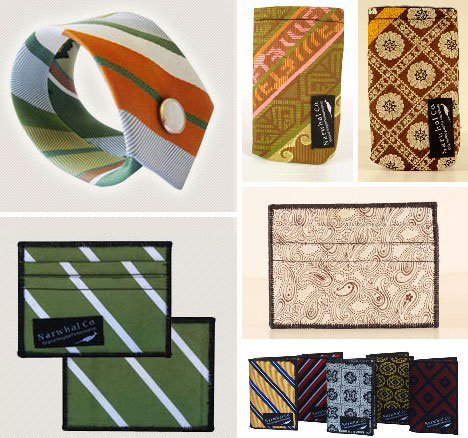 Love ’em or hate ’em, neckties look to remain a vital component of male (and occasionally female) wardrobes for the foreseeable future. That begs the question: what happens to worn out, unfashionable and/or discarded neckties? At Narwhal Co., previously enjoyed neckties are reborn as wallets, iPod & iPhone covers, even curious “wrist wear” secured with a pearly button off an old cowboy shirt. Some of the patterns may seem somewhat old fashioned but what do you expect – they’re made from old fashions. Narwhal has a good thing going here, plus by recycling all those awful ties received by past generations as Father’s Day gifts they’re keeping the nation’s landfills from bursting at the seams.

Knock it if you must; knot if if you can – the noble necktie will be restricting our airflows for some time yet. Look at the competition: bow ties, bolo ties, ascots? The choice is clear: good bad or ugly, there’s no noose like good noose!