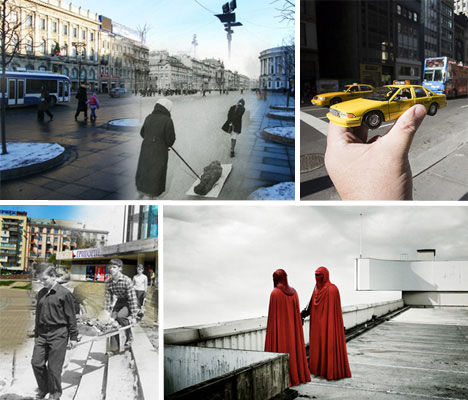 Using the techniques of superimposition and photo montage, photographers can blur the lines between past and present, reality and fiction, authenticity and imitation. Whether by manually holding up an object or photograph against a carefully chosen backdrop or using image editing software, these five imaginative artists have created alternately quirky and poignant images bringing together various urban worlds.

St. Petersburg, Past and Present by Sergei Larenkov 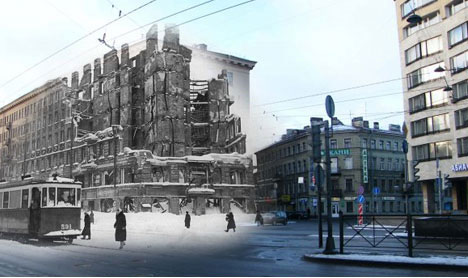 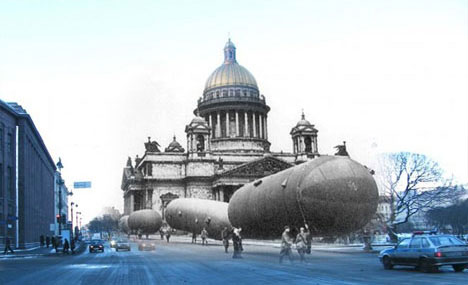 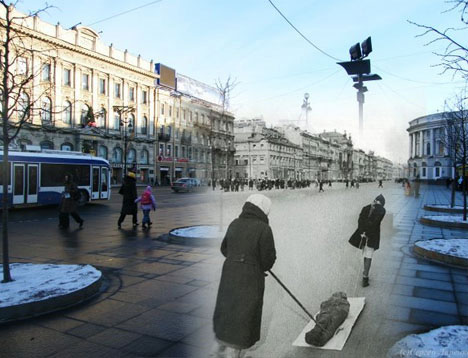 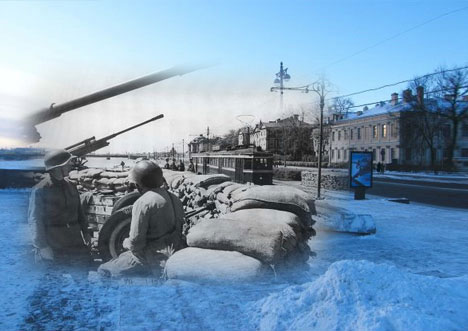 Amid the hustle and bustle of modern life in St. Petersburg, Russia, there are the ghosts of past events and perhaps none are so tangible as the Siege of Leningrad during World War II.

The Siege of Leningrad was an unsuccessful military operation by the Nazi powers to capture Leningrad, now known as St. Petersburg, from September 1941 to January 1944. During those nine hundred days, millions of people suffered from cold and hunger and many thousands died. Though Hitler’s plan to take the city failed, the two-and-a-half-year siege is still known as the most destructive siege of a city in modern times and the second most costly in terms of human lives lost.

In these haunting images by Sergei Larenkov, the harsh realities of life during the siege are juxtaposed with modern photos of the city to provide a glimpse of St. Petersburg’s dramatic past. Larenkov picked through archival images of the siege to find images that could be merged with present-day photographs, and the effect is compelling and eerie. 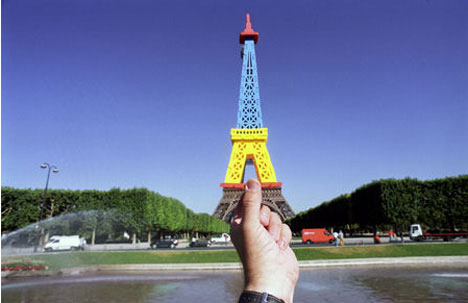 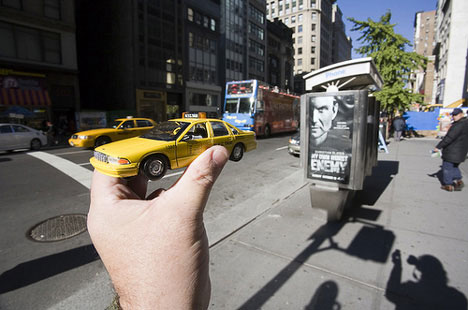 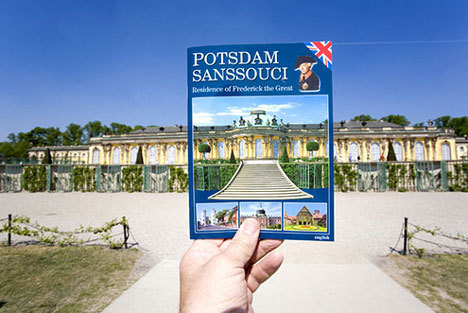 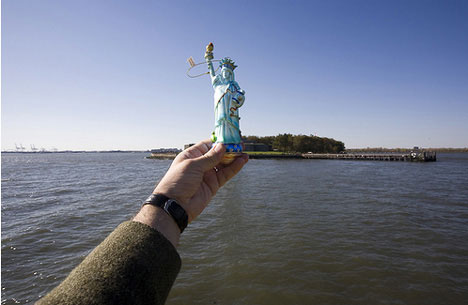 At first glance, you might wonder why in the world somebody thought it was a good idea to paint the Eiffel Tower garish shades of blue, red and yellow. Then you realize that what you’re looking at isn’t the real Eiffel Tower at all, but a small painted replica held in the landscape so that it seems to be a part of the background.

Michael Hughes takes cheap, kitschy souvenirs including figurines, key chains, pencil cases and postcards and holds them up so they blend in perfectly, blurring the line between the real landmarks and the replicas.  Hughes has been perfecting the technique since 1998 and has used it with the Golden Gate Bridge, the Gate of India, the Great Sphinx of Giza, the Tower Bridge and many other famous sites. His work has inspired amateurs and professionals alike to mimic the technique.

Looking into the Past by Jason Powell 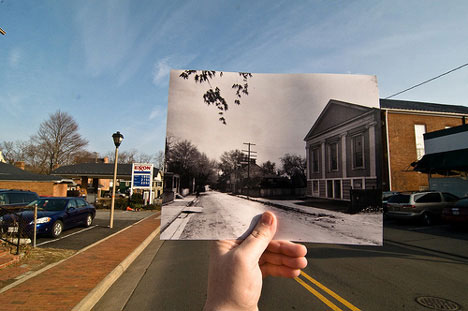 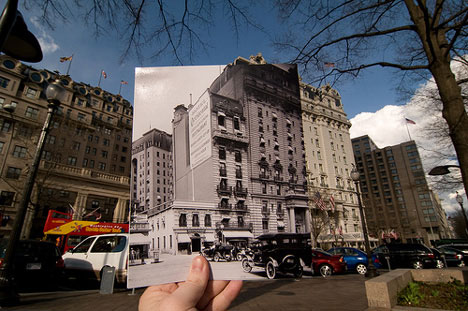 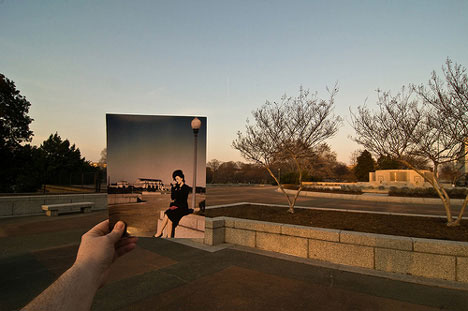 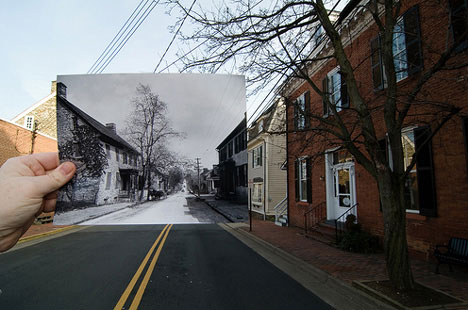 One of the photographers inspired by Michael Hughes is Jason Powell, who has adapted Hughes’ style using photographs instead of souvenirs. Powell’s technique is similar to Sergei Larenkov’s blended images of St. Petersburg, except that he manually holds each photograph up against the background to achieve a similar effect.

Powell, a history buff, found the old images at the Library of Congress, printed them out and set out to match them up with the same scenes today in places like Leesburg, Virginia and Ellicot City, Maryland. It often involves standing in the middle of the street and trying to dodge traffic while also meticulously lining up windows, sidewalks and telephone poles.

Powell’s series helps illuminate both the changes that have taken place over the decades, and the fact that many places are surprisingly well preserved.

Star Wars Toys Against a Modern Backdrop by Cedric Delsaux 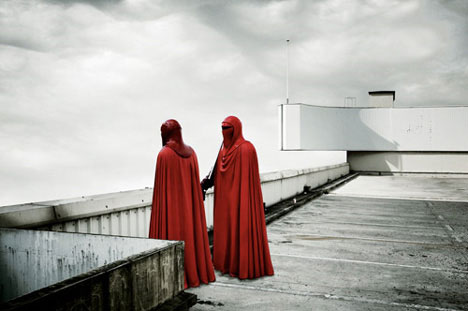 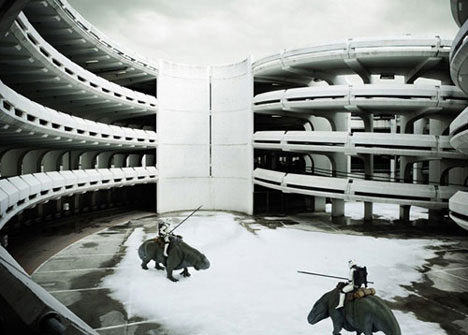 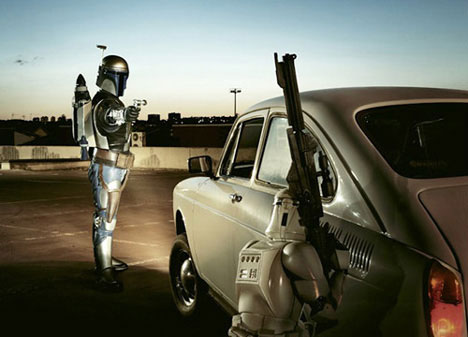 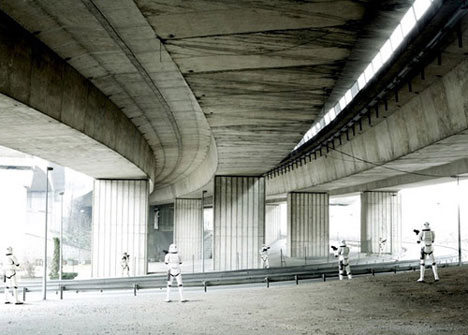 What if characters from Star Wars sprung to life in modern settings? French photographer Cedric Delsaux has created a series of images that look like real, full-size characters interacting in parking garages, on rooftops and beneath overpasses. But, these Storm Troopers and other characters are actually toys superimposed onto background photographs. 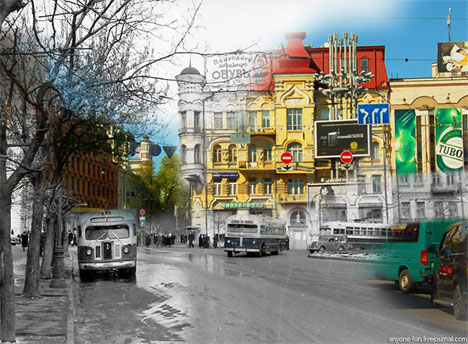 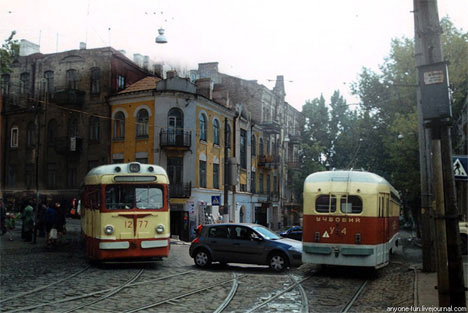 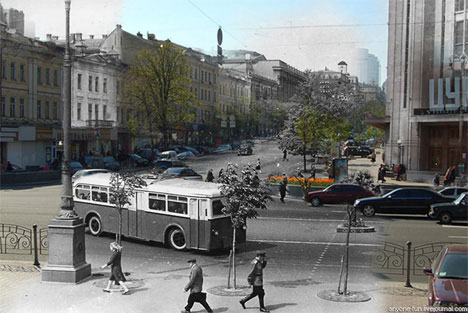 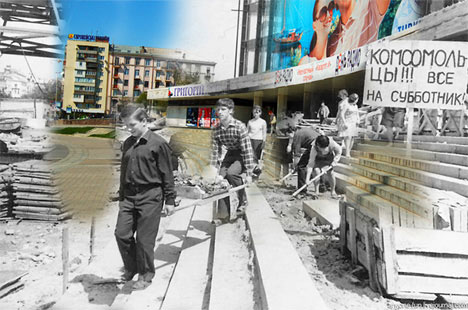 Kiev, the largest city in Ukraine, is one of Eastern Europe’s oldest with a long history of both great prominence and relative obscurity. The city enjoyed a period of prosperity in the late 19th century during the Russian industrial revolution, but suffered turbulence, famine and war in the early 20th century. It changed hands sixteen times between 1918 and 1920 and was damaged significantly in World War II, but despite this, it has managed to retain its rich cultural heritage.

These montage images celebrate Kiev’s past and present, blending photographs from as early as 1900 with modern photographs that show just how far the city has come in 109 years.