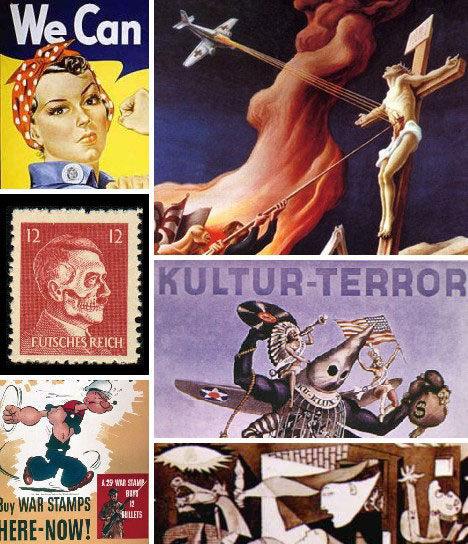 Propaganda has many purposes but paramount is its use to promote war and bolster a united home front. While most people have some acquaintance with their own country’s graphic propaganda – often absorbed into pop culture – that of the “enemy” is far less familiar and thus, somewhat jarring. This selection of wartime propaganda from friends and foes alike takes no sides; instead it seeks to expose the bombastic, jingoistic and prejudicial properties all propaganda has in common. 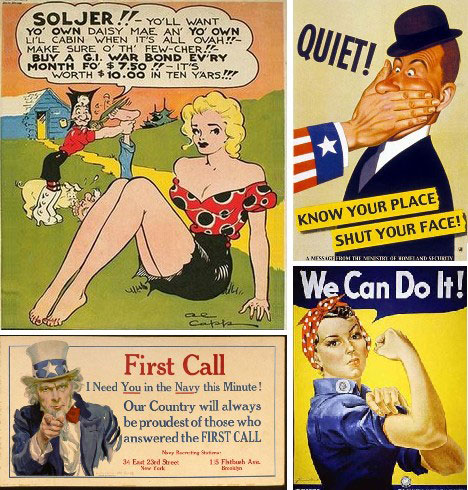 (images via: Looking Through The Lens and HubPages)

So-called soft propaganda is mainly concerned with exhorting citizens to join the armed forces and reminding workers of their important duties in munitions production. Iconic anthropomorphic symbols of American propaganda include Rosie The Riveter and good ol’ Uncle Sam. 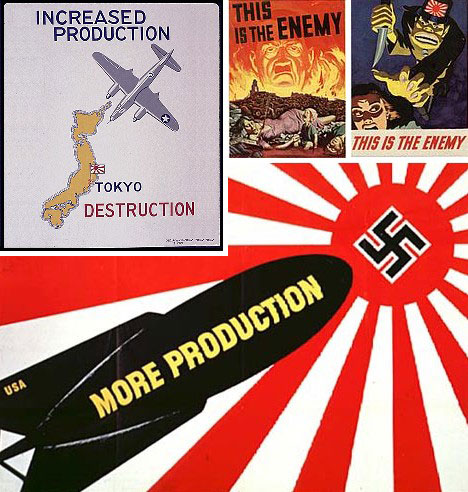 (images via: Looking Through The Lens and The Advertising Archives)

Wartime propagandists turn up the heat when the situation on the battlefield becomes desperate. The above propaganda images are stark and severe, reflecting the tone of the times. Less words and plainer imagery help drive home the all-important message: win at all costs!

Antichrist Of The Axis 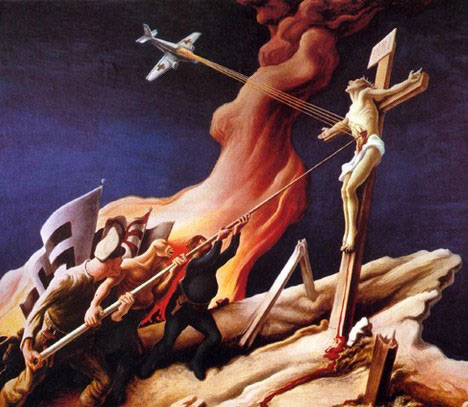 Beautiful yet bizarre, the image above depicts Germany, Italy and Japan killing Jesus Christ! American artist Thomas Hart Benton painted this stunning tableau, titled “Again”, in 1941 immediately following the attack on Pearl Harbor. The painting was one of Benton’s 8-part “The Year In Peril” series whose stated purpose was to awaken Americans to the dangers of fascism. 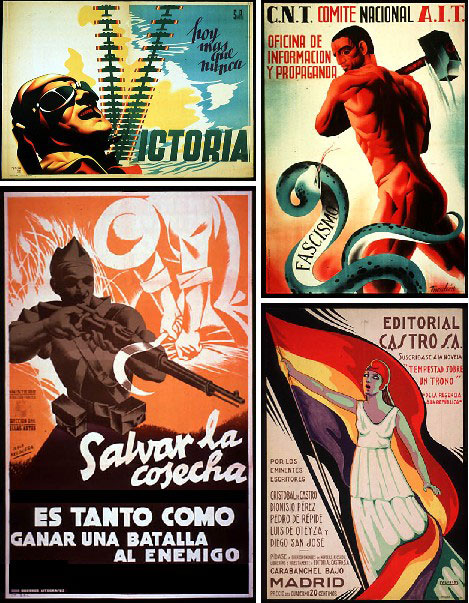 (images via: The Visual Front)

The Spanish Civil War that raged from 1936 through 1939 was one of the first modern wars to receive widespread international media coverage. Both sides; Franco’s right-wing Nationalists and the left-wing Socialist government put visual propaganda to good use in extolling their respective causes. Thousands of posters, many of them exquisite works of art, were produced by both sides during the course of the war.

Guernica: A Shout Against The Darkness 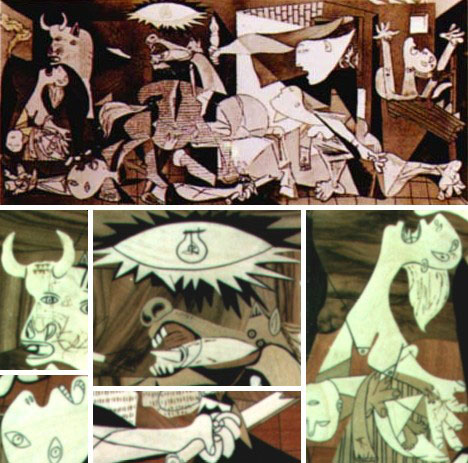 On occasion the line between graphic propaganda and genuine art is blurred, even broken – such is the case with Pablo Picasso’s modern masterpiece, Guernica. Painted in 1937 following the aerial bombing of the Basque town of Guernica by the German-manned Condor Legion, the immense (11.5 ft. by 25 ft.) painting shouts out against the horrors and injustice of war. The painting was commissioned by Spain’s socialist government following the bombing and was shown around the world, bringing attention to the Republican cause. 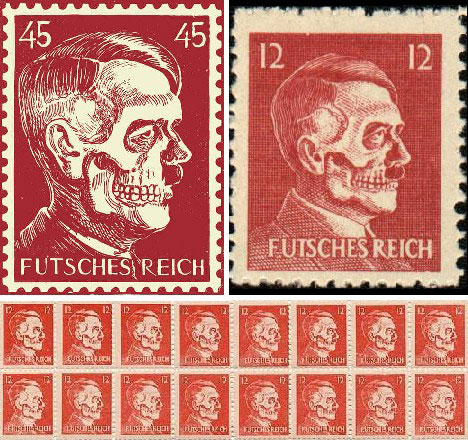 The wartime OSS (which later became the CIA) was involved in the creation of forged postage stamps which were delivered into Nazi Germany via leaflet bombs. As one part of Operation Cornflakes over one million stamps were printed showing Hitler’s face as a human skull. To fuhrer, er, further get the point across the lettering beneath these stamps was changed from Deutsches Reich to Futsches Reich, or “Collapsed Empire”.

Putting The Kibosh On The Kaiser 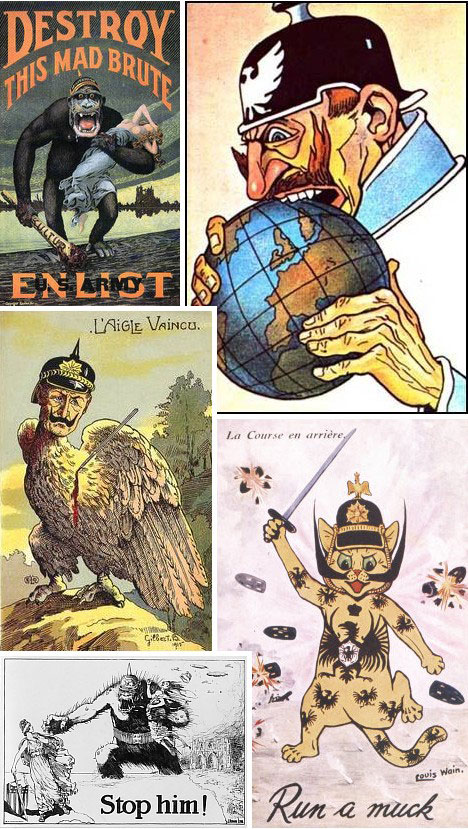 Second World War anti-Germany propagandists weren’t starting from scratch. A generation earlier, some surprisingly graphic posters made the rounds as allied governments sought to stoke war fever by demonizing Germany, especially Kaiser Wilhelm II. The French poster of the Kaiser trying to eat the world – and finding it too hard – is typical of the era. 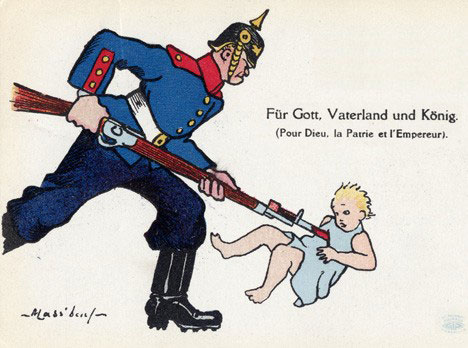 Depicting German soldiers for propaganda purposes was easy: simply combine some dastardly deed with a soldier wearing a spike-topped pickelhaube helmet. Though the pickelhaube was phased out in early 1916, it continued to be used as an identifying feature of Germany and/or Germans for propaganda purposes. This practice can also be questioned as the pickelhaube was used at times by soldiers in the service of Chile, Colombia, Mexico, Norway, Portugal, Russia and Sweden.

A Game Two Can Play 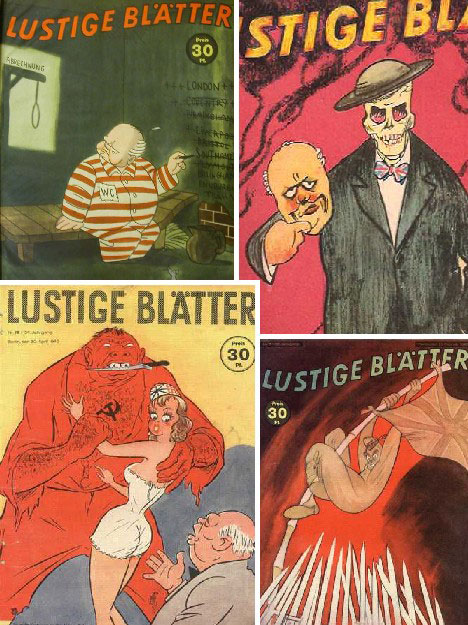 Germany was by no means silent when it came to propaganda – Nazi propaganda minister Joseph Goebbels did much more than just write Hitler’s speeches. The above images aimed at Churchill’s Britain come from Lustige Blätter, a popular German humor magazine. 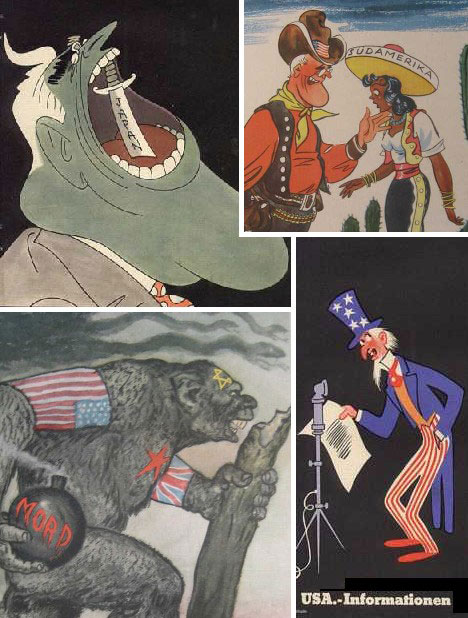 America joined the UK at war in 1941 and almost immediately joined her as a target of Nazi propaganda. Above are a small sampling, once again taken from the pages of Lustige Blätter. 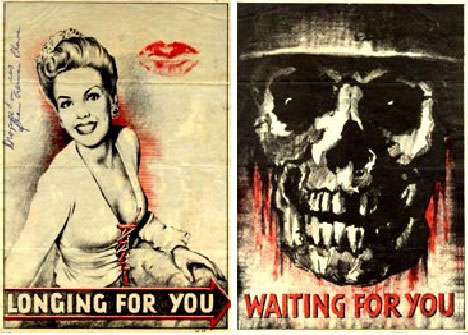 Another type of graphic propaganda was aimed directly at troops in the field. The German propaganda leaflet above was fired via rifle grenade into the American positions at Bastogne, Belgium, in December 1944 during the crucial Battle of the Bulge. Bastogne was where the commanding American officer, when presented with a German demand for surrender, famously replied “Nuts!!” 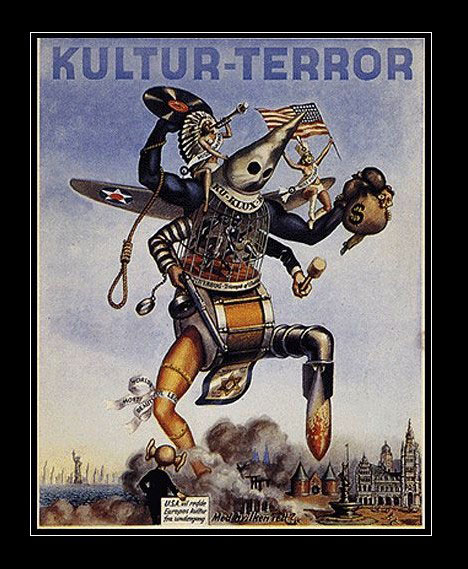 This disturbingly sardonic image was widely reproduced in Germany and occupied countries. There are several variations titled either KULTUR-TERROR or LIBERATOR. The color poster above is the most disturbing, portraying the decadent American prodigal son who has crossed the ocean to bring lies, hate and death to Mother Europe. The caption of the poster translates to “USA wants to save Europe’s culture FROM DESTRUCTION?” 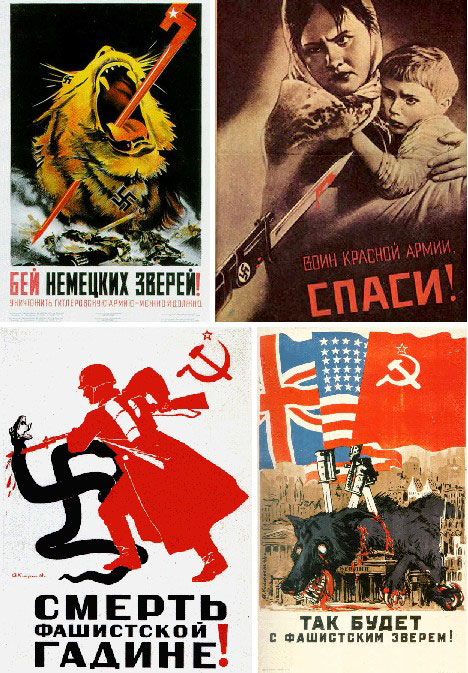 The USSR boasted a long tradition of vivid graphic propaganda that was employed to support their war effort in World War II. The war in the east began with betrayal and was bitterly fought – Soviet propaganda posters pull no punches: the translated captions on the above posters read, clockwise from upper left, “Kill German Beasts!”, “Warrior of Red Army, save us!”, “That will happen to German beast” and “Death To Fascist Vile Creature!” 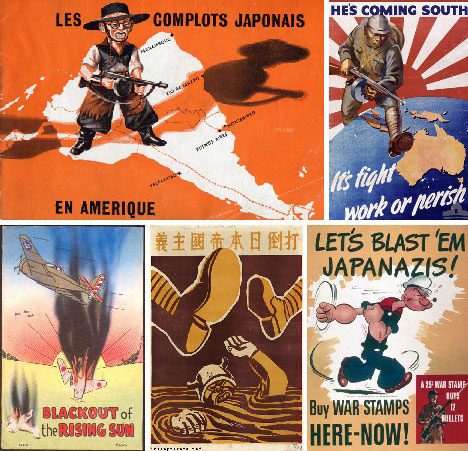 Here is a selection of unusual anti-Japanese propaganda imagery from the World War II. The curious British-made poster at top left warns of Japanese influence in… South America? 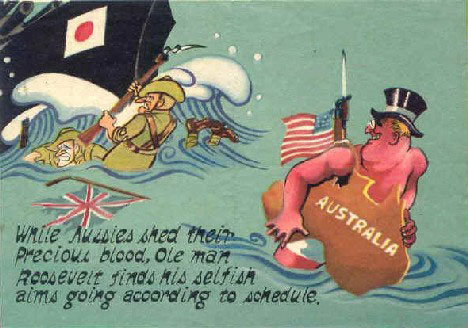 Above is an example of Japanese propaganda directed at Australian diggers fighting in New Guinea and the Pacific islands. Japan’s aim was to create a rift between Australia and the USA by sowing seeds of mistrust. 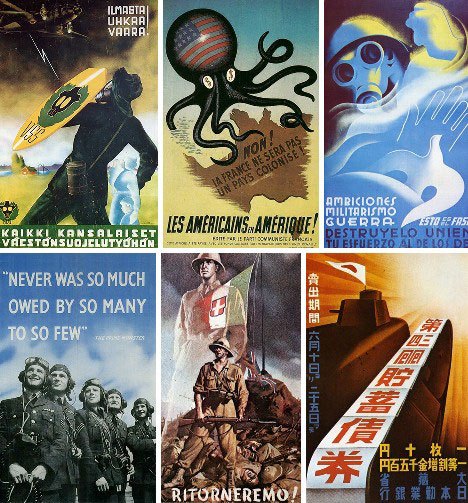 Wartime propaganda is an equal opportunity endeavor – so is war itself – and the above selection of posters is proof. The striking air defense poster at above top left is from Finland; to its right is an anti-American poster issued by the French Communist Party and at top right, a Republican poster from the 1936 Spanish Civil War. Below those, from left to right are posters from Great Britain, Italy and Japan.

War often brings out the worst in humanity yet it can also bring out our best when people unite to defend their country, their families and their way of life from an opposing force who seeks their destruction. The same can be said about wartime propaganda – at worst it’s blatantly offensive, at best it can rally hearts and minds to a common cause.