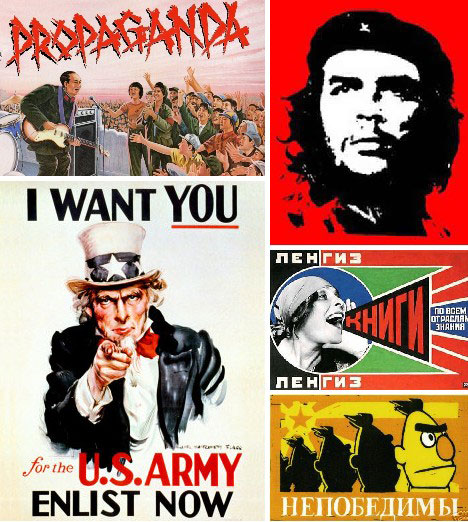 Propaganda, presented graphically as posters, pamphlets and pictorial artwork, aims to influence the attitudes of people to serve the purposes of the propagandists. Governmental guerrilla marketing in a sense, propaganda also has its good side: it can inspire and unite people behind a worthy cause. Here are 13 examples of propaganda showing it at its best, worst and purest.

My Country, Right Or… Right! 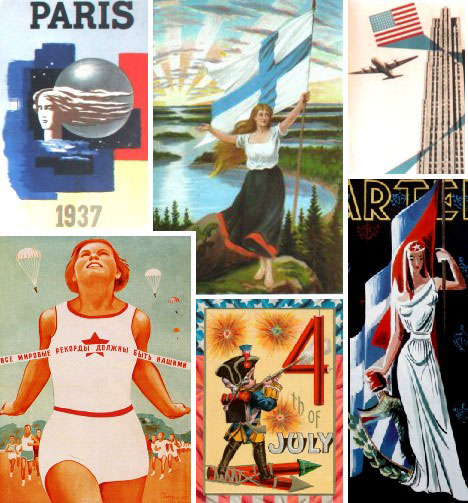 (images via: Classic Posters and Museum of Russian Posters)

Propaganda can have a wide or narrow focus; many examples of the former generally seek to boost pride in the host country without any particular goal in mind. Above are a few attempts at pictorial nation-boosting. From upper left: France, Finland, USA, Cuba, USA again, Soviet Union. 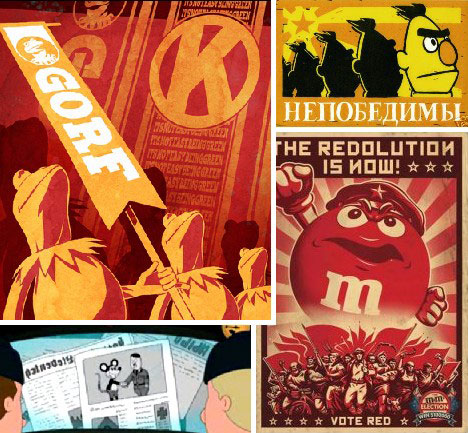 Why so serious? Propaganda has often been SO serious and over-the-top that it invites parody. By injecting a note of humor into traditionally staid & solid imagery we can derive amusement from belittling the propagandists while enjoying the jarring inconsistency between, say, the Soviet Threat personified by an army of Kermit or Bert clones. 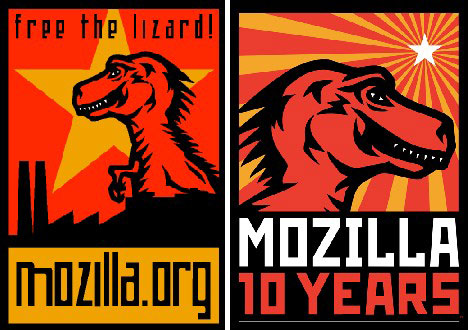 (images via: Into The Fuzz)

Above are a few more modern homages to stereotypical propaganda posters, mainly of the early Soviet style. The highlight is the bright & bold 10th anniversary Mozilla artwork by Lee Tom (above right) that nicely updates the original Mozilla art created by Shepard Fairey (above left) back in 1998. To quote, “Our goal was to create a piece that retained the bold, constructivist graphic style of the original without the “happy worker” Communist imagery that understandably rubbed some in our community the wrong way.” 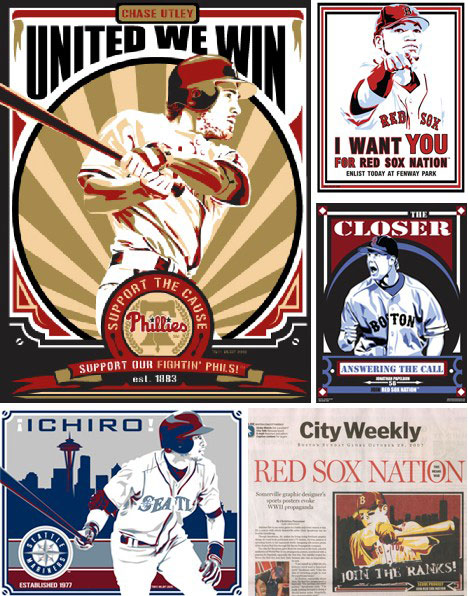 Chris Speakman’s Sports Propaganda limited edition prints and posters draw on the rich history of graphic propaganda. If you’re gonna support the team, there’s not much more you can do – besides painting your face, of course. 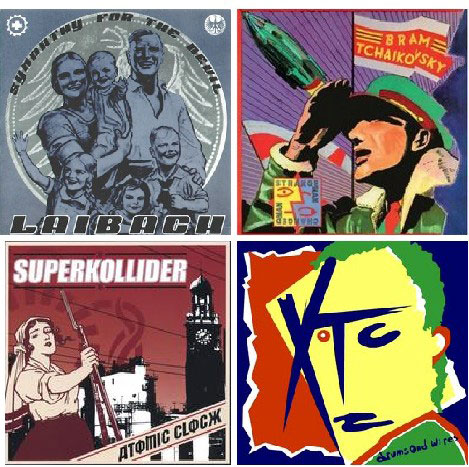 The bold imagery of propaganda posters has often been used by musicians and bands for their album/CD cover artwork. Examples above include, from upper left, Laibach (1988), Bram Tchaikovsky (1979), XTC (1979) and Superkollider (2001). 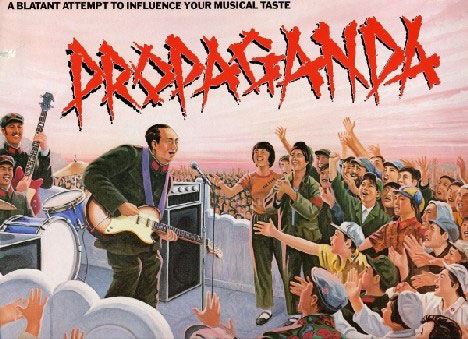 One would be remiss in missing the obscure but completely relevant 1979 new wave compilation from Canada titled Propaganda: A Blatant Attempt to Influence Your Musical Taste. It came with a large fold-out poster of the cover (featuring Mao Tse-tung rockin’ out) which looked very cool on this writer’s wall way back when. 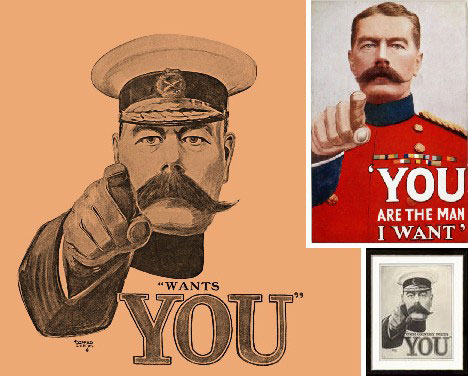 (images via: The Age and AllPosters)

The classic “I Want You!” war recruitment poster is rather mild as propaganda goes but they do use nationalistic imagery to boost their appeal. Most people are familiar with the Uncle Sam version, which incidentally is a self-portrait of an artist with the very patriotic name of Montgomery Flagg. That poster first appeared in 1917 but the original “I Want You” debuted in Great Britain several years earlier and featured the head of the British Army, Field Marshal Lord Horatio Herbert Kitchener. 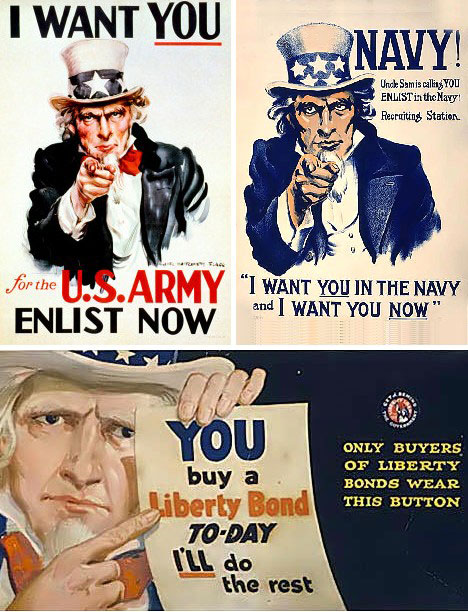 (images via: AllPosters and Son Of The South)

And here we have the Uncle Sam version which was used to great effect for over a half century, from 1917 up to the time of the Vietnam War in the mid sixties. Also shown is the less well known Navy version, also dating from 1917. 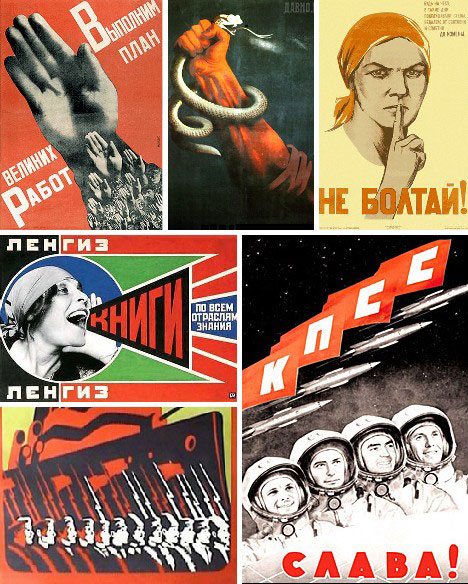 The Soviet Union hasn’t given all that much to Western culture – Tetris excluded – but their graphic propaganda has stood the test of time, if only for its inimitable style and visual impact. One reason early communist propaganda is so striking, even today, is that many of the artists who created these Soviet posters were students of Constructivism who sought to break art down to its basic building blocks. Easy does it, as they say! 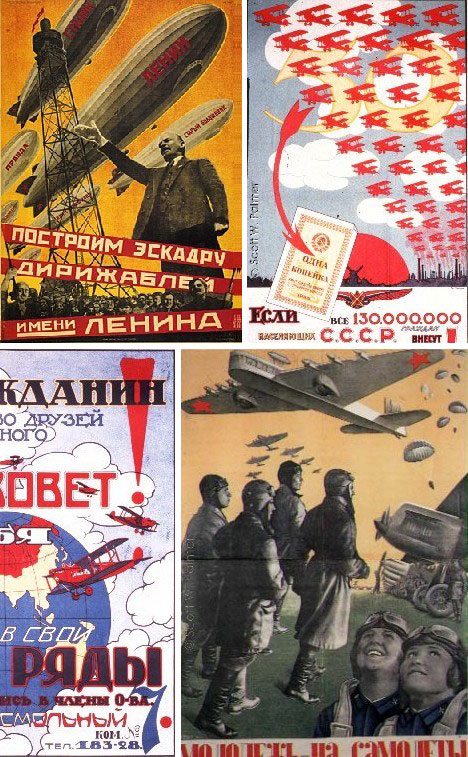 (images via: Dictatorship Of The Air)

Here are some more Soviet propaganda posters; these look to the sky for the glorious future of Marxist-Leninism. Bring on the Red Zeppelins… that’s a whole lotta blimps. 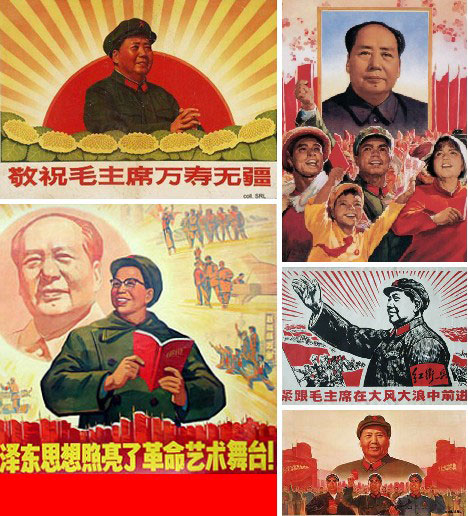 (images via: Celestial Kitsune and One Inch Punch)

“Red China” picked up the propaganda habit where the Soviets left off, adding singular features to appeal to traditional Confucianism in Chinese society. Also imported and even expanded was the cult of personality, mainly centered on Chinese Communist Party founder Mao Tse-tung.

The East Is Read 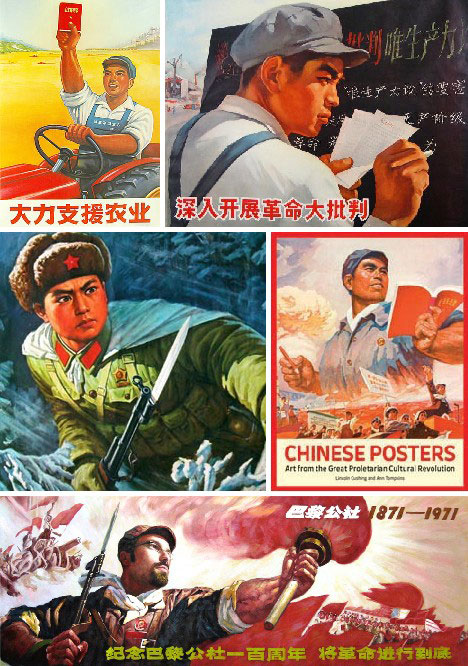 Not all Chinese pictorial propaganda revolved around Mao, as the examples above illustrate, but his famous little red book often subs for him. Typical features of all Chinese propaganda include heavy use of the color red and a patriotic message exhorting the proletariat to bigger and better things on behalf of the Party – and the country. 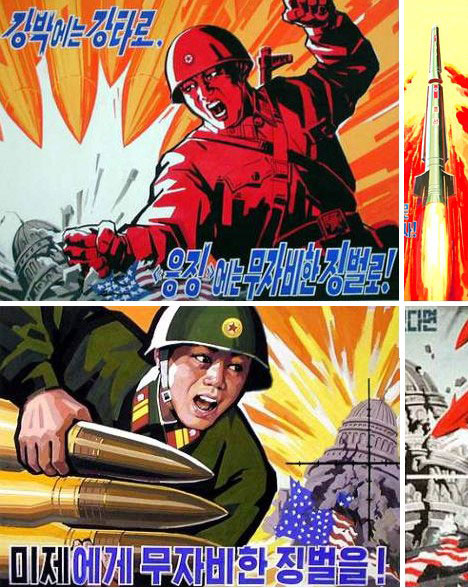 Nowhere in the world has propaganda been taken to such bombastic heights as in North Korea. As bizarre and ridiculous as some of The Hermit Kingdom’s anti-American propaganda may seem, one must consider that in many cases the message is being aimed at a captive population who have no access to outside sources of information. One especially fierce, definitely disturbing image (above, top) shows a DPRK soldier crushing the U.S. capitol dome while shouting in patriotic glee. Nice… and these guys DO have WMDs.

Oh Che Can You See… 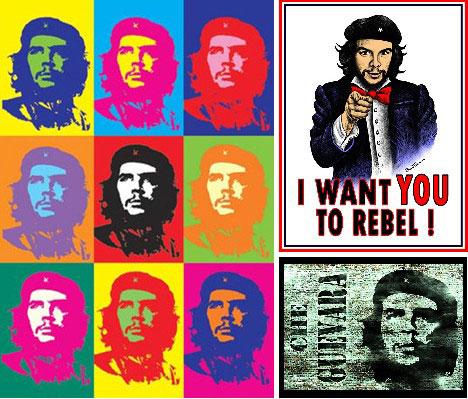 The poster boy – literally – for revolutionary propaganda has to be Argentinean-born Marxist guerrilla Che Guevara. Though he was captured and executed in Bolivia in 1967, the photograph of Guevara that has been reproduced innumerable times was taken 7 years earlier by Alberto Korda. Among the many artists who helped immortalize Guevara via Korda’s 1960 photo was Andy Warhol. As bright, bold and bombastic as so much of the past century’s graphic propaganda has been, very little can hold a candle to this one iconic image of a single man, single-minded in his devotion to a cause.

This overview of propaganda touched only lightly on its use – and abuse – during wartime. Stay tuned for more Pugnacious Propaganda: The Art of War, coming soon!