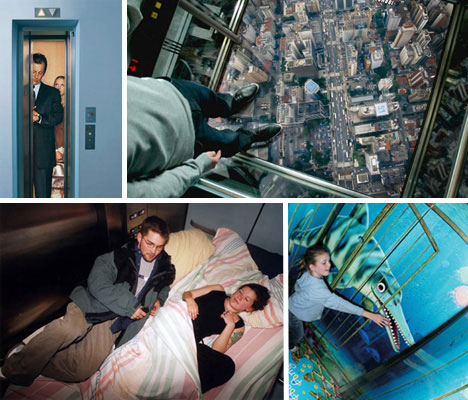 You’re crammed into a tiny space with several other people, spending an average of thirty seconds staring at either the floor or the wall. That’s what makes elevator advertisements and art so brilliant – people have little choice but to look. Marketers and artists have taken advantage of this very captive audience in some brilliant ways, from creating optical illusions with stickers to transforming the space into an apartment or even a disco club. 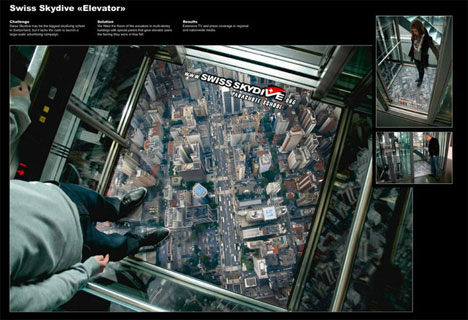 Anyone who’s afraid of heights might think twice about riding in this elevator, which seems to reveal a shocking view of a city far below the riders’ feet. But this is no glass elevator located at a dizzying distance above the ground – it’s just a large sticker affixed to the floor. The ad was created for a Swiss skydiving school, giving people a taste of what you experience when leaping from an airplane. 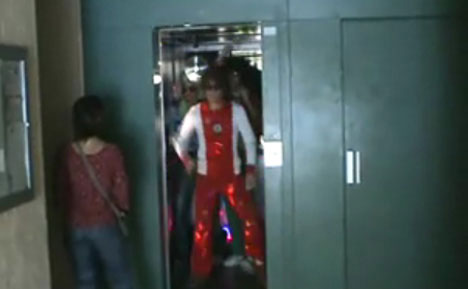 A girl waiting for an elevator got quite a surprise when the door opened to reveal a lively miniature disco club, complete with afros, polyester suits and a shimmering, spinning disco ball. It’s all the work of prankster Rémi Gaillard, who has been called “the French equivalent to Johnny Knoxville.” 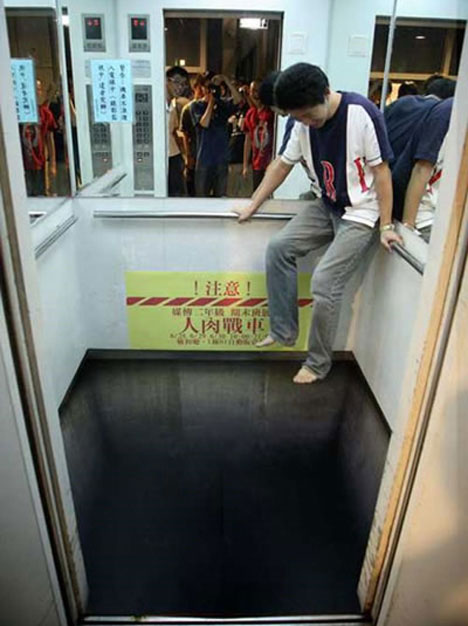 Would you even step foot into this elevator if it appeared to have no floor, especially considering that a sign at the entrance cautions users that the elevator is still under construction? If you were brave enough to walk inside you’d find that it’s actually a cleverly designed paint job that gives the illusion of a bottomless elevator shaft underfoot. 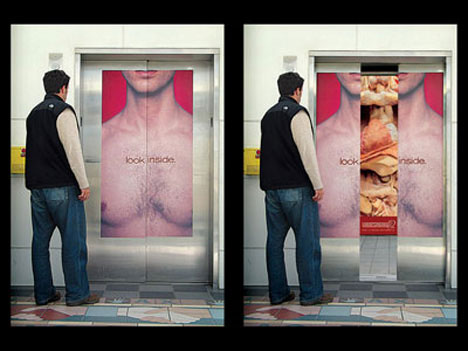 Another form of elevator advertising uses an image displayed on the outer doors that reveals something new when the doors are opened, as in this example where a man’s chest is opened to reveal his insides. This ad was made for the Body Worlds 2 Exhibit, a traveling exhibition of preserved human bodies and body parts.

Living Life in a Lift for One Day 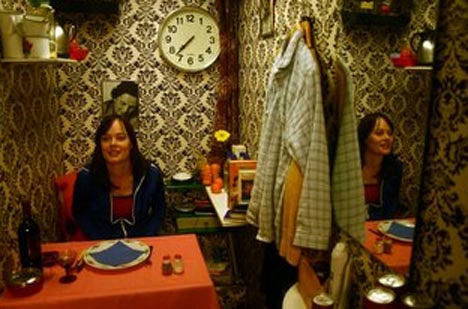 Could you live in a space this small? A Dutch art student transformed an elevator into a living space complete with table, coffee maker, lights, books, shelves and a clock. She spent an entire day there, eating, relaxing, reading and working. Anyone who called for the elevator throughout the day was surprised to find the cozy ‘apartment’ and its nonchalant occupant. 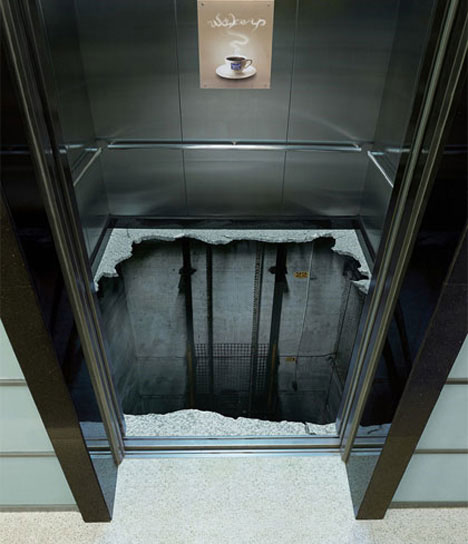 Design firm Ogilvy Beijing of China created this ad for Maxwell House as a ‘shot of adrenaline’ – when the doors opened, sleepy people in an office building were shocked awake, providing an effect that the designers figured mimics the effects of drinking a cup of coffee. The ad reportedly caused a commotion on the morning of its launch as surprised office workers crowded the lobby. It drew a crowd from people in neighboring buildings for the next week. 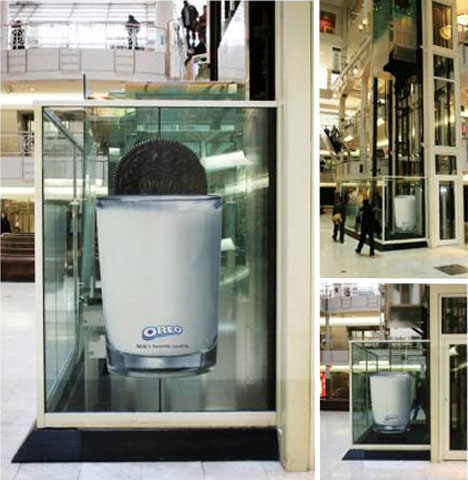 Oreo has branded itself as ‘milk’s favorite cookie’, and this ad plays up that tagline to a T, pairing a sticker of a glass on the outside of a glass elevator enclosure with a cookie sticker on the elevator itself. Watching one of the sugary confections slowly descend into a gigantic glass of milk as the elevator reached the ground undoubtedly had onlookers salivating.

Can’t Fit Through the Door? Time to Hit the Gym. 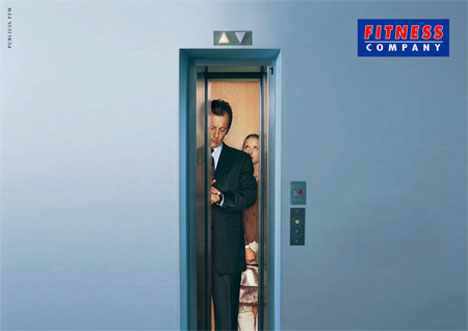 It’s a nightmare scenario for anyone who’s self-conscious about their weight: a door that’s too small to fit through. The Fitness Company, based in Germany, created this ad in the hopes that it would nudge people into joining their gyms to get slimmer.

If gyms are successful at goading people into getting fit, eventually they’ll be strong enough to pry open elevator doors with nothing but the amazingly powerful muscles in their arms. At least, that’s what this ad by Gold’s Gym seems to promise with its leathery, barrel-thighed bodybuilder.

Art Installation in an Elevator Shaft 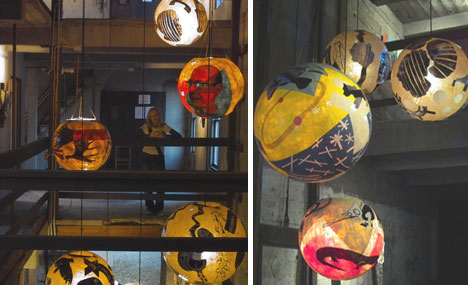 Painted paper lanterns by artist Yura Adams are perfectly displayed in an empty elevator shaft in this art installation at the John Davis Gallery in Hudson, New York. 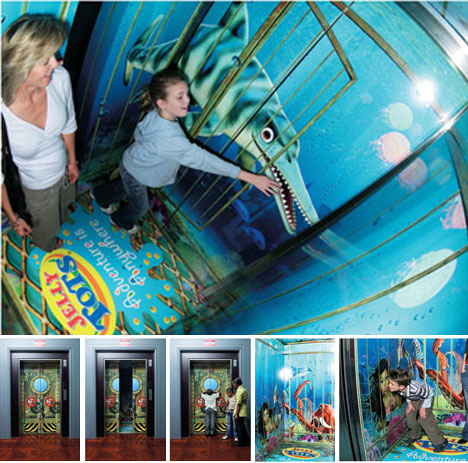 Jelly Tots Sweets made elevator rides a lot more fun for kids and adults alike with this ‘experiential elevator’ ad, which transformed the entire elevator into an aquarium – including the outside doors.

A Trippy Elevator to Your Dreams 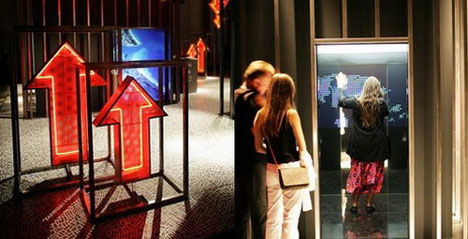 next floor from dotdotdot on Vimeo.

Elevators are just a quick way to get from point A to point B, which are usually just a few floors apart. An art installation at the Design/Art Fair in Verona, Italy challenged that notion, transforming the elevator into the mode of transport for an interactive dream journey, going from one fantastical world to the next. 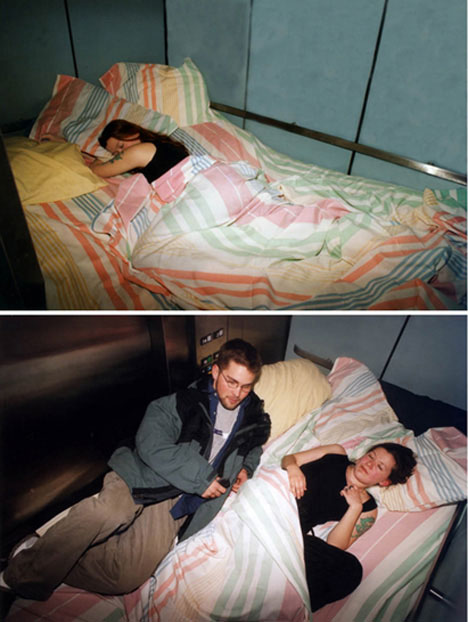 Do you want to skip the stairs badly enough to invade a girl’s privacy by stepping or sitting on her bed while she sleeps? This installation by Ruth Pringle forced users to make that decision, placing a double bed in an elevator along with bedding and a girl in pajamas. The project aimed to remind people of voyeurism, vulnerability and “the power within everyone to harm others”.

Sometimes, you’ve just got to give in to chaos and randomness. That’s the idea behind the ‘random lift button’, installed by artist Chris Speed in two elevators in Portland Square at the University of Plymouth in England. When you press the button, you end up on a random floor where you can meet people and experience things that you wouldn’t otherwise have experienced had you skipped that floor and simply gone to your original destination. 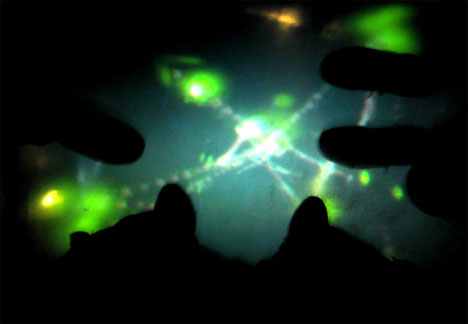 The Ars Electronica Center in Linz, Austria is a center for electronic arts often referred to as the ‘Museum of the Future’. Fascinating technology is incorporated into every aspect of the building, including the elevators, where screens on the floor and/or walls provide an interactive experience. The floor screen simulates a virtual space underneath the elevator inhabited by ‘sonic particles’ that multiply as the elevator rises. The wall screen shows the progression of evolution moving forward as the elevator rises and backward as it goes down.