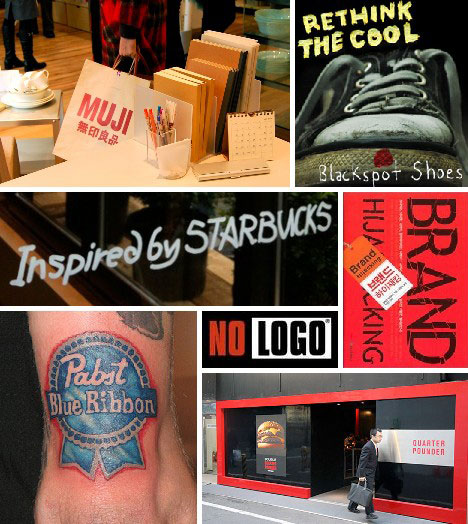 Building a brand was Job One back in advertising’s golden age – legions of men in grey flannel suits built careers upon that very rule. In today’s world of information overload and soul-killing McJobs, however, brand saturation is turning marketing mantras on their heads. From debranding to unbranding to back-door product placements, it’s hard to know who’s selling what – which is the whole point. 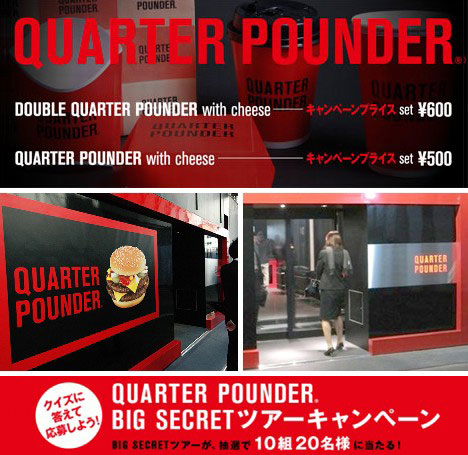 (images via: Neil Duckett and InventorSpot)

McDonald’s is one of the world’s most recognized brands, yet this enviable position isn’t completely to the liking of the powers at McD Japan. How else to explain the opening of two Quarter Pounder stores in Tokyo? Decked out in upscale black & red decor and without a clown in sight, customers wondering what the “big secret” was were offered a mere two menu choices: a Quarter Pounder or a Double Quarter Pounder, both with cheese. Even the packaging is as generic as possible. 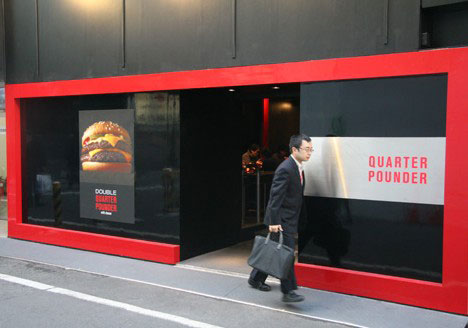 So, just who’s fooling who here? Who smiles inwardly, McDonald’s execs or Quarter Pounder customers? It doesn’t matter. Nothing matters.

No Brand, No Problem 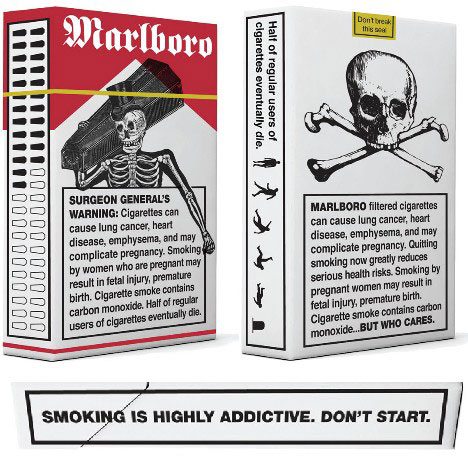 Is anti-branding subversive? Yes and yes – product pushers are, in effect, trying to put one over on consumers who, by buying no-brand items, think they’re doing their part in a wider campaign that embraces an anti-corporate methodology. Everybody’s happy and in the end, more product gets sold. Customers may even find themselves attracted to a product that instead of trying to lure them into buying, does just the opposite – like the prototype anti-brand cigarette boxes above, designed by Pentagram as a response to possible plain black-and-white cigarette packs that may soon me mandated by the federal government.

(images via: We Made This and Alistair Hall)

Pentagram’s designs add Goth appeal while (mainly) staying within the proposed guidelines. The set above distills the text and graphic ad copy down to a bare minimum yet even these packs will likely do little to dissuade smokers from lighting up. 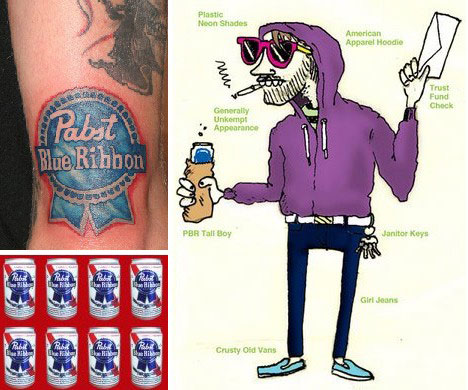 Pabst Blue Ribbon… the King Of Beers, it ain’t. With sales down 90 percent since 1975 it was a dying breed – rumors began to spread that Pabst was about to kick the beer bucket. Brand image? It barely had one as marketing budgets were scraping the bottom of the barrel. In short, Pabst was a sitting duck for unorganized hipster hijackers who saw the brand’s negatives as positives. The underdog low-brow brew took on a new life as “P.B.R.” and sales rose faster than foam on draft poured into a dirty mug. Pabst, the subversive beer with no brand… which is ironic in a way, as Pabst no longer brews its own beer. It’s all sourced from Miller.

No Logo Too Low 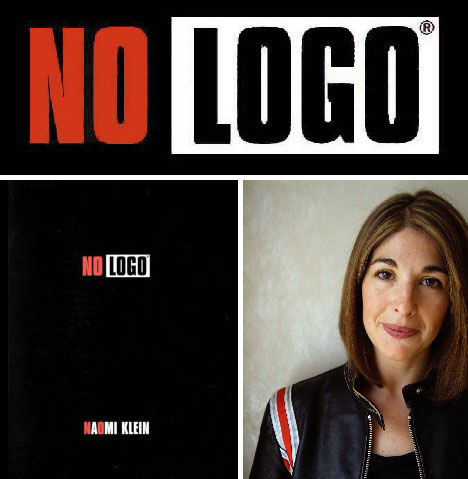 Naomi Klein‘s 2000 best-seller No Logo: Taking Aim at the Brand Bullies was arguably the first stab at distilling the essence of anti-branding and its roots in modern corporate/consumer culture. With sections titled No Space, No Choice, No Jobs and finally No Logo, the book explores themes ranging from the birth of the anti-globalization movement to the phenomenon of McJobs. Klein’s exploration of consumerism’s soft underbelly has been trumpeted by some and trashed by others, the latter most memorably by Warren Ellis who, as Doktor Sleepless, stated “Even No Logo had a fucking logo on it”.

No Hijack Too High 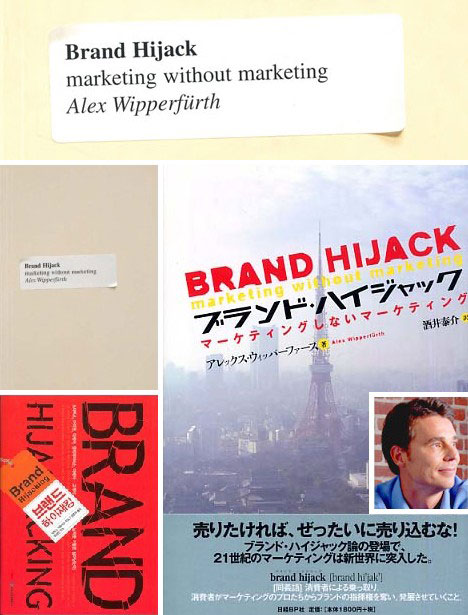 Following up on No Logo several years later in 2005 was Brand Hijack: Marketing Without Marketing by Alex Wipperfürth. Brand Hijack cleaves more closely to the traditional business guru tome while proposing a most un-traditional strategy for marketers: “Let go of the fallacy that your brand belongs to you. It belongs to the market.” At the same time, Wipperfürth addresses control issues that give corporate execs and product planners night chills by reminding us all that, as he puts it, “consumers fine-tune products, not create them.” 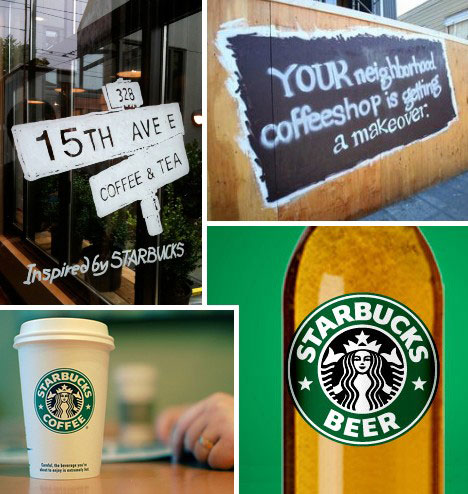 (images via: JoshC and BeerBeer)

Looking for a cuppa java but put off by those cookie cutter coffee kiosks foisting faux ambiance at a premium price? You betcha! Turning up your nose at yet another Starbucks, you decide to try the neighborly named 15th Avenue Coffee and Tea. Sorry, you’ve been fooled again. Meet the new haus, same as the old haus… with one noteworthy exception: 15th Avenue stores will sell beer and wine along with selected Starbucks coffees and teas. 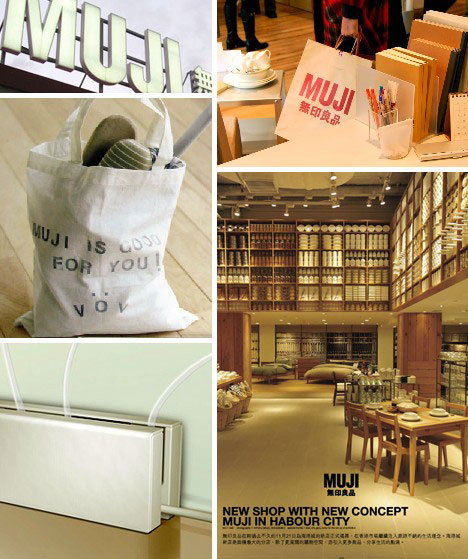 (images via: Ecolect and 7inch)

McDonald’s and Starbucks have dallied with unbranding but everyone gets the joke – and many are not amused. Perhaps the purest way to go no logo is to start off that way, and let the products speak for themselves without crafting a brand image. It works; Muji has established itself as a good quality, great value retailer without the use of overt branding. If you’re wondering what “Muji” means, it’s short for Mujirushi Ryohin which translates to “no brand, good product.” 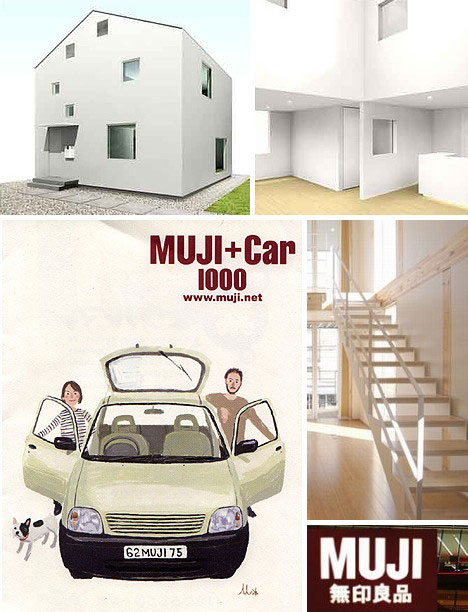 (image via: Useful and Agreeable)

True, Muji’s products share a certain basic, simplistic style that extends from the smallest kitchen utensils to actual houses and cars, but everything is subsumed in a common, form-follows-function design ethos. Muji has expanded from its Japanese base by opening stores in Europe and the USA, proving an appealing concept knows no boundaries. 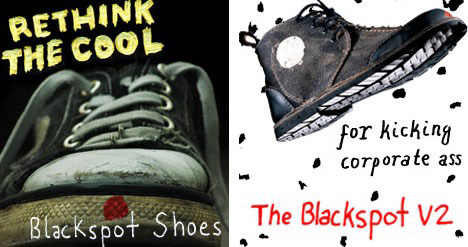 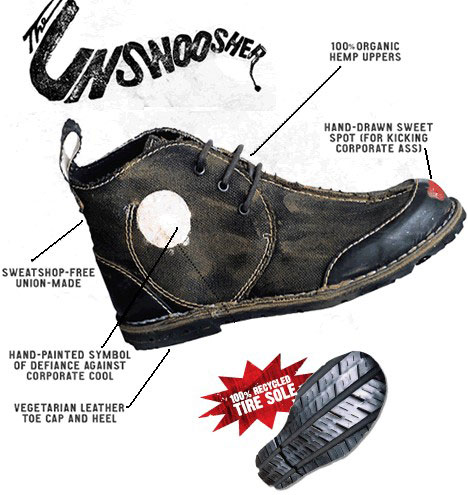 (image via: The Discerning Brute)

The Classic Blackspot Sneaker and v2.0: The Unswoosher shoes make a statement with sole. Conceived by anti-branding bible Adbusters, Blackspot is a brand that seeks to beat corporate bully-boy Nike at their own game; by playing fair. No outsourcing, no sweatshop labor, no environmentally unfriendly manufacturing is what Blackspot preaches and practices. 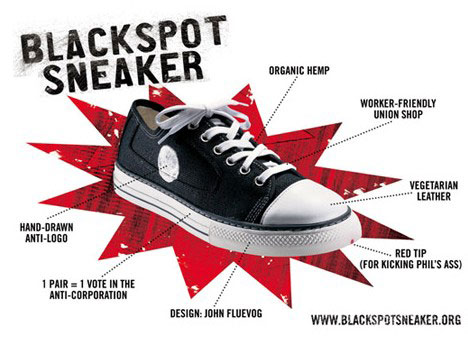 Sez Adbusters, “the Blackspot, from it’s red toe-tip and hand-drawn anti-logo to its renegade billboards and TV ads, is designed to do only one thing: kick megacorporate ass. We’re going to cut into Nike’s market share, unswoosh that tired old swoosh and give birth to a new kind of cool in the sneaker industry.” 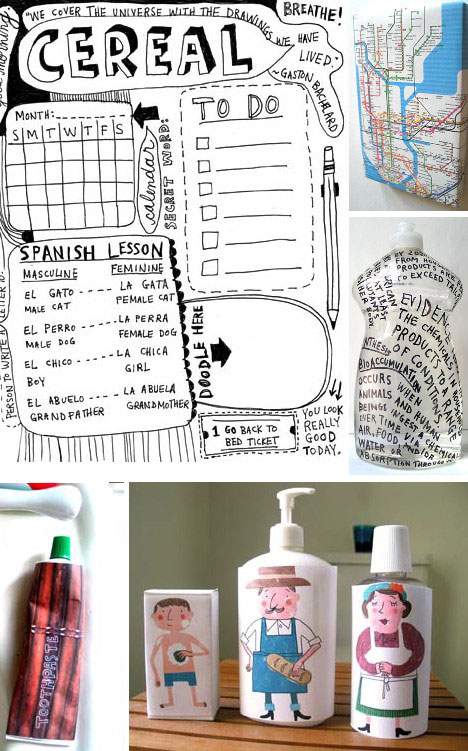 Well, that’s a little harsh – how about Unbranding @ Home, though the “For Dummies” was in reference to anyone being able to unbrand on their own no matter how brand-washed they might be. Keri Smith is a champion of DIY unbranding and she takes the concept to where we live. Why be blasted by Kelloggs hype every morning when one of Smith’s home-made cereal box skins can educate, illuminate and uplift your life just as your day is beginning? Even a pack of gum can serve an alternate purpose… as a subway map. 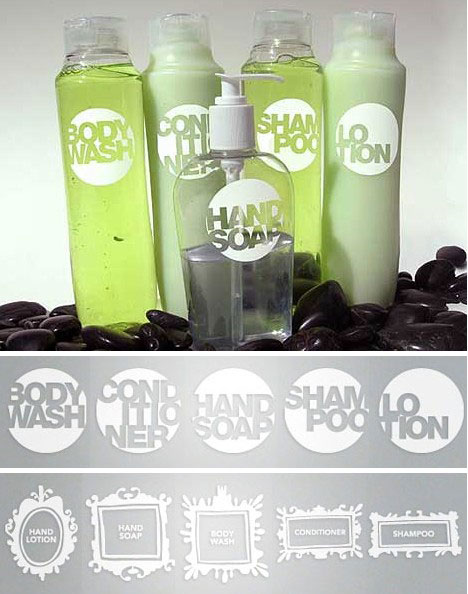 (images via: Trendhunter and Apartment Therapy)

Modern society offers few refuges from the constant drone of branded advertising – even our homes aren’t safe… or are they? One way to rid personal living space of brand clutter is to use generic home products displayed in plain containers with de-branded labels, and at least one company, DeBranded Home Labels, offers an easy way to do just that. Sure it’s a pain to transfer liquid soap and so on from branded to non-branded bottles; the solution is to buy bulk generics and fill up the smaller containers as needed. Bonus: DeBranded Home Labels don’t even have “Debranded Home Labels” logos on their stickers.

Though recession economics have forced many to cut back on big buck brands in favor of generic, unbranded alternatives, the power of The Brand was arguably into a slump of its own. Is society wising up to Madison Avenue manipulation or are we just making better individual lifestyle choices? You decide.