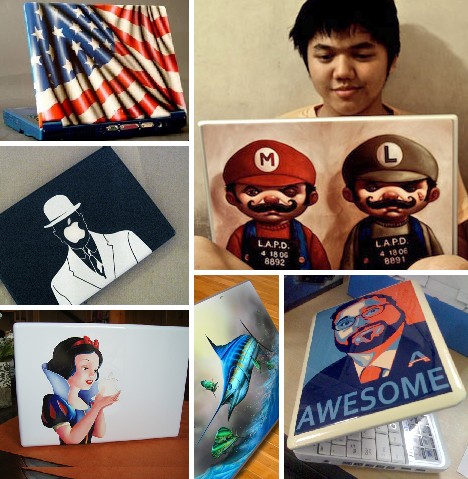 No matter how stylish factory-fresh laptop and netbook computers may be, they all lack that certain something only a human owner can provide: individuality. These 15 examples of creative laptop art show that stating your case to appeal to the senses demands the application of the same. 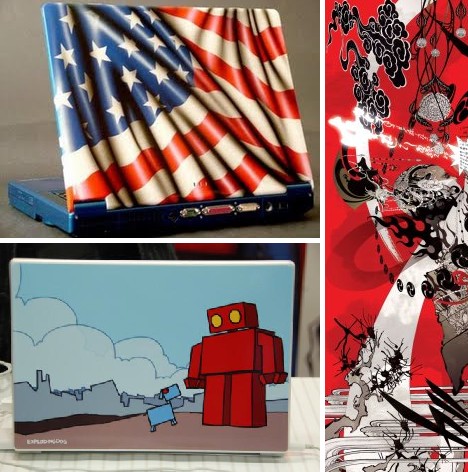 (images via: Gizmodo and Funkytrend)

Laptop and netbook covers arrive out of the box all sleek & shiny but it doesn’t take long before they morph into a fingerprinted mess. They’re also magnets for nicks and scratches, not to mention their excruciating boring-ness. One solution is to apply an attractive, resilient cover to the cover, and when it comes to skinning laptops, GelaSkins has got you covered. GelaSkins are made from high-quality vinyl that sticks like the Dickens when applied yet peels off easily without leaving an unsightly sticky mess. A wealth of designs that come in a range of 5 sizes make personalizing one’s laptop as easy as saying “gimme some skin!” 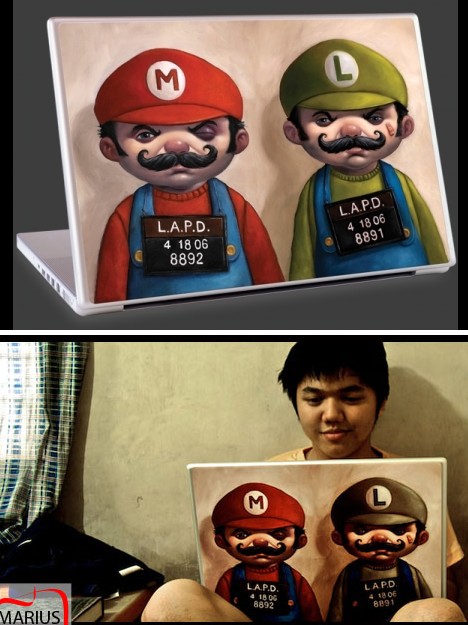 Busted! Looks like Mario & Luigi finally slipped up and now their mugs are on display for all & sundry to gaze upon. This cool GelaSkin shows off Nintendo’s plumbers-in-law in a city gritty way you’ve likely never seen before. The disturbing yet compelling mugshot-style image is based on an original artwork by artist Bob Dob called “Rough Night Out”. 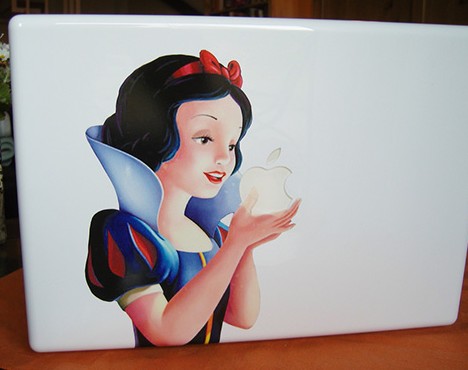 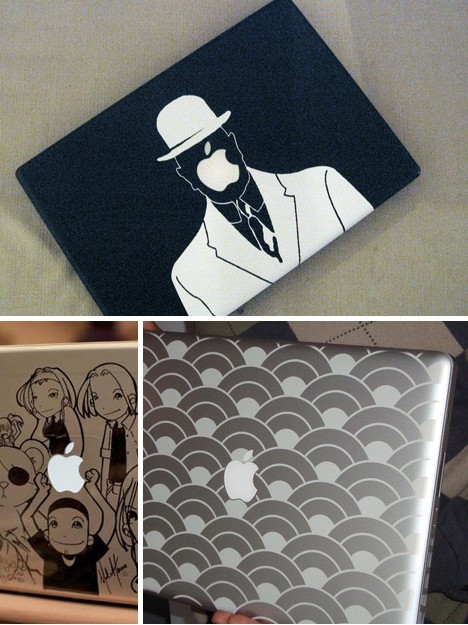 (images via: ScarletBits and Likecool)

Even the most fanatical Apple fanboys won’t hesitate to protect their objects of affection and in the process, transform them into objets d’art. The classic Apple apple often isn’t obscured in these treatments as doing so would be, well, just wrong. 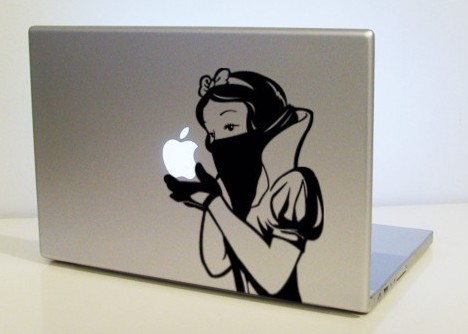 Above is another variation on the Snow White theme, courtesy of 9to5Mac. 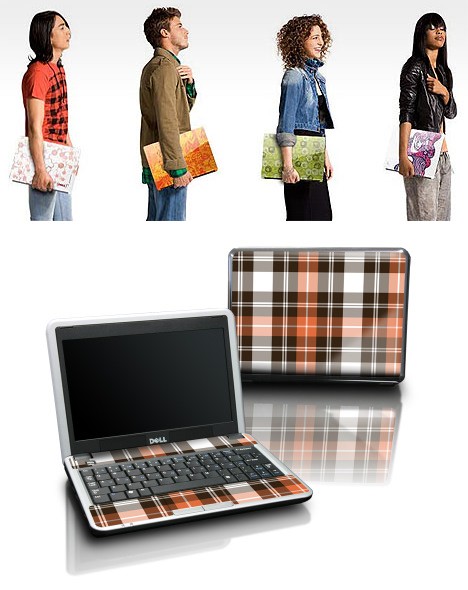 Dell helps those lacking in DIY gusto to get the custom look just by ordering it up. To quote Dell’s copy, “These designs take a cue from the latest in fashion and textiles, plus traditional and vintage-inspired prints, making your next computer a part of your look.” Need a new laptop case design at ludicrous speed? No problem – you can even go to plaid.

From Art House To Your House 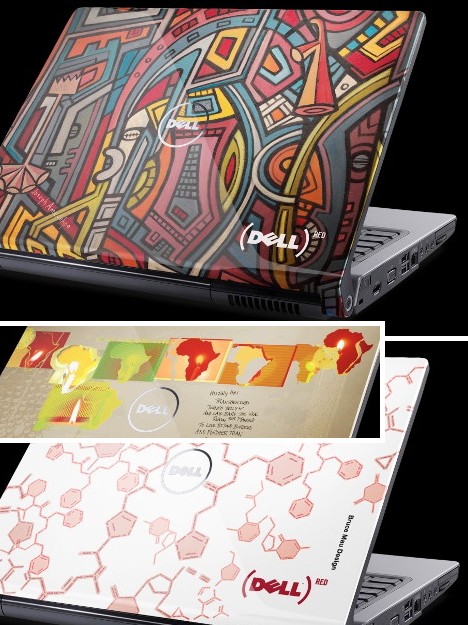 Dell’s Art House Studio series of designer laptops allow users to display their individual sense of style while contributing to projects dedicated to solving the world’s most intractable problems. Available on Dell’s Studio 15 and Studio 17 laptops, the original (PRODUCT)RED artwork titled New World, Shine Within and Healing Patterns is by artists Joseph Amedokpo, Siobhan Gunning and Bruce Mau. For each laptop ordered Dell is donating $20 to the Global Fund – now that’s a pattern we’d all like to see repeated. 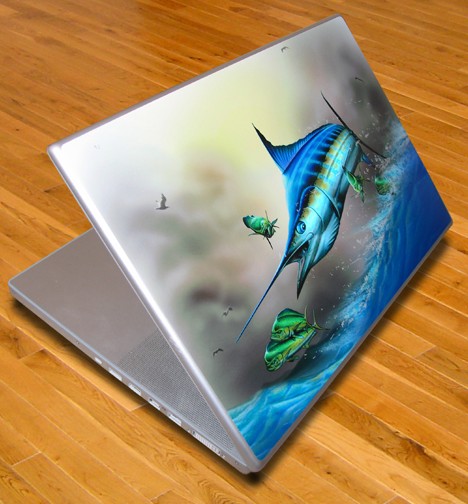 Got a vision that reflects your particular interests? Got access to an industrial digital printer and computer-controlled vinyl cutter? Put it all together and you get something like the amazing vinyl laptop skins produced by avid sports fisherman Vinnie Myers. By the way, Myers is also an accomplished tattoo artist with over 20 years experience. My laptop; my self? See Vinnie, maybe you can get a deal on a skin for your laptop and a laptop on your skin. 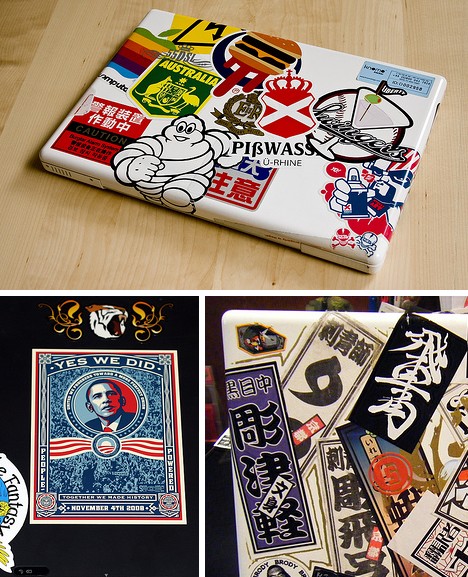 Apply enough stickers to a laptop lid and you’ve got a collage. Do it creatively and you’ve got art; at a bargain price. The near-psychedelic sampling above is from BoingBoing Gadgets, who asked their readers to send in pics of their sticker-shocked machines. 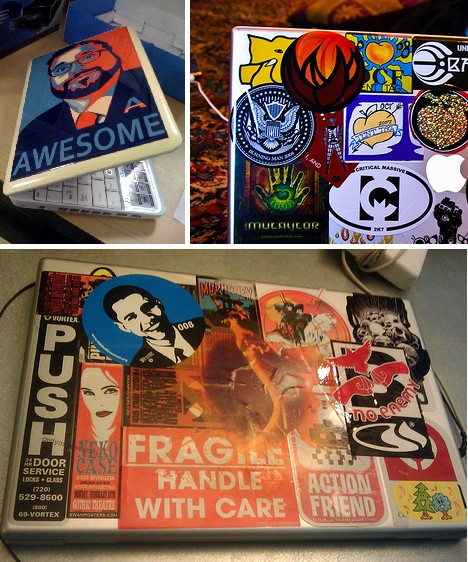 These sticker-slathered showpieces are just too good to pass by without a second glance. Note the preponderance of Obama – it’s hard to imagine any images of Dubya displayed on someone’s laptop; at least, not a flattering image. 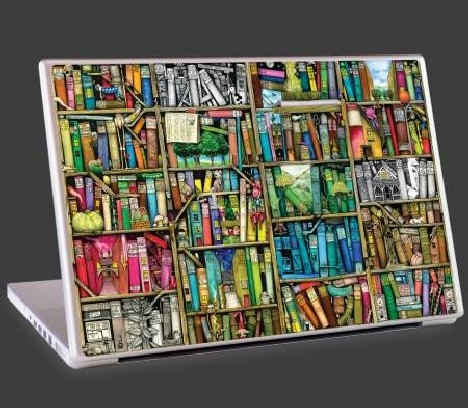 This trompe l’oeil laptop skin from GelaSkins blurs the line between fantasy and reality by making a laptop case look like an artist’s well-worn box of paints & pastels. One advantage of such visually complex vinyl skins is that should they become scratched or slightly worn with long term use, the effects of such weathering are much less noticeable than on a shiny, formerly-factory-fresh lid. 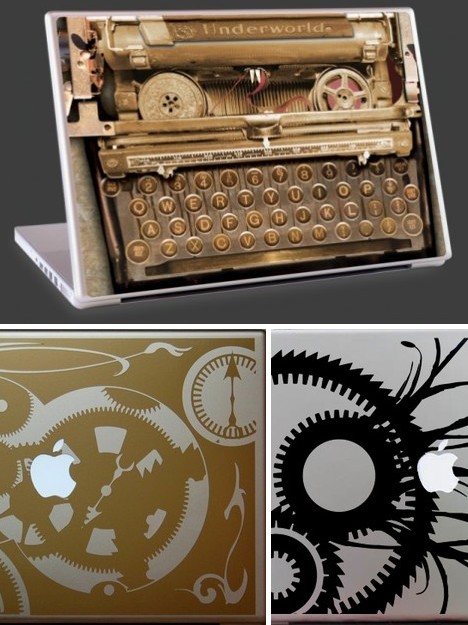 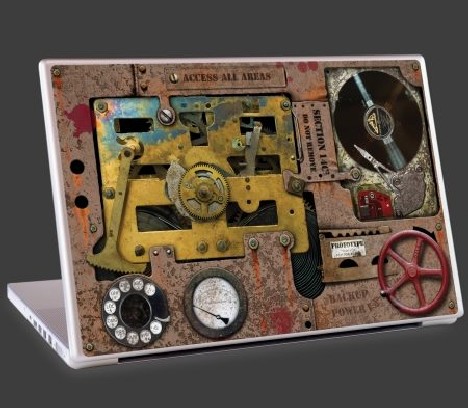 Steampunk too has made its way, puffing and clanking, onto today’s brassless generation of laptops and netbooks. The clarity and fine detail of these skins does justice to the intricacy of classic steampunk imagery – without all the fiddly gears and sharp edged screw-heads. 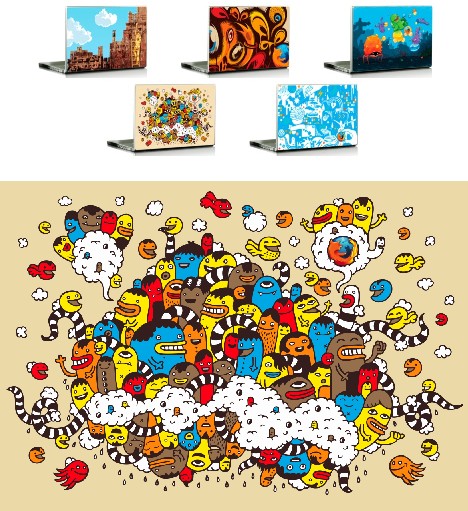 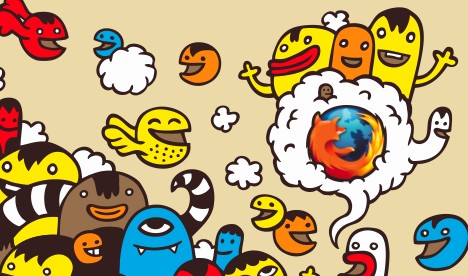 (images via: Infectious and Into The Fuzz)

Mozilla – the folks who brought us Firefox – have teamed up with the edgy artists at Infectious to produce a series of 5 custom artworks inspired by Firefox 3.5 and applicable to iPhone skins, car decals and laptop stickers. The piece highlighted above, by the artist currently known as Zeptonn, shows off the fanciful nature of the designs.

Hands Across The Water 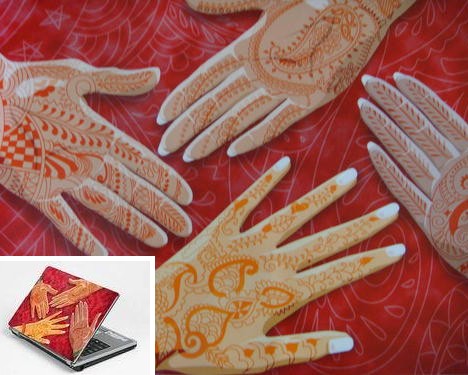 (images via: Bid Or Buy)

Here’s a cool laptop art sticker that evokes primitive folk art as it protects and beautifies modern technology. Only available in South Africa unfortunately, the high-quality PP film coating fits 15″, 14″ and 13″ wide laptops (screen width) but can be trimmed manually to achieve a precise fit. As with most better laptop stickers, this one uses special adhesive that makes it both easily removable and repeatedly reusable.

Skins For The Win 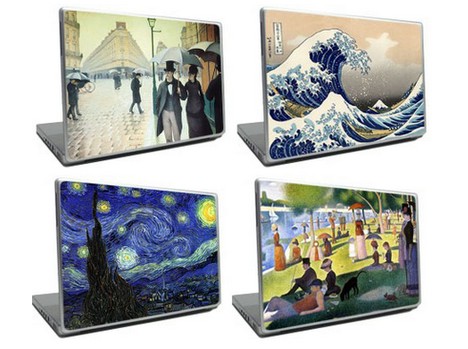 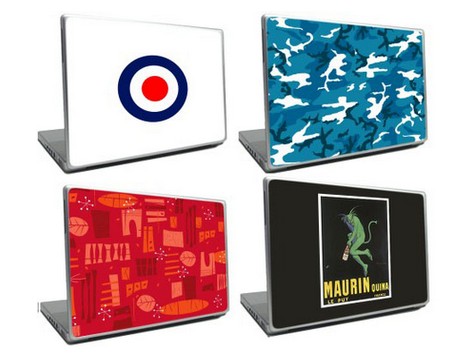 Shopday offers a wide variety of laptop skins with the usual flexibility in sizing and the use of removable adhesive on the back. Ranging from plain & unpatterned to reproductions of famous 19th century artworks by Van Gogh and Seurat, these laptop skins have one other characteristic that will appeal to local buyers – they’re made in the USA.

From The Cradle To Engrave 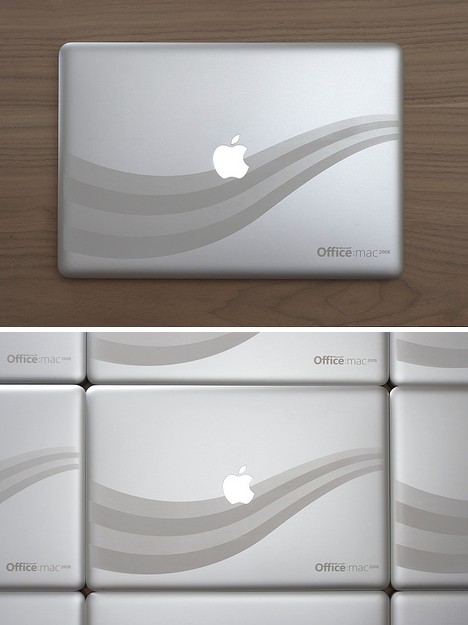 (images via: Engrave Your Tech)

Stickers aren’t the only way to liven up a laptop lid – engraving is less common (and more expensive) but when done up right can amaze and delight! Above are some Macbook Pro notebooks custom engraved to promote Office:Mac 2008 for MacWorld 2009.

Show Some Skin On Your Skin 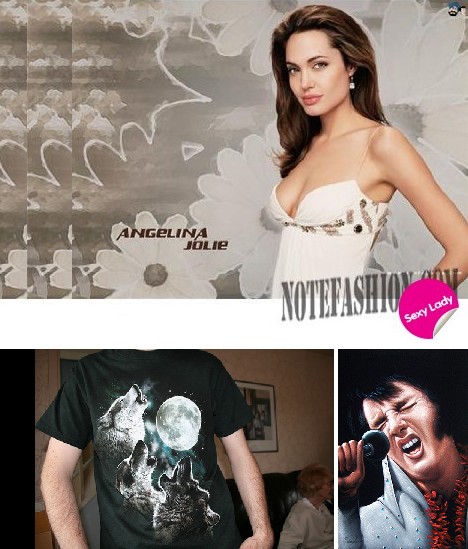 (images via: This Next and Nacho the Wonder Drummer)

It’s attractive, photogenic and eye-catching, but is it Art? We close this rundown on laptop art with something some may consider trashy, gaudy or sexist – or all of the above. Whatever, displaying Angelina Jolie and her cleavage on your laptop lid doesn’t necessarily need to be a statement of one’s inner beliefs, and AJ herself is neither devil nor angel. Could be worse… anyone out there making laptop skins in a “Velvet Elvis” motif? Or “Three Wolf Moon”?