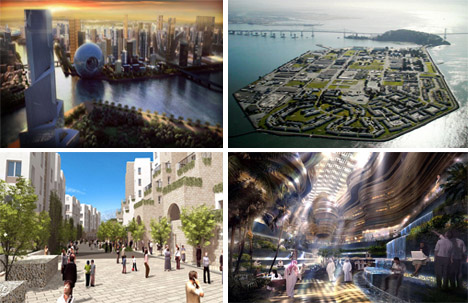 A good city, like a good wine, needs time to develop. As any Civilization-playing geek knows, it takes decades or centuries to turn a cluster of villages into a living, breathing metropolis. It cannot happen overnight. Or can it? Here are 12 urban centres that offer a radical alternative to the traditional model of urban development – they are brand new, fully-working cities from the first day they open for business. 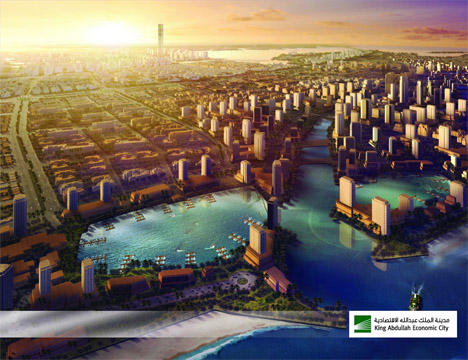 Saudi Arabia, as you may be aware, is not short on cash. It is therefore unsurprising that its king (Abdullah bin Abdulaziz Al Saud) can afford to put $80 billion on the table to finance a new city in his name that will hold an incredible 2 million people. 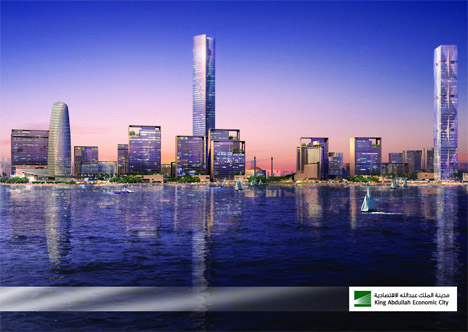 Eventually covering 150 square miles – core plus suburbs – on the edge of the Red Sea and just an hour away from Mecca, the spiritual centre of the Islamic world, King Abdullah Economic City appears to lack nothing but a sexy name. It will house one of the largest sea ports in the world, it will provide over a million jobs (desperately important for the future of a country where 40% of the population is currently under 15 years old) – and if construction sticks to schedule, it will be complete by 2020. Truly amazing. 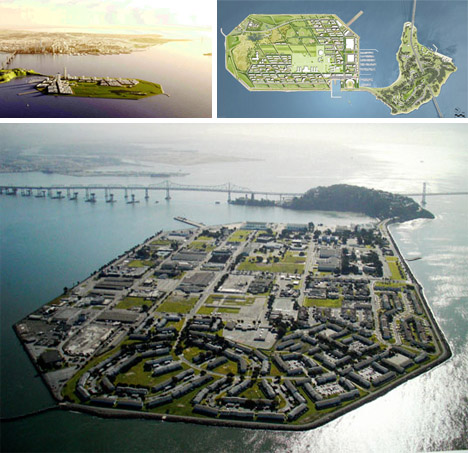 Named after Robert Louis Stevenson’s swashbuckling adventure novel (arrrr, that it be!), Treasure Island is yielding a different type of gold these days. The island is an entirely artificial construction built during the 1930s, and its massive derelict aircraft hangers have proved a popular resource for film-makers. A lively history – but soon to be entirely eclipsed by its redevelopment as a sustainably designed eco-city, incorporating an organic farm, wind turbines and a wastewater treatment plant. Most ingenious of all, the streets will all be realigned to minimize their exposure to the brunt of the wind, keeping residential energy bills as low as possible.

New Songdo City is much more than an agreement between designers and developers, accompanied by flashy computer models and artistic renditions…it’s rising higher every day. Perched atop 1,500 acres of reclaimed land, the city is designed with one overriding purpose in mind, as announced on its entrance gates: “Welcome: we will change the face of business“. With 80,000 apartments and 60 million square feet of office and retail space, it may be no idle boast. The $40 billion development will open in 2015 – and will probably only attract residents with deep pockets, as the average apartment will cost half a million dollars. 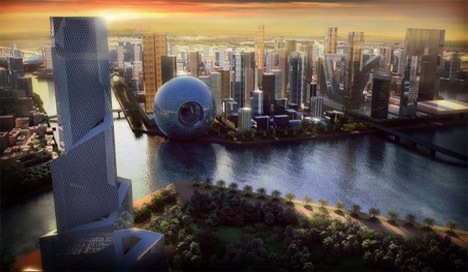 It goes without saying that ultra-wealthy Dubai has a new city in the works. It is at the centre of a development made of artificial islands and canals called Waterfront, the design-work of the Office for Metropolitan Architecture. With a population of 1.5 million, Waterfront will double Dubai’s population, boost its job market by one million and add 70km to its coastline. 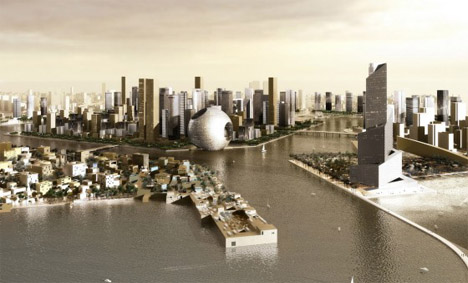 At its centre, Waterfront City – around 100,000 fulltime residents with a working capacity of three times that number, and arranged around a central island (pictured) comprised of a 5 x 5 grid of streets arrayed with high-rise buildings. (If you are wondering, the curious-looking silver sphere is a 44-storey skyscraper). However, the cultural focus of the development will be the second of Dubai’s Palm islands, appearing to sprout from one end of the Waterfront’s crescent. 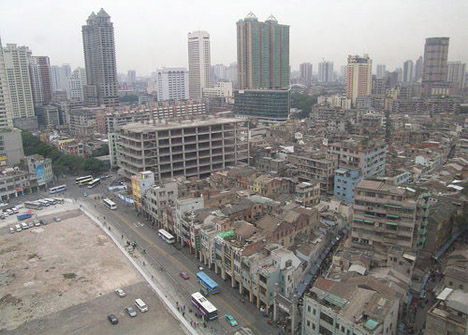 A city steeped in history, Guangzhou – better known to European history as Canton – is in the process of getting a much-needed makeover from the ground upwards…in essence by building a new city and threading it through the best remnants of the existing one. At present, derelicts buildings and crumbling concrete blight significant stretches of the metropolitan area (total population, a shade under 10 million).

The new Guangzhou will be a place of green spaces, space-efficient housing, an expanded transportation system and a new waterfront. Designers Heller Manus Architects intend for the city to be arranged around networks of open courtyards, attempting to beautify the shabby, impractical areas of the city with greenery and planned gardens. The Southern axis of the city is currently under scrutiny, and when it is developed it will be linked with its already renewed Northern counterpart (also the work of Heller Manus) and the city’s transformation will be complete. 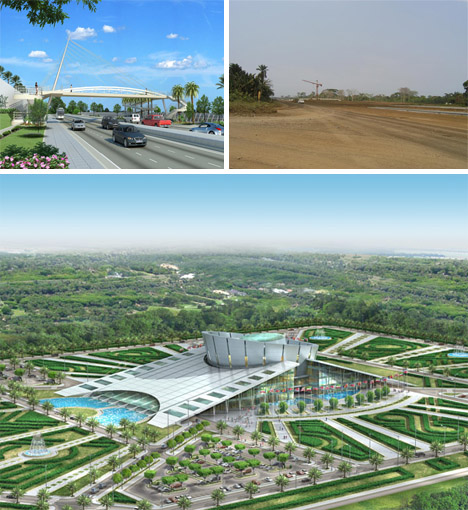 The capital of the Republic of Equatorial Guinea, Malabo, is eager to leave its past behind – not just a troubled post-colonial history, but an urban infrastructure that can’t keep up with a booming population. The answer is Malabo II: an attempt to relocate the heart of the city on its outskirts and rebuild outwards from there. Many of Malabo’s principal governmental buildings will be resituated at the new site, surrounded by good-quality paved roads and cutting edge infrastructural technology. The money for all this is coming from huge oil and gas reserves found off the coast in the 1990s – and the eventual aim is to absorb the old capital into Malabo II, replacing the city from within. 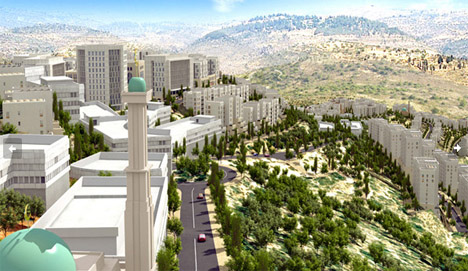 If ever a place was desperate for new cities, it’s the Middle East’s West Bank. For the last 50 years, Israelis and Palestinians have struggled to find common ground in every sense imagineable – and the fallout has blighted the Palistianian economy and the region’s standards of living. The new city of Rawabi intends to change all that. 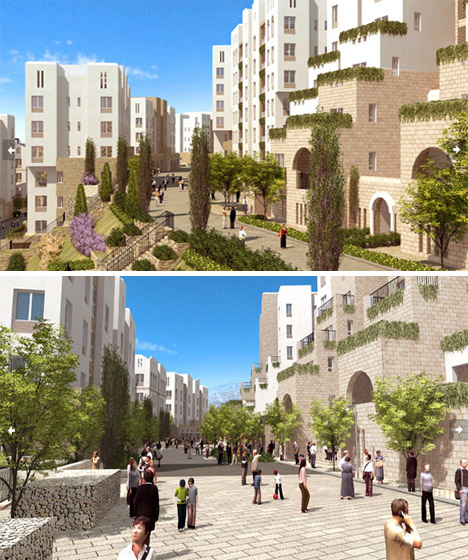 As well as offering a place for Palistinian professionals to set up home in beautiful, airy, well-kept surroundings, the city is also designed to anchor the region’s economy and provide a place for long-term investment, research and learning. It is a place built to endure in a land in flux for decades – and more than that, it is an unambiguous political statement for the Palistinian people: We Are Here To Stay. 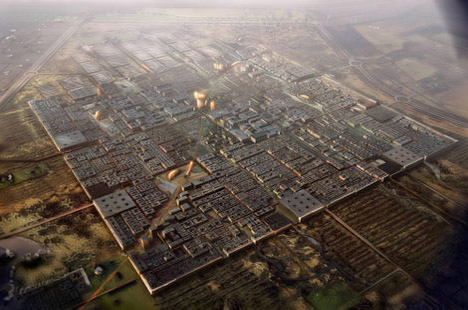 With a projected population of 50,000 people, the planned 6-million-square-metre city of Masdar may seem thoroughly overshadowed by all the cities we’ve already outlined – but when it comes to green living, this is the winner on the grounds of sheer ambition. 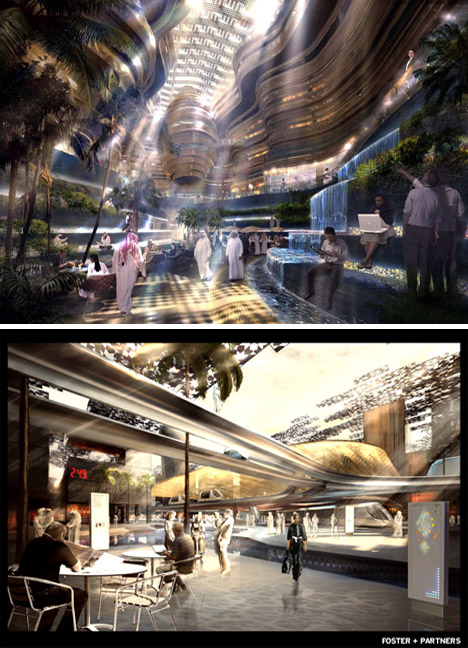 Designed by Brit architects Fosters + Partners and being built by the Abu Dhabi Future Energy Company, Masdar wants to show the world how a city can go green from the get-go. Automobiles will be banned within the city walls. The city’s energy needs will be entirely met with renewable sources including solar, wind and geothermal sources, and even the world’s largest hydrogen power plant. Up to 80% of the city’s water supply will be recycled, and waste will be reduced to as close to zero as possible. (No news on accomodation prices for those lucky 50,000, but we suspect this green utopia comes at a hefty cost).

The environment is top of the list of priorities for Florida’s new urban wonder, Destiny City. Planted on 40,000 acres of Osceola County land, the city is an attempt to make “the Silicon Valley of green technology, in the words of its developer Anthony Pugliese. Once completed it will house a quarter of a million people, with a large proportion of them working in newly-created green collar jobs in the area. Recycling facilities, electric car filling stations, gray water irrigation, a possible biomass power plant producing super-cheap energy – the list goes on. It sounds too good to be true…and since ground hasn’t been broken yet (that’s scheduled for 2011), it’s very early days. In every sense – watch this space. 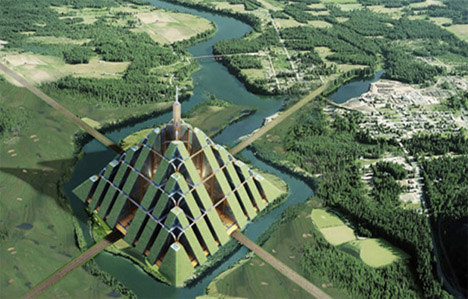 Moving further into the realm of what-if, we have the return of the ziggurat – the colossal terraced pyramids of antiquity, typified by the famous monumental temple at Ur in what is now modern-day Iraq. Ziggurats are back – except on a scale we’ve never seen before. 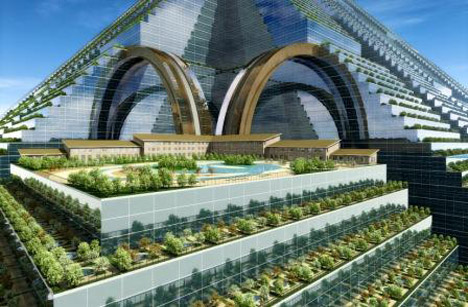 The Ziggurat Project is a proposal for a self-containing sustainable community of one million people. Renewable energy would power this enormous multi-tiered machine, while its occupants would get around using the integrated transport system (removing the need for personal vehicles).

(Images via: Foster and Partners)

A new city proposal with similar designs on the sky is the dazzling Crystal Island. Covering 27 million square feet and nearly half a kilometre high, this structure would house 30,000 people (making it more of a new town than a new city) and its terraced gardens and dynamic frame would moderate the inner environment depending on the season – allowing cool air in and reflecting unwanted sunshine in the summer, insulating and illuminating during the winter. 3,000 hotel rooms, 900 apartments and a thriving business sector complete the picture of the world’s first inhabited steel volcano. 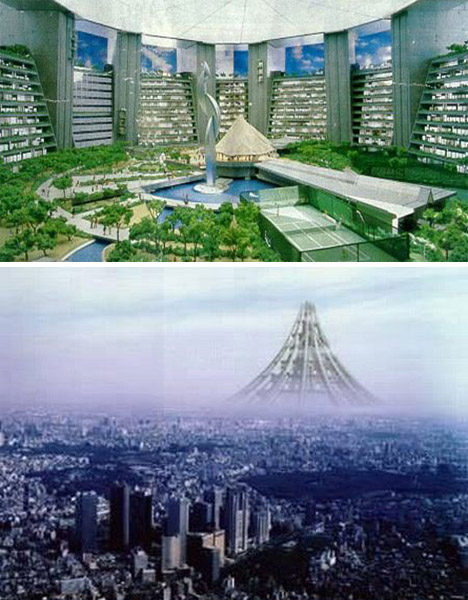 Of course, you can go too far. Take the X-Seed 4000, a building so absurdly ambitious that the designers later admitted it was never meant to be built (they were trying to impress the industry – or put another way, showing off). With a 6-kilometer-square footprint, it would reach 800 floors into the Japanese sky and cost anything up to $900 billion to build. The shape is inspired by Mount Fuji, except (you may want to sit down for this part) the X-Seed 400 would actually be taller than Fuji by 200 metres. Madness?  Here and now, perhaps…but since the design is perfect for lower-gravity environments, is this the first draft of humanity’s first offworld city from scratch?