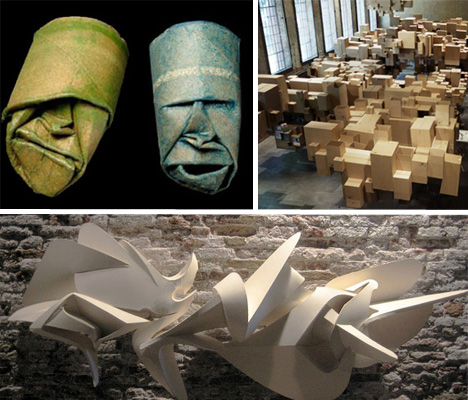 Cardboard is a mundane material, so often cast off and thrown away or recycled – but these 12 artists have transformed it into objects that are anything but disposable.  From expressive little faces made of toilet paper tubes to an entire cardboard city, these works of art range from temporary installations to durable sculptures that are imaginative and eco-friendly. 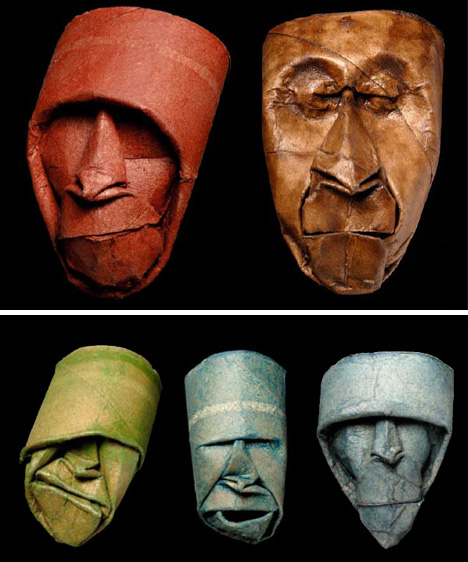 (images via: Village of Joy)

The lowly toilet paper roll has many surprising uses, but perhaps none are quite so full of personality as the ‘origami’ sculptures of Junior Fritz Jacquet. This paper artist paints the inner cardboard tubes from toilet paper and folds them into expressive faces, each distinct and charming despite their humble origins. 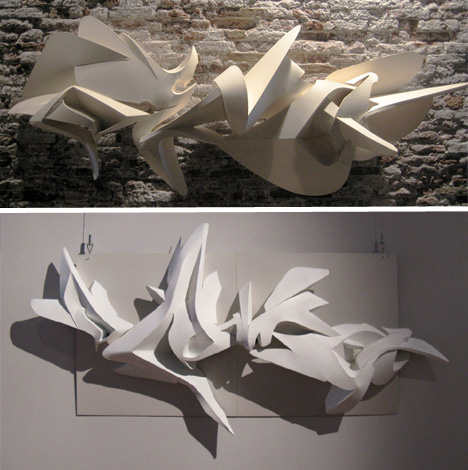 Italian artist Peeta is renowned for his graffiti, but it’s his 3-D interpretations of his art that make him really stand out from the crowd. Cardboard is among the materials Peeta has used to transform written graffiti into complex forms that have been featured in galleries around the world. 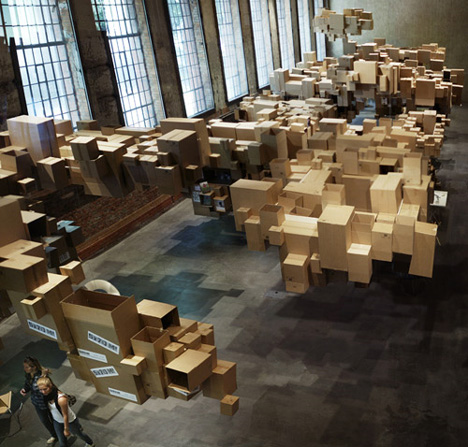 While living in a cardboard box is about as far from high-end architecture as it gets, a firm called Fantastic Norway Architecture managed to make hundreds of them into a unique hanging art installation. The boxes form a pixelated-looking ‘cloud’ suspended from the ceiling at the Center for Design and Architecture. 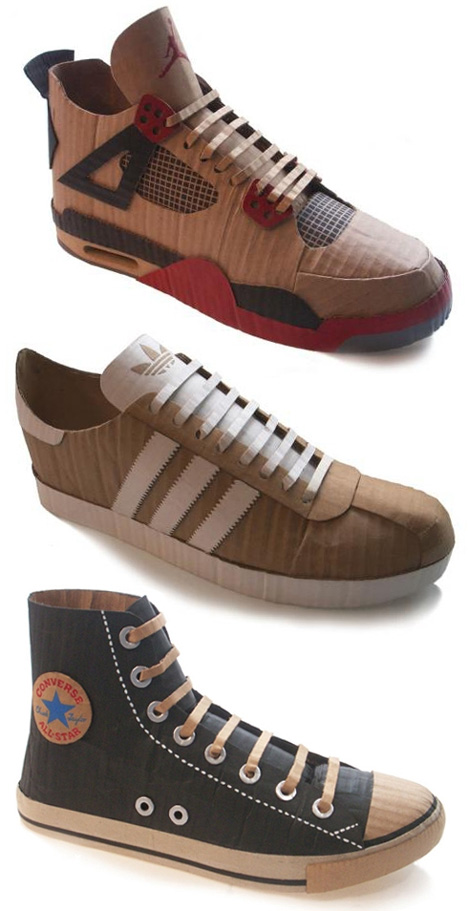 “These are aimed at examining consumerism and the current state of the economy,” Leavitt told Arrested Motion. “I’ve found a rhythm with making them, I’m learning new fabrication tricks which I’m still excited to apply, and continue to have tons of ideas on how to expand the series.” 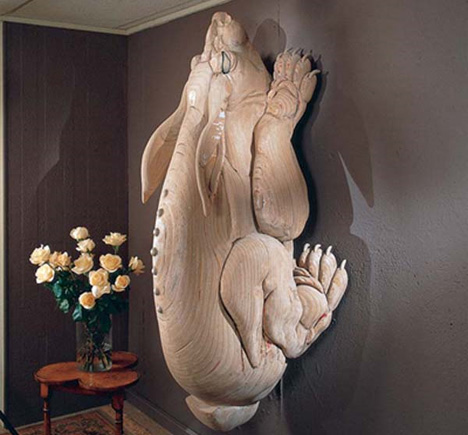 Sculptor Jözef Sumichrast says he can’t find any inspiration in traditional artists’ materials, so he has turned to cardboard, shellac and drywall screws among other unusual media.

Of this piece, Sumichrast says, “Sometimes when I work for a couple of days without sleep fatigue sets in. These are the times when I see movement. Out of the corner of my eye a shape or undesirable object moves across the floor or falls from the ceiling. Recently… one of these shapes was a large rabbit. Though the rabbit appeared only for an instant, its image remains with me.”

“I did not want to completely refine or cast this piece. The image came and vanished so quickly that I felt it needed an unfinished appearance. The medium for “Wall Rabbit” is industrial cardboard. The use of cardboard is a backlash against technology. However, I have found that when this lowly material is sanded, it is elevated to velvet.” 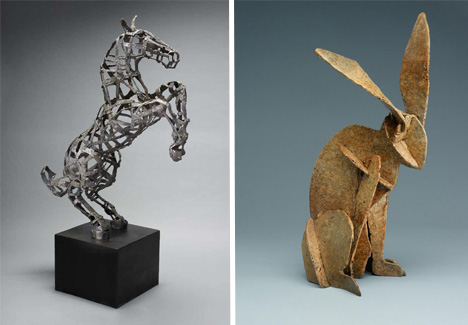 Artist Paul Orzech’s sculptures don’t look like they’re made of cardboard either – but that’s because they’re not, technically, though the material plays a large role in his technique. But Orzech uses strips of cardboard to form his designs before firing them in a kiln, resulting in cavities that are filled with molten bronze. 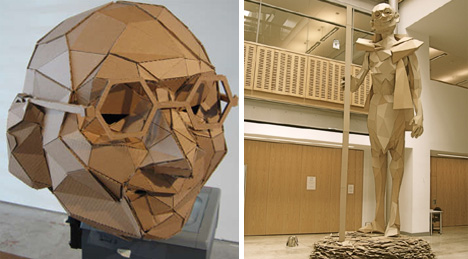 Artist Joseph DeLappe created a 17-foot-tall cardboard figure of his avatar in the video game Second Life, MGandhi Chakrabarti. In March of 2008, DeLappe and his avatar walked through Second Life for 26 days to reenact the real Ghandi’s 1930s Salt March. DeLappe used a Nordic Trak Walkfit to travel the 248-mile length of Gandhi’s original march, six hours a day for 24 days, converting his steps into those of his avatar. He provides instructions for creating the cardboard Ghandi at Instructables. 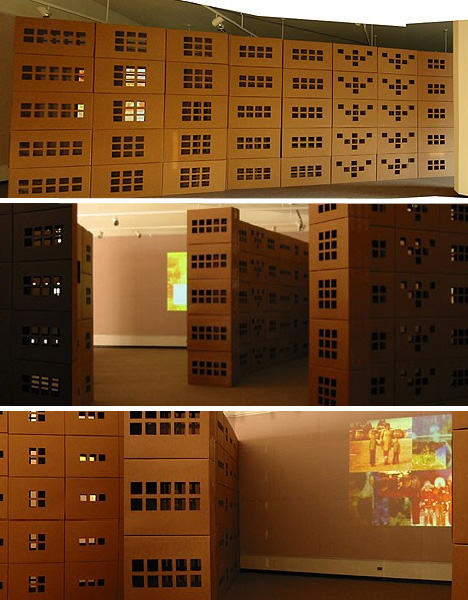 Miika Nyyssonen used cardboard as the main component in his interactive Olin Hall Gallery installation ‘M the Machine’. 700 cardboard boxes were cut according to ten different models, each surface containing between one and ten square holes that provide partial views of other interior spaces and of three sets of home movies from three decades as the viewer moves within the work, simulating the workings of memory. 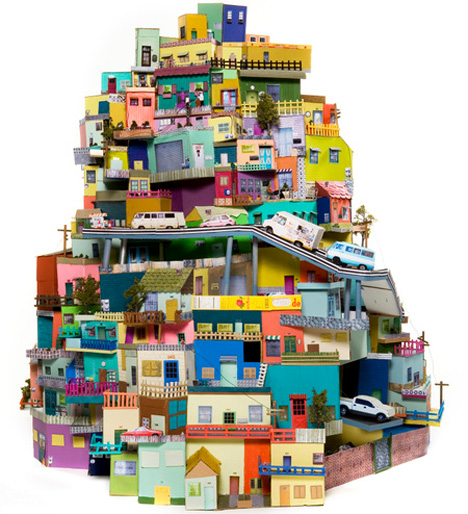 The colorful and whimsical cardboard sculpture of Ana Serrano, including the pictured piece ‘Cartoonlandia’, are tiny imaginary worlds brought to life. The artist says, “Recently I’ve been working with cardboard because I find it easy to handle and manipulate, but also I like that it’s a mundane and familiar material.” 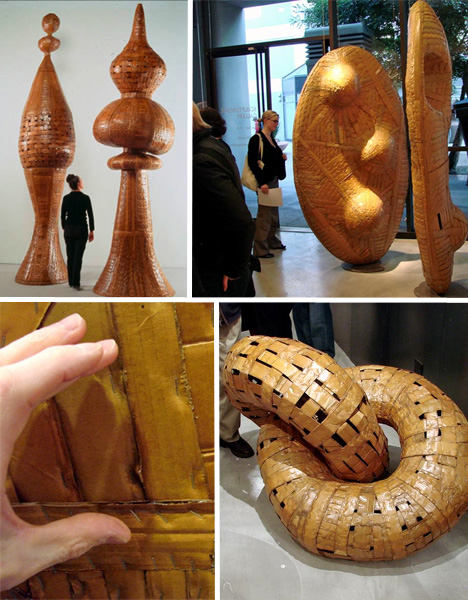 Ann Weber’s gourds, spires, pods, Russian samovars and other figures stand as tall as 16 feet, towering over the artist herself and shining with a patina of shellac. Weber, of California, began her career as a ceramic artist but began working in cardboard in the early ‘90s, intrigued by the idea of using such mundane materials. 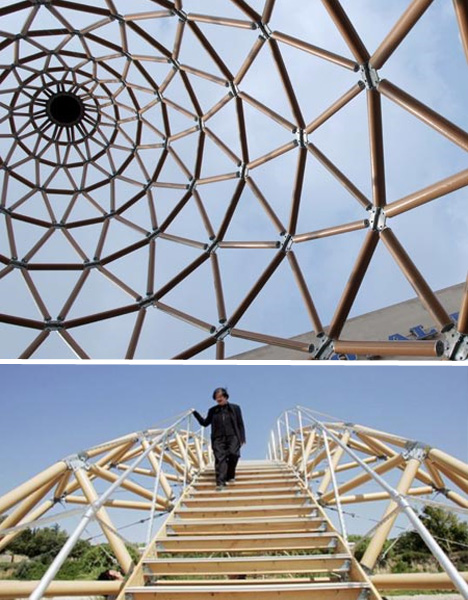 Is cardboard strong enough to be used in real architectural structures? Shigeru Ban believes it is, and he has created several surprisingly sturdy structures to prove it. Among his creations are a bridge across the Gardon River of France and a temporary tower on the South Bank in London, both made from cardboard tubes. 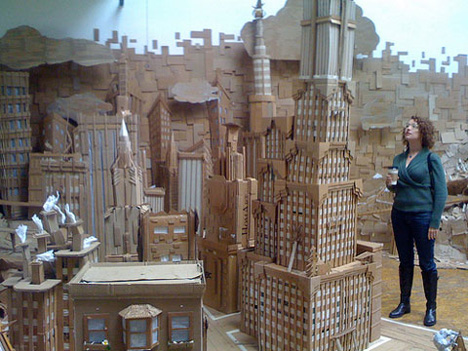 Not to be outdone by any other artist or organization, the Cardboard Institute of Technology created an entire cardboard city called “Cardburg”, exhibited at the Cell Space gallery in San Francisco in 2008. So what, exactly, is the ‘Cardboard Institute of Technology’? It’s a group of cardboard artists who, according to their website, “pride themselves in their well-honed hot glue and box-cutting skills.”