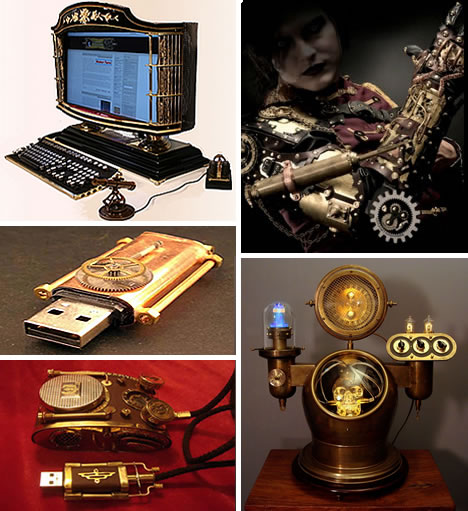 Steampunk is the mating of technology and romance, breeding some of the most wickedly cool gadget’s and art you’ve ever seen. It’s cool and brass-clad sexy. With a post apocalyptic type of rebellion, Steampunk enthusiast mod almost everything you can imagine and then some. This amazing urban art movement was birthed on the Internet, so it’s no wonder hi-tech hardware hackers are romancing technology with a Victorian passion, yearning for the aesthetic realm of The Time That Never Happened; Steampunk – where the future meets the past. Here are some of the slickest mods, 26 sexy Steampunk art and hi-tech hacks. 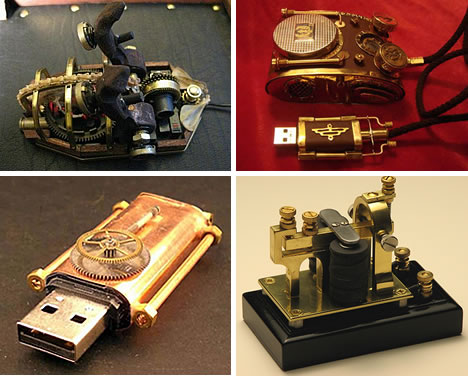 The top two are fully functional modded mice, each is a one of a kind shiny handcrafted brass wonder. The USB drive holds 2GB of storage, but if you take this slick stick to work and someone tries to walk off with it, the vintage look with copper and brass gears, pipes, and bolts will make whoever uses it stand out in a crowd. RSS feeds, are you addicted to them? At one historic time, people were addicted to news coming hot off the telegraph. The shiny yet vintage telegraph machine is reborn as an RSS feed gadget. 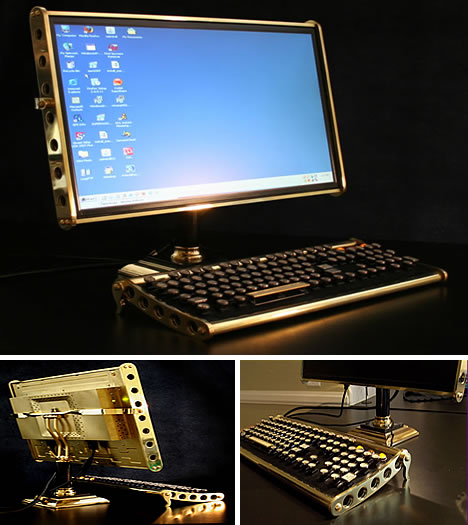 The Datamancer is an expert in steampunk-style technology. He is a Master of Mod. The 22″ widescreen LCD frame is solid 1/4-inch brass that was sanded and polished to a high shine. The base is a modernized remake of brass and black marble. The keyboard is a mixture of Neo-Victorianism and brass hi-tech. 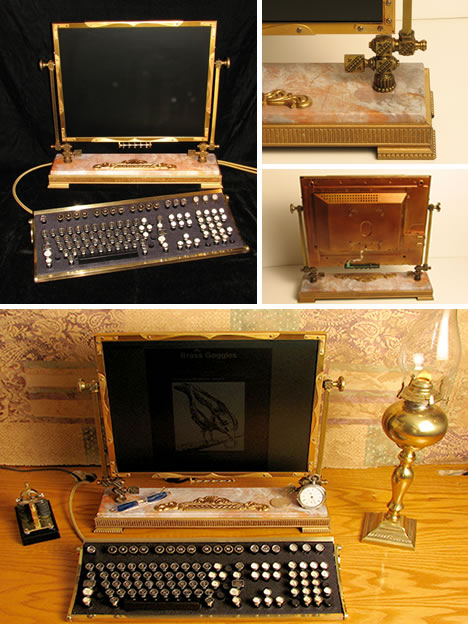 Jake von Slatt is another computer mod icon on the steampunk stage. This Steampunk Desktop has a base made to look like marble. His hardware hacks to this flat panel LCD include knobs, gold painted pieces and plenty of brass.  For more retro-tech goodness, he added a brass keyboard and kerosene lamp. Jake von Slatt operates the Steampunk Workshop where you can find step-by-step directions to turn your computer into Victorian style and the Age of Scientific Wonders. 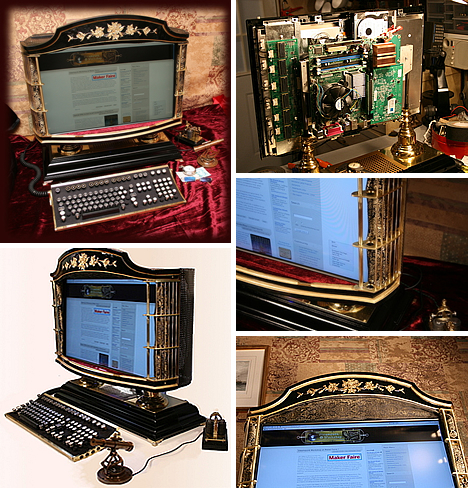 In this mod, Jake von Slatt researched Victorian era stages and discovered they were approximately 4:3 aspect ratio – the 16:9 wide-screen ratio from the cinema. He coated the 24″ wide screen monitor base with black spray lacquer and topped the supports off with some pieces of a brass chandelier. Then he fashioned monitor curtains for the stage on the frame. Finally, he completed the Victorian All-in-One PC which has Kubuntu 7.10  (Gutsy Gibbon) installed and is fit for the office of Queen Victoria.

The Datamancer reached out to millions over the Internet with this Victorian laptop mod. With this hack, he converted unknown masses to the aesthetic realm of Steampunk. This mod is so cool, yet it’s steamy hot. Who knows? The Datamancer’s next mod might be so hot that the heat wave will hit and crack your hard drive. 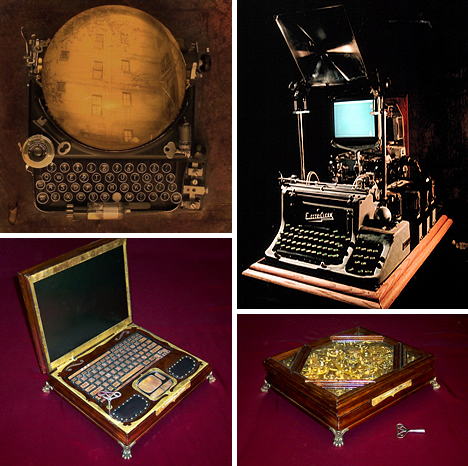 More and more people crank out fabulous Steampunk fabrications. At top left, that computer was named Windows Vista 1907. Yet the top right computer is a blend of science fiction and industry in a piece called The ElectriClerk, fashioned from a 1988 Macintosh SE computer, a c.1923 Underwood typewriter, and a fresnel lens by Andrew H. Leman. The Victorian looking jewelry box is another laptop mod by Datamancer. 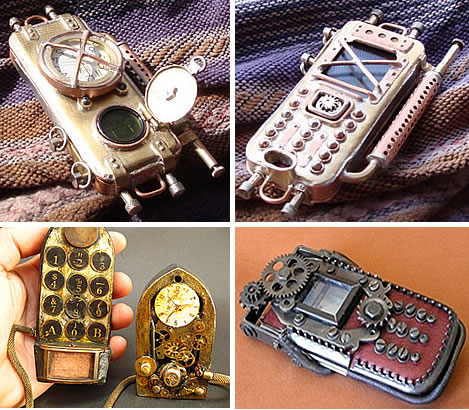 Even cell phones have not escaped the aesthetic realm of Steampunk. These are made from recycled materials, vintage gears, old iron and other metals. The top two cells phones are from Russia with love. The workmanship on all four mobile phones make these modded gadgets a hot item. The bottom right phone was created from a Nokia, back when it was boring and not yet a symbol of grandiose invention. 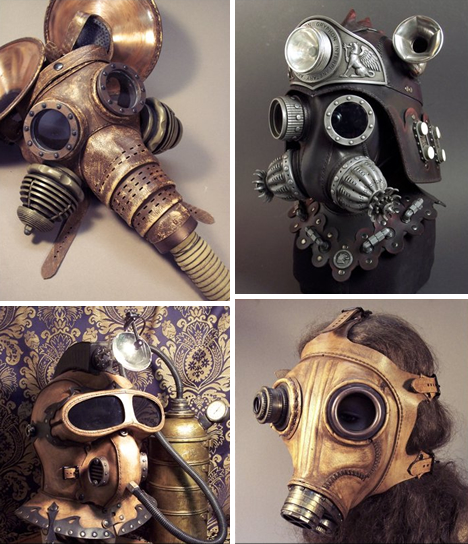 The incredibly talented Tom Banwell dabbled in a variety of media, before his one of kind talents and interests combined the arts of history, costuming, mechanics, and fantasy. He admits to being wildly creative with his leatherwork. On the top left is Banwell’s Pachydermos mask, followed by Sentinel, Underground Explorer on the bottom left, and the Fire Master mask. 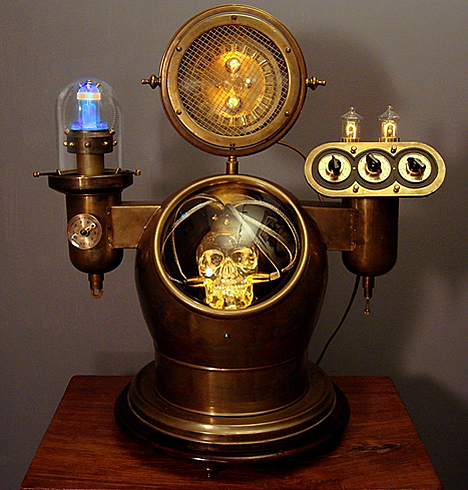 Known for many Steampunk designs, Art Donovon created The Electric Skull for The Museum of Oxford Steampunk Art Exhibition. Donovan made this 27″ tall, comprised of solid brass, light, glass, and acrylic. The fact he is also handy with the craft of electric skills no doubt helped make this glowing skull gadget an extremely slick mod. 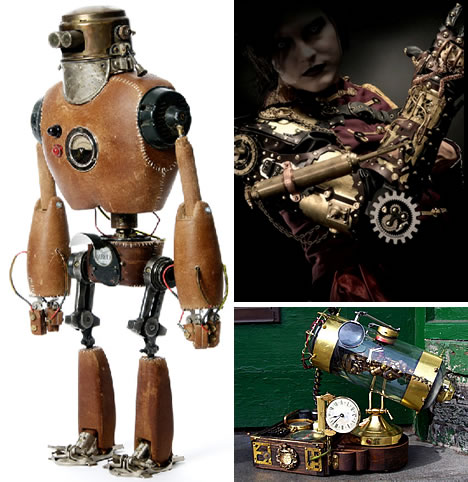 The trio above were fashioned for The Museum of Oxford Steampunk Art Exhibition. The large leather robot was created by Stephanie Halleux, only one of her leather robot masterpieces. If you visit the exhibition, going on now at Oxford University, you can view Amanda Scrivener’s Lord Featherstone’s Clockwork Arm up close and personal. The bottom right is a creation from Molly “Porkshanks” Friedrich. She states, “I also lavish attention to detail and try to imbue each item with a narrative of some sort so that it feels more like an artifact from another place and time.” 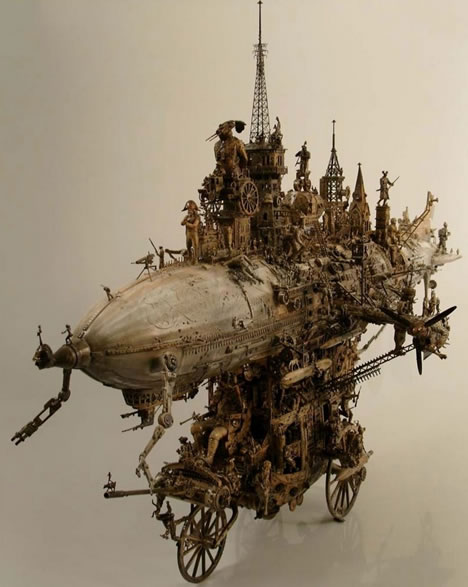 Kris Kuksi’s art speaks of a timelessness, of potentiality and motion attempting to reach on forever, and “yet pessimistically delayed; forced into the stillness of death and eternal sleep.” He themes his art to teach us “that although death may pursue us arbitrarily, we should never neglect to mourn the tremendous loss of individual potential.” This art is entitled, Caravan Assault Appearatus.

This is Tom Sepe’s Steampunk Motorcycle on BRINK TV. This electric motorcycle gives off steam like a piece of the past mixing with a moment of time from the future.

If all this retro-futurism has left you yearning for more from the realm of Steampunk, check back next week for sexy as sin Steampunk artistic designs.