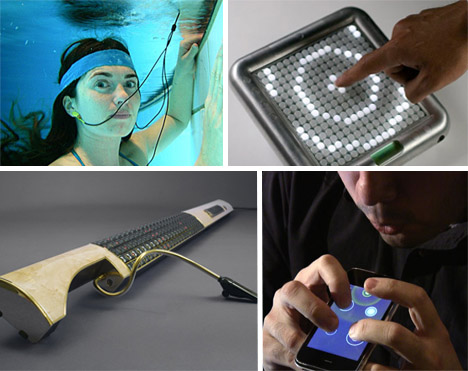 The study of musical instruments (‘organology’ – no, really) is the study of the human condition. Every culture is defined by its own distinctive set of trills, whistles, parps, honks and beats, and every corner of the world has evolved its own location-specific indigenous instrument to renew a sense of cultural identity through noisy self-expression. And instruments evolve – never more so than now, in the midst of a technological revolution that has opened up entirely new ways to make music. So settle back and compose yourself as we look at ten new instruments that look set to accompany us into the world of tomorrow. 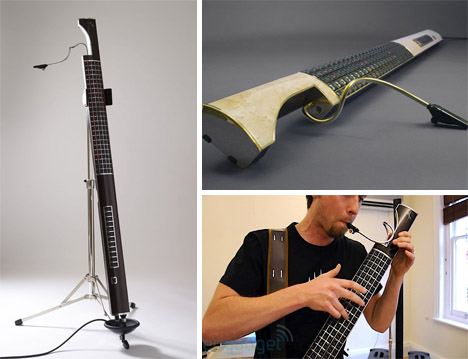 (Images via: Eigenlabs and engadget)

In development for 8 years with funding of over £10m / $16.5m, the Eigenharp is a slow-crafted technological marvel. 120 keys (each one tilting to give a flexible tone), percussion buttons, built-in sound management capabilities including recording, playback and looping, and a potentially limitless range of noises thanks to running on uploaded digitally sampled sounds. It is played via keyboard, tap-pad and mouthpiece – and the result is an instrument that sounds like a band. 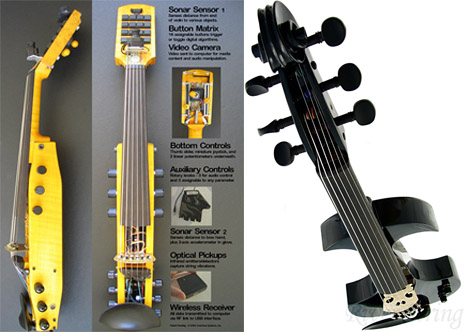 (Images via: Wired and Riverstring)

Similarly digitally enhanced are the electric violins, a family of new hybrid instruments that are sufficiently well-established to become a mainstay of the modern music scene. Thanks to electrical pickups inside or outside the instrument’s body, the violin’s vibrations are run through electronic processing and transformed into any sound under the sun – most effectively, the noise of an electric guitar. Witness the magic of Ed Alleyne-Johnson performing on the streets of Chester, England. 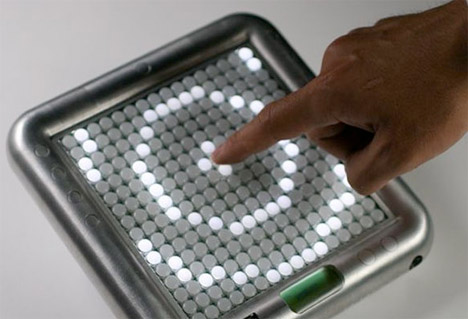 No, this isn’t the first good-to-go version of Minesweeper: this baby is for making beautiful music with.  The 16 x 16 grid of LED lights on the Tenori-On responds to touch and to real-time looped programming, creating soaring, rippling compositions that mesmerise beginners and experts alike (Peter Gabriel is a fan). If you want a hands-on demonstration of its power, try Andre Michelle’s ToneMatrix, an online AudioTool-powered simulation. 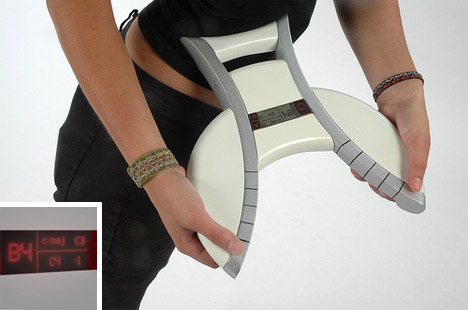 Musical instrument or chest expander? You’d be forgiven for asking – but the Samchillian is a new, ergonomic-minded take on the keyed instrument, with each key representing a relative, not fixed, note. As the musician plays, the function of each part of the instrument is constantly changing, allowing a full range of musical expression (provided the player has a really good memory, of course). 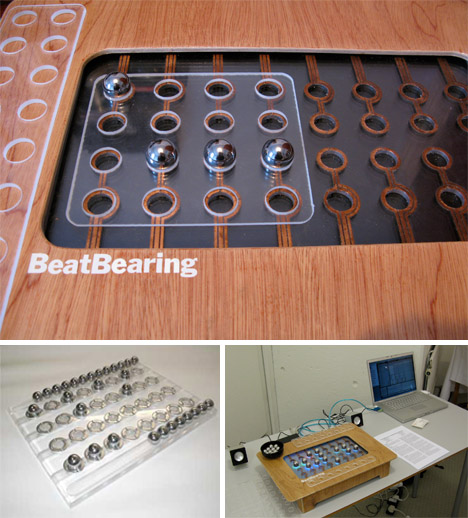 And moving further into the realm of instruments that look like anything but – we have the BeatBearing. Instead of generating noise itself, the BB triggers the timing of preselected types of percussion – simply drop a steel ball-bearing in the right slot to get the beat you want, when you want. The inventor isn’t interested in manufacturing his design: instead, he has published the plans on DIY-tech online magazine MakeZine to encourage people to build their own – and with more than 1 million views of the Youtube demo (below) at the start of this year,  we reckon there will be plenty of takers. 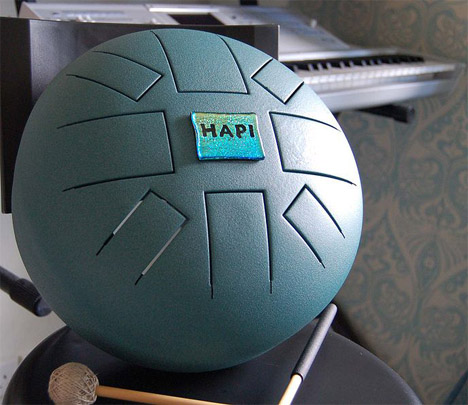 At least the Hapi looks like what it is (well, kinda) – a steel drum with a hole in the base that allows the player to control the amount of noise emerging, using their lap. Since each key (or “tongue”) is part of the main body of the instrument, each note is accompanied by a subtle resonant harmony from other musically compatible notes. Time for a demonstration, methinks… 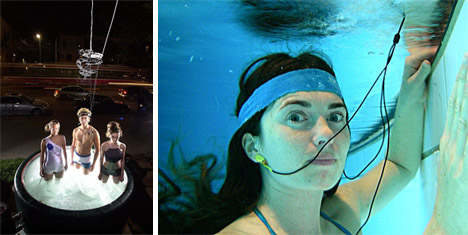 At first sight, you’re looking at a lady trying to listen to her iPod underwater, and a collection of buff young people stood up in a hot-tub. In fact in both pictures depict music-making, via an electroencephalophone – a device that converts brainwaves into sound (and therefore a quintephone). The lady is psychotherapist Ariel Garten participating in a concert performance – and the “hot-tub” trio are an electroencephalophonist and two assistants accompanying on electrocardiophones.

Now to the merry, messy world of the hydraulophones. Water flows out holes in the instrument, and the player uses his fingers to block or divert each stream, triggering internal mechanisms – discs, shafts or valves – that produce sound. In other words, it works like a woodwind instrument, except the wind is replaced by water (which doesn’t directly create the sound).

(Images via: Jay Silver via Wired)

Daring you to not burst out laughing when it gets underway is the Drawdio, a homespun theramin. There are a number of ways to make one (cheaply and easily), but the working principle remains the same in all models – it runs a current through the graphite deposited from the end of your pencil (or any other appropriate medium, including yourself), and translates it through a synthesizer to create a noise like a kazoo in a gale.

But for breadth of lateral thinking, hats off to Smule, the inventors of the Ocarina iPhone application. Using the phone’s built-in movement sensors and touch screen, your phone becomes either a wholly keyed instrument…or a kind of flute, by detecting the passage of your blown breath and translating it into intensity of sound. Once you’ve finished your piece, upload it to the Ocarina online community and listen to the work of others. A virtual instrument that automatically shares its output online – can you get more contemporary than that?