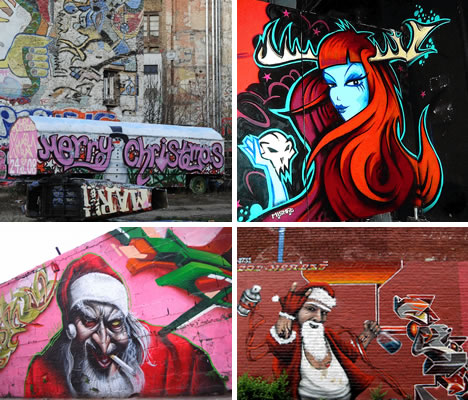 Graffiti decorates walls, subways and trains all over our globe. Since the first tags appeared in the 1970s, graffiti has grown in popularity until now it can be a commercialized venture. Legalization offers the graffiti artists a chance to spread their message over entire murals. Spray paint in aerosol cans is the primary method of production, however different techniques, styles and even ability levels keep graffiti as varied as the artists who create it. The debate rages on if graffiti is art or vandalism. Whether freaky or fantastic, one common theme to all of these writers and their street art is the spreading of holiday cheer with these 40 Merry Christmas graffiti greetings. 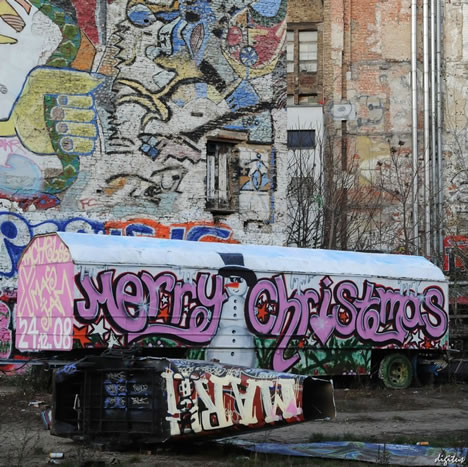 Kunsthaus Tacheles in Berlin was once a large department store but now is run by artists. The exterior has huge, colorful graffiti-style murals. As you can see, the graffiti flowed out in a cheery greeting of Merry Christmas. 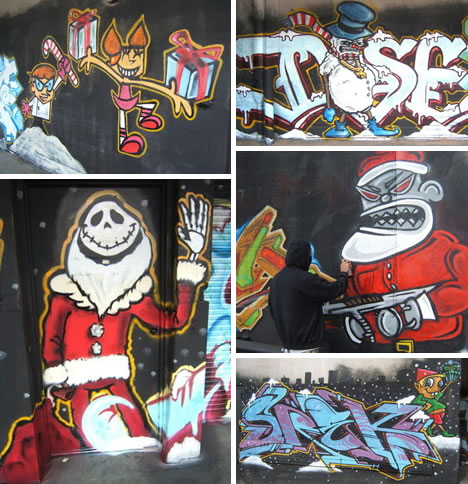 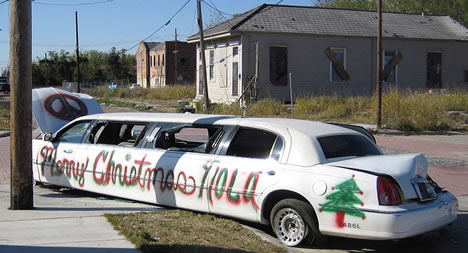 This limousine was tagged after Hurricane Katrina in New Orleans. The Christmas graffiti occurred after Wal-Mart was looted. Even in the midst of disaster and bad times, street artists who some consider vandals still tried to offer peace and season’s greetings. 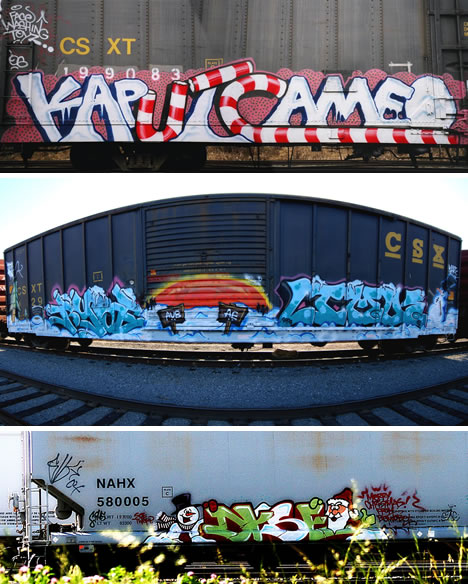 Trains are an extremely common place to find graffiti. Street artists tag trains and send their graffiti on its way to chug through an endless path of cities and towns. Trains are a popular target all over the globe. Many graffiti loving people post their artistic finds such as candy-cane train, the blue famous freight train painted end-to-end with Christmas graffiti, and the Merry Christmas tag on the bottom train. 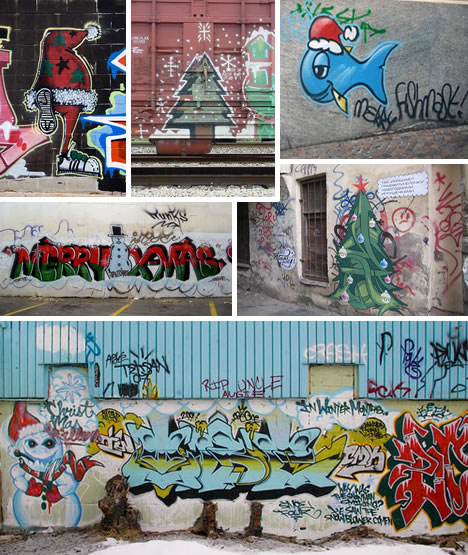 Some graffiti is simple. The point is to tag and run. These spray paint tags started in NYC and Philadelphia but now are found all over the world. Tags are not always about gang markings. It is a debate among many if graffiti is a form of street art or vandalism.  From sweet or funny tags to more sinister Christmas works, urban walls and trains are common places for graffiti writers to leave their holiday message. 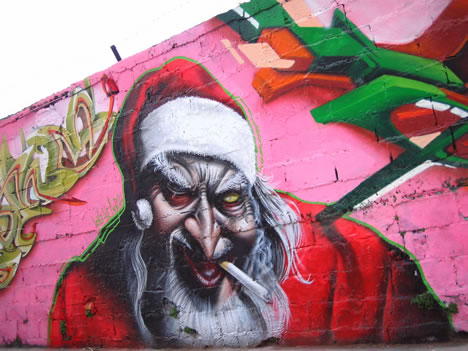 This wall was photographed and posted as Evil Santa. This particular wall can be found in Greece. With a project this large, the undertaking is much less of a tag and more of a celebrated work of art. Graffiti in all forms can be found spray painted in all corners of the planet. It is one more common bond that makes us all united, as is celebrating this holiday season. 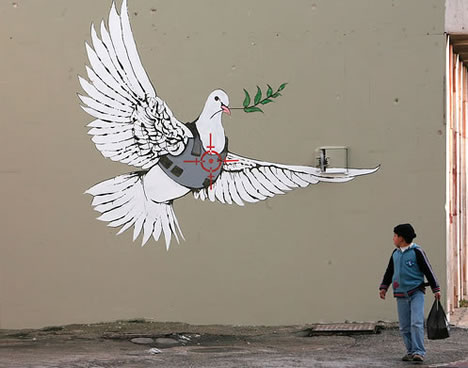 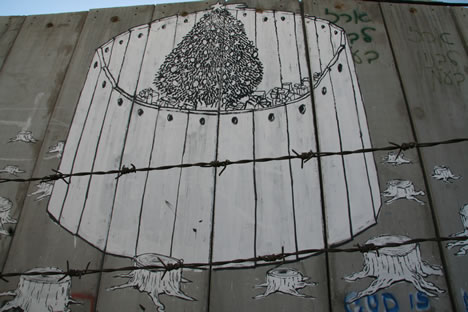 Beloved graffiti artist Banksy visited Bethlehem in December 2007 and left his art in a series of subversive murals. A Palestinian boy looks at one of six images painted by Banksy as part of a Christmas exhibition. Also on “the wall” of Bethlehem, a painted lone tree stands among scores of cut-down olive trees and confiscated land. It is not uncommon for graffiti to still send a political message. 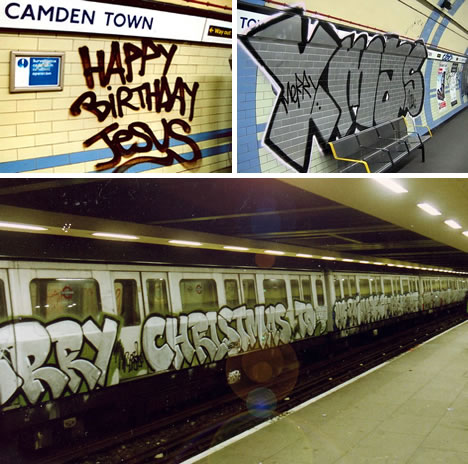 Subways are another popular place for graffiti artists to tag. It is dangerous because of the moving cars and due to law enforcement cracking down. Writers still tag subways though, even to send their holiday greeting. In the bottom image, this whole subway train is decorated in end-to-end high style. Car 1 says, “MERRY CHRISTMAS TO” while Cars 2-5 have the names of graffiti writers and crews. Finally on Car 6, it is signed, “FROM ROBBO & DRAX”. 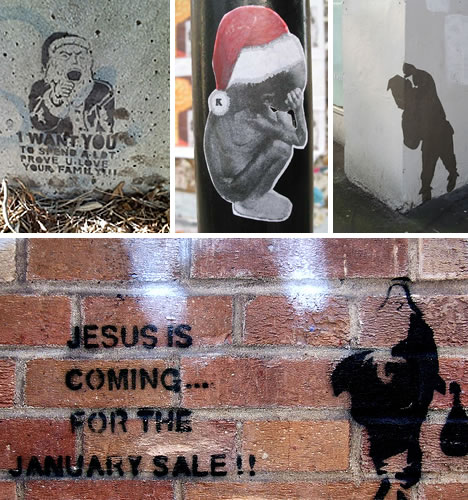 Stencil and pasted graffiti is some of the fastest tagging that can be done. The effect is usually mass produced in many areas as opposed to the writer with a spray can whose work is a one-of-a-kind. Although stencils can be created to deliver any message, many of the holiday ones have a sharp sarcastic, humorous, or political edge. 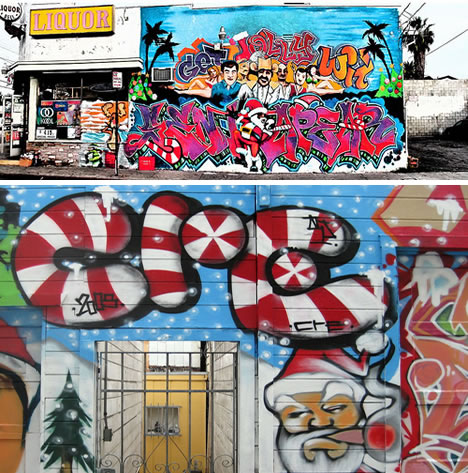 In cases such as these, graffiti is celebrated not as vandalism but as works of street art. Sometimes store owners ask writers to display their art on the store front. Above are two examples of Christmas graffiti greetings covering the entire front of buildings, top to bottom. 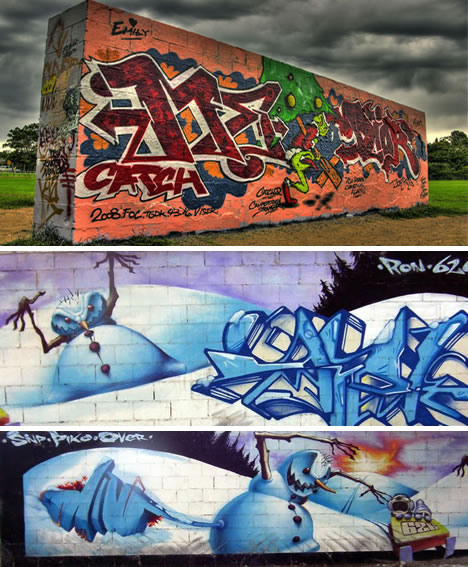 In some cities throughout the world, graffiti is encouraged to help keep writers out of other kinds of trouble. Walls are set up in parks for the specific purpose of inviting writers to show off their art. 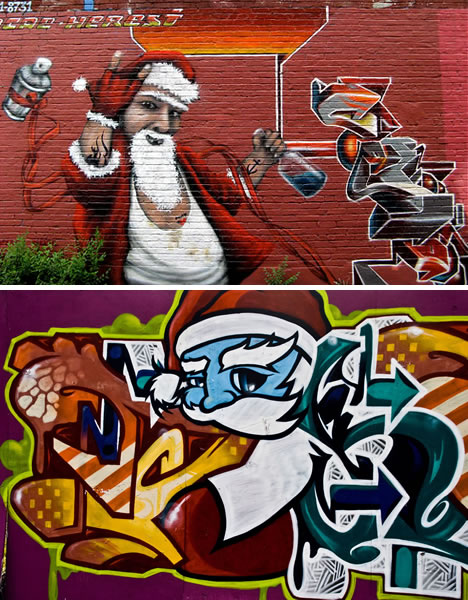 Legal graffiti can be major and celebrated works of street art. Aerosol artists take advantage of this invite and spray their Christmas greeting for one and all to enjoy, without risking fines or jail time. 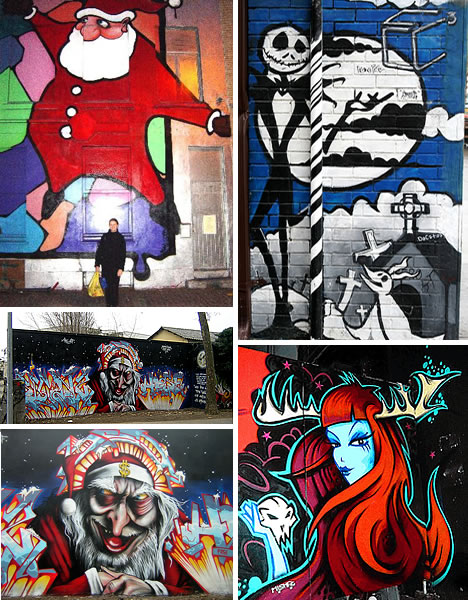 If given time and permission, graffiti can become a huge wall mural or a very detailed picture. Around the holidays, graffiti under the name of street murals are encouraged in many places around the globe. Certain walls or temporary “billboards” are built for the specific purpose of holiday street art. 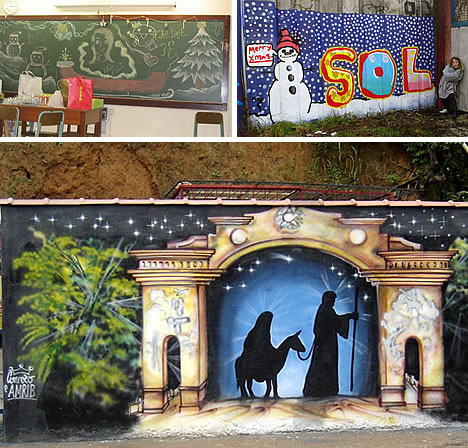 It is up to each individual to decide if graffiti is a work of art or a work of vandalism. Consider however that drawing on chalkboards are encouraged for young school children. Are these the future graffiti artists? At what point does it go from art to destruction of property? Everyone recognizes graffiti even if they don’t totally understand it. If more murals were encouraged and legal, then even more Christmas graffiti greetings would no doubt be decorated to spread holiday cheer.