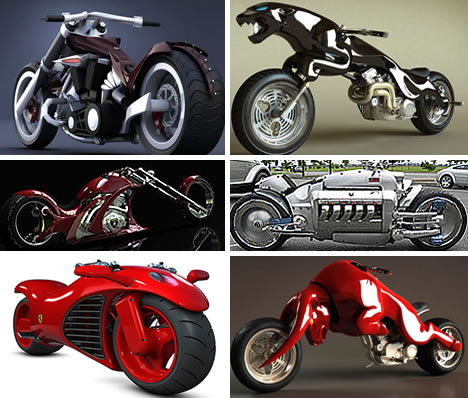 Lean, mean and sometimes even green, concept motorcycles often make us want to head out on the highway and look for adventure. These bikes may not be quite ready to tear up the road as we zoom into the wind, but we wish they would move from concept to reality very soon! Buying a motorbike, whether it is one on the market or ones pictured below, they can be quite pricey, especially if you don’t have the money. But with help from companies like Superbike Loans, you shouldn’t have any problem. Just like a car, you can get a motorbike on finance. One day, you’ll be able to afford the ones in the photos. As we take a look at concept motorcycles, here are 20 of the most bad-ass bikes to hope for in 2010. 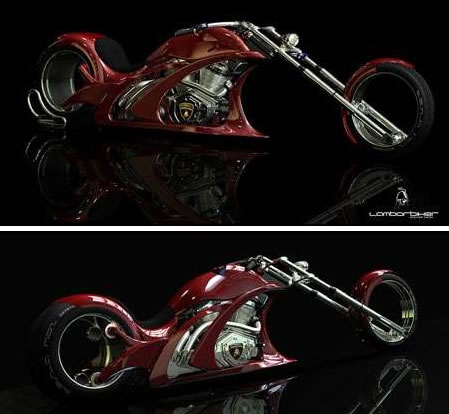 Flavio Adriani took his inspiration from two great names in invention, engineering and design, Nikola Tesla and Ferrucio Lamborghini. Flavio has created some stunning motorcycles from his concept. We want this bad boy to become reality soon! 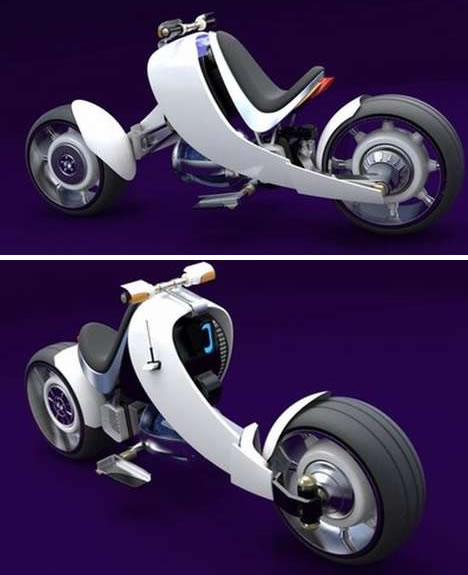 Romain Herment has a motorcycle concept that uses nuclear energy as a power source. He calls it “Motorbike 2050 version 2.” This futuristic bike uses two inexhaustible natural elements, deuterium and tritium, allowing a sustainable ride in the days to come. The motorbike consumes 1 liter of water for a 100 km drive. 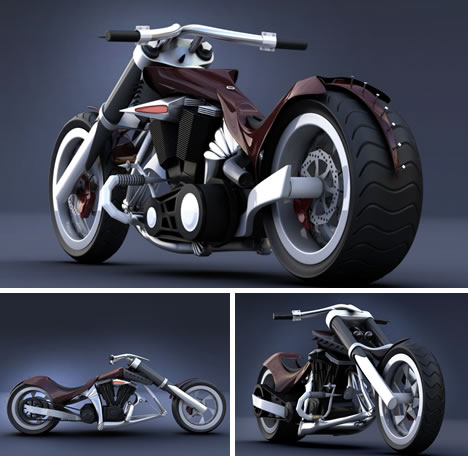 The Aitu seems to be rough and rowdy, ready for Mad Max to take it for a spin. Designer Renato Gschwend is hoping to attract adventurous souls who want to make heads turn if this bike ever hits the street. It features a powerful V-twin 1800cc engine and non-silent exhausts to ensure you’re heard roaring down the highway. 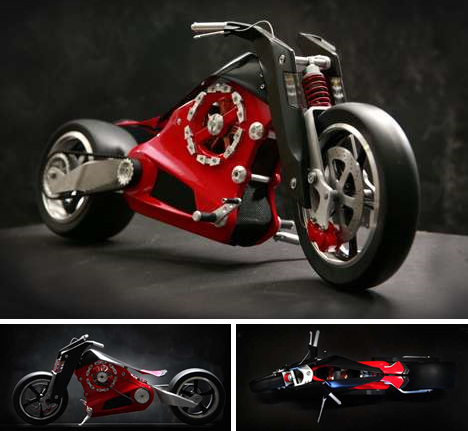 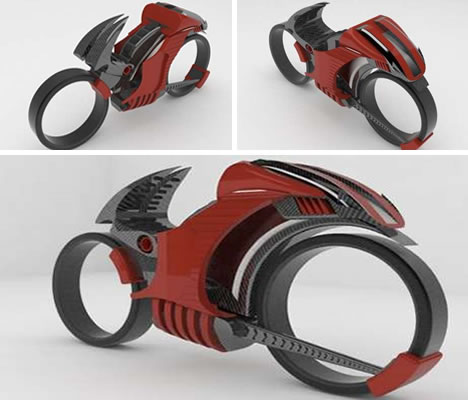 Designed by Julian Silva, this concept motorcycle is covered in carbon fiber for a fast and light ride. The framework is made of aluminum and wrapped with carbon fiber panels that store the mechanical systems. This motorbike was designed to encapsulate the pilot´s arms, legs and back through the secondary red panels and to keep the driver safe in case of a fall. 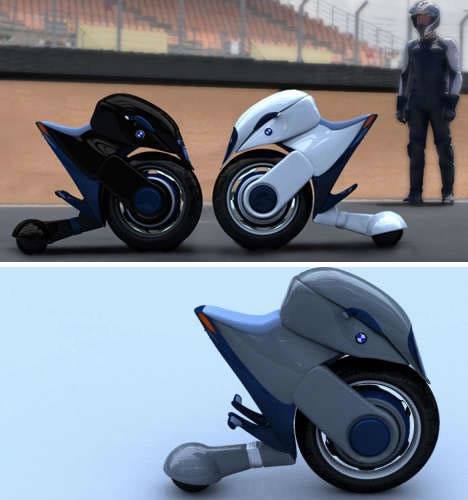 Designer Pierre Yohanes Lubis thinks if you would like a very fast, very dangerous, very tiny motorcycle, then the Halbo might be for you. If it gets beyond concept and hits the main highway, let’s just hope you don’t hit the pavement too because it could be much worse than road rash. However, it does have a BMW stamp on it and is electric powered. 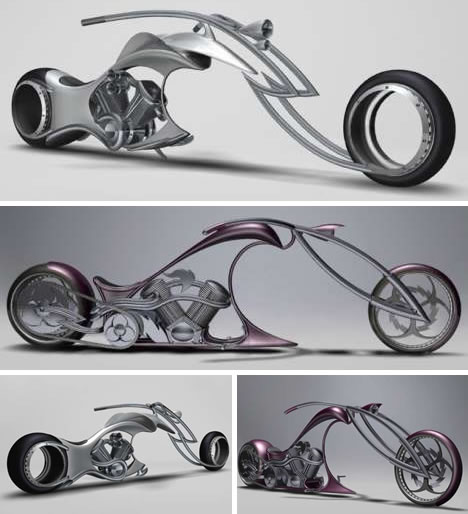 Designer Alexander Kotlyarevsky peered into the future and then created both these concept motorcycles. He molded their alloy frames into a minimalistic design. The sleek silver hotrod is called Swordfish while the metallic pink bike is called Stalker. This futuristic duo is like his and hers for a rebel ride. 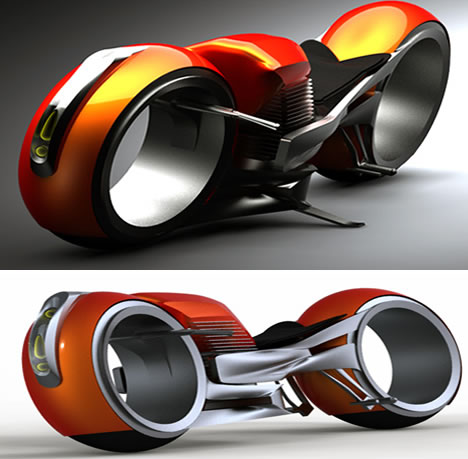 Will the Harley Davidson Hog of the future resembles this beast? Designer Miguel Cotto believes so. The large 883cc engine is coupled with a Tron-like body. The wheel hubs are actually giant bearings. 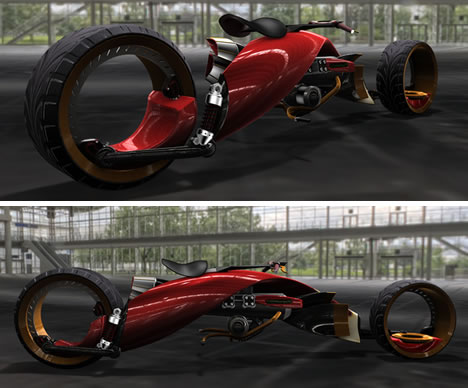 Designer David Gonçalves has created more than one futuristic motorcycle. This project, however, started with a request from one of his clients who needed a bike for a cartoon superhero. A female superhero at that. Inspiration struck him and the concept of Strider was born. 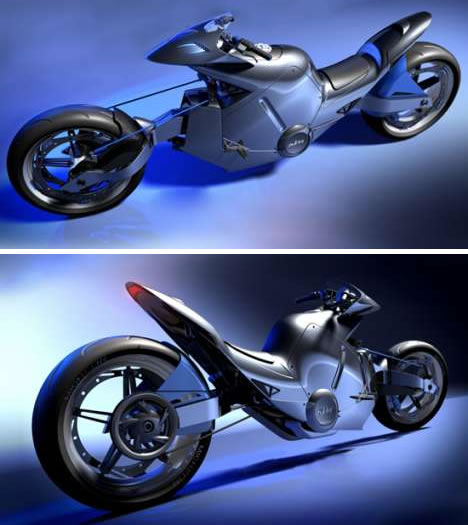 Designer Matt Williams created a superbike called KTM Motorbike. Vroom must have been the mantra playing while creativity blossomed. KTM looks ready to leap forward, looks fast even when parked. The V-twin engine is hidden within the frame. Its hub-center steering system provides a more usable steering angle than telescopic forks while the center is a more stable and predictable ride. 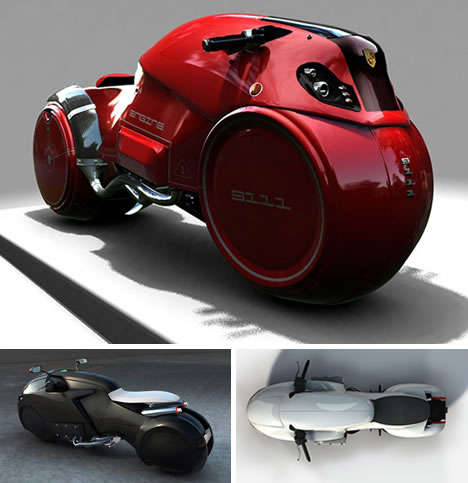 Conceptualized by Enzyme Design, the Icare motorcycle is meant to be the Aston Martin of the two-wheeled world with a six-cyclinder 1.8 Honda engine. It looks like a muscle motorcycle of the future, ready to rip up the road and outrace the cops in hot pursuit. 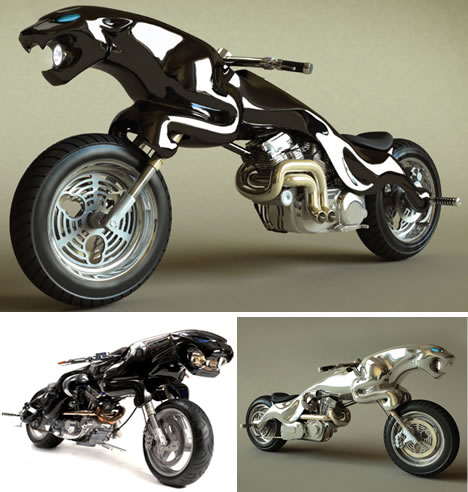 This roaring jaguar is the brainchild of motorbike fanatic Barend Massow Hemmes. The Jaguar concept motorcycle has only been taken up to speeds of 55 mph, but you better believe heads turn as fellow bikers drool. The big cat is powered by 1200cc Harley-Davidson V-twin engine. The shape of this sleek cat is not suitable for anyone under 6 feet, meant to have feet propped far up front on the pedals as a real drag-style riding machine. 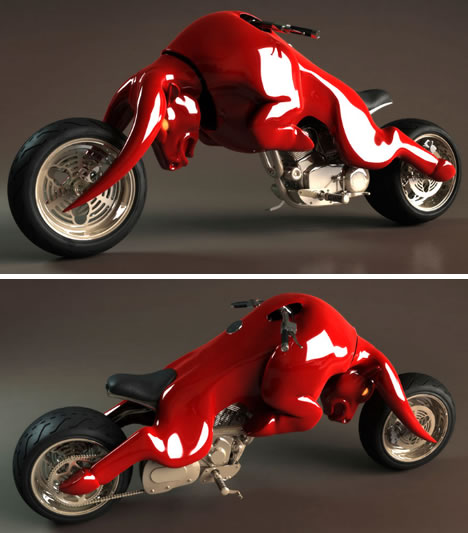 Designer Barrend Massow Hemmes was struck again with inspiration after the Jaguar and tackled this shiny bull. He had to think hard and long to figure out how to get the bull’s horns positioned on this bike. Red, loud, and shiny, the Bull concept motorcycle will surely call to some bike lover to be made into a reality. 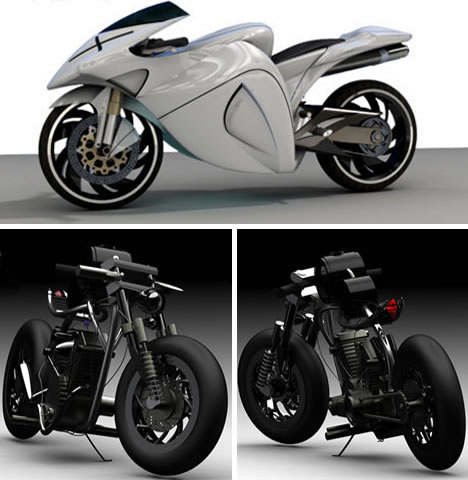 What does a ghost and devil have in common? They’ve been turned into slick speed machines, or at least concept motorcycles. Designer Muhammad Imran designed Ghost while keeping a flying falcon in mind. He was also inspired by the bike tribute of “Ghost Rider.” Ghost calls out to the young and reckless and will hopefully offer fantastic future fun to those who really have a need for speed. Designer Robert Liddell aimed to give his motorcycle features fitting for the name Devil Bike. He created it with V-twin engine, so this shiny black bike will fit the personality of the young with a passion for speed and style. 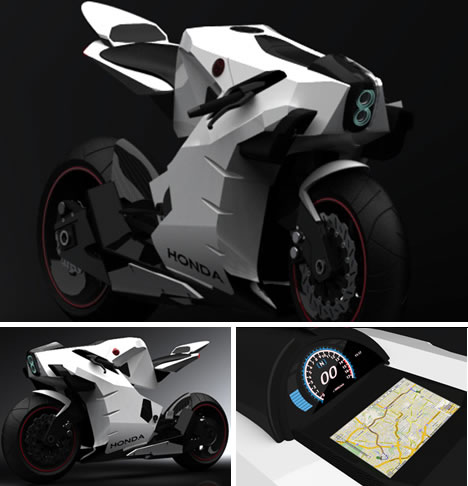 Designer Igor Chak came up with this concept bike, 2015 Honda CB 750. The brains of the bike is the on-board computer that can be controlled through a 5” OLED multi-touch display positioned right on the fuel tank. There are 3 menus: GPS, drive modes, and diagnostics mode. CB 750 gets its power from a four-cylinder liquid hydrogen engine. Ready, set, rocket outta here! 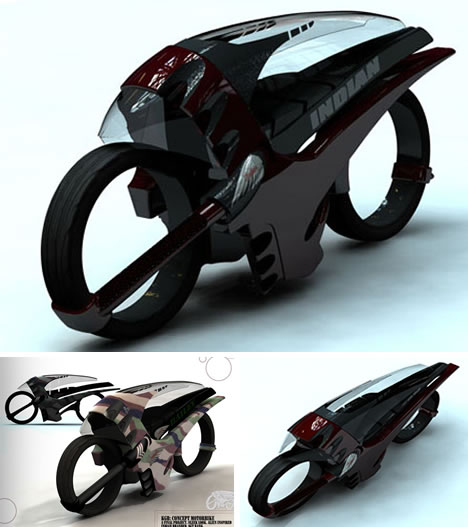 Designer Daniel Bailey was inspired by two things, making them clear in his concept motorcycle. Speed and the alien characters in “Alien.” This speed racing bike is rugged yet sleek. The design is aerodynamic and based on Kawasaki ninjas stats (height, wheel base etc…), so will future road ninjas or aliens be seen riding it? 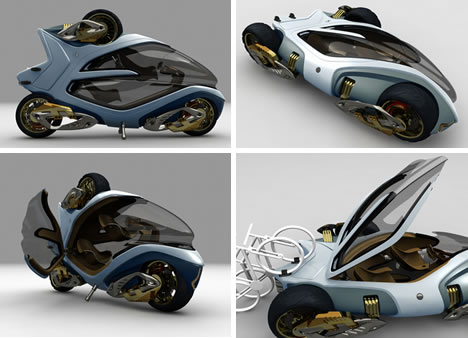 Iranian designer Javad created the Magic Tricycle to drive on all three wheels for normal highway use, but can rotate around a longitudinal axis running from the front to the rear right wheel with the left wheel elevated into the air so the vehicle can be ridden as a motorcycle in more congested areas. To facilitate this, the seats rotate to keep the occupants sitting upright and the airborne wheel opens up blades which work like a helicopter tail propeller to aid stability. 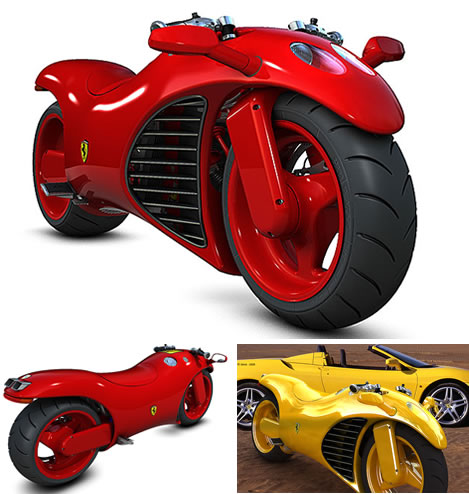 Designer Amir Glinik conceptualized this Ferrari V4 superbike. He created his design around the theoretical application of the Ferrari Enzo’s V12 engine, chopped down to four cylinders and modified to drive in a motorcycle frame. Hopefully this hot puppy will be hitting the highway soon. It’s lean and mean. 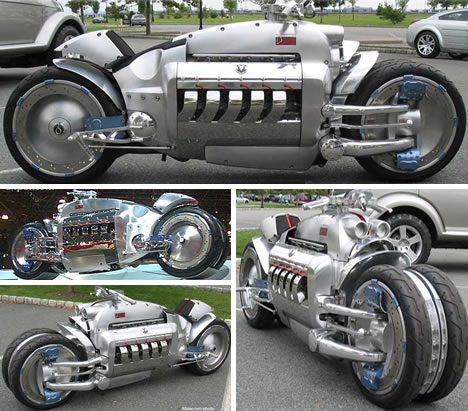 Born to be wild? Get your motor runnin’ and head out on the highway. The Tomahawk is a Viper V-10 based motorcycle, a 500 horsepower engine with four wheels beneath it. It practically breathes fire. Chrysler sold nine replicas through Neiman Marcus for $555,000 each. If the price tag didn’t feel like a punch in your solar plexus, then here’s the evil part: lookin’ for adventure? Well, these motorcycles cannot be driven on public roads.