‘Sculpture by the Sea’ returns to Sydney‘s beautiful Bondi Beach, featuring awesome open-air art exhibits by over 130 artists from 21 countries. 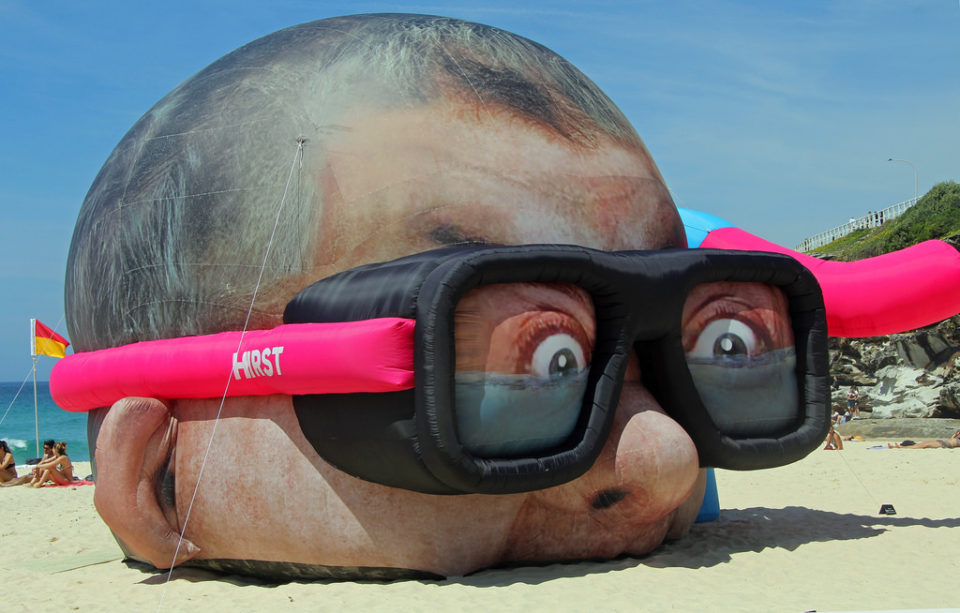 Now celebrating its 22nd year on the brilliant white sands of Bondi Beach, “Sculpture by the Sea” still has the power to bemuse, bewilder and beguile beach-goers Down Under.

It’s not just that some of the exhibits are larger than life. Pieces like “Cool Shit” (above) by notorious and provocative modern artist Damian Hirst are guaranteed to trigger a wide range of emotions that may differ between individuals – even between different viewings.

Art of the Surreal 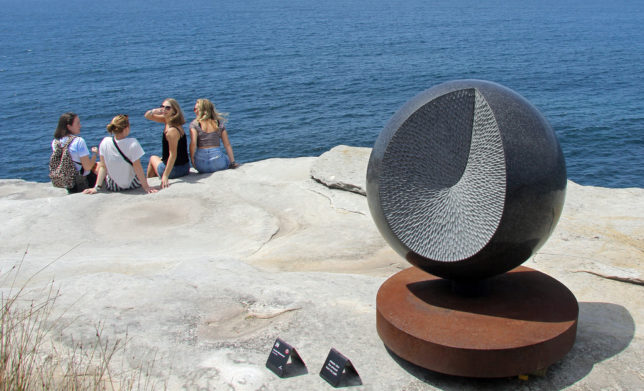 Sculpture by the Sea began as a volunteer initiative in 1997 and over the years has grown to a three-week event drawing large and appreciative crowds to beautiful Bondi Beach. Remaining true to its roots, Sculpture by the Sea is a not-for-profit organization though it does receive just under 20% of its revenue via government funding.

That’s Just How He Rolls 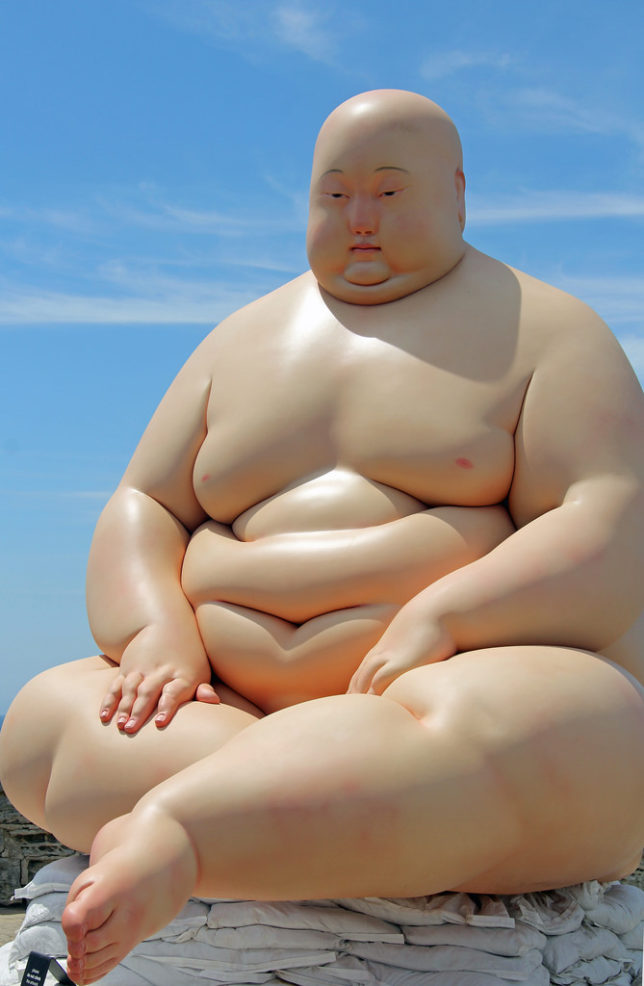 The event’s popularity has surged over its 22-year run and not only visitors are impressed – artists from beyond Australia have taken notice. This year, the roughly 70 participating Australian sculptors have been joined by eight Chinese artists from Beijing’s prestigious Central Academy of Fine Arts. One of the Chinese contingent’s more er, notorious exhibits is “Bank” (above), by Mu Boyan. Does this beach backdrop make me look fat?

Wheel Be Seeing You 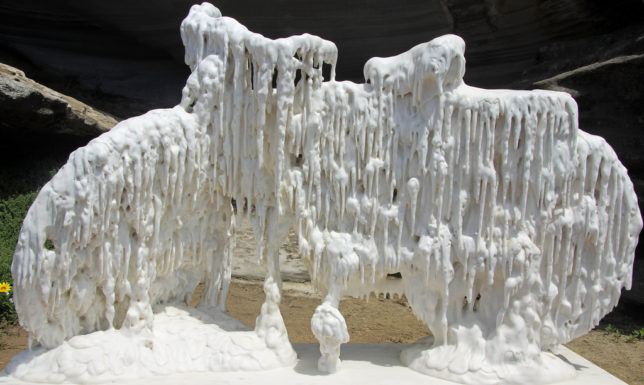 Flickr member Ian Sanderson (iansand) visited Sydney in October of 2018 and came back with a wealth of brilliant photos, and probably a lousy t-shirt to boot. Sanderson’s images of Sculpture by the Sea, posted under an international Creative Commons license, benefit from the famously clear and sunny weather of a typical New South Wales spring. Weather of not, though, artist Cao Hui’s sculpture titled “A Bicycle Covered by Snow” was designed to be cool no matter how hot it got. 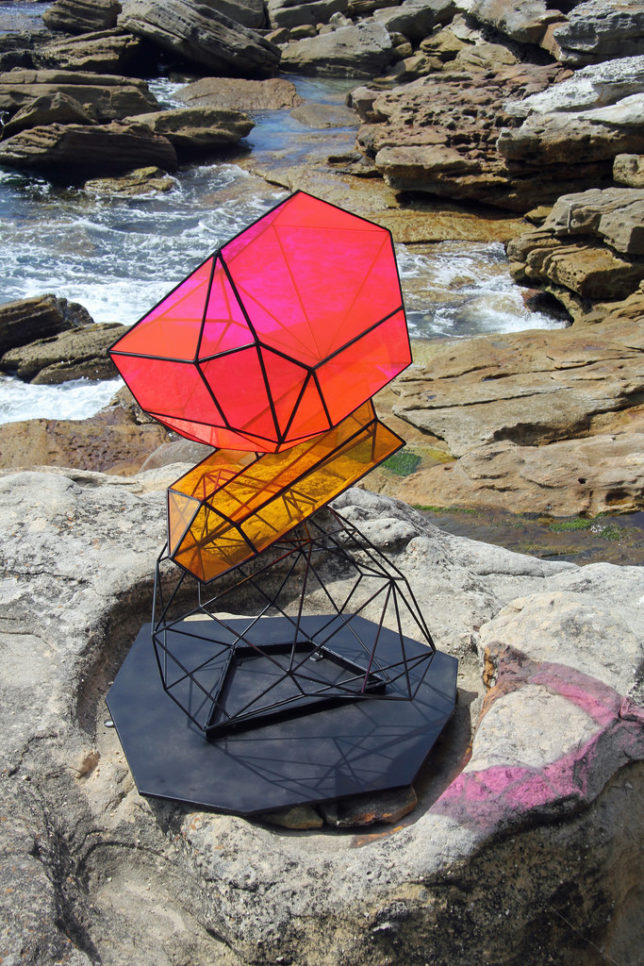 Italian-Australian artist Alessandra Rossi created “Cairn” as an homage to ancient megalithic sites found worldwide which evoke a certain common humanity displayed by our species dating back to prehistoric times. “The abstraction and simplification of form contains the light and colors of the landscape in which it is placed,” explains Rossi, “exposing the hidden and the imaginary, in a balancing act between fragility and impermanence.” 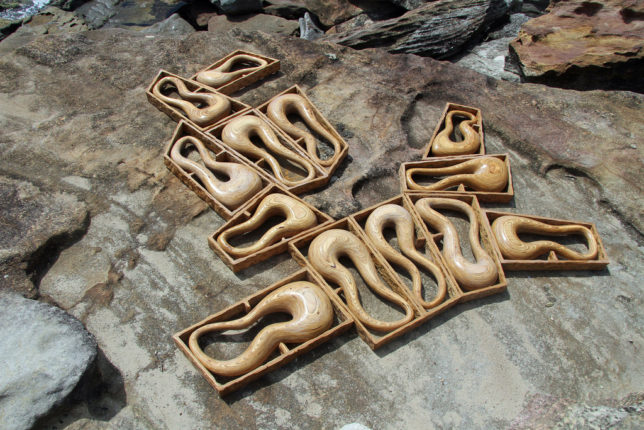 The 2018 edition of Sculpture by the Sea ends today (November 4th) so consider yourself lucky if you’ve been able to enjoy the many sculptures spread along over a mile of Bondi Beach’s exquisite white sand coastline. Besides the artworks themselves, the event featured guided tours, free artist talks, an indoor sculpture exhibition in case of inclement weather, and last but not least a “sculpture conference” at the Sydney Opera House. The somewhat disturbingly organic sculpture above, by the way, is “Layers” by artist Charlie Trivers. 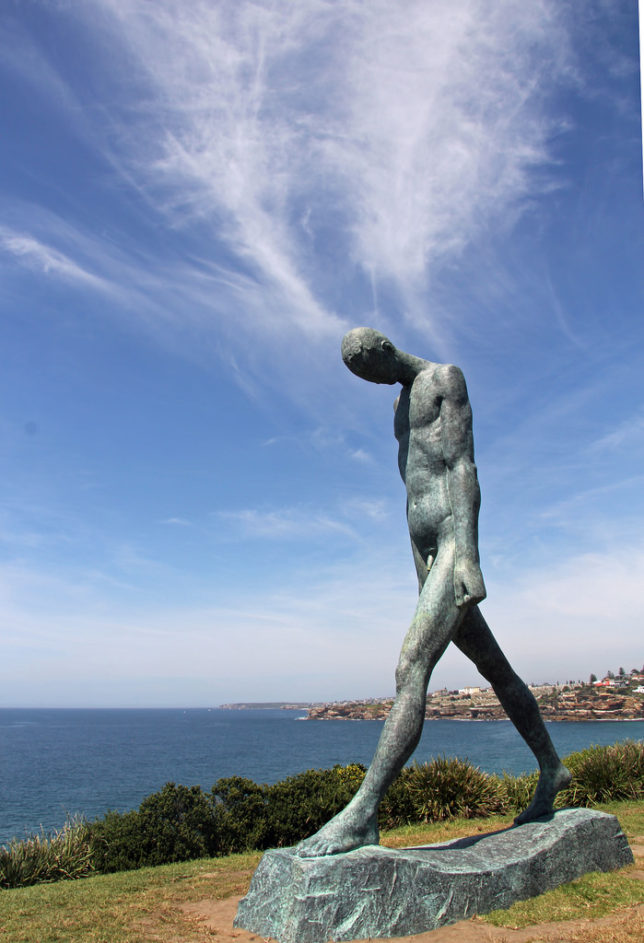 Artists who participate in Sculpture by the Sea do so for a variety of reasons, one being the Aqualand Sculpture Award presented to the “winner” near the end of the event. As art’s appeal varies depending on the beholder, who can really state which artwork is best? Nevertheless, every year one artist walks off with a cash prize of A$70,000 (just over $50,000) while their sculpture is gifted to the Harbour Trust and displayed permanently at George Head in Headland Park. Wei Wang’s “Walking” (above) won’t step up to claim the prize but the artist (and his sculpture) can still stand tall regardless.