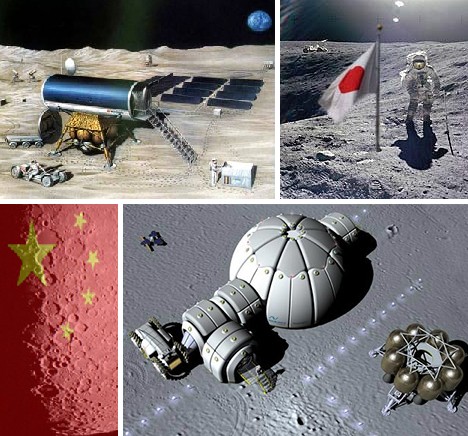 These 10 examples of international, interplanetary space habitats show that colonialism isn’t dead, it’s just lying in wait for the next new frontier – which just may be the wide open real estate far above the clouds. Can I interest you in a condomoonium?

USA: Space Race for the Pole 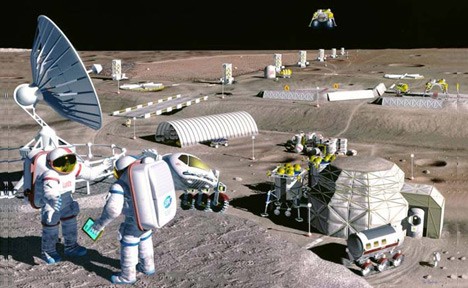 Although the United States has scaled back its spacefaring plans considerably from the heady days of Apollo and Skylab, the general consensus of the country’s astronomical community is that colonization of the moon and planets is inevitable. 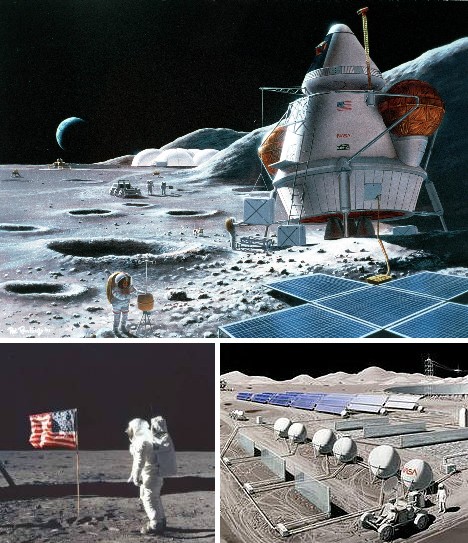 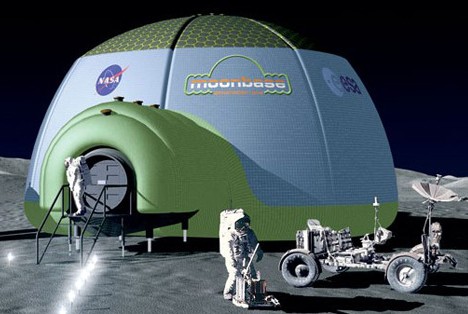 (images via: Space Gizmo, Rhapsody In Books and Space-Post)

Plans are already afoot to establish an American base on the moon, possibly in or near the shadowed Shackleton crater near the moon’s south pole. NASA’s recent LCROSS mission determined that ice exists in the moon’s polar craters into which the sun never shines. Perhaps fittingly, a bill set before Congress mandates that the first American long-term lunar base be named after the first man to walk on the moon, Neil Armstrong!

Russia: The East is Ready 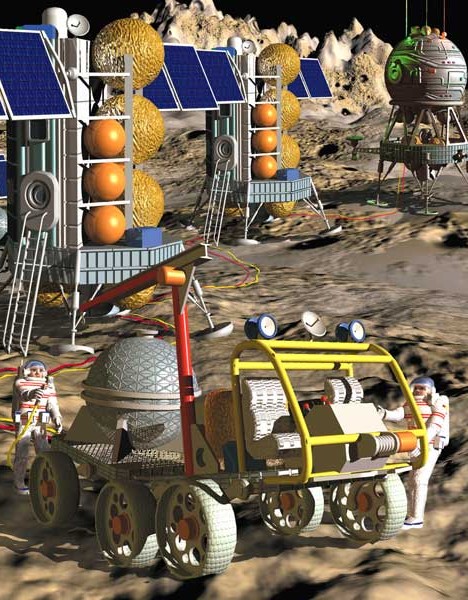 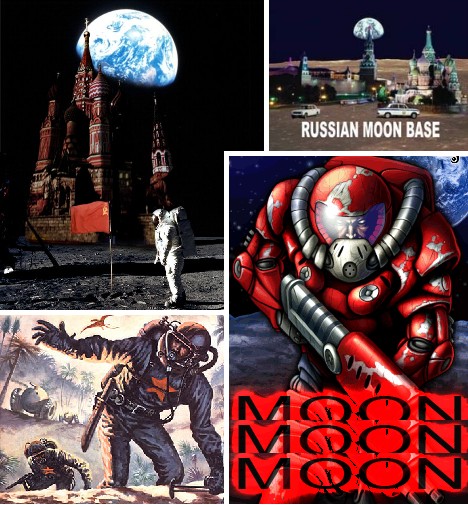 (images via: The Space Review, Freaking News and American Chronicle)

Though the former Soviet Union lost the Space Race to the United States, Russian dreams of space exploration live on and may yet “bear” fruition. Russia inherited much knowledge, equipment and experience from the days of the USSR and they’ve managed to keep their hand in the space game by being the world’s heavy lifter. Many pundits feel it’s only a matter of time before Moscow goes over the moon, not to mention Mars. 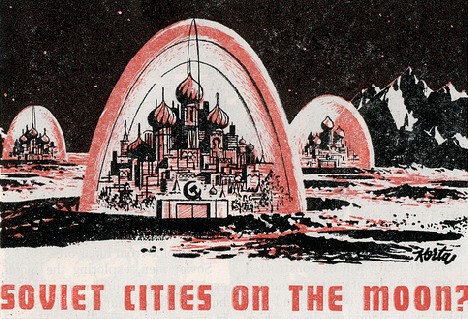 Much scaremongering took place over Soviet space aspirations during the Cold War and fanciful imagery helped put the fear of a Red Planet – ANY planet – into the fevered imagination of the public. 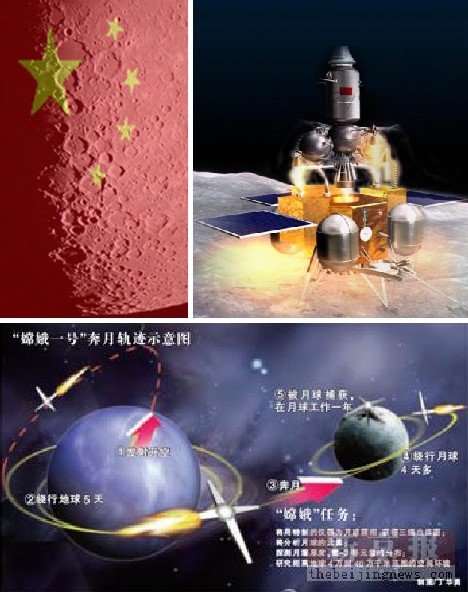 (images via: Mutant Palm and Astronautix)

China has forged into space gradually but steadily, and a moon base is definitely on the Middle Kingdom’s agenda. Plans, though yet unfunded, foresee a series of robotic landings and sample return lunar missions leading up to manned missions to the moon and the construction of a small permanent moonbase by the midpoint of the 21st century. 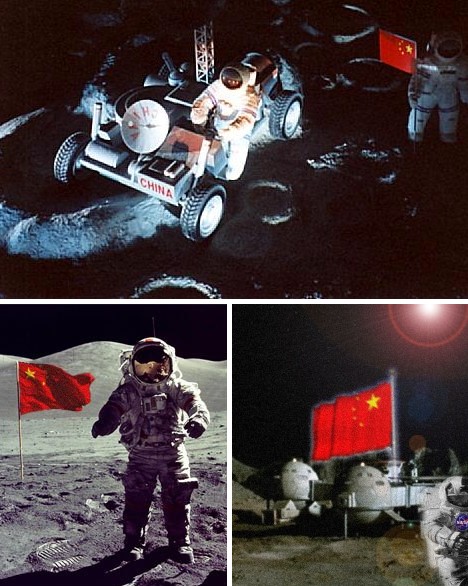 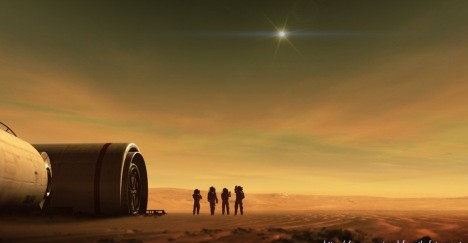 China’s main advantage in megaprojects such as space exploration and the establishment of lunar bases is that, being a non-democratic nation, such projects are not subject to public debate. As well, a permanent moonbase would be a great boost to national prestige, something China’s leaders have always sought as a way to maintain support for their political system. 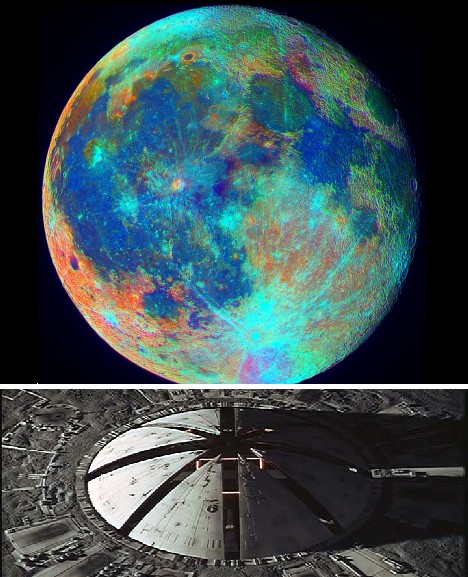 (images via: Lunar Networks and Astrosurf)

India may be flying under the radar compared to China’s spectacular economic liftoff but the world’s largest democracy is by no means being left in the dust when it comes to space exploration and, eventually, the establishment of moon bases. 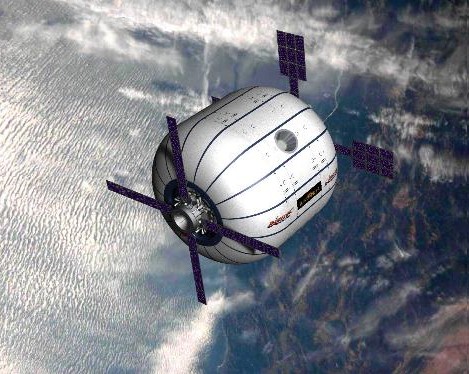 Blessed with an abundance of educated young people and a government led by practical technocrats, India’s space agency (ISRO) has already scored an unqualified success with its Chandrayaan-1 lunar probe. Chandrayaan-1 gave the world the first solid hint that water could be found at the lunar poles. Better – and likely wetter – things are sure to follow.

Japan: Land of the Rising Moon 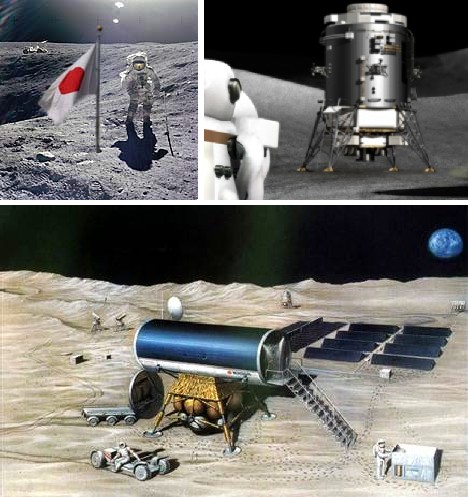 (images via: Moon Daily and MSNBC)

Advanced in robotics and an active participant in the International Space Station with its Kibo science module, Japan has already taken significant steps towards the creation of an ongoing presence on the moon. Startlingly clear video relayed from Japan’s Kaguya orbiting lunar probe illustrated the island nation’s expertise and their space agency, JAXA, has grand plans for the future. 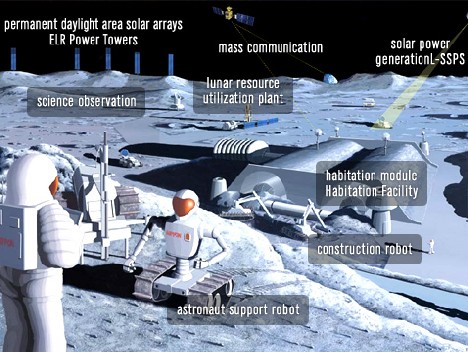 JAXA has set up a Human Lunar Systems Team to get the ball rolling for lunar exploration in the years ahead. As currently stated, JAXA will be following Kaguya up with a robot lunar lander and sometime after that, a manned lander. A scene showing the Rising Sun flag with a rising earth in the background may not be all that far away. 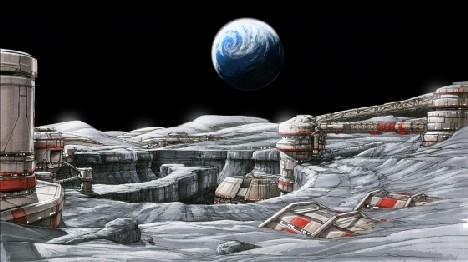 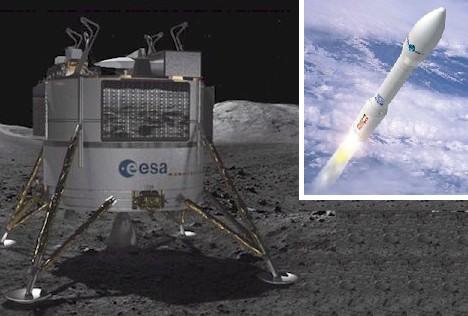 The European Union, through the ESA (European Space Agency) has scored a number of space successes though most have involved missions to Mars and assorted comets. That doesn’t mean the Europeans have been neglecting the Moon; just that the time for a wide-ranging lunar exploration program hasn’t arrived yet. It likely will, though – the Eurozone’s economy is (like the rest of the industrialized world) dependent on abundant raw materials and though they may not be cheap on the Moon, they make up for it in sheer abundance. 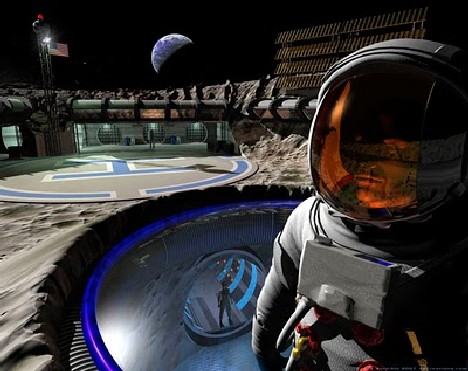 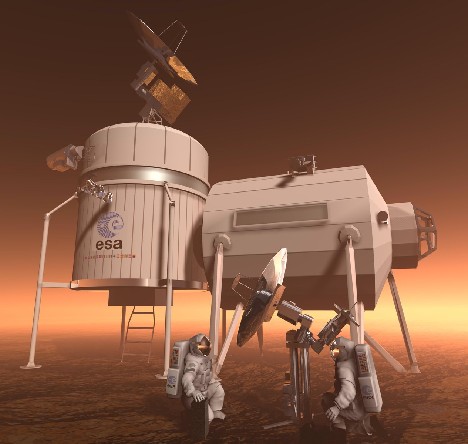 The ESA also hopes to build – literally – on its expertise with robotic missions by someday landing astronauts on Mars and perhaps, the moons of the outer solar system. Europe to Europa, anyone? 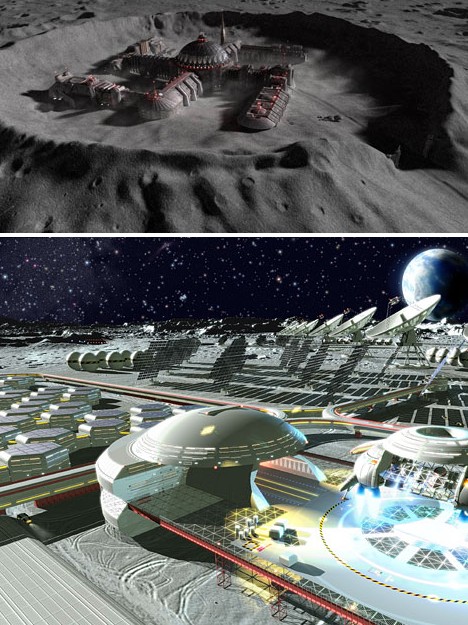 (images via: Starwreck and Kagaya Studio)

According to one of the most bizarre conspiracy theories around, there already IS a moon base and it’s existed for upwards of 65 years. The so-called “secret moon base” on the far side of the moon was established and built by Nazi Germany in the early 1940s and was discovered and photographed by American astronauts aboard Apollo 10 in early 1969. The idea of a Nazi Moon Base has provided fodder for dozens of space artists, conspiracy theorists and sci-fi novelists – and the concept is weird & wacky enough to warrant further exploration (in a future WebUrbanist post).