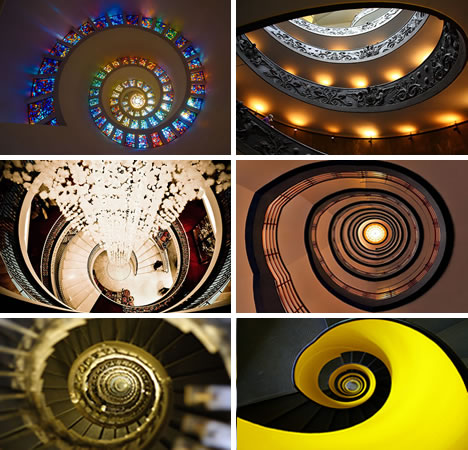 Are stairs dangerous? How about if you twirled round and round and then tried to walk them? How about if you did not whirl but the staircases spun around in dizzying spirals? There is something entirely intriguing about spirals. Spiral shapes can be found in architecture, in nature, in DNA, and even in other galaxies. These 101 sexy spiraling shapes are architectural art. They twist, curling like a spring. This is a celebration of spiraling architectural design, angles versus curves. They may make you smile or they may induce vertigo, but here are some the most impressive, most dizzying, spiraling staircases from around the world. 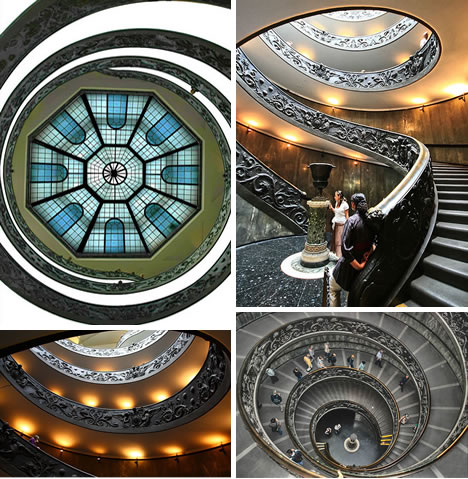 In Rome, inside Vatican City, the Vatican Museums are some of the greatest on the globe. The above spiral staircase inside one of those museums is the most recognizable spiral stairway in the world. In the late ‘20s, Pope Pius XI commissioned the monumental project and entrusted the sculptor Maraini with the creation of the model. Marinelli Foundry cast it in bronze. Pope John Paul II later commissioned the Marinelli Foundry for the 340 meters of bronze handrail. 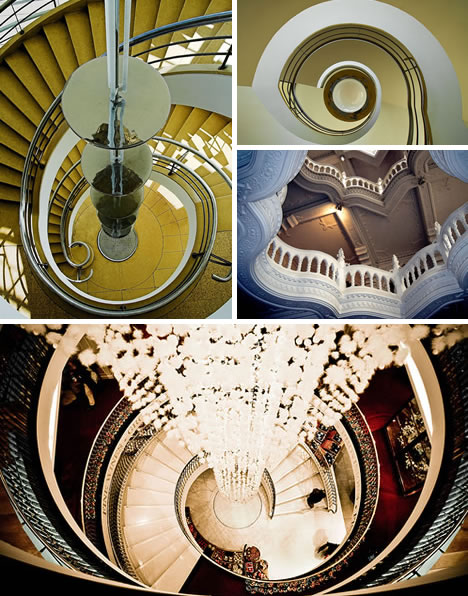 The top two images are of the spiral staircase built in 1935 at De La Warr Pavilion in Bexhill on Sea, located on the south coast of England. Ceilings and balconies have also been inspired by the same circular design, like on the middle right, in a Budapest, Hungary museum. On the bottom is the spiral staircase at Piccadilly Circus in London. Enjoy this virtual trip and these architecturally artistic flights without needing to climb a step. 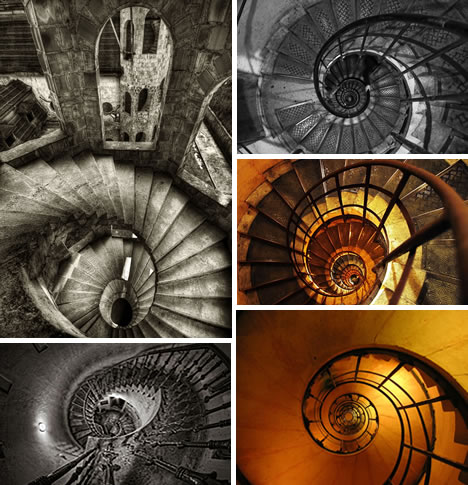 These might make you dizzy as you ascend and descend, twisting and turning, spinning and whirling. Spiral staircases were first popular in castles like the castle in Chmielno, Poland, on the top left. Spiral stairs constructed during medieval times were usually made of stone and tended to wind in a clockwise direction. The three pictures on the right are of the Arc de Triomphe, a monument in Paris. There are 284 spiraling steps to reach the top of the Arc. The middle photo is looking down the round shell, while the bottom photo is looking up. On the bottom left, the spiraling staircase is from a castle in Poland near Kopiec Kosciuszko. 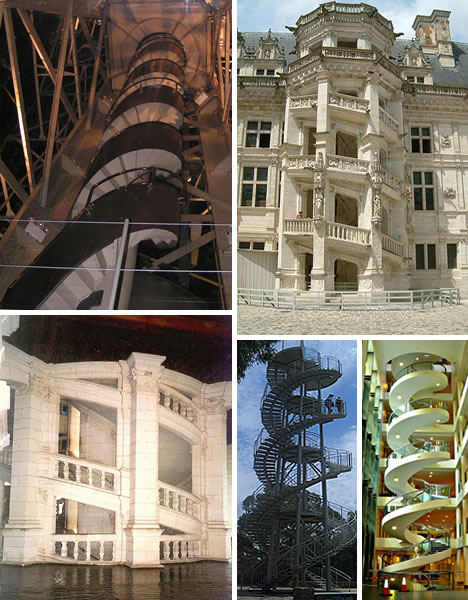 Helical stairs have a handrail on both sides, but no central pole like true spiral stairways do. Here are some helix / double helix staircases. The top left is in the interior of the Statue of Liberty. Both the top right photo of Royal Château de Blois and
the Château de Chambord on the bottom left are located in France. There are double helix DNA outdoor stairs and yet another springy spiral shape at the Garvan Institute in Sydney.

From Sagrada To Vizcaya 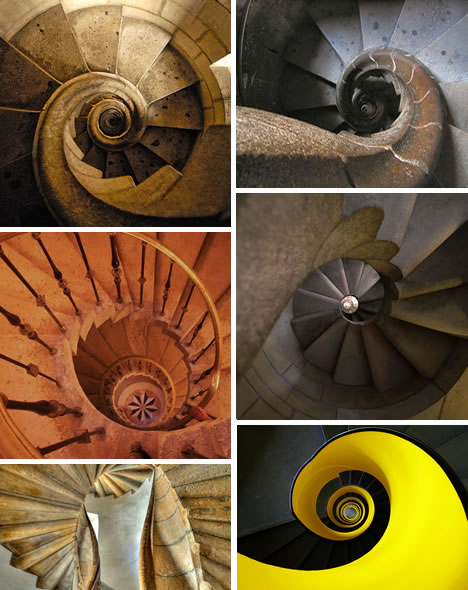 The top two and also middle right photos are of Gaudi’s Sagrada Familia. The Sagrada Familia is a massive, privately-funded, Roman Catholic Church in Barcelona, Spain. It was designed by Antoni Gaudí who started worked on it in 1883. There was a previous architect in 1882, but Gaudí redesigned the The Sagrada Familia. It will have 18 towers and is not expected to be complete until at least 2026. The spiral on the middle left can be found in Miama at the Vizcaya Museum. Construction started on the bottom left staircases in 1499. It is the twin spiral staircase inside the “Burg” in Graz, Austria. The bright yellow staircase is looking up to down in La Praille, Genève. 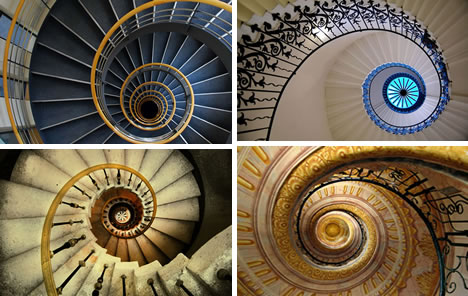 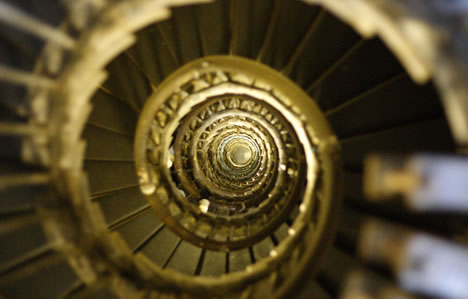 You could spin round and round and probably not get any more dizzy than if you leaned over the railing to snap a shot of these gorgeous spiraling staircases. The top right photo is of The Tulip Stairs, inside the Queen’s House, Greenwich Park in London. It was the first centrally unsupported spiral stairs constructed in England. On the middle left is a view looking up the spiral staircase that leads from the upper floor of the Stift to the Cathedral. It is located in Melk, Austria. On the bottom is a great shot looking down at The Monument to the Great Fire of London. 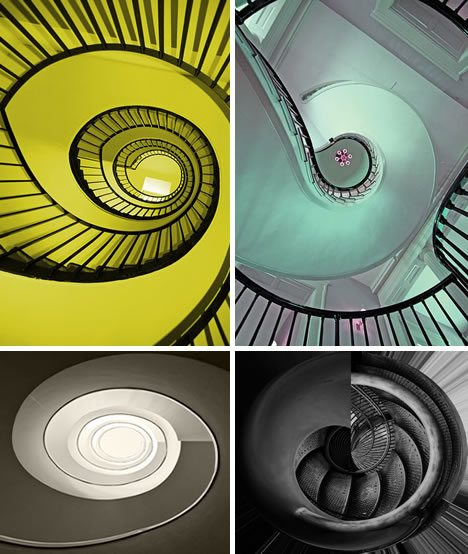 Staring at all the spirals can be a bit hypnotic. The yellow spiraling staircase in Austria was taken at the bottom looking up. The green staircase was titled Spirograph. On the bottom left is Vertigo, taken in Padova, Veneto, Italy. At the bottom right is the spiral staircase at the National Museum of Scotland in Edinburgh.

Spiral Up, Spiral Down 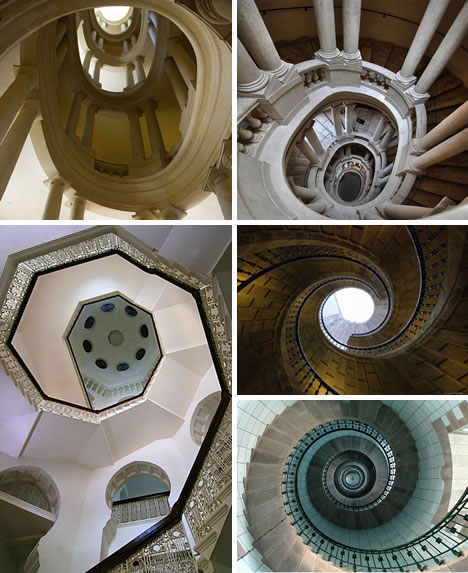 Palazzo Barberini is a palace in Rome. It was built in 1549 and the top two photos are of an oval staircase by Borromini. The ornate spiral staircase on the bottom left can be seen in Malaysia at Kuala Lumpur Railway Station. The middle right photo was snapped inside the Museum do Pobo Galego in Spain. On the bottom right is the Lighthouse Island Virgin in France, Phare de L’Ile Vierge. Both spiral and helical stairs are classified by the number of turns that are made. Most very tall, multi-turn spiral staircases are found in lighthouses, castles, and old churches. 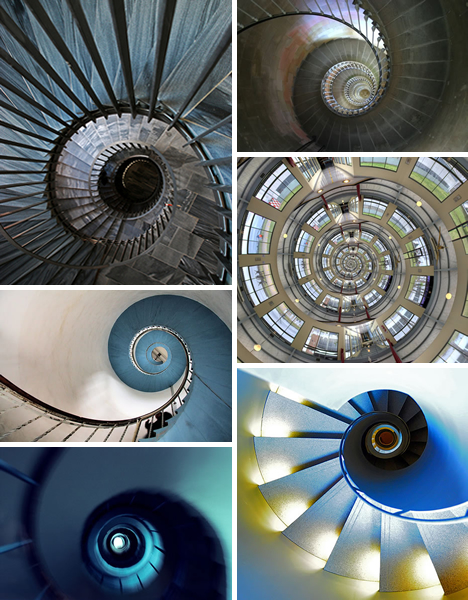 People who photograph spiral staircases seem to be in good shape as there are hundreds of stairs to climb to the top for the pictures looking down. On the top right, the old spiral staircase was photographed on the Ile de Ré off the west coast of France. On the middle right is a spiral hallway in the Navel Aviation Museum in Castelar, Buenos Aires. The middle left photo is of the Northern Lyngvig Lighthouse in Denmark. At the bottom left is the view looking up the Lednicky-Vltava Minaret in the Czech Republic. 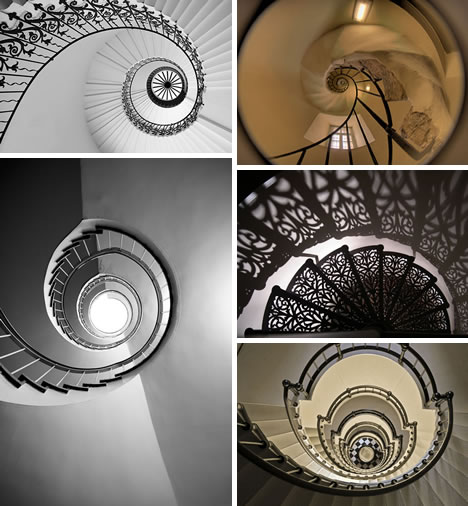 The narrow twists as you climb up or down can leave you intrigued to see what greets you at the top or bottom. Something wonderful or something ominous? Dizzying spiral staircases can be found all around the world and are architecturally superb. The top right is entitled Stairway Near to Heaven while the bottom left was taken at Rathaus-Glockenspiel in Munich. The middle right spiral staircase was photographed on the climb up to a flat in London. The bottom right was snapped at the top of a lighthouse, looking down. 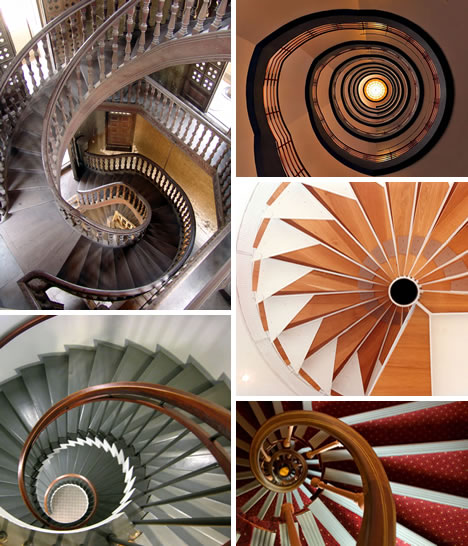 Built in 1907 and in need of repair, the spiral staircase on the upper left is located at the Baron’s Palace, in Heliopolis, Egypt. This house is also supposed to have secret tunnels. At the middle right is the view looking up at a spiral staircase in the Architect Gunter Behnisch’s Museum für Kommunikation in Frankfurt, Germany. The bottom left leads to a restroom in Helsinki-Vantaa Airport, Finland, while the bottom right is the view from a Paris hotel. 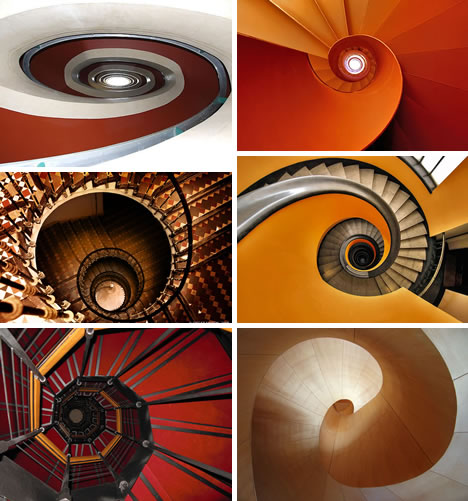 From Fleet Street in London, looking up, like in the upper left, to the swirling orange design to its right, spiral staircases apparently come in all colors and flavors. The middle left was taken in Alicante, Spain, while the spiral staircase on the middle right was not tagged with anything more than Orange Vertigo. On the bottom left, this spiral staircase at the Palazzo Rosso in Genoa was restored by architect and museum curator Franco Albini. The bottom right stairway shows art again meeting architecture at Frank Gehry’s Art Gallery of Ontario. 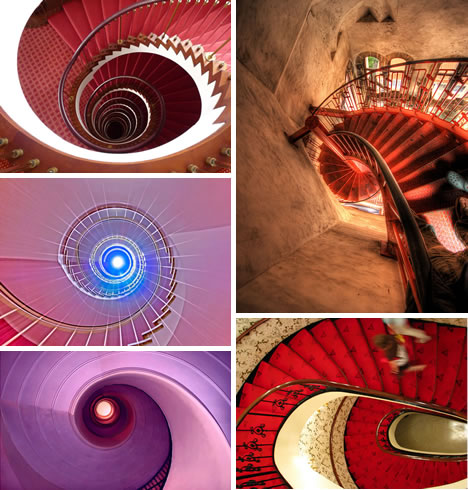 The top left photo was taken at the Hotel Botanico in Tenerife, Spain. The top right was taken looking down a belltower in Zadar, Croatia. On the middle left is a hypnotic view looking up and captured at the Café Glockenspiel in Munich, Germany. At the bottom left is one of the many spiral staircases in Rome. The red carpeted spiral staircase is located in Heniz Hall that houses the Pittsburgh Symphony Orchestra. 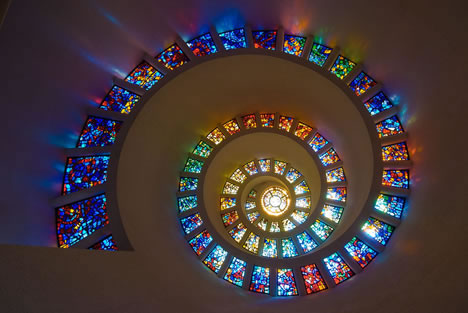 This magnificent masterpiece is not a stairway, but a stained glass ceiling inside the Thanksgiving Chapel in Dallas. It spirals upward to 58 feet. It’s called the Glory Window. It was designed by Gabriel Loire of Chartres, France. 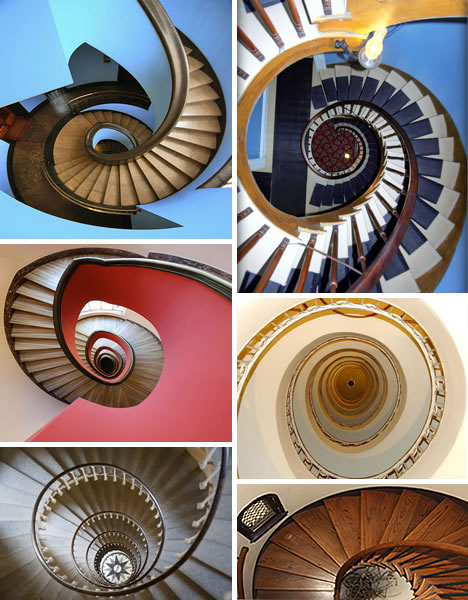 The spiral staircases at the top and middle left were photographed in Rome. On the top right, this staircase was built in 1854 for an octagonal house in Wisconsin. The middle right spiral is looking down from a stairway in Madrid. At the bottom left is a spiral staircase constructed in 1854. That must have been a good year for spiral design. On the bottom right is a restored staircase for Casa Feliz Historic Home Museum in Winter Park, Florida. 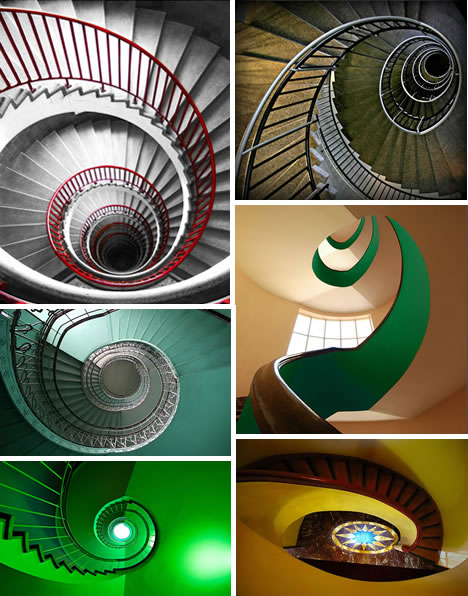 The red and white swirl was built in 1930 and is located within a skyscraper in Ljubljana, Slovenia. The photo at the upper right was taken within a hotel in Helsinki, Finland. On the middle left is the Emerald Spiral. It is located in Prague close to one of the “most dangerous” streets in Warsaw, Poland. Visitors are advised: “huge zoom lenses and video cameras will attract unwanted attention, quite possibly worse.” The top right is called The Green Snake. The bottom green spiral staircase was snapped in Munich. The bottom right photo is from the first floor looking up, somewhere in Rome. 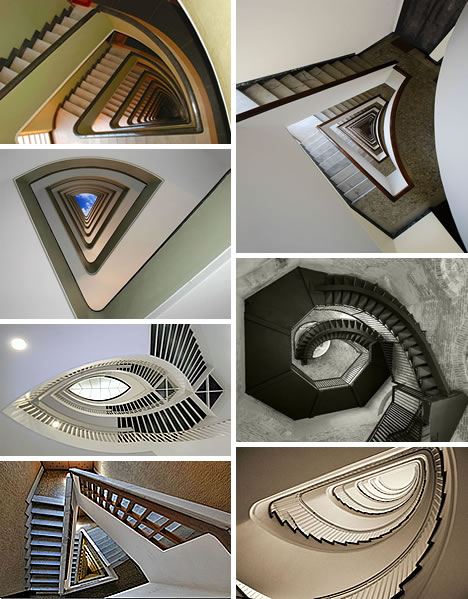 On the middle left is a dynamic artistic feature at the Museum of Contemporary Art in Chicago. The black and white photo is of a spiral staircase in Italy. The bottom right picture was captured in Münster, Germany. Otherwise, look up or down and open your mind to the possibility that Rome has hundreds of fascinating spiral staircases. It was where the rest of these were photographed. 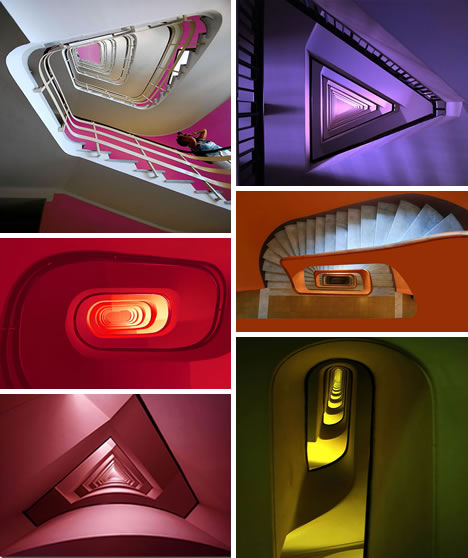 All of these colorful and architecturally enchanting stairways can be found in Rome. There is a group of photographers who belong to the “Spiral staircases and staircases project in Rome.” They walk around with their friends and capture these vivid beauties and their perception of reality for the rest of us to enjoy. 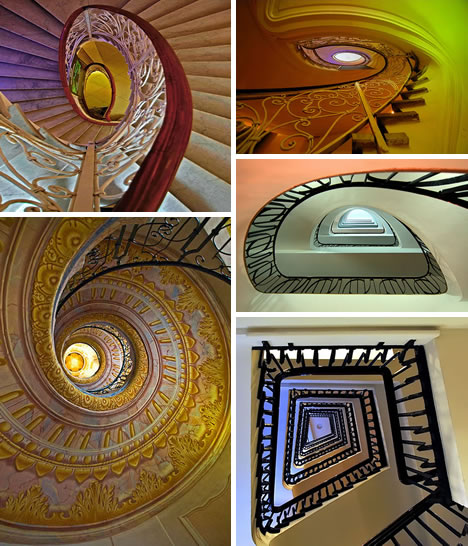 Mel’s Bookstore in Rome features this impressive elliptical spiral staircase in the top two photos. The beautiful spiral staircase on the lower left can be found in the Austrian Benedictine Abbey in Melk. But the dizzy feeling continues in the snail house design, spiraling up on the middle right. Dizzy yet? Going up or going down, can you tell which end is up in the lower right photo? 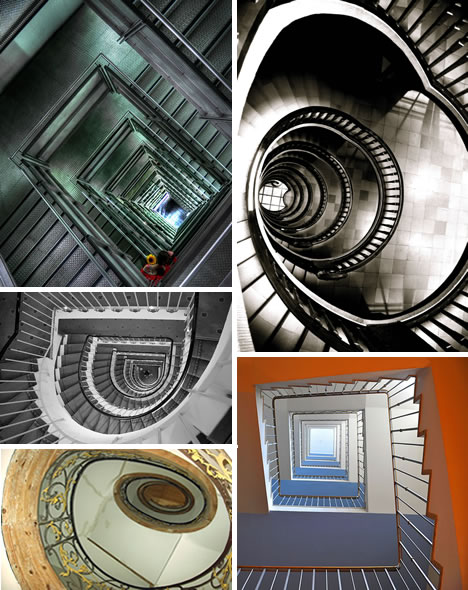 So whether in England at Gateshead Quays like at the top left, or in Hamburg, Germany like at the top right, try to enjoy the angles versus curves in stairways and stairwells. Does the shape really need to be round to feel the vortex of spiral motion? Spiral out of control with the dizzying sensations as you peek over the edge and look down. Peer up in wonder at the architectural art to be found in stairways. Or you can come back and look here again if you do not wish to undertake climbing the thousands of steps that you can virtually take in. But if you ascend and descend, twisting and turning, spinning and whirling, it will be worth it to see in person some of the world’s best spiral staircases. Keep your chin up and keep an eye out for spirals that are all around us.