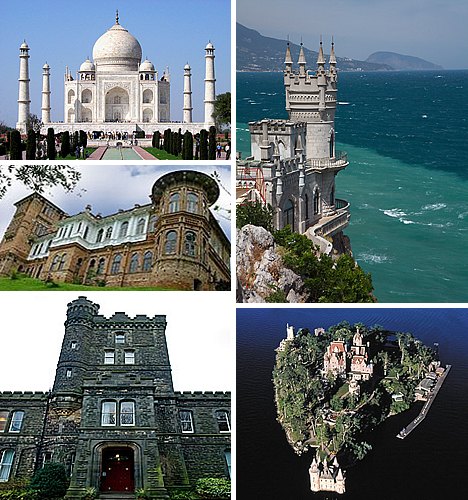 Architecture is influenced by Eros, Greek god of sexual love and beauty, also known as Roman counterpart Cupid. Architecture can be beautiful and a thing to love. But there are some castles built specifically for love as loving tributes, gifts, or even erected for love lost. Nothing is more powerful than love and expressing love in architecture is divinely romantic. However, love and tragedy are reoccurring themes to these castles. For Valentine’s Day, here are 10 castles built for love. 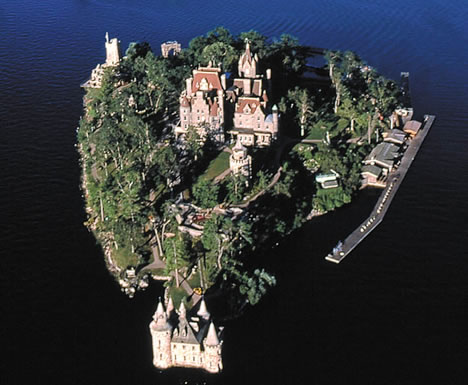 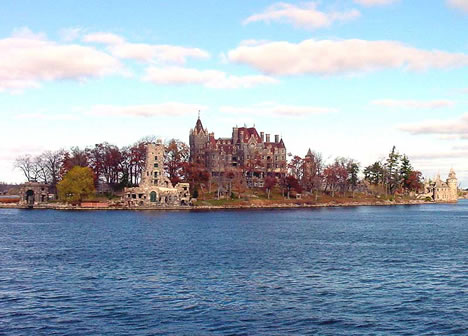 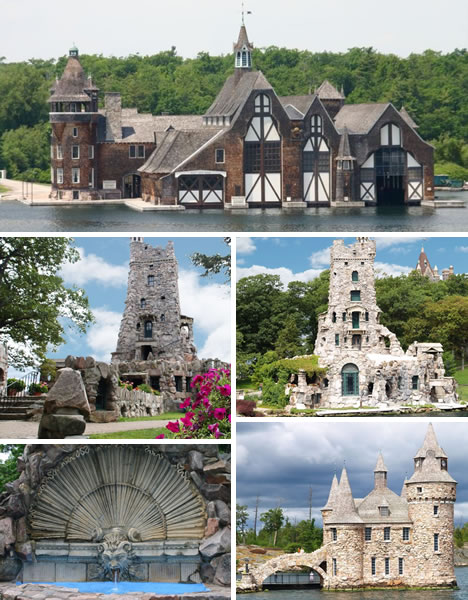 Valentine’s Day 1905 was to be the day that George Boldt gave his wife the five-acre Boldt Castle estate in the Thousand Islands. He had this medieval and Victorian architectural styled castle built as a testimonial of his love for his wife, Louise. Boldt Castle was to be an eleven-building complex, the most grand in the Thousand Islands. Among many amazing architectural landmarks, there was the Yacht House, a gigantic playhouse Alster Tower, the Power House, and a fairytale version 120-room home modeled after a Rhineland Castle. One year before Boldt Castle was to be completed, Louise, aged 41, died. Brokenhearted, George Boldt stopped the construction and never returned to the island. After more tragedy of vandals set free on the island, there is a bit of a happy ending. Drawn by the romance of the place, now couples come to be wed at Boldt Castle. 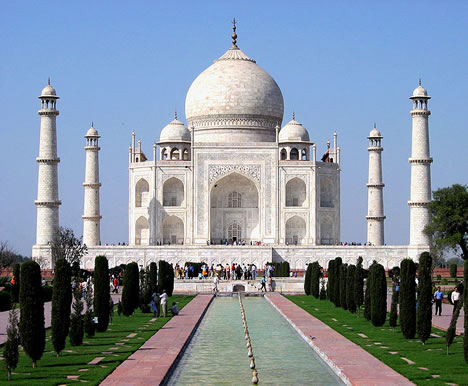 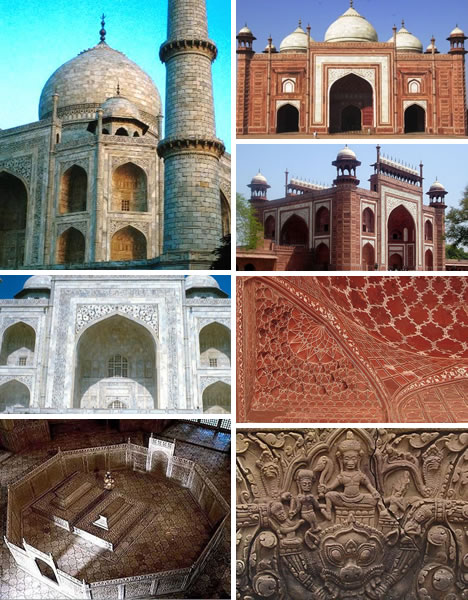 The Taj Mahal was built for love, but tragically as a mausoleum and in memory of love lost. After the death of his favorite wife, Mumtaz Mahal, Emperor Shah Jahan began building a tomb that would be the most resplendent monument ever built by man for a woman. While the dome of the mausoleum and its four standing minarets are built out of white marble, all the outlying buildings within the Taj Mahal complex are primarily built out of red sandstone, combining Persian, Indian, and Islamic architectural styles. The central focus of the complex is the tomb and you can tour it virtually here. 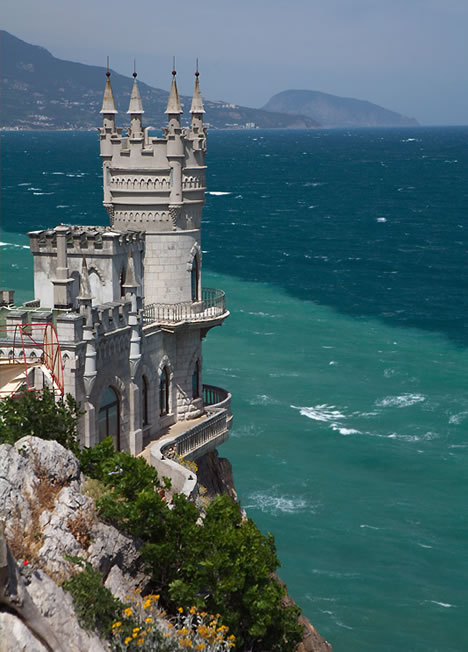 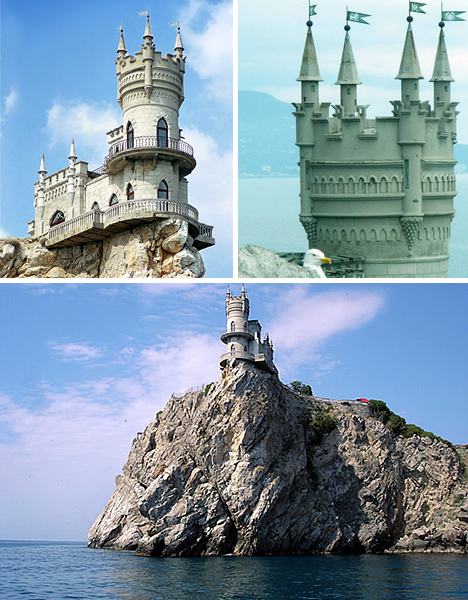 Built in 1912 near Yalta in the South of Crimea, the Swallow’s Nest is one of the most romantic castles of Neo-Gothic style. The Swallow’s Nest Castle was originally named “The Castle of Love.” However, the romantically named “Love Castle” started with humble beginnings as a wooden cottage. There is little proof that this “Castle of Love” was built for a great love . . . more like a lover’s nest. Perhaps not constructed for true love but built for the purpose of making love. In 1927, an earthquake measuring 6-7 on the Richter scale, cracked the 130 ft Aurora Cliff. The huge crack closed the castle for the next 40 years. The cliff and castle have since been fortified and restored. The public flocks to Swallow’s Nest Castle to look over Ai–Todor Cape, the Black Sea, and to dine in the restaurant now within the castle’s walls.
. 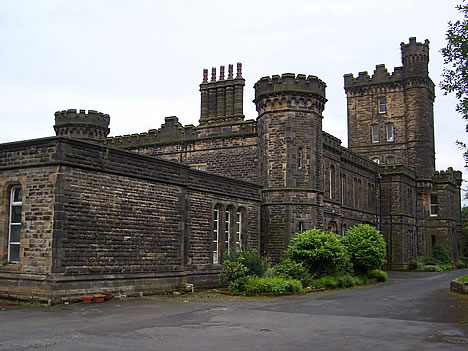 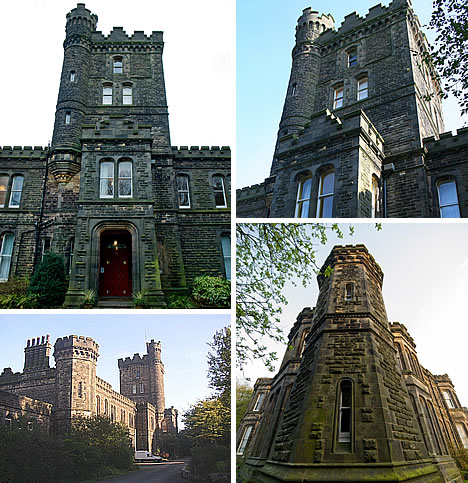 Dobroyd Castle at Todmorden started as a promise of love and turned into a honeymoon home. John Fielden, the son of a wealthy industrialist, fell in love with a local weaver girl, Ruth Stansfield. Fielden proposed to her, but she said she would marry him if he would promise to build her a castle on a hill. When completed, Dobroyd Castle had 66 luxurious rooms, a stable for 17 horses, boasted four small turrets and a main tower. The initials of John and Ruth were engraved in a dozen places, the monograms JFR carved into the Devon marble and Caen stone, as a testimony to their love. However, in a social climb to “immortalise the name of Fielden,” John sent his wife to finishing school in Switzerland to improve her education and learn social etiquette. Distance apart did not make the heart grow fonder, alienating the couple. When she died, he remarried. But John was crippled after being kicked by a horse and spent the rest of his life in a wheelchair. Love and tragedy. 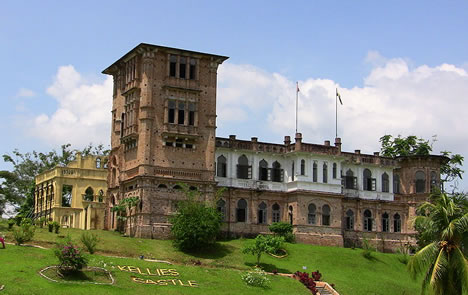 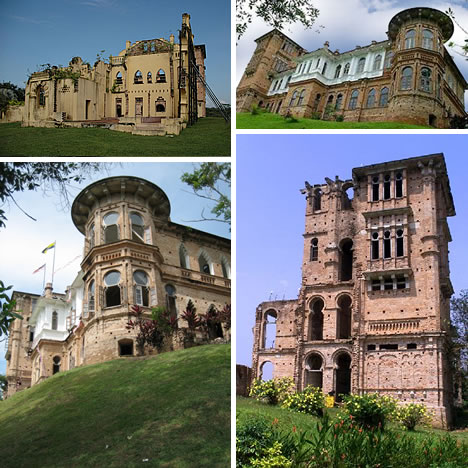 Kellie’s Castle is Malaysia’s oldest castle and built for love by Scottish planter William Kellie Smith for his wife Agnes Smith. She missed home tremendously and had also blessed him with a son. Construction began in 1915, combining three architectural styles – Greco-Roman, Moorish, and Indian. A Spanish flu epidemic killed most of the 70 Indian construction workers. Kellie Smith built a Hindu temple near the castle to please the Indians and to restart construction. Kellie Smith left for England to fetch a lift for the castle tower, but he died shortly thereafter from pneumonia. Construction on the castle built for love was left uncompleted. The castle ruins are rumored to be haunted. 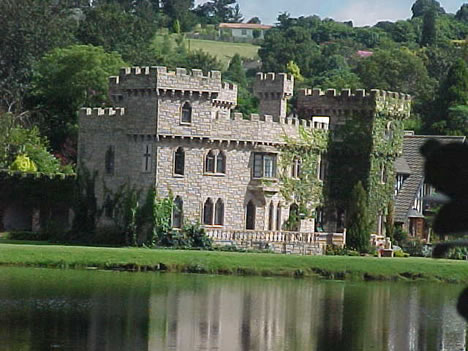 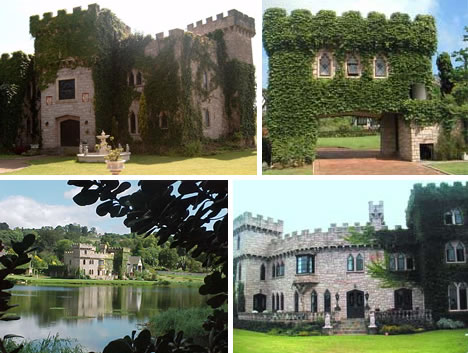 Stratford Castle in Durban, South Africa, now is placed within Camelot Residential and Golf Estate, but it too started off as a kiss of inspiration from true love. The Castle’s cornerstone on the North wing is engraved with Sir Walter Raleigh’s immortal words: “But true love is a durable fire, In the mind ever burning; Never sick, never old, never dead; From itself never turning.” The castle was built upon the spirit of those lovely words. Do you wish you could build a castle for your true love? How about buy one? Stratford Castle is for sale to the tune of $365,000,000 and equipped with, among many things, a golf course within Camelot (and neighbors). 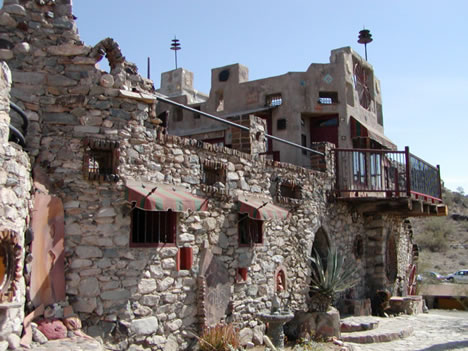 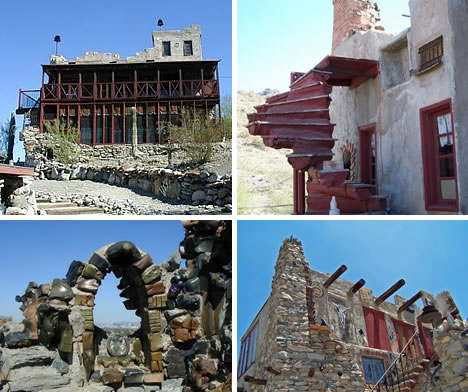 Mystery Castle is a castle built for a princess. Sounds like a magical love story, but it started on a sad note of despair. Boyce Gulley left from his home in Seattle, sick at heart after being diagnosis with tuberculosis. He slipped away from his wife and daughter, who he did not want to watch him die, and began one of the most beautiful yet odd love stories every recorded. With his last few pennies, he purchased a mining claim of 80 acres in the foothills of South Mountain. He then spent the next 16 years building a castle by hand while waiting to die. He used natural materials and old abandoned artifacts. With the memories of his daughter when the two of them built sand castles on the Pacific beaches, memories of the times when she cried as the tide washed them back into the sea, he built the Castle Made From Love. His Mystery Castle would never wash away and she would have it forever. After Boyce died, his daughter, Mary Lou Gulley, discovered her inheritance and received the love offering of Mystery Castle. 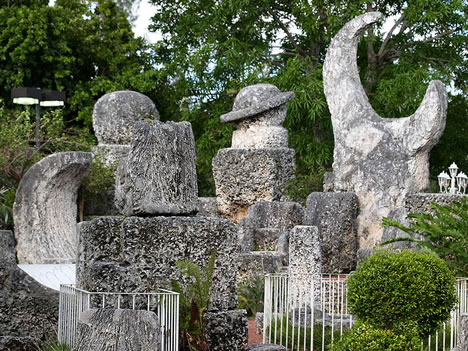 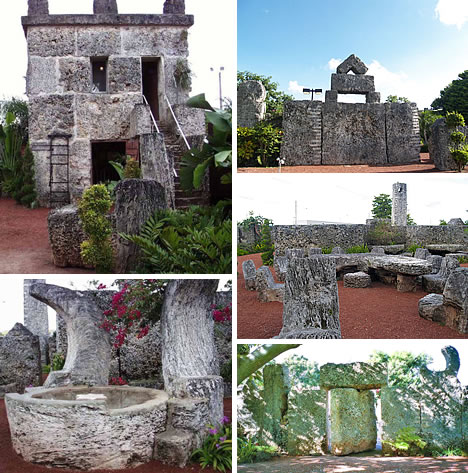 In the early 1920’s, a man named Ed Leedskalnin was left by his fiancé the day before their wedding. Heartbroken, yet intending to leave the mark his undying love, Leedskalnin worked for 28 years on his tribute to his lost love. Working only at night, managing to move tons of stone, he built his lost beloved “Sweet Sixteen” an intricate and stunning castle made of coral. Mystery surrounds Coral Castle, starting at the gate which is a piece of nine ton coral. Leedskalnin claimed to know the secrets of the great pyramids. Yet neither his knowledge nor his devotion to his lost love brought her back to him. It has, however, brought untold thousands of visitors to Coral Castle. 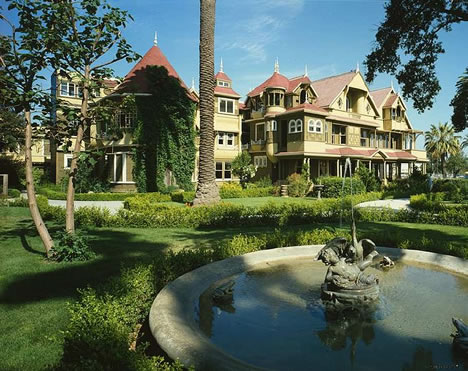 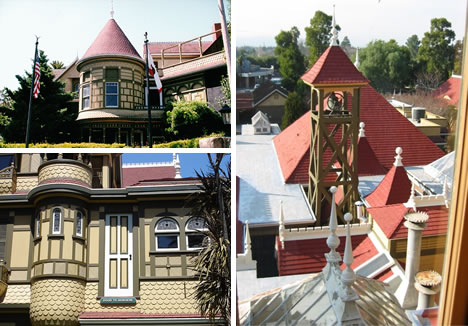 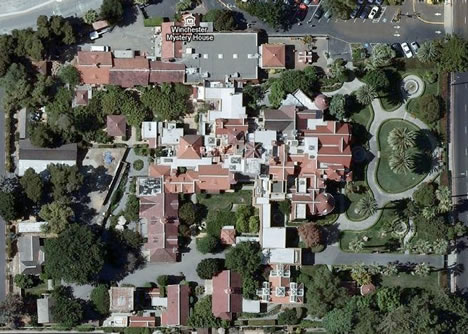 This California “Castle” is a story of love and of tragedy, built less in an effort to remember her beloved husband and more for the love of her own life. Sarah Winchester, the widow of gun magnate William Winchester, believed that her life was endangered and that she was haunted by the ghosts of those killed by Winchester rifles. Her master building plan was only to keep continuous construction so she would be safe and perhaps live forever, or for as long as the house was being built. Her “castle” was an architectural reflection of her psyche, built for 38 years without ceasing, into a maze-like mansion “full of twists, turns, and dead ends, so that the spirits would get lost and never be able to find her.” There are about 160 rooms, 47 fireplaces, 10,000 window panes, two basements and three elevators. Before the 1906 earthquake, the house had been seven stories tall, but is now only four stories. The Winchester Mystery House is allegedly haunted yet open for tourists. Love comes in all shapes, sizes, and colors as does tragedy. 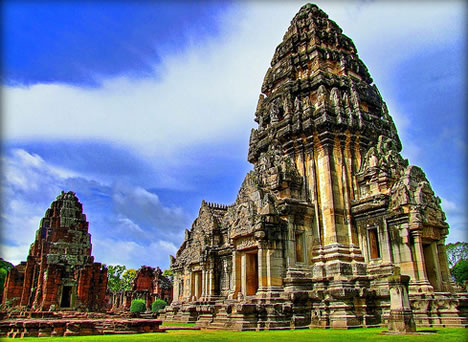 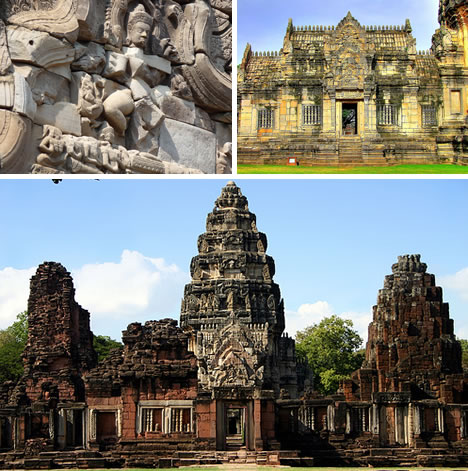 The Legend of Pajitt and Orapima begins with a prince named Pajitt. The king wanted his son to take a wife, so Prince Pajitt traveled the countryside for months until he spotted a pregnant light-skinned woman. He considered her his soulmate, but he could not marry a widow. Instead, Pajitt planned to marry the unborn child when she, Orapima, reached the age of 16. As she grew, they fell wildly in love. Before he could marry Orapima, he returned to the King for the wedding payment to her mother. Orapima was kidnapped, but Pajitt rescued her. While they rested in the forest, a woodsman killed Pajitt with an axe and stole Orapima. She killed the woodsman and returned to Phimai where she built a sanctuary, Prasat Hin Phimai. Heartbroken, she prayed for her true love and the reincaration of Pajitt’s spirit. Prasat Hin Phimai was built, painted, and sculpted on the inside with scenes from her life with Pajitt. One day, a young man saw her handiwork and was brought before her. She recogonized Pajitt’s spirit and they lived happily ever after. Today, in the small town of Phimai, lies one Thailand’s most extensively restored Khmer temple complexes as seen above . . . the sanctuary and “castle of love” Orapima had constructed as she waited on her beloved Pajitt’s reincarnation.