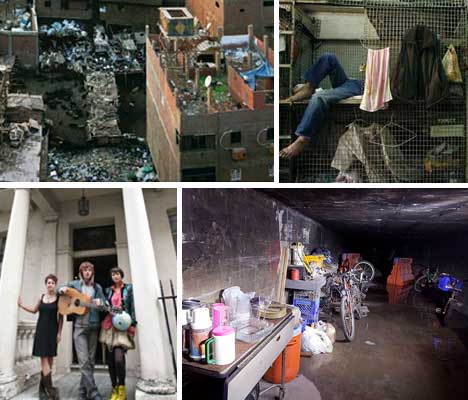 The term “off the grid” has been proudly used for many years by those who choose to produce their own electricity or live without electricity. But there’s a whole other perspective to living off the grid: those who do it out of necessity. The majority of these can be defined as squatters: people living in an otherwise unoccupied place without a legal right to be there. An estimated one billion people are defined as squatters – that’s about one out of every seven people on the planet. Squatting has been depicted in movies and television shows as a practice of the poor, the drug-addled and the otherwise disaffected, but there are layers upon layers in this segment of the population, and some of them are full of surprises.

Squatting as a Political Protest 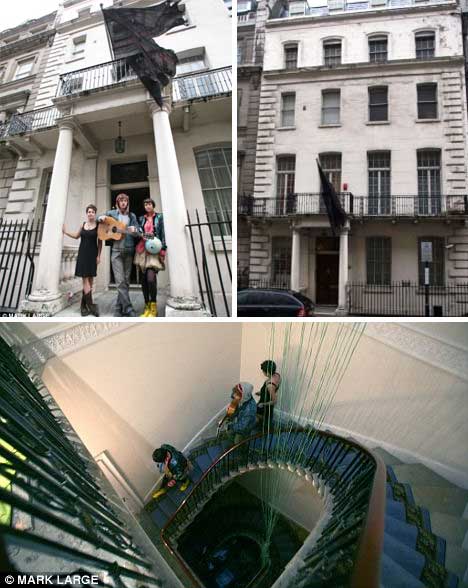 With millions of families waiting for public housing in Britain, it seems a shame to see so many residences sitting empty. At least that’s what a group of artists calling themselves the Da! Collective said when they moved into this 30-room, £6.25 million Mayfair mansion in October 2008. The home, originally built in the 1730s and now owned by the billionaire Duke of Westminster, has been abandoned for quite some time, and the interior is in a state of disrepair. The group of squatters, mostly young middle-class people, decided to move into the home to give it new life. They gained access through an open front window and set up residence inside, decorating the 30-some rooms with art projects and sacking out in sleeping bags. They also changed the locks and had the electric service reconnected. In Britain, squatting is not a criminal matter and the building’s owner has to file an eviction notice to remove any unauthorized occupants. The collective was ordered to leave the Mayfair mansion just two months after taking up residence, but that hasn’t stopped them from staking out new abandoned homes to squat in. 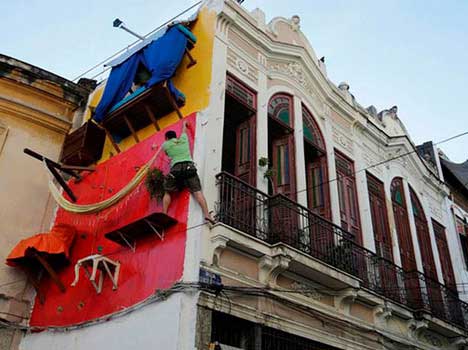 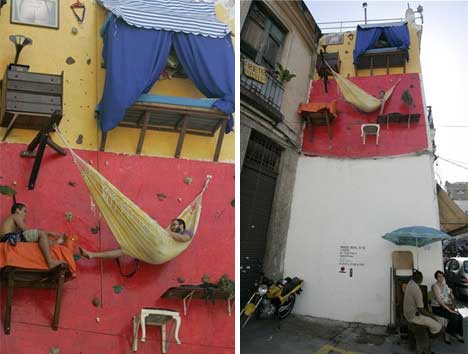 As with the London squatters, these brothers are occupying an otherwise unused space not out of necessity, but to make a statement. Tiago and Gabrial Primo climbed 33 feet up the side of a Rio de Janeiro building (with safety harnesses firmly in place) and spent 12 hours a day for several months hanging out in their hammock, lounging in their loveseat or snoozing in their bed. And to answer the first question just about everyone asks: their bathroom was located indoors, in the adjoining art gallery. 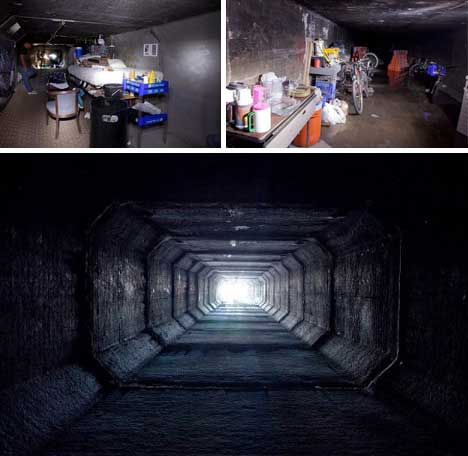 It’s long been thought that whole societies of people dwell beneath large cities, living out their lives in a world completely hidden from the one most of us occupy. In her 1993 book The Mole People, Jennifer Toth exposed and explored the vast society of people living under the surface of New York City. Making their homes in abandoned subway tunnels and using discarded materials to build makeshift shelters, these “mole people” remain largely invisible to surface dwellers. They are so invisible, in fact, that many people doubt Toth’s accounts of their underground lives. But a 2009 article in London’s The Sun exposed a similar conclave living in the storm drains beneath Las Vegas. Complete with interviews and photographs, this story seemed to confirm what many had previously called an urban legend.

A City of Garbage Collectors 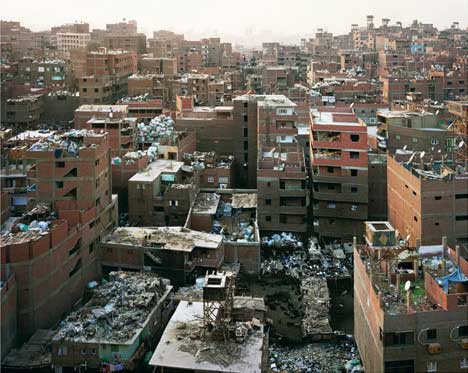 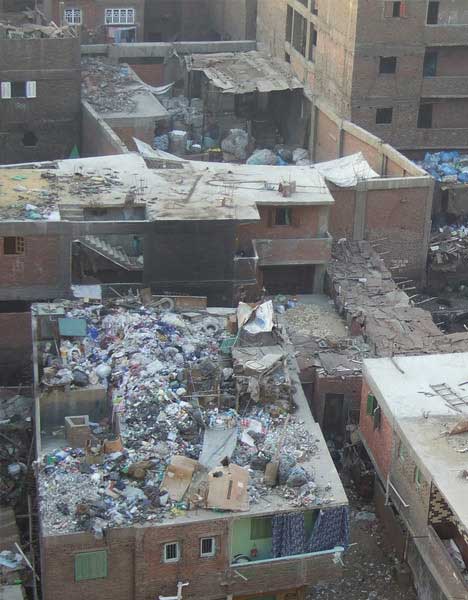 On the outskirts of Cairo sits a city that defies logic. It looks like a scene straight out of the movie Wall-E: every available surface is covered in garbage. There are piles of it in every building, on the streets, even on the rooftops. In between the mountains of rubbish, herds of pigs nosh happily on whatever organic matter there is to be found in the refuse . Yet this isn’t an abandoned place left to be taken over by wildlife: it’s a city of 30,000 inhabitants. Manshiyat naser, usually known as Garbage City, is filled with people who make their living collecting and sorting trash. They put aside anything that can be recycled for money or sold and feed the organic refuse to the pigs (or at least they did until the swine flu of 2009 forced Egyptian officials to remove the pigs). The area functions much like any other city, having shops, schools and churches, but lacks a stable infrastructure to provide amenities like electricity, running water and sewer service. The people who live there aren’t paid to haul the garbage away from apartment buildings, but they are sometimes tipped for their services and manage to support themselves by sorting Cairo’s trash.

Life in a Cage: The Crowded City 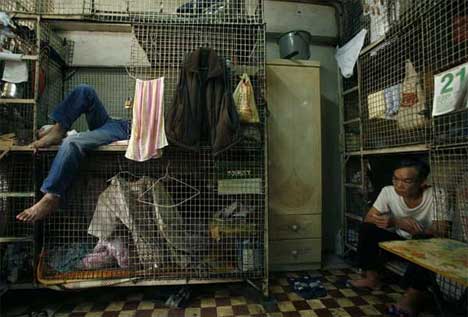 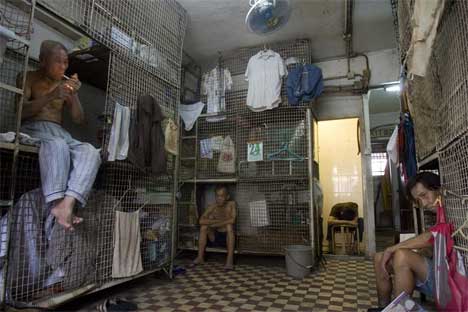 (images via: Pop-Up City and Schoeni)

An unfortunate side effect of urbanization is the skyrocketing costs of city life. In Hong Kong, property prices have reached world record highs. In response to the unaffordable prices of even small apartment, people have been living in wire cages like these for years. The enclosures are tiny, and it can get unbearably hot with all those bodies in a small space. In a CNN story from October 2009, residents revealed that there were 19 people living in a 625 square foot apartment. A bottom-level cage will run you around $150 a month, whereas an upper-level enclosure would cost closer to $100 because they are slightly smaller. While these residents aren’t exactly squatters – they pay exorbitant rents for the amount of space they live in – they certainly are off-grid. There are two toilets for all 19 residents, one faucet, no shower, and their electricity is “donated.” Many residents end up living in cages because of the failing Hong Kong economy and the poor job market.