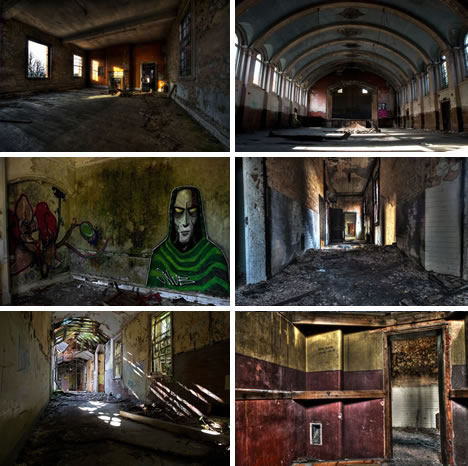 When you look at these photos, do you think death and derelict nightmare or do you think urban explorers’ dream? Explorers dared security guards and guard dogs to investigate and to photograph the decaying, otherwise forgotten, and rotten bedlam of massive Hellingly Asylum. Maybe these adventurers are just insane, or maybe they wanted to sift through the eerie and unspeakable beauty of the Victorian hospital complex. Hellingly Asylum even had an electrified railway, so let’s go off the rails on a crazy train to explore the decomposing mental hospital since it is at this moment being torn down. Here’s an ode to abandoned Hellingly Mental Asylum with 33 creepy photos. R.I.P. 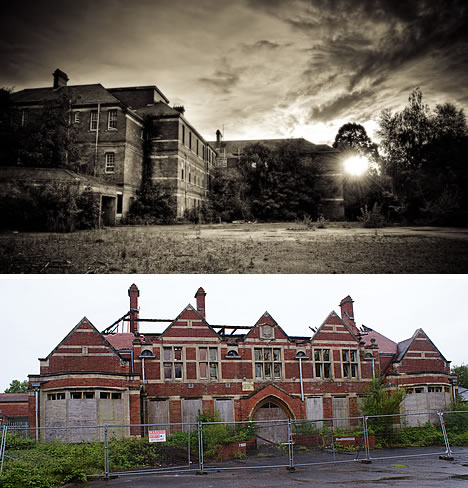 Hellingly Hospital was designed by asylum architect George Thomas Hine and was one of the most advanced asylum designs ever constructed. Hellingly Asylum opened its doors in 1903 and then closed them permanently in 1994. Most of the psychiatric hospital is to be replaced by new housing. Good luck with that to those of you who think you will live peacefully on a land soaked with trauma.

Patients and staff all lived in red brick buildings, villas of this gigantic asylum. Men and women lived in separate wings. There were big windows to let in as much light as possible. Even as “advanced” as it was thought to be, Hellingly was also a place where women who had children out of wedlock were incarcerated. (Unless otherwise credited, all images are from Howzey, urban explorer and photographer extraordinaire.) 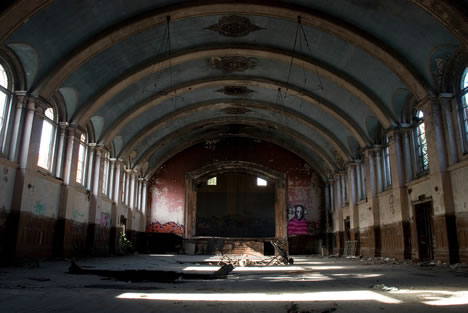 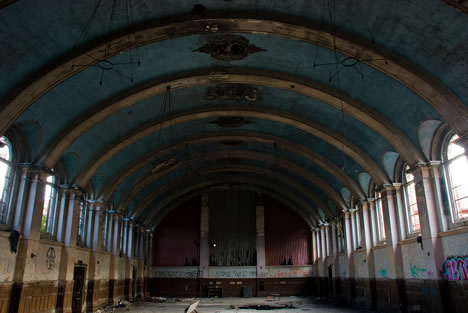 The decadent ballroom is only a tiny fraction of an asylum tagged, explored, smashed, trashed and a target of numerous arson attacks. In the theater, facing the stage, near the front right door, there was a hatch where some urban explorers were brave enough to crawl around the creepy underground passageways. 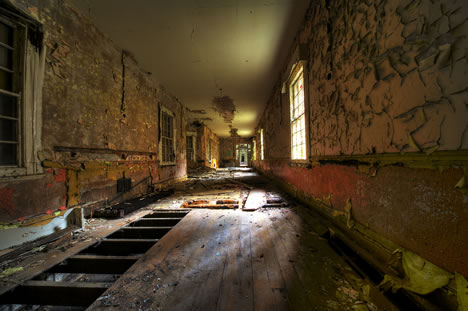 For over 20 years, abandoned Hellingly has been dying, fading, and peeling, but there is a lovely quality that makes you shudder about the ruination. Some explorers have reported hearing unexplained noises up and down the many corridors. Of course, old buildings make noises. The hallway above is one that was in “better” condition than many others. 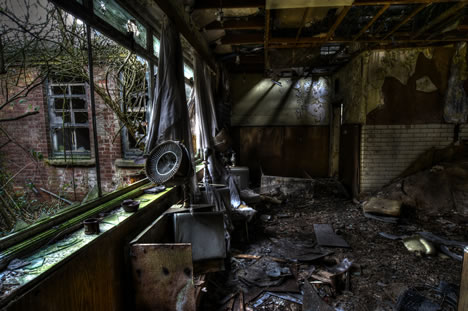 Besides having a farm, train, water tower, clothing store, boiler room, chapel, dentist office and so many others, there was also a Hellingly Hair Salon. This room has been heavily vandalized and photographed about as much too.

Arson left its smoky and charred touch to the kitchen and central stores, the administration block, medical officer’s residences and much more. There is substantial fire damage to the above Hellingly Hospital corridor. 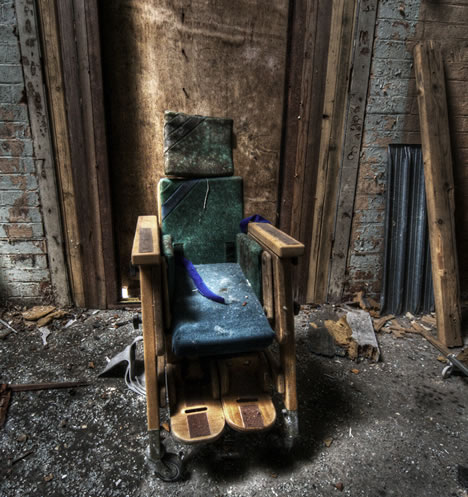 There is something utterly creepy about seeing a child’s wheelchair in the decaying mental hospital. According to county asylum records, Hellingly Asylum had a special building just for “mentally defective” children. Of course, this was back in a time when people were locked away in isolation, people with mental illness or an illness in which the family did not want to deal. 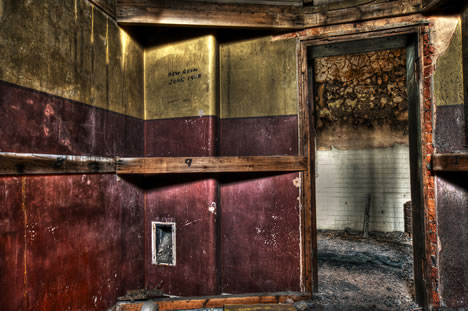 Outside one of the roasted toasty corridors is one of the many padded cells rooms. Other “advanced” facility care therapeutics included shock treatments. 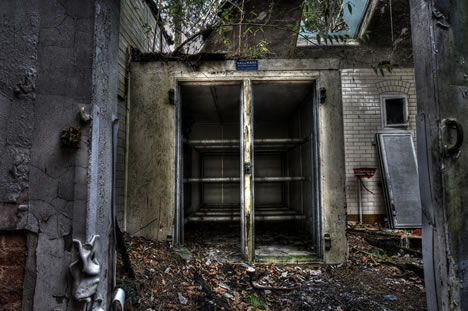 Hellingly Asylum even had its own morgue and the above body fridge. On the grounds, there could be found “body trolleys” for transporting human remains into this chamber of the dead. 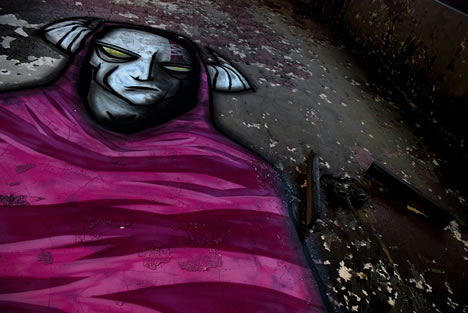 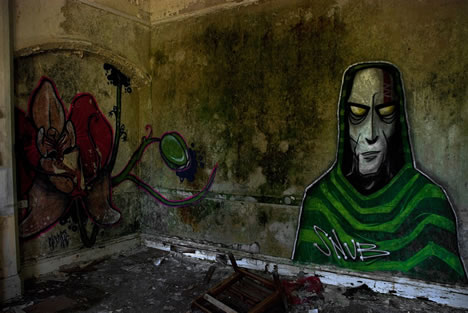 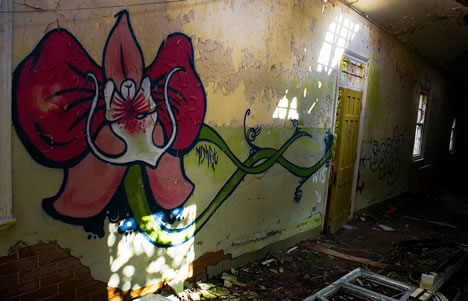 Some folks call it vandalism and others call it art, but many graffiti artists have left their mark up and down the hallways, rooms, stairways, and spooky corners of abandoned Hellingly Asylum. The top two photographs showcase works by Snub. 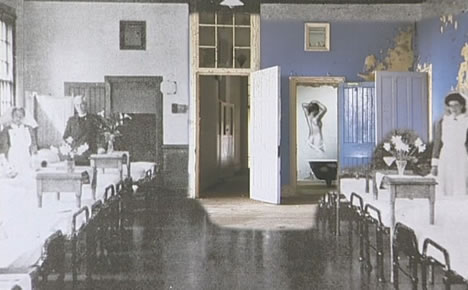 Graffiti artists can have a great sense humor, placing the semi-undressed woman carefully above the bathtub. The rest of the black and white portions in this picture are a product of merging Hellingly Asylum in its glory with its decrepit and tagged state now. 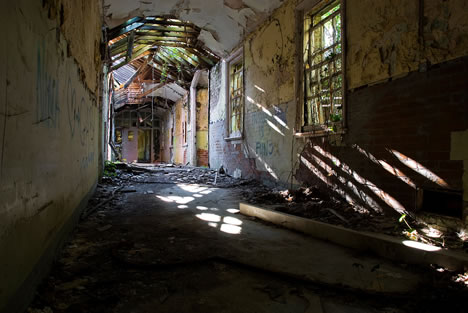 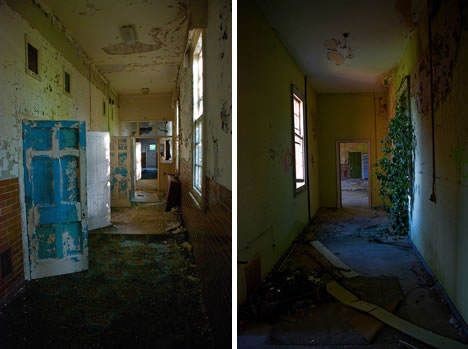 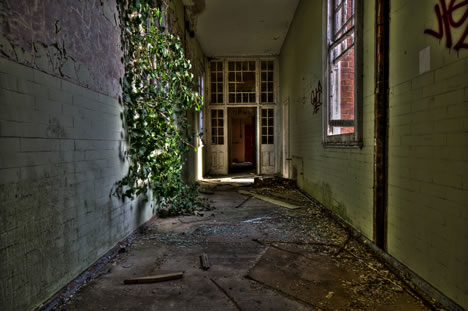 Given its sad state of decay for 26 years, nature was trying to reclaim Hellingly. The paint had peeled, the ceiling had crumbled in places, and the glass had been smashed out of windows, exposing the once grand Victorian architecture to be a victim of the elements. If this urban explorer’s paradise was not being destroyed, eventually nature would have swallowed the abandoned asylum whole. Perhaps the asylum ghosts were acting at night as gardeners? 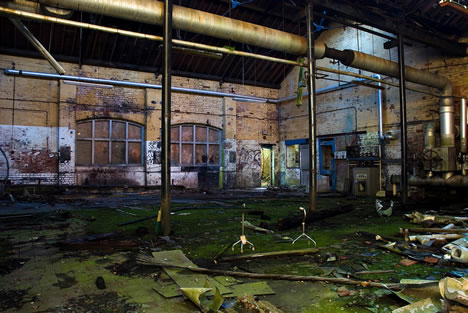 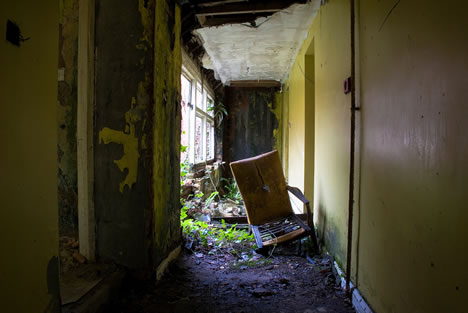 The top photo shows what was once a service area. Walkers, foam, mattresses, and clothing are scattered over the moss. The “Yellow Chair” in the bottom picture is in about the same state as abandoned Hellingly Asylum. Yet there is something infinitely sad about this decrepit hospital being demolished by wrecking crews for new construction. 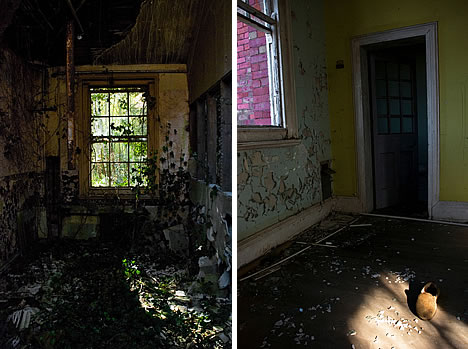 If the walls could talk within Hellingly, could you imagine the tales you might hear? Would the building scream in terror at what has happened within those walls? If you want to stay updated with the progress of destruction and demolition, Hellingly Asylum has a Facebook page. Some former patients, some children during their stay at Hellingly, report recalling a distinctive smell and plenty of scary memories from this place. 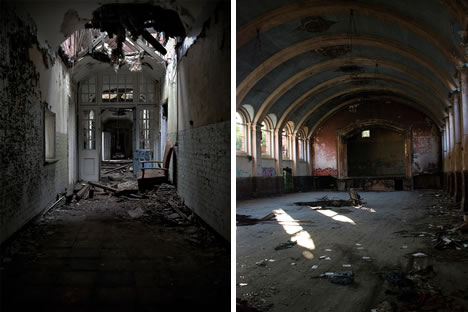 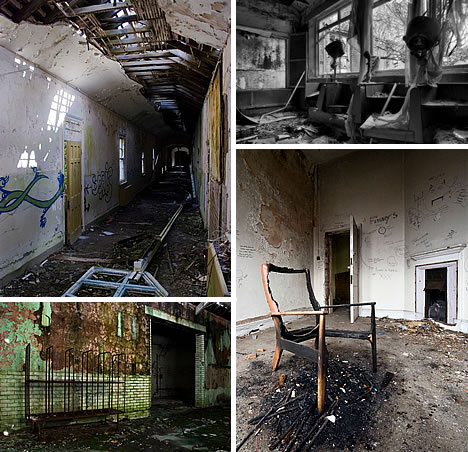 Since the asylum has been abandoned and left to slowly rot, exposure to the weather was not the only thing hammering on Hellingly. Signs of vandalism were almost everywhere. In theory, that is why security guards were hired. But there was something scarier than guard dogs and ghosts within Hellingly . . . asbestos. 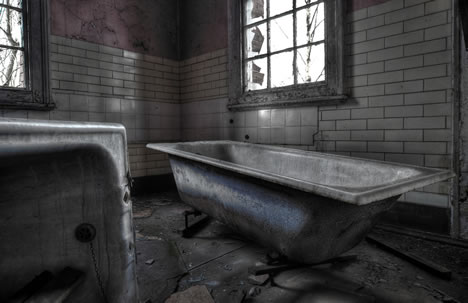 In its prime, Hellingly Asylum was a beautiful example of Victorian architecture. Just the same, that might not be overly comforting when having to bath in one of the many bathtubs along with many others in the “public” restrooms. 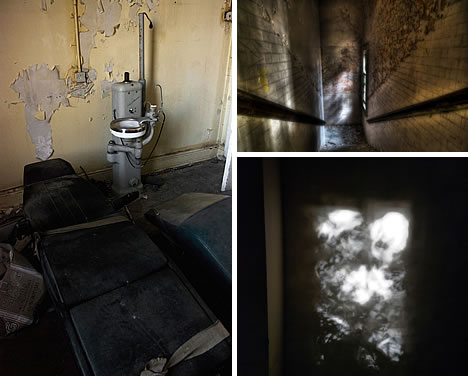 Goodbye Hellingly Hospital, where both good and bad happened. The huge complex will soon be nothing more than written stories and urban explorers’ documented photographs. Some people do not enjoy visiting the dentist. Add that with all that transpired at this asylum and it might send a shiver up your spine. Would you have gone down those spooky stairs, ready to bark at the moon and take on anything? Despite unexplained noises in the deserted and decaying asylum, would you have kept going if you ran into the ghosts in the lower right photo? Actually it is a trick of the trees outside and the moonlight . . . or is it? We salute urban adventurers in general and howzey specifically this time for sharing his pictures with us.