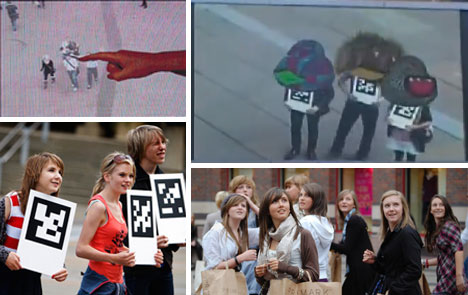 Once we move from childhood to adulthood, playfulness seems to take a back seat to responsibility. Many of us lose that sense of wonder and fun that makes all of our daily activities seem wondrous. Two recent UK public art projects have used absurdity to inject a sense of wonder and fun back into the daily lives of people who pass by the Big Screens in Liverpool and Edinburgh. 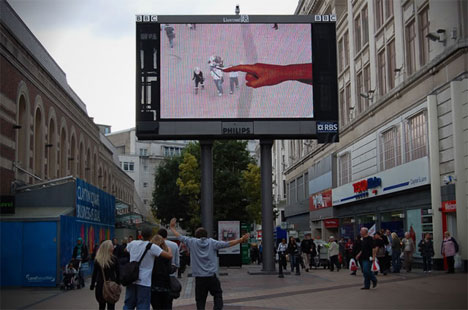 Hand From Above was the name of the project that appeared in Liverpool. The BBC Big Screen was the setting for Chris O’Shea‘s work that featured a live feed of pedestrians walking by in the square. As they went about their daily routines, a giant hand on the screen reached out to poke, prod, tickle and toss their likenesses.

With a distinct Monty Python flavor, the project encouraged passers-by to slow down, have fun, and maybe even pay attention to the world around them rather than drifting through their day without a thought. After spending four days in Liverpool in 2009, the Hand From Above moved to Cardiff for another few days. 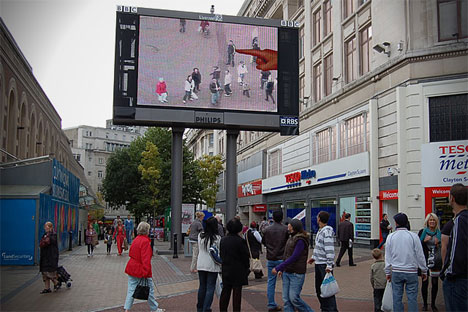 Hand From Above used a CCTV camera along with specialized software that chose “victims” based on a number of factors. Once the software identified who it wanted to pick on, it then used a complex series of motions to make the giant hand interact with the images of pedestrians on the giant screen. Just about everyone who saw the display laughed and stopped to watch, proving that even commuters on their way to work or shoppers in the middle of their tasks can spare a few moments for fun. 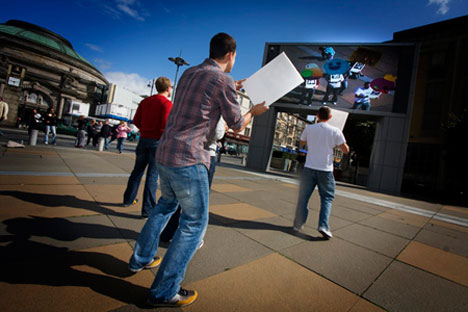 As in the Hand From Above, a live camera streamed images of pedestrians from the square in front of the Big Screen, but this time the viewers were willing and knowledgeable participants. They were given cardboard markers to hold up when they were in view of the camera, and the software then took over to replace their human heads with fun cartoon visages and abstract monstrous faces. 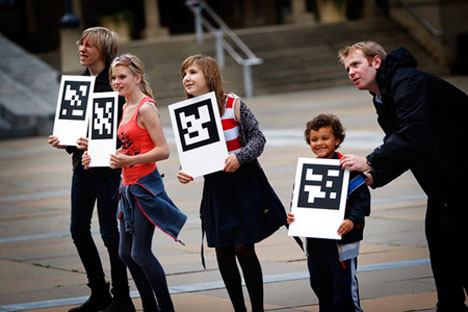 Because there was no clear goal in the activity, participants simply focused on having fun. They adopted fun personalities to go along with their new heads, lumbering around like monsters or dancing in place. The Big Screen, then, became a sort of magic mirror, with participants interacting with their own suddenly goofy reflections.