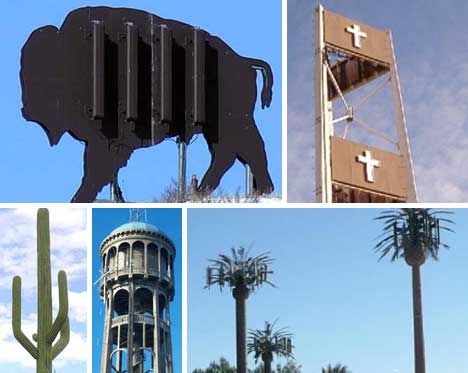 Not many people would voluntarily live next door to a giant cellular tower, but just about everyone wants to have uninterrupted cellular service. That problem used to vex mobile phone service providers, but then they realized that the solution was right in front of them: they would simply disguise new cell phone towers as everyday parts of the landscape. In the several years since cell phone providers have started the practice, they’ve come up with some amazing – and unexpected – ways to camouflage the unsightly towers. 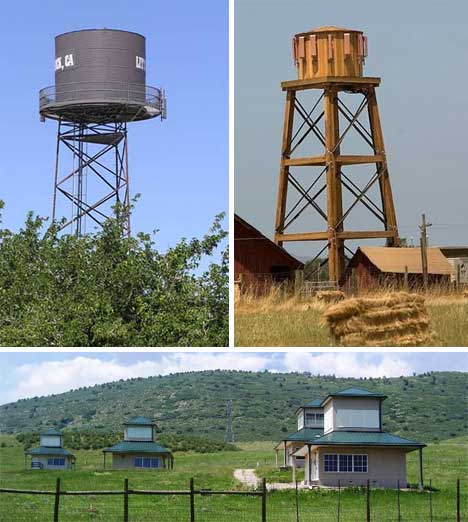 (images via: National Geographic, Steel in the Air, Big B Bob)

What do all of the above structures have in common? Not one of them is what they seem at first glance – they’re all hidden cellular sites. Cell phones are so ubiquitous that the towers that make them work have to be just about everywhere. The problem is that people don’t seem to like having huge cell phone towers in their back yards. Complaints from towns and protests from neighbors have led cellular providers to change the way they do business in some areas. When towns or neighborhoods don’t want traditional cell phone towers ruining their picturesque setting, the cellular companies get to work selecting the right disguise for the tower. 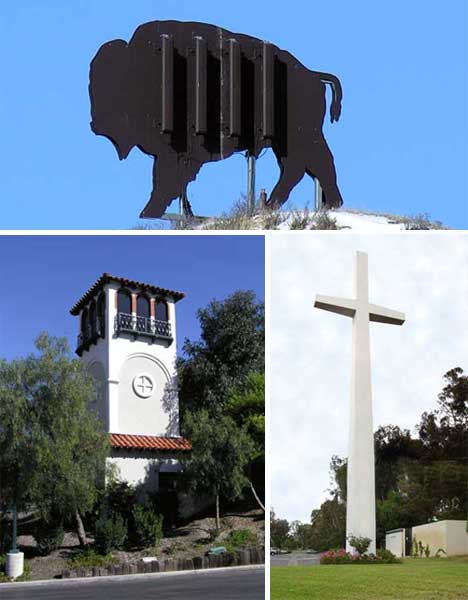 This isn’t a new phenomenon – companies around the world have been disguising cellular towers in this way almost since cellular towers first started going up in rural and suburban areas. Of course, urban cell towers often don’t require disguises since they’re in the midst of so many other towers, antennae and tall structures that most people don’t complain about one more going up. 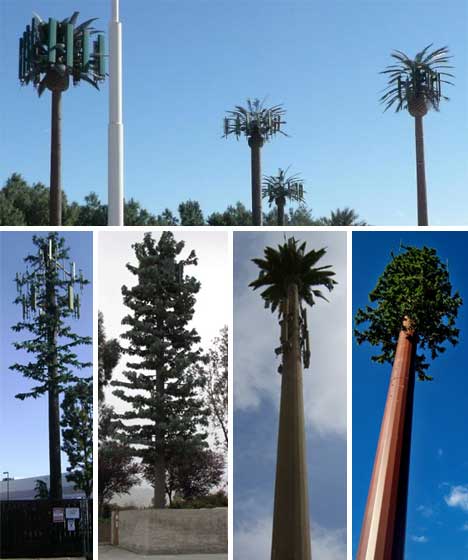 As for the disguises used, it depends on the area. By far, the most common disguise would be trees that blend in with the surrounding flora. But anything more than a passing glance will tell you that these trees aren’t what they seem to be at first. With their odd height, strange branch growth and constant, unchanging color, it’s pretty obvious that the “trees” are really bogus botanicals. And if none of that tips you off, maybe the weird machinery poking out of the tops of the trees will. 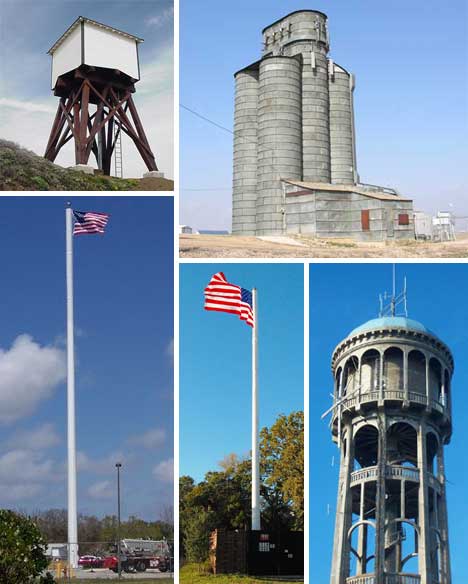 In areas where a super-tall tree might look especially out of place, cell tower camouflage companies (yes, there are entire businesses dedicated to this cause) can use any number of other disguises. Water towers, grain silos and flag poles are some of the easiest: they’re already present in many places, so they don’t look odd or suspicious going up in a small town. 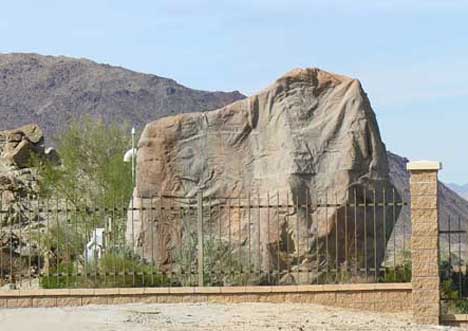 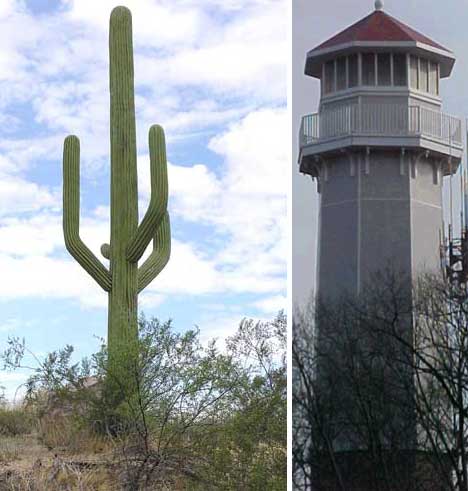 Even innocent items like boulders get in on the trickery; large rocks can hold electronics easily while still blending into the surrounding landscape. Buildings that look like landmarks but which are really just clever concealment for antennae and other electronics are becoming ever more common, as well. Some lighthouses on both coasts of the US attract plenty of tourists who have no idea that the “historic” buildings are new construction meant to make it easier for locals to chat away. 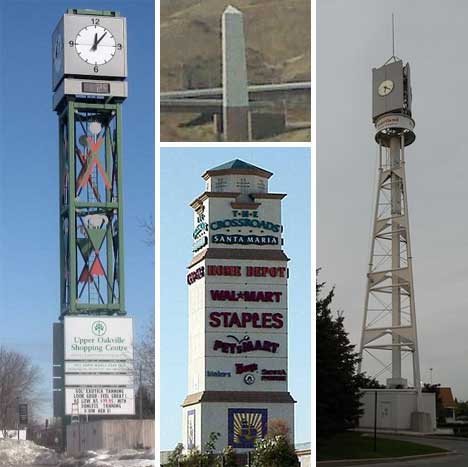 Clock towers and strange, unexplained structures might be a little more difficult for locals to ignore, but they are probably just a bit easier on the eyes than undisguised cellular towers. When there is already a tall structure present, antennae can simply be mounted right on the existing structure so that a new tower isn’t required. So when it’s possible, cellular companies will pay for the use of those existing structures rather than paying for a whole new tower – whether naked or disguised. 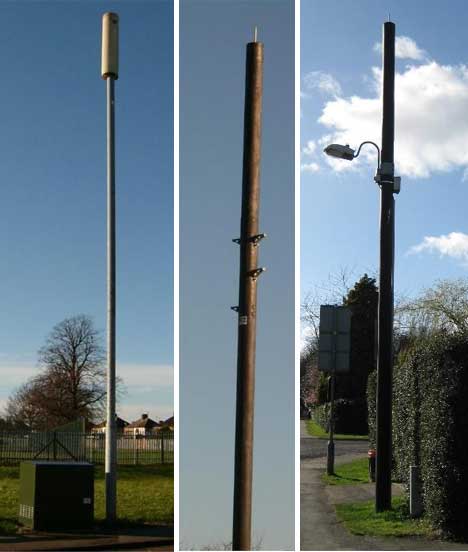 Some of the trickier disguises involve telegraph poles, traditional telephone poles, and light posts. These are a normal part of the landscape in most parts of the world, so many of us wouldn’t notice a new one going up. But one has to wonder: if a cellular tower is visually objectionable to residents, wouldn’t a new telephone pole be just as objectionable? If you’re tempted to think that these poles are actually what they appear to be, simply use of the services available for locating cell phone towers in any part of the world – the information listed there will tell you whether the new lamp post erected in your town is actually helping your calls come in loud and clear. 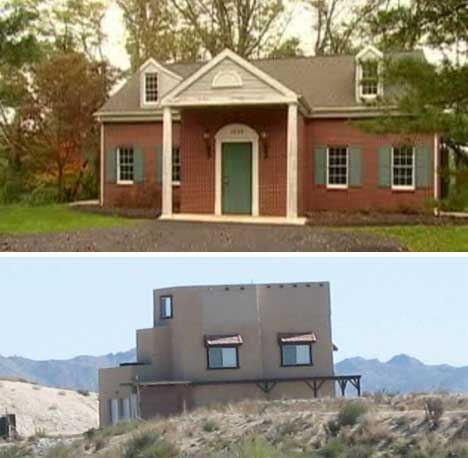 (images via: CBS News and Mojave)

Even houses are sometimes used to hide the communications equipment for cellular networks. From a suburban dream home in Arlington, Virginia to a Native American adobe home in Yucca Valley, California, houses and house-like structures are the perfect costume for cell sites. If they’re located on a hill or mountain, they can be used as transmitters on their own; otherwise, as is the case with the Arlington house, a tower can be placed right in the back yard. 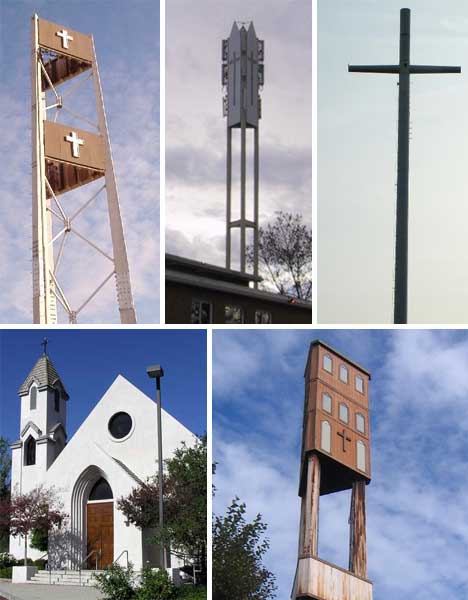 But perhaps the oddest concealment of all is the abundance of church steeples, crosses and signs that hide cellular equipment. Do they give you a direct line to heaven? Maybe not, but the churches usually make a fair bit of money by leasing out their steeple space to cellular providers, giving the church additional funds to serve the community while the cellular company keeps the calls coming in loud and clear.