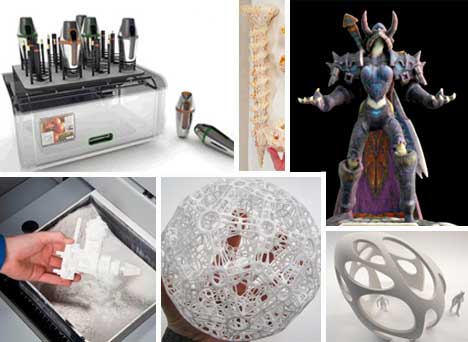 Manufacturing is about to undergo its biggest transformation ever, but it won’t come with big factories and a booming work force: it will happen with the use of small-scale 3D printers. Imagine being able to create just about anything you will ever want or need with little more than the push of a button. Everything can be made on demand, so there’s no waste and no need for warehouses to store loads of inventory. Although the materials and exact mechanisms vary, 3D printers all work in basically the same way: they build 2D layer upon 2D layer of material, following a three-dimensional guide, to create a 3D object. It sounds futuristic, but it’s happening right now thanks to 3D printers – and there’s no telling how far we can take this promising technology. 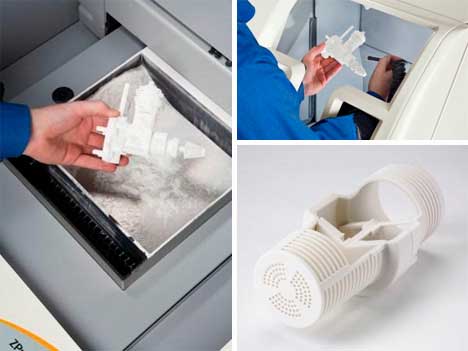 3D printing isn’t new by any means. It’s been around for quite a while, mostly in the architectural and manufacturing trades. It’s known as “rapid prototyping,” and it helps create a one-off prototype or a small batch of a new product. This ultimately saves a load of money for the company involved since they no longer have to invest in time, materials and equipment to perform a traditional manufacturing run – or build an expensive 3D architectural model. And since the price for 3D printers has been steadily dropping, we may soon see them in homes just as often as we see document printers. 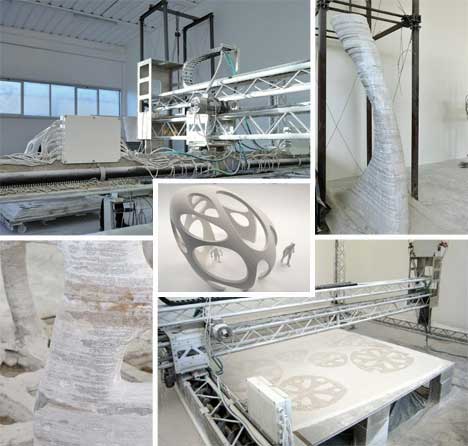 It seems that 3D printing has nearly come full-circle as far as its applications go. The technology that started off building prototypes of proposed buildings is now being used to print actual, full-size buildings. This massive machine was created by engineer Enrico Dini and ate up more than seven years of his life. It uses layers of sand and adhesive to more or less turn the sand into stone. Structures which would be challenging to create using traditional building methods could be easily printed and assembled on site. But even more impressive is that this method of printing buildings would dramatically reduce the cost and environmental impact of new construction. The machine’s inventor even thinks that it could help us colonize space one day, using little more than the dust we find on the Moon or Mars to erect buildings for space pioneers.

A Futuristic Factory in Your Own Home 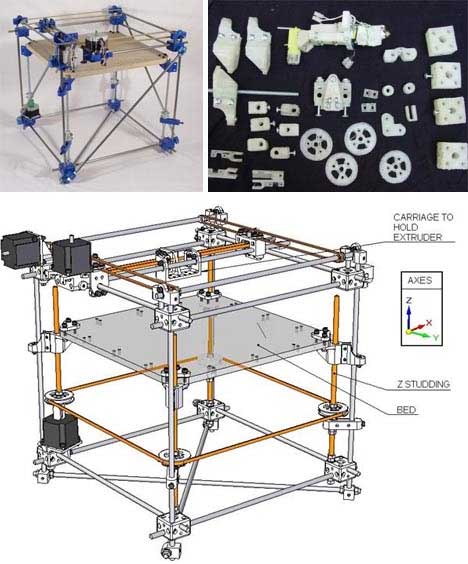 The technology and machinery behind 3D printing was once available only to large businesses with correspondingly large budgets. But as the technology has become more refined, it has also become less expensive. This has opened up whole new worlds for mid-size to small businesses, and even individuals. The RepRap is a perfect example of what can be done with personal 3D printing: its free, open-source plans make it accessible to absolutely everyone with the know-how to put it all together, and since it can print all of the pieces needed to build a replica of itself it can even be called a self-replicating printer. But it prints much more than just other RepRap machines: it can produce complex 3D objects – complete with moving parts – easily. Its creators liken it to the printers we already use at home to print documents and photographs, which not too long ago seemed far-fetched. 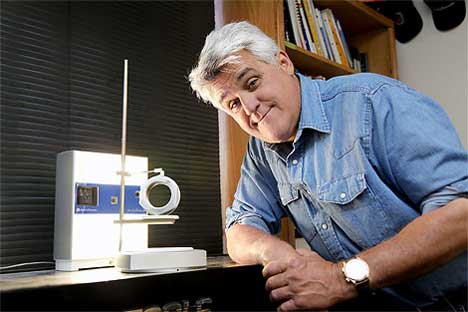 Even Jay Leno uses a personal 3D printer to create replacement parts for his classic cars. Many of the parts he needs are difficult or impossible to find, and giving the job to a machinist to create a replica carries a certain amount of risk. But Jay simply feeds the appropriate 3D model and material into the machine, and out comes a perfect replacement part. 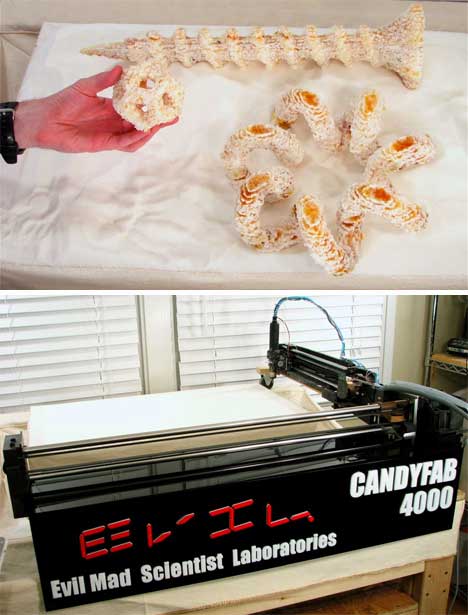 Back in 2007, Evil Mad Scientist Laboratories wanted to make a low-cost 3D printer out of recycled materials they had lying around the evil lab. They succeeded in doing that – and in capturing the imaginations of technophiles everywhere – with their sweet Candyfab 4000 machine. It prints low-resolution 3D objects out of nothing more than pure sugar and hot air. The evil geniuses created a new fabrication method, one they call SHASAM (selective hot air sintering and melting), and used it to selectively fuse layer upon layer of granulated sugar to make some odd (but admittedly very cool) objects. With all of the recycled materials they utilized, the machine only cost the Scientists around $500 – and if you want one of your own, the open source design is yours to experiment with.

A Manufacturing Service at Your Beck and Call 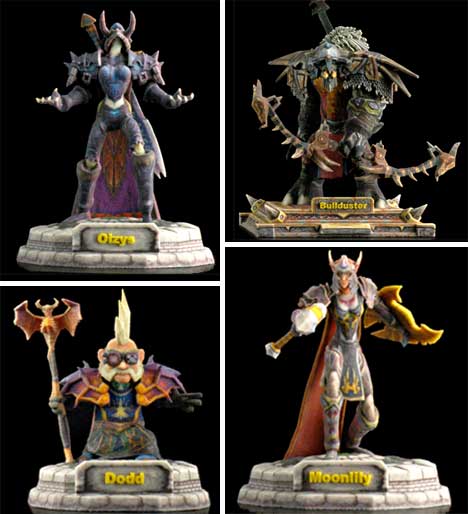 If you just don’t have the techie cred or the time to build your own 3D printer, there are some services out there that will use their own 3D printers to manufacture the fantastical products you conjure up in your imagination. FigurePrints is a service that, according to WoW fans, is long overdue. The company takes a 3D image of your World of Warcraft character and turns it into an action figure. This, of course, will delight everyone who has ever wanted to put their character into a pocket and take them to work.

Massachusetts company Z Corp, which is an innovator in the 3D printing world, teamed up with the makers of Rock Band to offer players customized action figures of their video game personae. After uploading a file of their character to the Rock Band store, a unique 6″ plastic character was born out of layers of powder, pigment and glue. 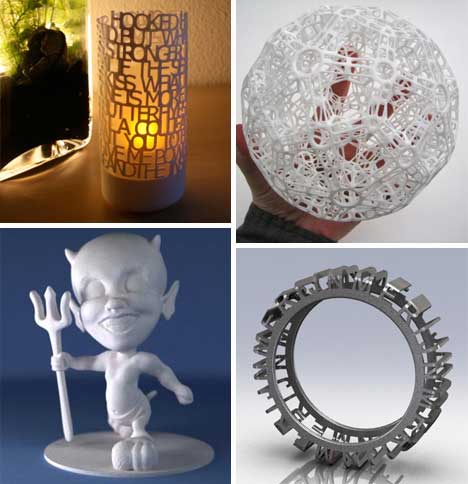 If you’re not into geek culture but would still like to create your very own, completely personal objects, there’s Shapeways. The company will print off your original 3D creations, giving you the amazing experience of holding your personal digital creation in your hands. But even if you’re not inspired to create something completely from scratch, the company also offers plenty of stock objects – and designs created by other users – that you can personalize with your own words or pictures, or just have printed off for you on demand.

Industrial materials and equipment are often used in novel ways to create art, but this is an example of the technology being used in exactly the way it was meant to be used and still creating a stunning artistic product. The M Museum in Belgium recently hosted a unique art exhibit featuring nothing but sculptures made with 3D printers. The results were astounding: even artists who don’t consider themselves sculptors could suddenly see their creations coming to life as physical objects. 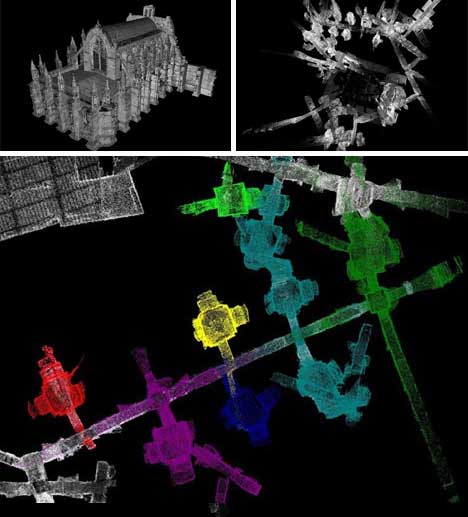 Of course, before those lovely three-dimensional objects can be printed, the program has to have a reliable digital model to go by. If you’re creating an accurate scale model of a city or replacing a damaged building, it helps to have the most accurate representation available. Thankfully, there are large-scale 3D scanners available today which can look deep into a dilapidated forgotten city, peer beneath the streets to see hidden catacombs, or simply catch every last detail of existing buildings for future reference. 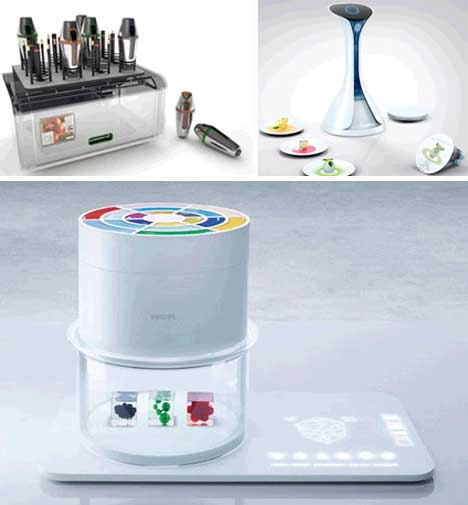 What’s in store for 3D printing? There are basically no limits to what can be done with this amazing technology. Various labs are working on machines that will print food, offering up a virtually endless array of flavors, textures and nutritional value. The Cornucopia from MIT, Electrolux Moleculaire from designer Nico Klaber, and Food Printer from Philips all use slightly different variations on the same theme to “print” food layer by layer. Hold the salt, please! 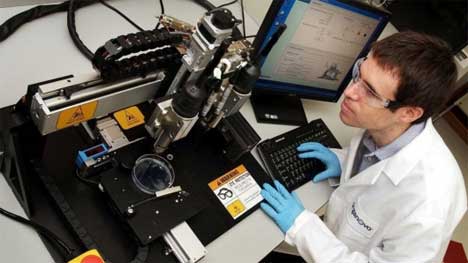 Perhaps the most exciting application of 3D printing is in the medical field. Recently, a company called Organovo produced its first commercial organ printer. Rather than waiting for donated organs to become available, or growing them in a lab (both of which carry the risk of rejection by the recipient’s body), this bio-printer would allow doctors to use the patient’s own cells to produce entirely new organs that couldn’t be rejected after transplant.