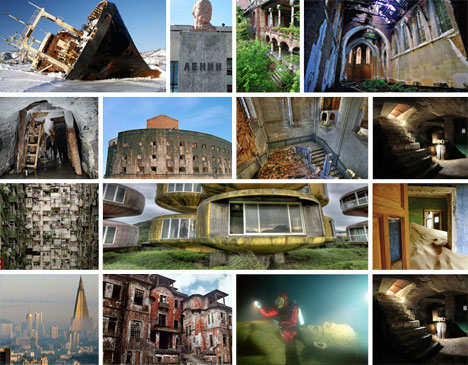 (WUltimate guides – Collecting the Very Best of WebUrbanist Past and Present)

WebUrbanist has covered everything from abandoned wonders of the world to the illicit art of exploring deserted places. These thirty-three core articles cover hundreds of abandoned buildings, vehicles, towns and cities from around the world – highly organized, summarized and collected for the very first time. Consider this our must-bookmark essential guide to the world of haunting abandoned places and daring urban exploration.

7 Abandoned Wonders of America (Part Two – Part Three): Most Americans don’t realize just how close their nearest abandonment might be. Some of these remarkable abandoned buildings and places – from prisons and asylums to entire islands – may be closer than you think.

7 Abandoned Wonders of the European Union: While American abandonments are impressive, European ones can be even more so. Some of them have long pasts and beautiful spaces filled with intrigue and many played critical roles during pivotal points of world history.

7 Abandoned Wonders of the Former Soviet Union (Part Two): The collapse of the Soviet Union left a dazzling array of abandoned buildings as well as entire cities. From modest towns to entire missile silos here are some of the most fascinating Soviet abandonments.

7 Abandoned Wonders of Asia: Asian design has long held fascination for those of us in the West. From a futuristic pod city to ornately decorated architecture to the failed opus of one of the world’s weirdest dictators here are some of the most amazing Asian abandonments.

24 Abandoned Cities and Ghost Towns: One of the most popular WebUrbanist articles of all time, this collection documents the most amazing abandoned villages, towns and cities from around the globe – from peacefully deserted to worn-torn abandonments.

24 Abandoned Buildings and Places: From shopping malls the school halls here is an overview, a visual sampling if you will, of some of the most common types of abandoned buildings that are spread throughout the world near and far, in urban and rural areas alike.

24 Abandoned Vehicles and Transit: Planes, trains and automobiles all wear down over time. Some of these are abandoned quite quickly while others are restored for decades before being deserted to the elements. From school buses to private jets, here are twenty-four examples.

24 Abandoned Places Shot in HDR: When applied to abandoned places in particular, HDR photography has a way of bringing out hauntingly vivid visual qualities that can otherwise be missed in photographic reproductions. These images bring abandonments back to life.

Abandoned Houses, Homes, Ghost Towns and Neighborhoods: When most people think of abandoned buildings the deserted places that come to mind most often are haunted houses and ghost towns. There are, however, even more haunting and ghostly examples.

Abandoned Institutions, Asylums, Hospitals, Hotels and Churches: Homes are one things but these homes-away-from-home can sometimes seem even more tragic and surreal. These are places with large spaces where people stayed for a time – resting, recovering or congregating.

Abandoned Theme Parks, Theaters, Schools and Pools: If institutions, hotels and churches are sober and somber places of gathering then theme parks and theaters are at the festive end of the spectrum – making their desertion a particularly poignant change of status.

Abandoned Factories, Mills and Mines: Workers once toiled in these spaces and the dirt and sweat of their labors can still be seen in the factory halls and on mine walls years later. Many are also cluttered with industrial remains from parts to whole machinery.

Abandoned Cars, Trucks, Buses, Tanks and Roads: Road vehicles are the first that come to mind for most people – and their abandonment is anything but uncommon as they rust and fall into disrepair. The roads that carry them are sometimes deserted as well.

Abandoned Railroads, Subways, Stations, Trains and Tunnels: Off the beaten path and often beneath the surface of the Earth, abandoned railroad and subway lines, stations and vehicles are frequently all the more eerie for their degree of preservation and remoteness of location.

Abandoned Ships, Shipyards, Boats and Docks: It is difficult to comprehend how something as big as a boat – let alone as massive as a ship or shipyard – can ever be worth abandoning. From small yachts to large steamers, however, there are many such examples.

Abandoned Airfields, Airplanes and Other Aircrafts: If deserted ships are difficult to believe then entire airstrips and air vehicles are even more amazing to behold. Go ahead, climb on board, fiddle with the controls, just don’t push buttons on jets with missiles still attached.

Beginner’s Guide to Building Infiltration and Urban Exploration: Just getting your feet wet when it comes to finding and exploring abandoned places? Here are some handy links to get you started on the right foot in terms of gear, approach, existing explorers and past explorations.

7 Tips for Legally Exploring Historical Abandonments: Not sure you want to take the plunge and break the law? That may be for the best and we certainly won’t endorse illegal activity. You could skip the thrill of sneaking in and be more straightforward about it.

30 Essential Websites, Forums and Galleries for Urban Explorers: Before you explore in the real world it might be worth looking at what others have already done. These resources are engaging even if you plan to remain on the sidelines but are also informative if you want to jump in.

42 Top Flickr Groups for Finding Urban Exploration Images: If you want to stay out of the game altogether there are still plenty of places to explore online. Flickr has dozens of photo groups dedicated to images of abandonments and organized into all kinds of niche categories.

Urban Exploration through Parkour and Free Running: One extreme way to explore an urban environment (though not recommended without training) is via parkour and free running – techniques for scaling the sides of and leaping between buildings in amazing ways.

Urban Camouflage for the Cautious Urban Explorer: Urban exploration requires a fair degree of stealth. You may want to disguise your camera bag, have a handy portable place to hide or even modify your vehicle so that it fits in when you park at an abandoned place.

10 Examples of Creative Urban Camouflage in Context: Of course, urban camouflage can be fun as well as practical. These urban camo designs are in some cases useful, in others artistic but in many instances are simply interesting and offbeat artistic statements.

Abandoned Movies Theaters of the United States: Abandoned drive-in theaters are an increasingly common sight on the sides of long rural stretches of highway. However, there are many magnificent urban theaters that have also been tragically left to the mercy of the elements.

Infamous Abandoned Places Used in Famous Films: Abandoned places have been featured in some of the most famous films of modern times from Twelve Monkeys to The Abyss. Some are what you might expect while others look very different in the light of regular photography.

Supposedly Haunted Houses and Hotels of the World: Do ghosts exist or can supposedly paranormal phenomena be explained in other ways? Regardless of what you believe personally here are some of the most infamous locations purported to be haunted in the world.

Historical and Mysterious Shipwrecks of the World: Shipwrecks are the sources of legend, from high-seas piracy and sunken treasure to great and tragic crashes like that of the infamous Titanic. Here are some stories and images of shipwrecks from around the seas.

Haunting Ruins of War from Around the World: War is devastating to populations in so many ways. Often the details are forgotten or changed and rewritten over time but there is a certain tragic truth revealed through the ruined structures left behind after the devastation.

Deserted and Converted Abandoned Missile Silos: Missile silos around the world become disused and then deserted- but in some cases explorers still manage to find their way in. In other cases, wealthy buyers purchase and convert these into amazing homes.