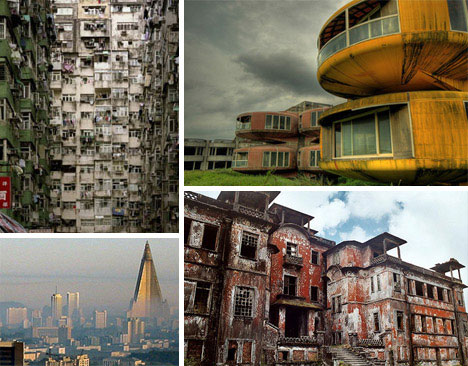 Abandoned buildings, properties and places take on remarkably different aesthetic character and are treated differently from one culture to the next – particularly in Asian nations where beliefs about the cultural role of architecture or the whims of a dictator can vary greatly. From South Korea to North Korea, Cambodia to Thailand and Azerbaijan to Hong Kong here are seven amazing oriental and subcontinental abandonments from the Near East to the Far East, from skyscraper hotels and pod cities to shopping malls and amusement parks and everything in between – fascinating remnants of past buildings and ways to see how the other half lives. 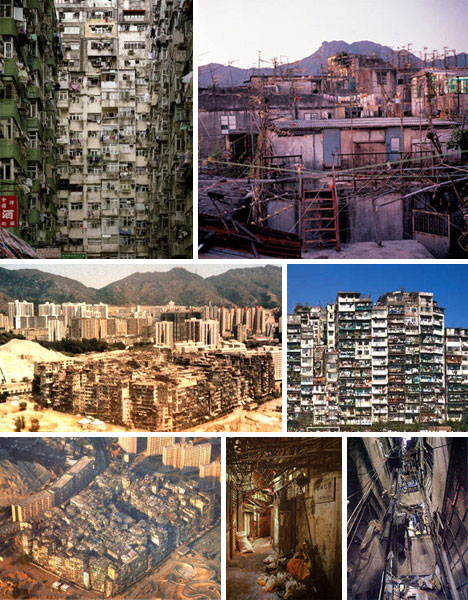 In the rogue ungoverned Kowloon Walled City in Hong Kong things were so tightly packed that trash blocked off parts of buildings and many occupied apartments literally never saw the light of day, almost as if the place were naturally becoming overgrown.  Like something straight from a William Gibson novel, there were no police or building codes – there was no law. For nearly 50 years this slice of Hong Kong was allowed to exist and grow independently due to a legal technicality. After the Japanese left following the second World War squatters swarmed to fill the space, with the population at 10,000 people (living on seven acres) by the early 1970s – a combination of dissidents, outlaws and both organized and disorganized criminals. Professionals who couldn’t get a license set up shop, criminals hiding from the law thrived, and the self-organized community grew to 35,000. Then in 1993 everything changed – no one wants to deal with this lawless place anymore and it is promptly destroyed and turned into a park. 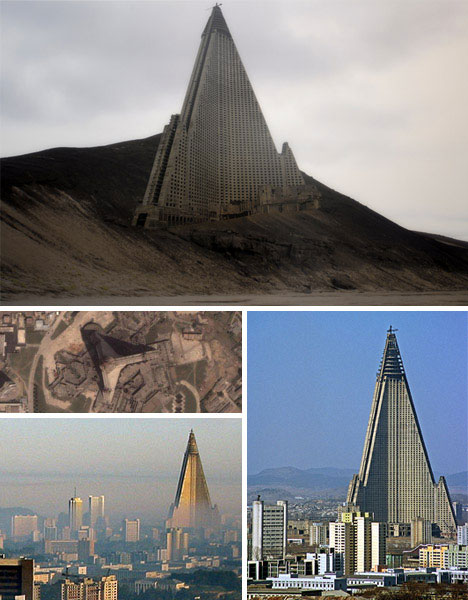 The Ryugyong Hotel in the capital city of Pyongyang, North Korea, was supposed to be a record-setting testament to the power, pride and ingenuity of one of the most totalitarian and self-insulating nations in the world. The building, meant to be a core monument to the strength of North Korea, was added to city maps and stamps before it was even half-built and was all set to be the tallest hotel in the world. At first the project simply ran out of funding, then as the low-quality concrete of which it was built began to sag and crack the sobering reality began to set it: the structure would need a massive overhaul to ever be completed. Now it goes unmentioned by tour guides, absent from maps and stamps, a symbolic blight towering on the capital city skyline. 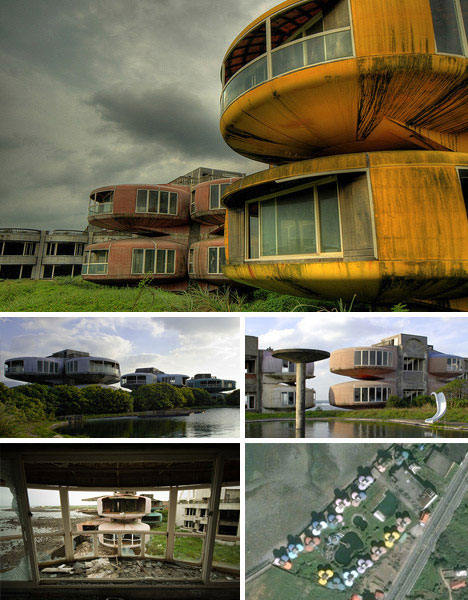 (Images via Cypherone and Yusheng)

Rumors abound regarding this legendary abandoned pod city (aka ‘UFO town’) of San Zhi, Taiwan, which was supposedly built by the government of Taipei to be a luxury resort for expensive holidays on the water. Built in the 1970s or early 1980s the modularity of the designs has raised retroactive suspicions that perhaps these stacks were intended to be built vertically over time. Theories on the abandonment of this massively strange undertaken range from poor insulation in a difficult climate, the dissolution of business partnerships, the failure of a regional real estate bubble or even that so many workers died during construction that the place was abandoned as haunted – unable to be destroyed out of a cultural taboo on interfering with the homes of spirits and lost souls. See it from above using Google Maps.

4) The Abandoned City of Agdam, Azerbaijan 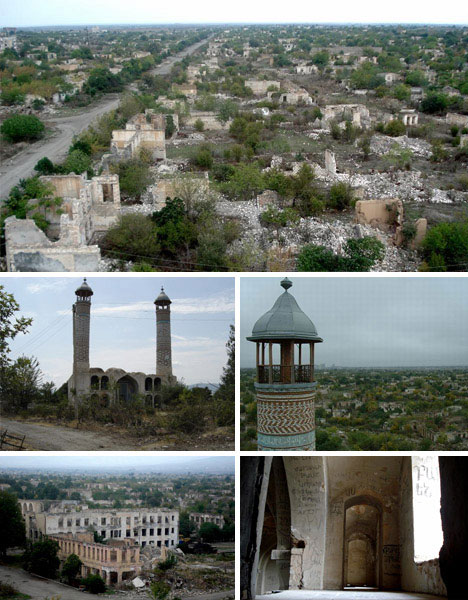 Once a capital city with over 150,000 people Agdam, Azerbaijan has been variously treated as a ghost town, a no-man’s-land and a military buffer zone in a troubled area of the world. In the 1990s it was vandalized and largely destroyed during Armenian occupation, its buildings looted and gutted and its mosque completely covered in graffiti. Currently considered part of Armenia this husk of a city sits in the heart of an area that is at the core of conflicted set of nations from Russia in the north and Georgia in the northwest to Armenia and Iran in the soutwest and south. It also sits at the curious geographical intersection of Europe and Asia, ambiguously defined as being part of both or either one of these continents. Given turmoil in the region it is unlikely to be rebuilt anytime soon – if ever – and its citizens have been displaced in all directions with little likelihood of returning home. 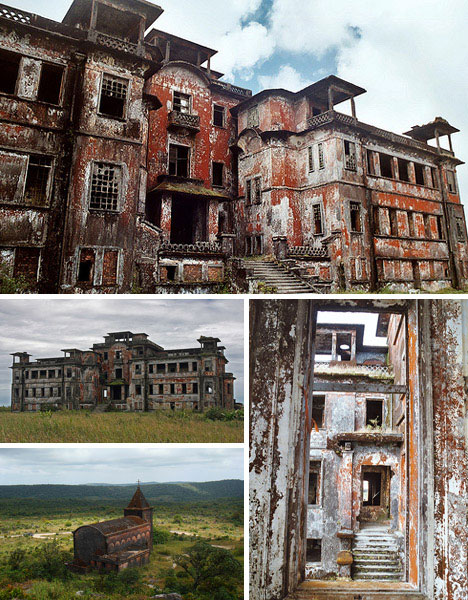 Bokor Hill Station is located on the mountain of Phnom Bokor, Cambodia and accessible only by a long trek across an overgrown dirt road to an elevation of 3,000 feet. At the top? The remains of a 1920s French retreat that has been deserted since the second World War including a hotel, casino, church, police station, post office, royal residences and other support structures. And today? The damage from mortar shells can be seen in shattered windows, crumbling staircases and decimated walls. The Khmer Rouge removed everything of any value – including the very wiring in the walls of the buildings. The ruins were later taken over by the Vietnamese in the 1970s before they were finally and permanently abandoned, though land mines in the area remain a danger to visitors who stray from the beaten path. Originally built due to the relatively temperate climate and wonderful views to the coast the area still boasts great sites from waterfalls to jungles and a vast array of wildlife. 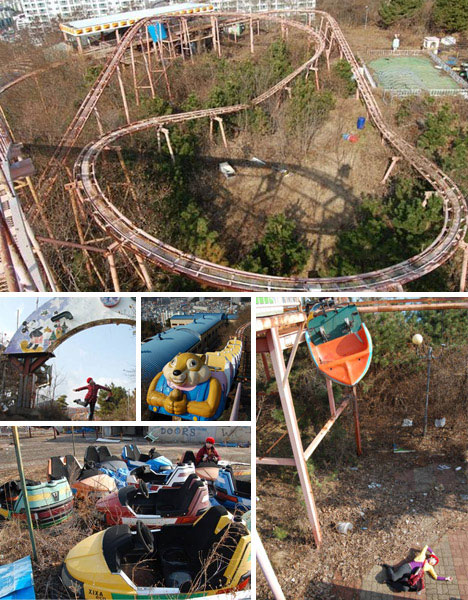 Once a thriving amusement park Opko Land in Opko, South Korea was abandoned after a young girl was killed in a tragic accident while on one of the ride’s. Though the park was shut down and deserted the family of the unfortunate victim was never compensated for their loss. Most of the structures remain more-or-less intact including roller coasters, bumper cars, a pool building and various smaller rides. The top image above was taken from the highest point of the roller coaster – an ambitious location to seek out and shoot from given the partial disrepair of so much structural elements in this abandoned amusement park.  One would think they would go all the way and destroy these buildings before some adventurous building infiltrators and urban explorers hurt themselves. 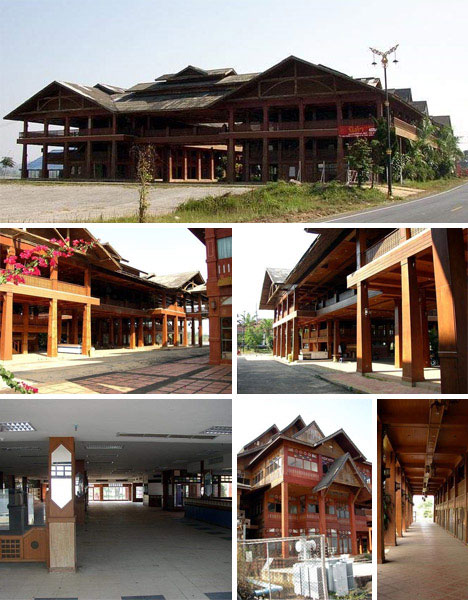 The Five Chiang Shopping Complex is a beautiful series of interlocked wooden structures that once constituted one of the most magnificent malls in Chiang Mai, Thailand, a city which (including sprawl) has nearly a million inhabitants. The city attracts many tourists each year who are drawn in part to local handcrafted goods such as umbrellas, jewelry and woodcarving – some of which is evidenced in the wooden decorations, balconies and terraces of this deserted shopping center. The complex was an international joint project that fell victim to conflicting political opinions and a depressed Thai economy and now sits remarkably intact but closed, locked and boarded and utterly unused. However, the local guards are reportedly quite friendly and a few kind words can let you slip past and get some essential background questions answered.