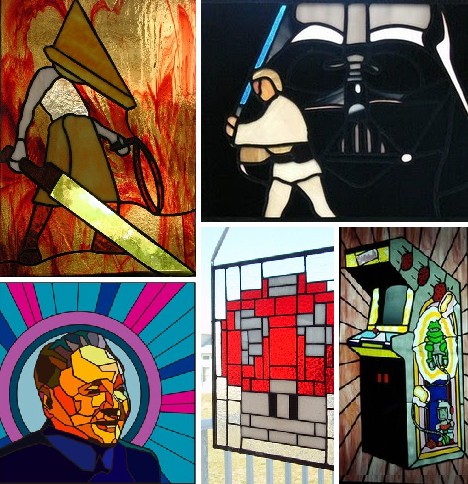 Stained glass… this ancient and ethereal medium combining art with engineering has long been associated with churches, cathedrals and other such houses of the holy. Times have changed, however, and this iconic art form with roots in medieval times is being used today to pay homage to what geeks hold to be holy. From the Middle Ages to Middle Earth, there’s nothing like stained glass to bring pleasure from pane. 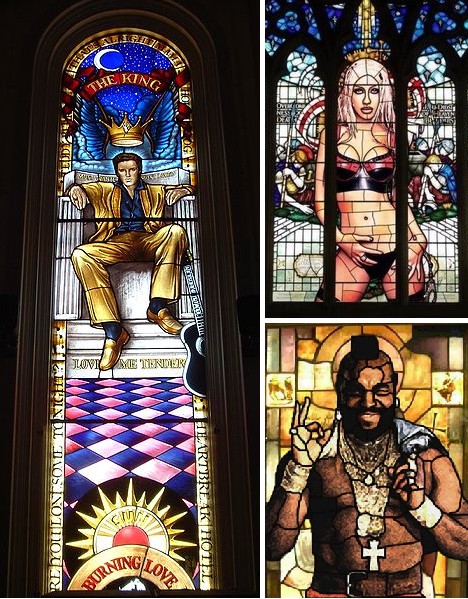 You might not find frozen tableaus of St. Elvis, St. Christina Aguilera and St. Mr. T. (“I pity the fool who doesn’t bow down to me!”) in your average house of worship – Elvis is immortalized at the Hard Rock Cafe in Dallas, TX – but you must admit the stained glass treatment gives these not-quite-saintly celebrities a heavenly glow. 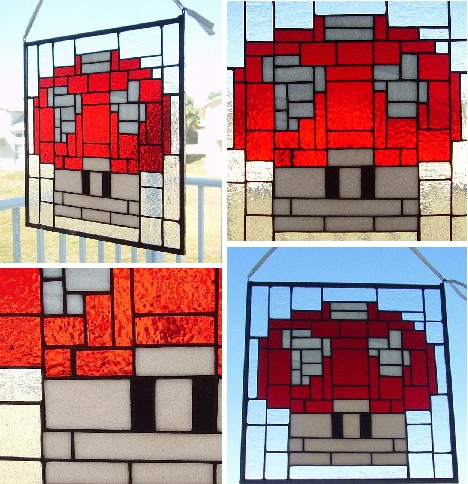 Amy Leigh Davis of Radiance Art has warmed the heart of every gamer with this stained glass Super Mario Bros mushroom. Early video game themes and stained glass seem made for each other – must be the blocky 8-bit format with its big ‘ol pixels. 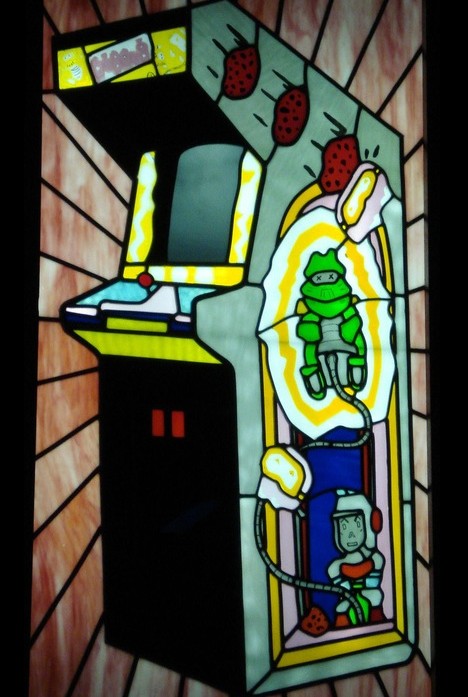 If the Ground Kontrol Classic Arcade in Portland, Oregon is a shrine to games and gaming, then what better subject for a stained glass window than a classic arcade game? In this case, Dig Dug. Just don’t try putting any quarters in the slot, or Ground Kontrol’s bouncer will ensure it’s Game Over for you.

Window On The East 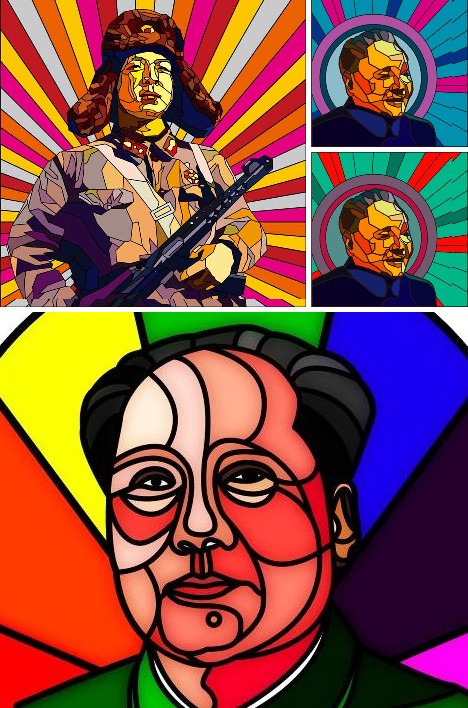 When is stained glass art not stained glass art? When its plastered across t-shirts designed by – who else – Plastered T-shirts. One wonders what the politburo back in Beijing thinks of these stained glass style tributes to icons of Chinese communism Mao Zedong, Lei Feng, and Deng Xiaoping? 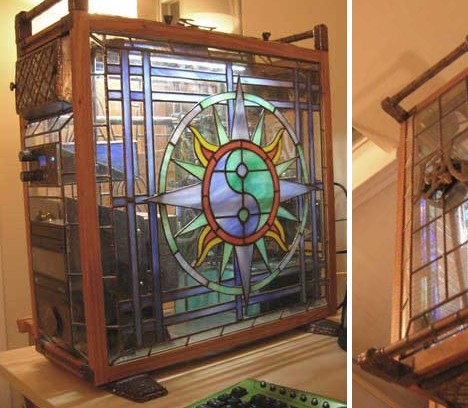 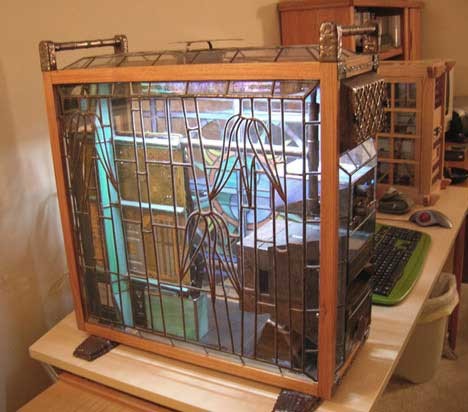 One thing the ancients had to do without when planning stained glass windows for the great cathedrals of Europe was CAD – computer-aided design. They would have loved this stained glass case mod from made from Canery wood, copper, and lead, highlighted by stained glass panels on all sides. 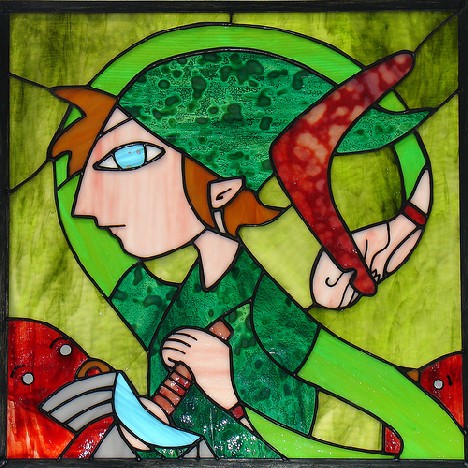 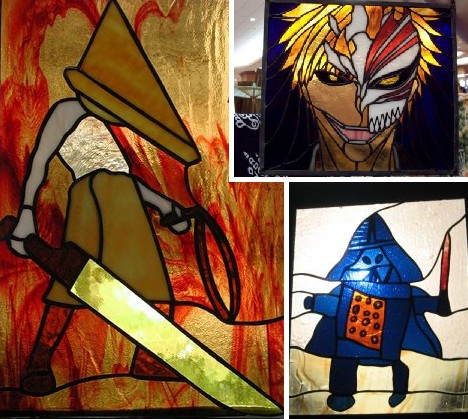 Video game characters like Pyramid Head from the Silent Hill video game series come alive (in a matter of speaking) when portrayed in stained glass. Just look at his sword… it practically leaps off the page, seeming to glow with reflected and refracted light. 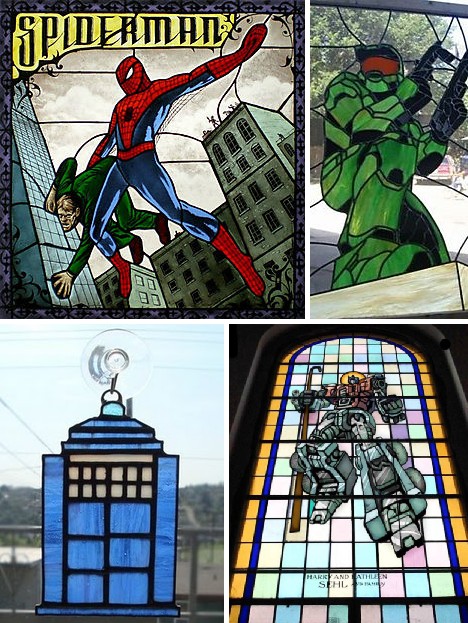 The above selection highlights some of the more interesting ways geek culture can be invoked through the medium of stained glass. While the Optimus Prime stained glass window is surely a photoshop creation, full props go out for the concept and the visual impact factor. As for the delightful Tardis in warm blue, we’re certain Doctor Who would find it well worth making a house call. 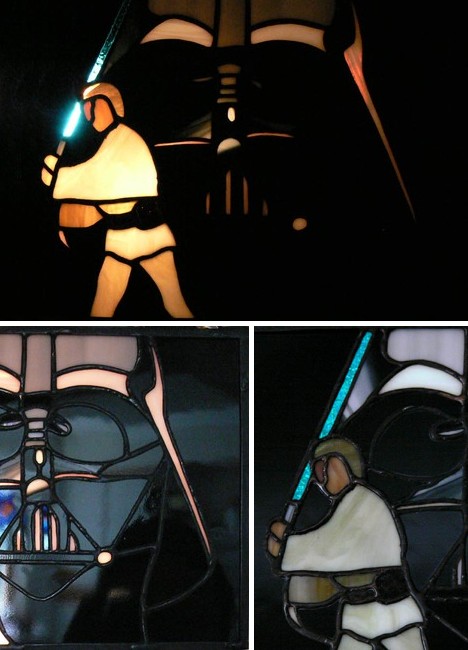 It’s curtains for you, Vader! Alas, it’s also most every window’s fate though it would truly be a shame to mask one iota of this wondrous piece by the appropriately named craftsperson GeekyGlass. By opting for simplicity, the artist evokes the essence of Star Wars’ epic contest of good vs evil. 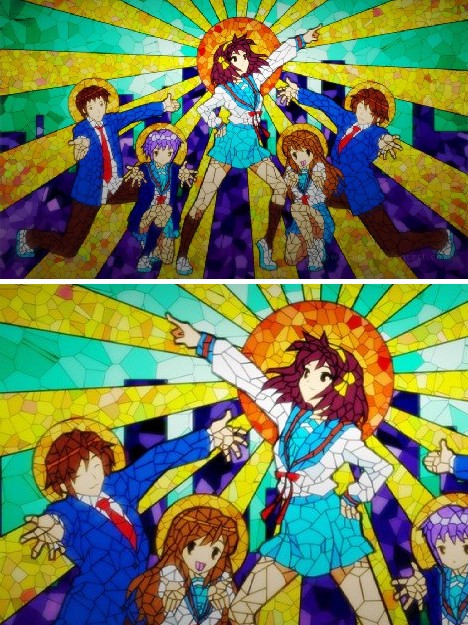 (images via: Through Eyes From Afar)

Another digital creation but awesome regardless, this celebration of “Haruhism” gently mocks the near-fanatical devotion fans in Japan and worldwide have for the anime goddess. Kudos to Snowpuma at Deviantart for composing this meticulous tribute. To quote, “Now with more blasphemy!” 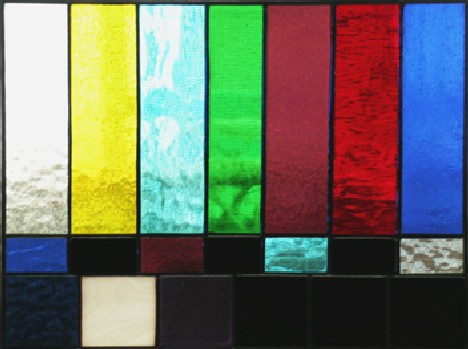 What better way to close an examination of geek stained glass than with an SMPTE color bar test pattern, often the last thing TV watchers would see after semi-dozing through yet another B-movie (or better yet, an MST3K trashing of one). Glass dismissed!