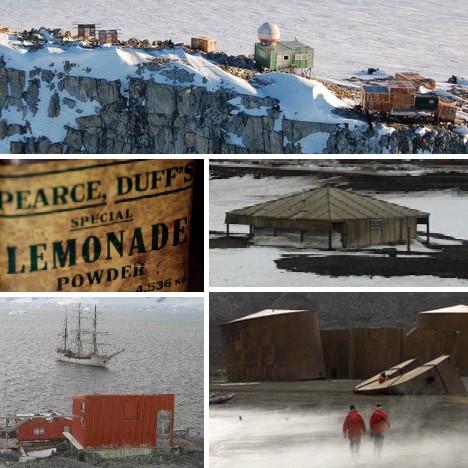 Antarctica – this huge, frozen continent is bitterly cold, inhospitable as Mars and as far from civilization as any place on the planet. Just getting there has been a struggle; staying there has been near impossible. These 10 amazing Antarctic abandonments, frozen in time as well as in place, bear mute testimony to mankind’s perseverance in mastering what is literally the last place on Earth. 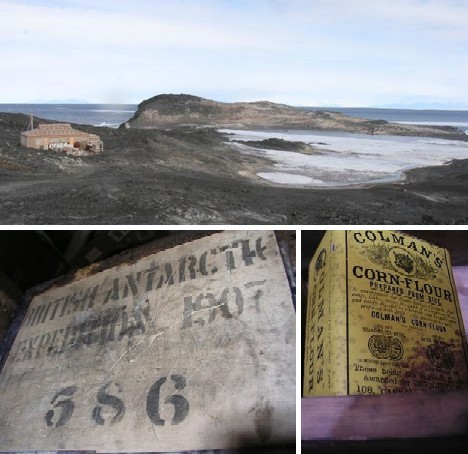 (images via: Fogonazos and Noah Strycker)

Sir Ernest Shackleton participated in a number of Antarctic exploration expeditions in the first two decades of the 20th century, including the 1907-09 Nimrod Expedition. Upon arriving at McMurdo Sound, Shackleton selected a landing site about 20 miles away from Hut Point, established by rival explorer Robert Falcon Scott during the 1901-04 Discovery Expedition. 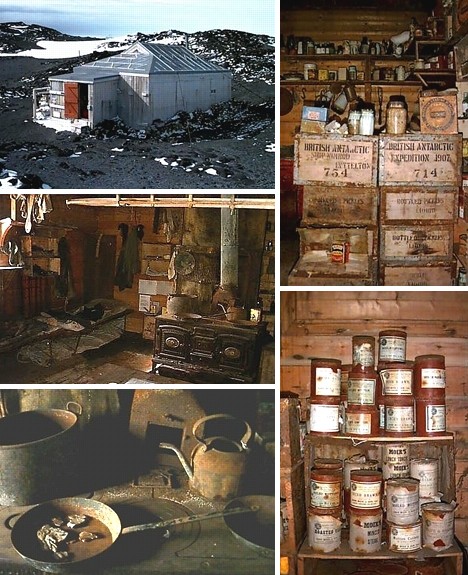 (images via: Icecubicle and Antarctica2000)

Though Shackleton pushed to within 97 miles of the South Pole, setting a record, he and his party were forced to turn back. When the expedition departed Antarctica in March of 1909, he left the fully stocked, pre-fab hut behind – where it still stands, not much the worse for wear, to this day. 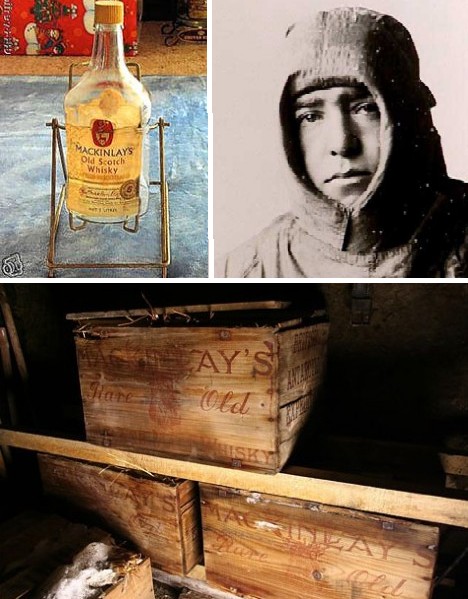 In 2006, a team from the New Zealand Antarctic Heritage Trust paid a working visit to Shackleton’s hut and made an exciting discovery: several cases of Australian brandy and Scotch whisky! The scotch, “Chas Mackinlay & Co’s ‘Rare and Old’ Whisky”, is a true treasure as the original recipe was lost. 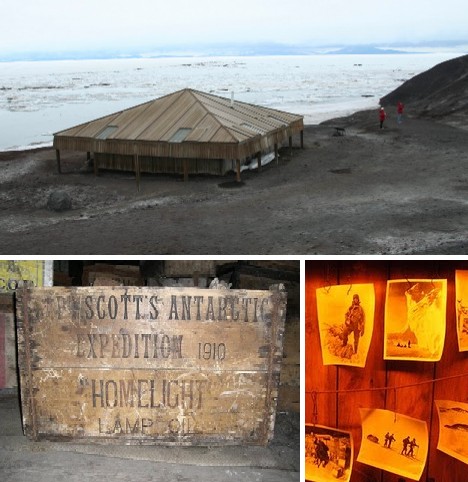 The heroic yet ultimately doomed Terra Nova Expedition led by Robert Falcon Scott in 1911 was based at Hut Point, the original base set up by Scott when he first arrived in Antarctica. Though Scott and his 4 companions reached the South Pole on January 17th, 1912, to their great disappointment they found that Roald Amundsen of Norway had beat them by nearly a full month. 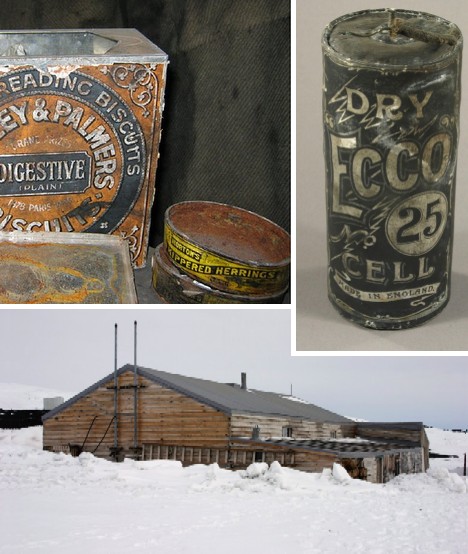 As history records, Scott and his team (Wilson, Oates, Bowers and Evans) did not survive the return from the Pole but their hut on Ross Island remains, preserved by frigid cold and low humidity. 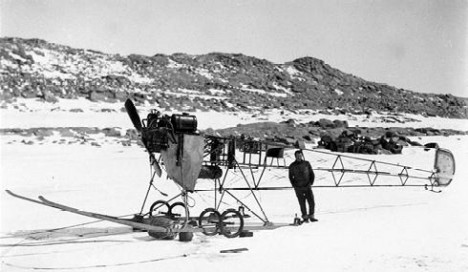 The 1911-14 Australian Antarctic Expedition (AAE) led by Sir Douglas Mawson set a number of scientific goals plus one rather surprising one: making the first flight over Antarctic territory. Unfortunately Mawson’s flying plans were scuttled when the aircraft, Vickers Monoplane No.1, suffered damage to its wings in transit and was used, wingless, as an air tractor. 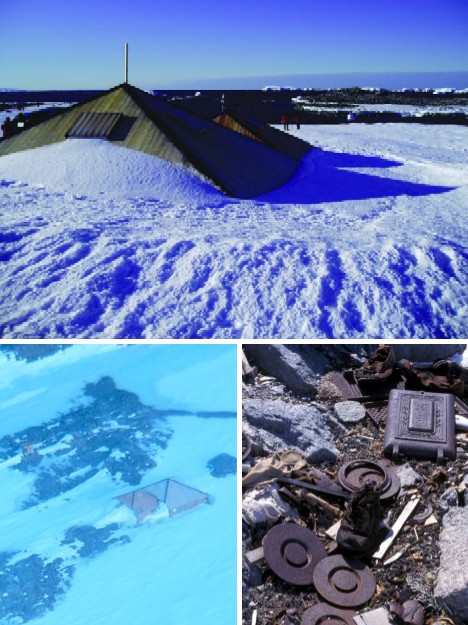 Mawson Station was abandoned in 1914 though Mawson returned for short visits in 1929 and 1931. Remains of the Vickers aircraft’s metal frame were discovered on January 2nd, 2010, by a team from the Mawson’s Huts Foundation. The original huts at Mawson’s base at Cape Denison can be seen above, nearly subsumed by decades of snow and ice. 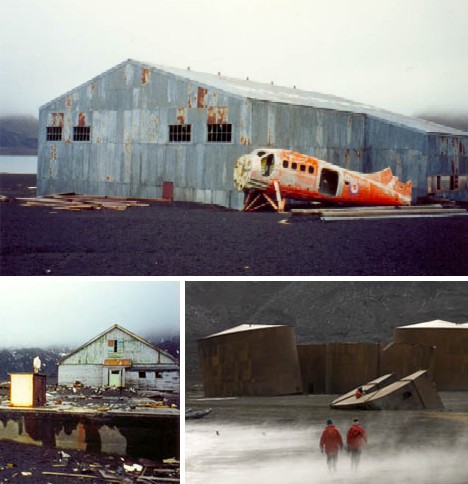 Ring-shaped Deception Island off the Antarctic Peninsula offered whaling expeditions of the late 1800s a sheltered harbor and shores – Whaler’s Bay – where they could process their catches. The island is also the site of an active volcano which last erupted in 1970. 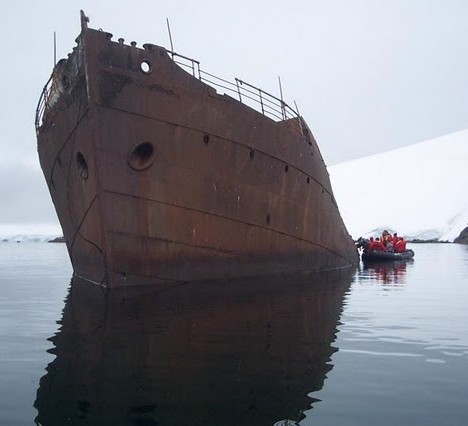 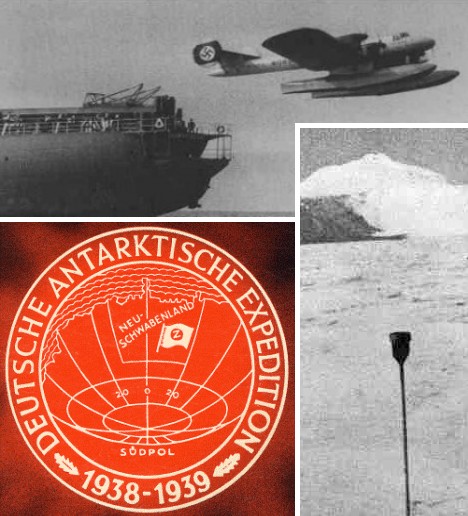 (images via: Echoes Of Enoch, Gnostic Liberation Front and Greyfalcon)

One of the most mysterious episodes in Antarctic exploration involves Nazi Germany, who claimed and explored a large area of Antarctica in the late 1930s. The expeditions included Dornier flying boats that mapped and photographed extensive areas of “New Swabia”. The planes dropped a series of Nazi flag pennants and boundary poles over the territory, none of which have been recovered… yet. 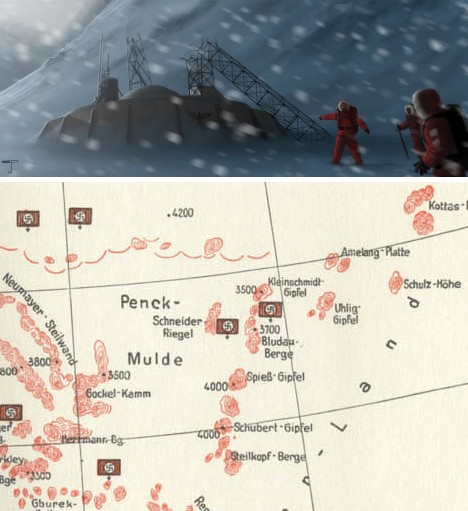 (images via: CG-IMDB and Barista)

Certain parts of the former New Swabia (Neuschwabenland) are clear of ice due to geothermal heating, fueling speculation the Nazi’s set up a wartime base there supplied by U-boats. In 1946-47, the United States sent a 13-ship task force that included an aircraft carrier and numbered 4,700 men to New Swabia, ostensibly to practice arctic warfare techniques. Operation Highjump was (and still is) shrouded in secrecy (many official documents pertaining to it are still classified), leading to even more speculation as to what the Nazi’s were really up to in Antarctica, if anything. 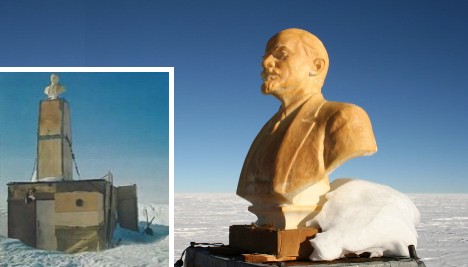 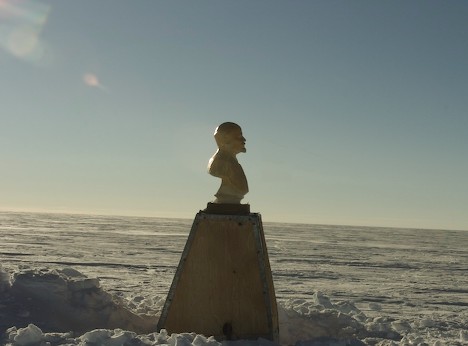 (images via: NPI/NSF and Paul Landry)

Antarctica features not only the South Pole and the South Magnetic pole, but also the Pole of Inaccessibility: The point on the Antarctic continent that is the most distant from any coast. Not the sort of place you’d want to leave anyone important, even if it’s a statue – yet that’s just what the Soviet Union did. 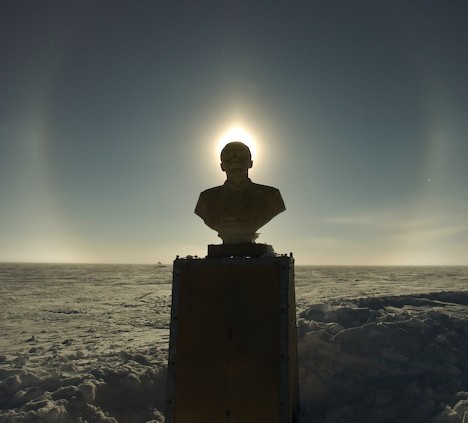 A truncated pyramidal building topped with a bust of Lenin was built at the P of A in 1957 to commemorate the 40th anniversary of the Russian Revolution. Though the Soviet Union ended up, as Ronald Reagan famously predicted, “on the ash heap of history”, this monumental bust of Lenin continues to cool his non-existent heels in a much, much colder place. 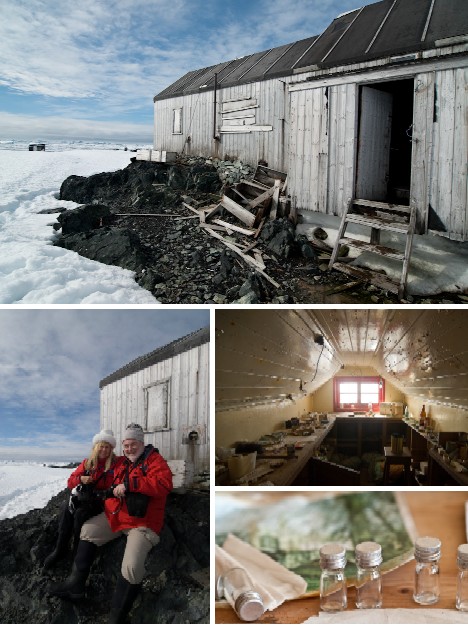 British Survey Base W was established in 1956 at the head of an ice-free bay on Detaille Island. At least, it was thought to be ice-free – the original surveyors arrived during an unusually warm summer. 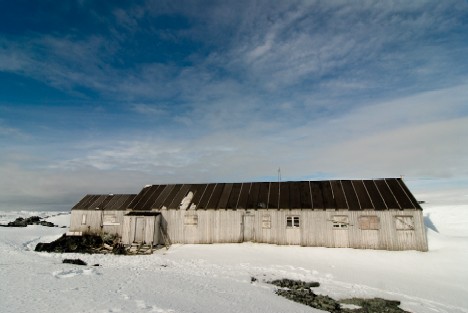 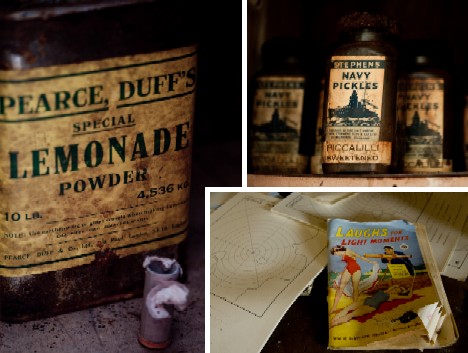 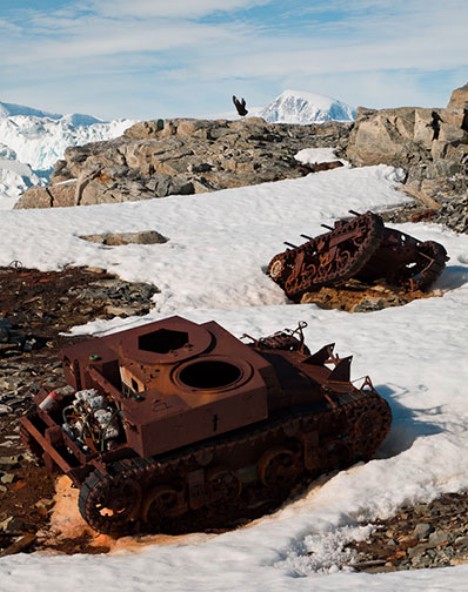 Located relatively close to where the New Swabia expedition landed in 1938, Dobrowolski Station was first set up by the Soviet Union in late 1956 and was transferred to the Polish government in 1959. The area around the base was described by Admiral Richard E. Byrd in 1947 as “one of the most remarkable regions on earth, an island suitable for life had been found in a universe of death”. 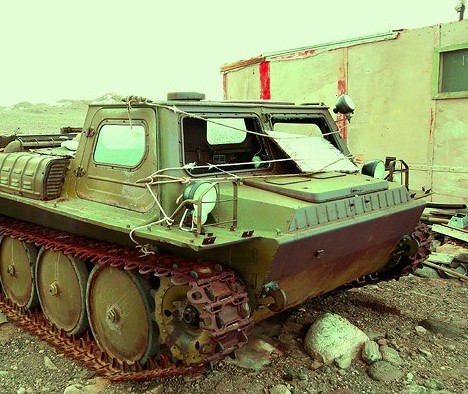 Evidently the Poles did not share Byrd’s sentiment, as they abandoned Dobrowolski Station after only a few weeks. It was last occupied by Soviet scientists from nearly Oasis Station in the early 1990s. 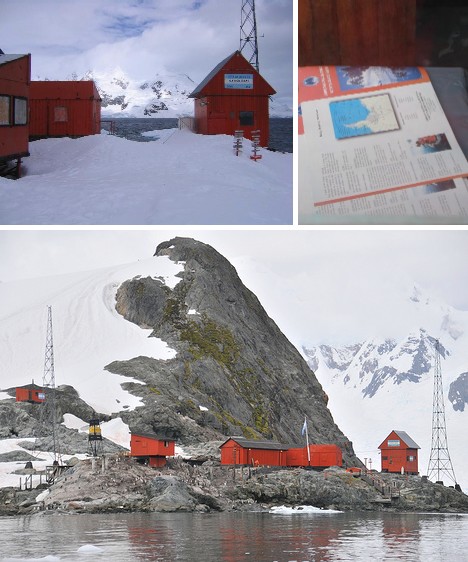 Whomever named “Paradise Bay” in West Antarctica must have read about Eric the Red’s naming of Greenland. Argentina set up a research station at Paradise Bay and named it for Admiral Guillermo Brown, father of the Argentine Navy. 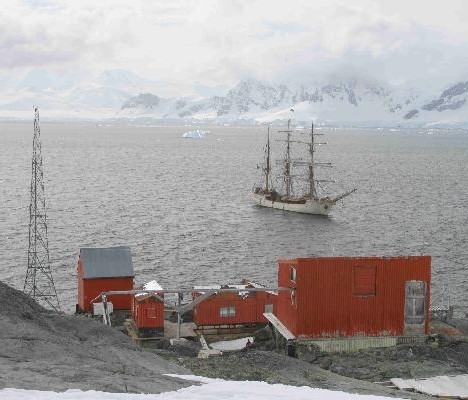 The story goes, a researcher was so upset at the thought of being left at Almirante Brown Station over the long, dark Antarctic winter that he set some of the buildings on fire as the supply ship was preparing to leave. The base burned, the researcher left on the ship, and Argentina was too broke to do anything about it. 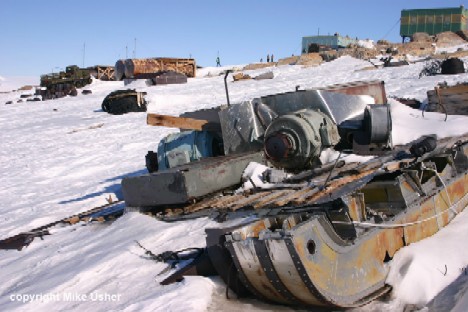 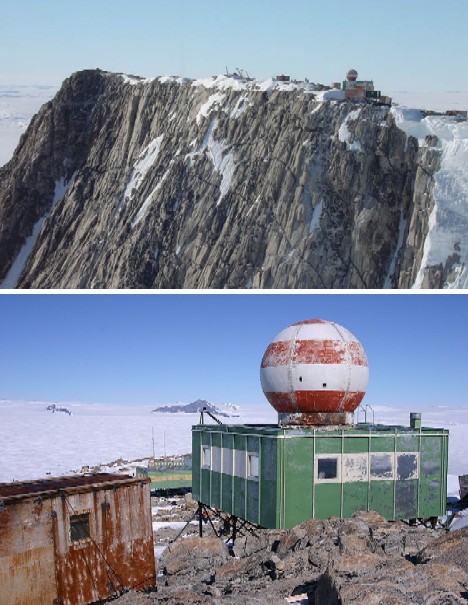 The Soviet research station “Leningradskaya”, located in Oates Land, was set up in 1971 and abandoned in 1991 in the wake of the fall of communism and the accompanying fiscal crisis that beset the country. 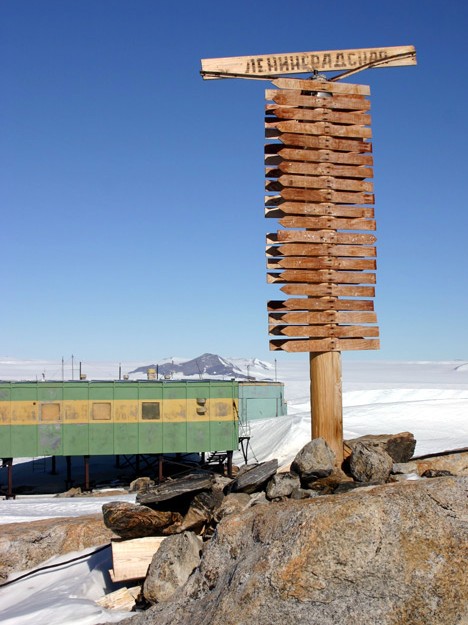 Today the remnants of the old station lie scattered around its remaining outbuildings – some of the metal surfaces barely display a hint of rust. Cleaning up the base is somewhat problematic… it sits at the edge of 100-ft high stone cliff looking out to the desolate Oates Coast of Antarctica. 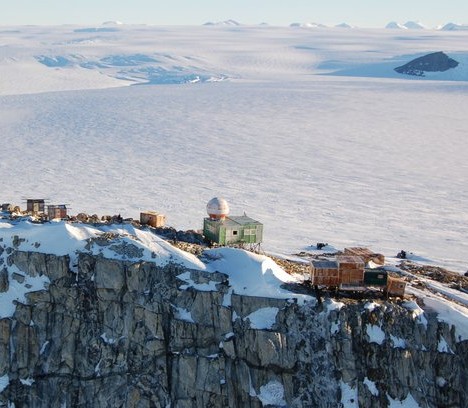 It’s easy to be smug and chastise a century’s worth of explorers for not cleaning up the messes they made in one of Earth’s most pristine environments. Take a walk in their shoes, however, and you might gain some understanding of how harsh a place Antarctica really can be… at the cost of a few fingers and toes abandoned to howling, 200mph katabatic winds that never, ever stop.