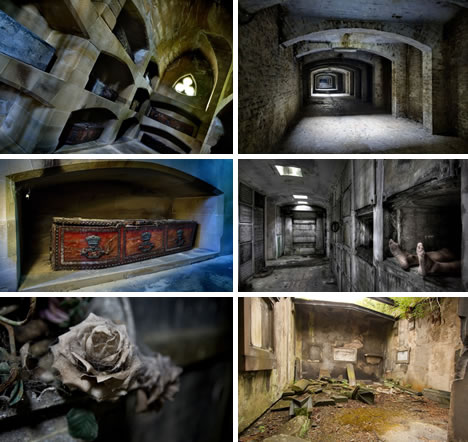 Crypts are stone chambers or vaults beneath a church usually used as burial vaults. In more modern times, family vaults were built aboveground in cemeteries and are usually referred to as mausoleums. When a cemetery or a church is abandoned, these decrepit crypts and the people buried in them are all but forgotten. In a tribute to Memorial Day, with the help of urbex, urban exploration photos, we will virtually visit and pay out respects to these 15 abandoned and creepy crypts. 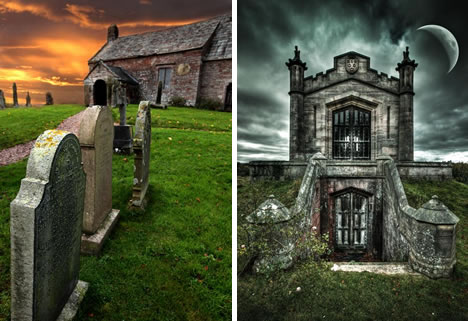 Although not the most common places to hunt, crypts are explored by urban explorers and ghost hunters. Imagine creeping through a cemetery as darkness approaches, armed with a camera, and with the intention of infiltrating an abandoned church and traveling below ground into a crypt. Here we go with this special brand of spooky crypt hunters for a few moments of remembrance and to pay our respects. 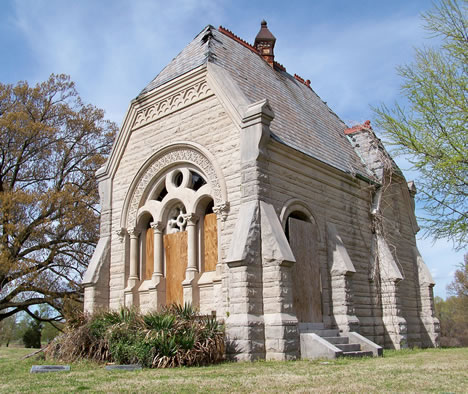 This abandoned chapel in Memphis, Tennessee, is boarded up and practically shouted to a few urban explorers to go inside and see what is there. The disused crypt portion had no coffins in the shelves, but the inside was in complete disarray. Old broken coffins were broken open and scattered throughout the place. Although there were no signs of any dead laid to rest here, and no corpses, it was still very creepy. 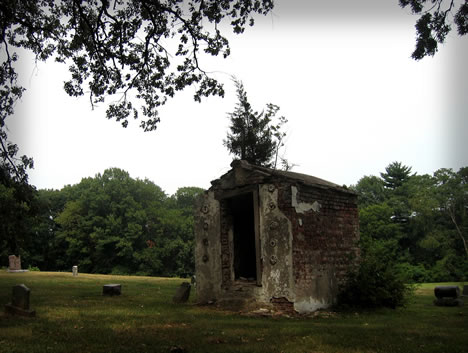 This very old mausoleum in Calvary Cemetery, Rock Island, Illinois, is far beyond abandoned. The decrepit vault is crumbling. The front gate or door might have fallen off as time passed or it might have been opened by grave robbers. Nature is reclaiming this mausoleum with a bush growing beside it and a tree growing on the inside and up through the roof. Although there is no sign of a coffin inside the mausoleum, there is musty dirt, dried up mortar and plenty of spiderwebs. 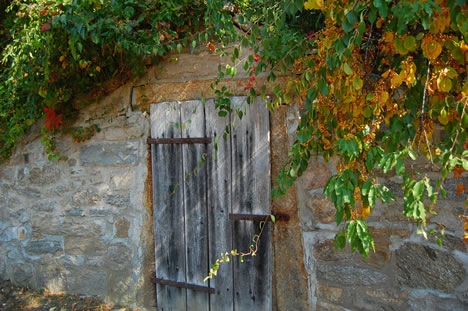 This is an ultra spooky but true tale that happened at Chestnut Hill Baptist Church Cemetery in Rhode Island. Mercy Brown, age 19, died in January of 1892. The winter ground was frozen and a grave could not be dug, so she was kept in this aboveground crypt. When consumption started killing off her family, her brother and others went into the crypt. She appeared to have moved and still looked “fresh.” Believing her a vampire, her brother cut out her heart and burned it against a wall inside the crypt. Then he gave the ashes as a treatment to his sick son. The son soon died. Poor Mercy Brown was later buried in the cemetery with a traditional tombstone. 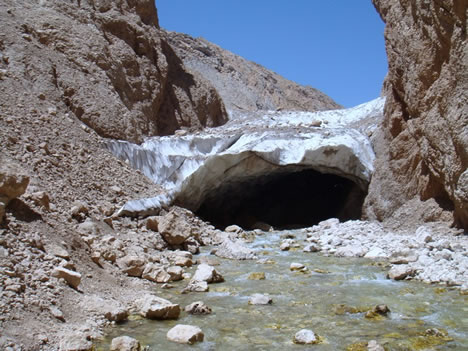 Due to aridity in Iran, due to super hot summers and very cold winters, crypts were carved into the mountain. In archaic times, people lived in them as well as buried their dead in them. This ancient ice crypt is also a tunnel located near Chelgerd City. It took 15 years for about 5 million workers to cut through the mountain at the time of Shah Abbas (1587-1629). This ice crypt tunnel of Koohrang was meant to divert more water to Karoon River. 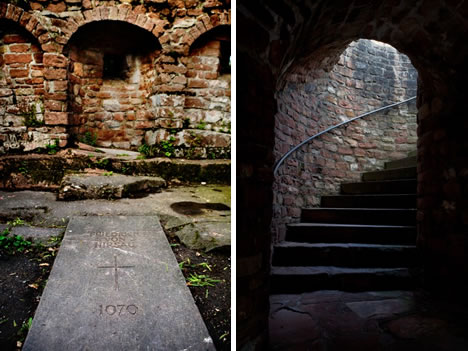 The grounds of the Heidelberg Thingplatz cover 25 meters of sloping land, which is situated atop Heiligenberg (Holy Mountain) Germany. The mountain is full of ancient burial grounds. At the summit was a Roman temple dedicated to the god Mercury. The location of this temple later became the St. Michael Monastery in 1023. Heiligenberg Thingplatz was built in 1934 around these ancient crypts and burial grounds. It was used for Nazi propaganda plays, speeches, and entertainment. Then the radio took over as the more preferred medium for promoting Nazism. 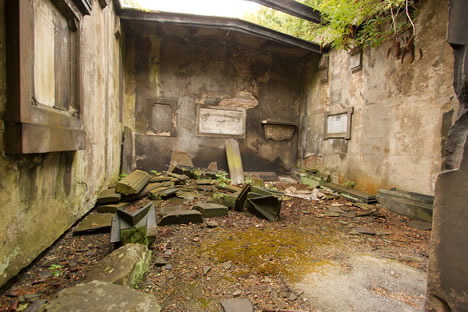 There is really nothing left in which to pay respect inside this decrepit crypt. Nature is slowly reclaiming the burial chamber. Located in Edinburgh, this is only one of three old damaged crypts in St. Cuthbert’s burial grounds. 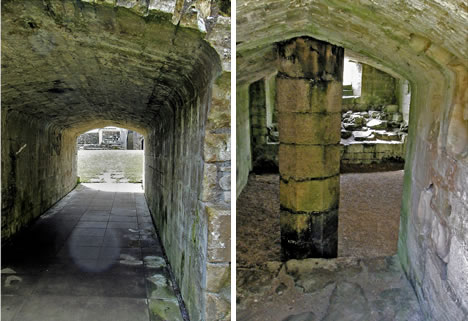 The castle at Warkworth, Northumberland, has a passage under the foundation which leads to the Collegiate Church (as seen at left). On the right is the crumbling remains of a crypt which is hidden away under the church. The church was abandoned and left uncompleted after Henry Percy, 4th Earl of Northumberland, was murdered in 1489. 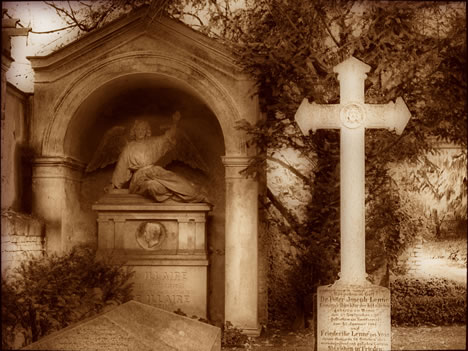 Peter Joseph Lenné was a famous Prussian landscape gardener and architect from Bonn who worked in the German classicist style. Bornstedt Cemetery has remarkable tombstones, mausoleums and crypts. It was a popular burial place of Prussian court employees. Located in Potsdam, Brandenburg, this is the gravesite of Lenné who died in 1866.

You Never Know What Might Be Waiting Inside The Crypt… 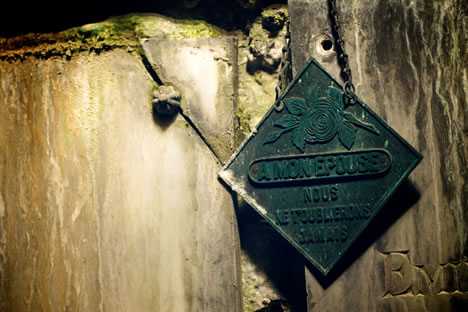 Urban explorers never know what might be waiting on the inside of whatever they are exploring. The same is true of going down and under into abandoned crypts. The sign above reads, “To my wife, we’ll never forget you.” 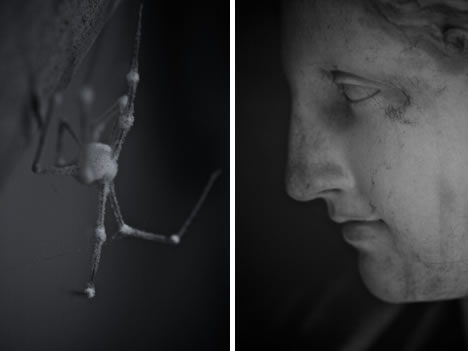 In the same abandoned and derelict crypt, a diseased spider hangs dead on the wall. Nearby, beautiful decay marks the face of an angel statue. 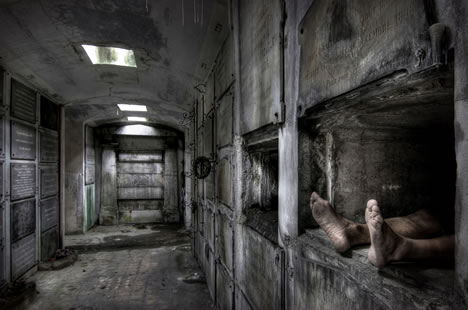 Just in case you don’t find it creepy enough exploring abandoned crypts, this forgotten crypt in Belgium has a ghoulish “new guest.”

Tales From The Crypt 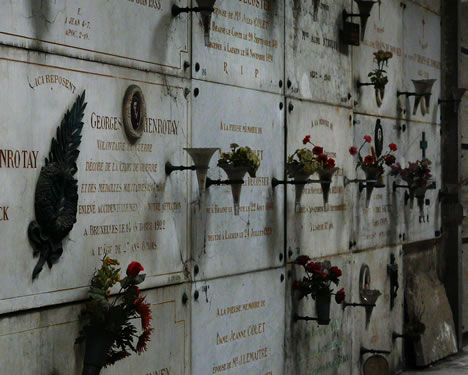 Laeken is a residential suburb in north-west Brussels in Belgium. The neo-gothic Church of Our Lady was initially built as a mausoleum. The church contains a royal crypt where the members of the Belgian Royal Family were buried. The Laeken cemetery behind the church is known as the “Belgian Père Lachaise” because it used to be the burial place of the rich and the famous. Inside the crypt are the graves of famous individuals and also features an original cast of Thinker by Auguste Rodin. 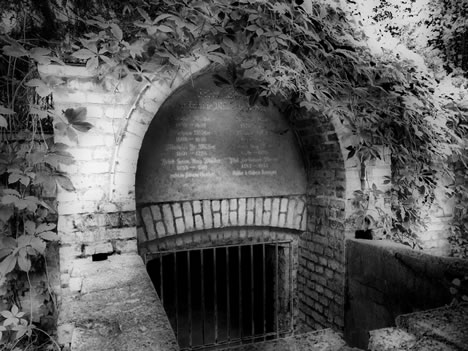 Again at the abandoned Potsdam graveyard in Germany, this grave seems less like an elaborate tombstone and more like a dungeon cell leading to the dead. This is the crypt for the “Müller” family. Nature is moving in to reclaim the decaying crypt. 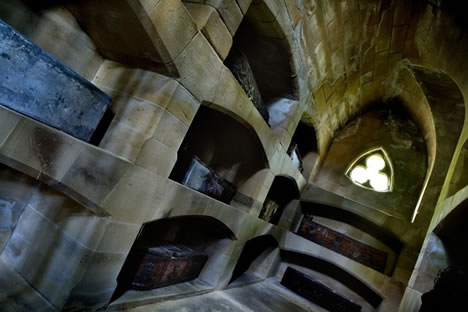 This family crypt is in an England town cemetery, which is very well maintained except for this resting place. Barons from a nearby castle are laid to rest inside, with dates starting in the early 1800’s and ending with urns that were entombed around 1960. 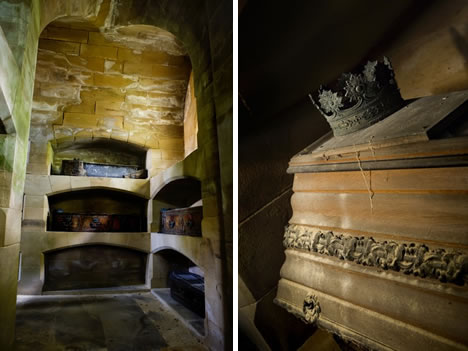 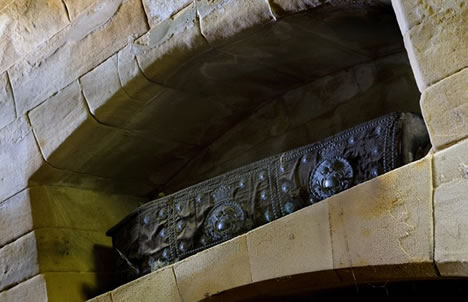 The crypt was laid out in an L-shape. Each casket rests inside a niche with enough room for about 15 bodies. A duke born in the 1700s has a crown and a plague atop his casket. On another duke’s casket, ornate metal crests and shields and jewels glint from the meager light that shines into this cave-like crypt. 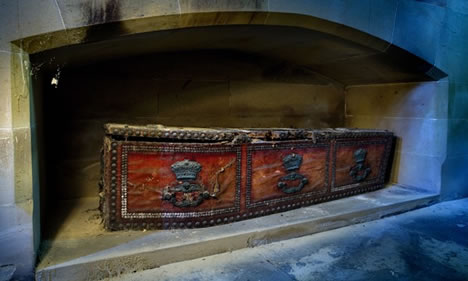 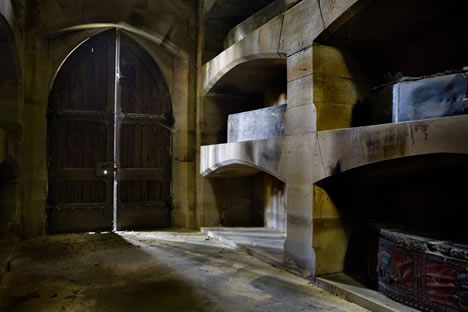 Some of the caskets in Crypt of Barons* are warped with age. Old wooden doors, thick cobwebs and mildewed stones give this crypt an eerie atmosphere like something out of a horror movie. The real name of this crypt is not used, since the doors are unlocked. Urban explorers do not want to mark the way like a map for vandals and grave robbers. 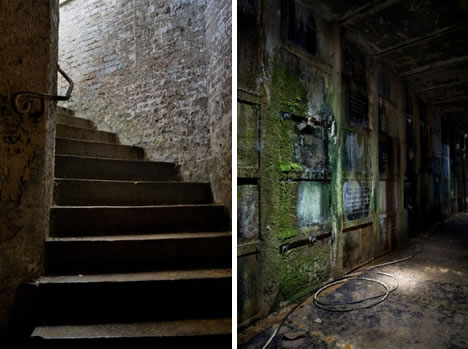 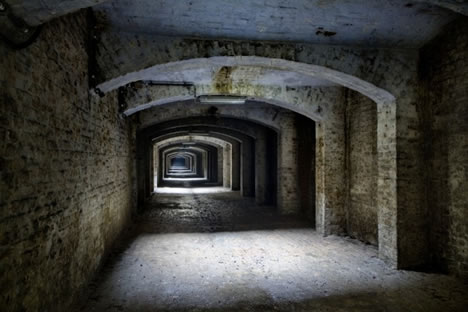 One cemetery in Belgium is very well maintained except for a small chapel-like structure. Inside, a spiral staircase leads down to a dark, dank crypt and gallery of tombs that have not been visited at all for years except by urban explorers. Three tunnels form this crypt, following the cemetery paths aboveground. 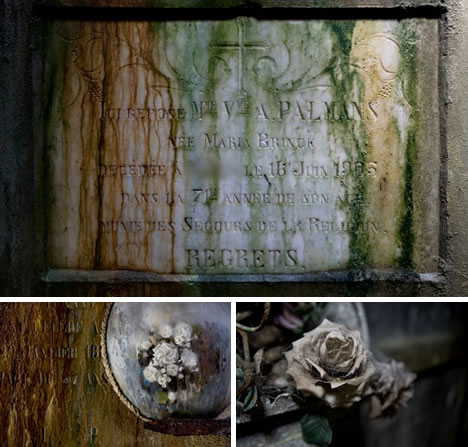 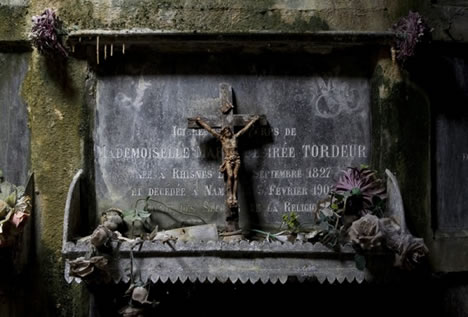 The dates of death range from 1885 to 1978. The walls are damp to the touch. Mementos, plastic flowers and cracked portraits have layers of mildew, moss, rust, and cobwebs. 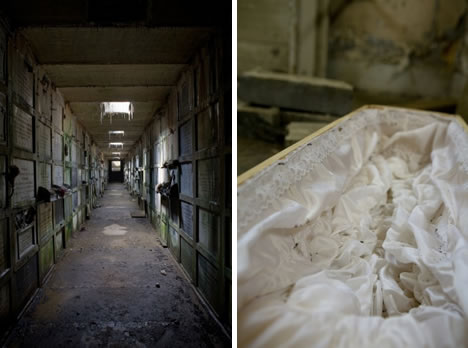 In the early days of this crypt, caskets were constructed of cheap wood. These soon decomposed in this damp underground crypt and created a horrendous stench of liquefied wood and rotting flesh. The city council issued an order that future coffins to be buried in this tomb were required to be zinc based. This was to reduce the putrid stench of decaying bodies which were shelved in the crypt. 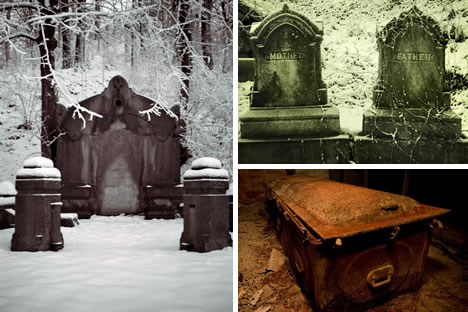 Built in 1837 to alleviate overcrowding in the smaller local cemeteries, Mount Rose Cemetery* helped to provide a more remote location for bodies that were infected with contagious diseases such as smallpox and cholera. There are ornate Victorian crypts, monuments, and mausoleums on the hills of this cemetery. 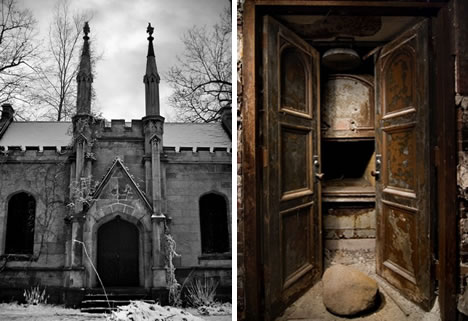 There are also two old abandoned Gothic chapels. The one built in 1863 was a receiving vault. The other chapel added a crematory in 1912. Mount Rose is the final resting place for more than 1/3 of a million people . . . it is also not the cemetery’s real name to protect the innocent and the dead. 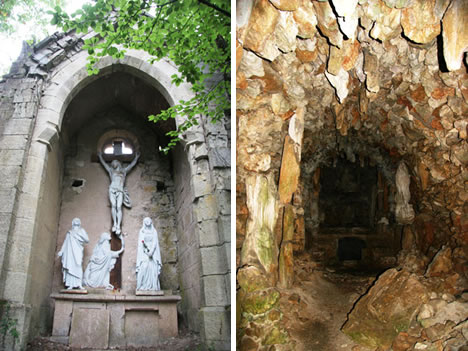 A French priest, Father Louis de Coma, created many great monuments above and below ground in Baulou, France. On the left is the chapel on the hill: The 12th Station of the Cross and the start of the Father de Coma Alignment. Behind the chapel are two ancient tombs. 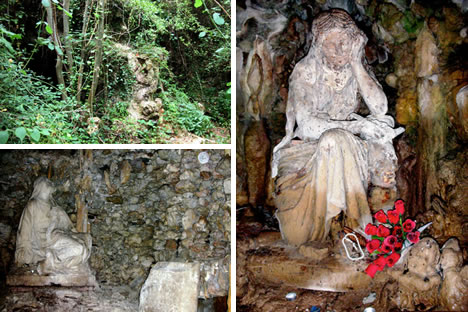 On the upper left a Water Gorgon guards the entrance to the de Coma Family Crypt. On the right is Magdalene crypt, the burial tomb of the De Coma family. Magdalene presides over a pool of water that de Coma believed to possess magical powers. The evocative underground mausoleum is symbolically connected via an alignment that bisects all of the primary religious structures aboveground in Baulou. The Statue of Jesus is turned away from Louis de Coma’s tomb.

Have a safe and happy Memorial Day Weekend! Please consider sparing a few moments in remembrance to those who died fighting for your country. Please pay your respects to your loved ones who have passed away before you.