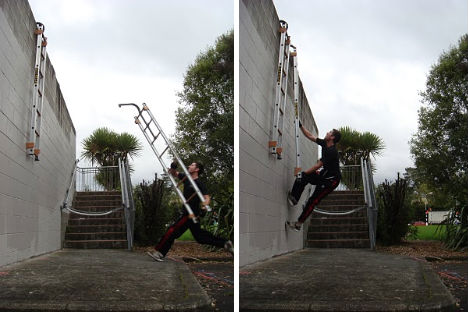 Anyone who’s already familiar with parkour – the jaw-dropping urban sport that involves astonishing acrobatics including gravity-defying jumps – probably stared in disbelief at a video showing a trio of parkour enthusiasts scaling buildings and bridges with the help of hooked ladders. Created as an ad for a sports drink, the video undoubtedly sparked many people to google the dubious new sport of ‘pomparkour’.

So what’s got people up in arms about it? As it turns out, pomparkour is the fictional creation of advertising agency BBDO for ‘V Energy‘, a guarana concoction from New Zealand. And conveniently left out of the video is the fact that these guys are professional stuntmen equipped with safety ropes which were edited out of the final video (check out proof below).

Around the same time the video debuted, a blog about the sport materialized, featuring a few photos and a small amount of info. A Wikipedia article on pomparkour also appeared, but was quickly flagged as a hoax or at the very least, mere self-serving advertisement.

So is it a fictional sport, or just a rad new form of parkour in its infancy? Time will tell whether serious practicers of parkour will embrace this offshoot and pull some ladder play into their movements. Even with safety ropes, the guys in the ad perform some breathtaking stunts, earning quite a bit of well-deserved attention.