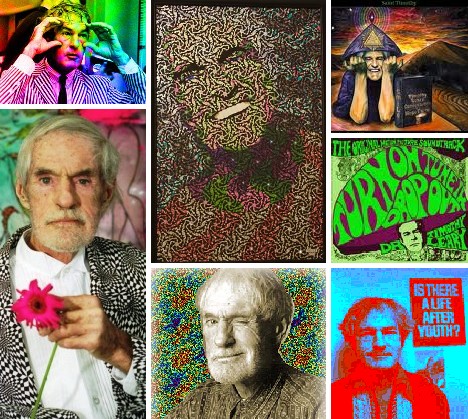 Born on October 22nd, 1920, legendary psychedelic pop culture populist Dr. Timothy Leary would have been 90 years old this year. Leary’s pioneering work on the beneficial effects of psychoactive drugs was swamped by a conservative current of fear and paranoia from above: Richard Nixon famously declared him to be “the most dangerous man in America.” Turn on, tune in, drop out… and check out Timothy Leary in words and art. The doctor is IN! 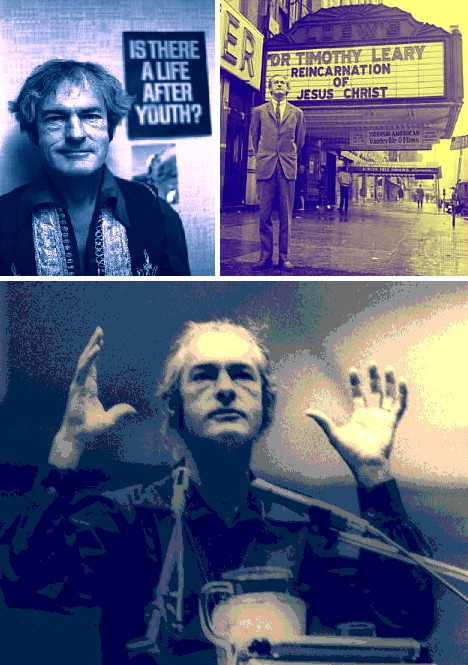 (images via: Thecant, Britannica.com and The Tribune)

Though he famously exhorted America’s youth to drop out, Timothy Francis Leary himself did anything but. Beginning with a stint as a cadet at West Point in 1940, Leary attended a variety of colleges and universities ending in 1950 with his receiving a Ph.D. in psychology from the University of California, Berkeley. 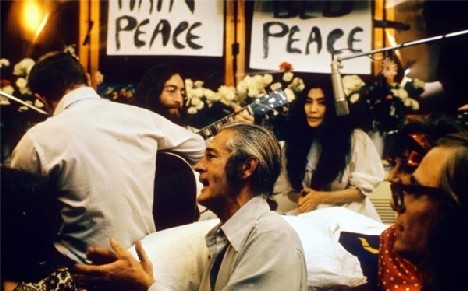 Leary’s education was interrupted by service in World War II, when was a sergeant in the Medical Corps. Not exactly the resume one would expect from a counterculture icon but many facts about Timothy Leary’s life defied easy or logical categorization. On the other hand, Leary was forced to resign from West Point after he was found to have gotten drunk on whiskey and then lied about it, thus breaking the institution’s honor code. Leary later declared that his court-martial was “the only fair trial I’ve had in a court of law”. 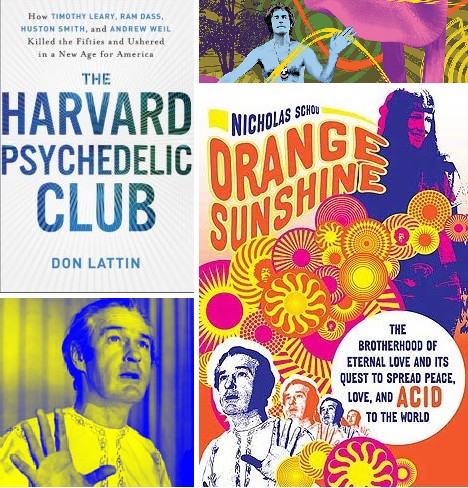 (images via: The Daily Beast and Book Soup)

Post-graduation, Leary’s career rapidly progressed. He was an assistant professor at Berkeley from 1950 to 1955, then moved on to become the director of psychiatric research at the Kaiser Family Foundation until 1958. 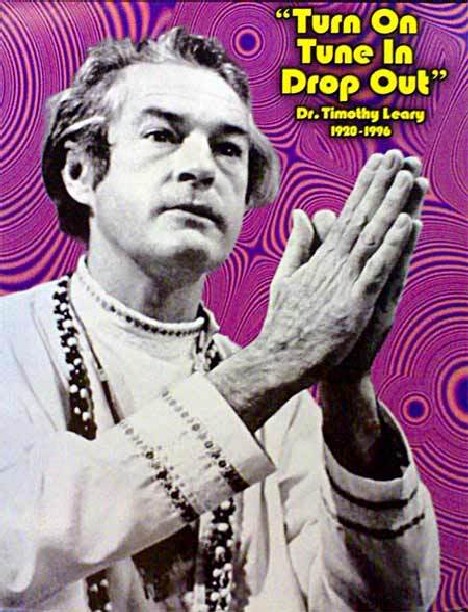 (image via: This Day In Quotes)

Leary finally found his footing in 1959 at Harvard University, where he lectured in psychology and introduced new treatment concepts revolving around the use of psychoactive substances and compounds, many of which were legal in the early 1960s. Leary soon moved from theoretical discussion to the practical use of psychedelic drugs, which resulted in his being fired by Harvard’s management in 1963. 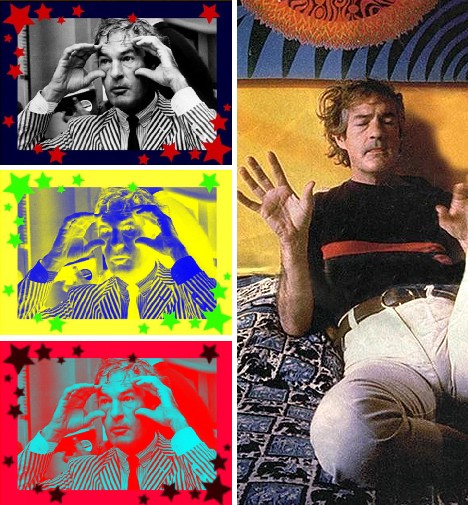 Let’s take a small step back. In the summer of 1960, Leary journeyed to Mexico and tried psilocybin mushrooms for the first time. Leary later remarked that he “learned more about the brain and its possibilities, and more about psychology, in the five hours after taking these mushrooms than in the preceding 15 years of studying and doing research in psychology.” 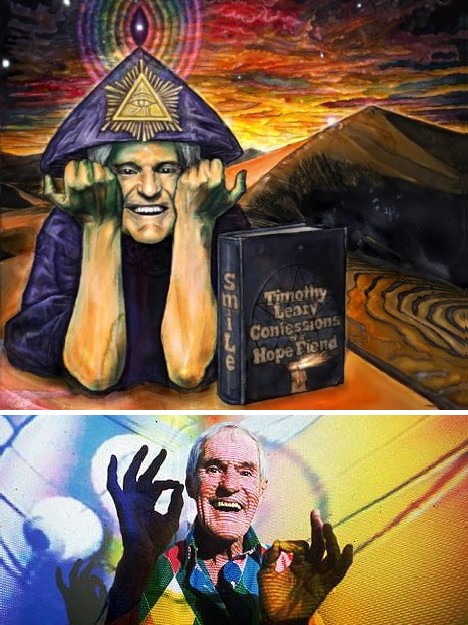 Upon his return from Mexico, Leary initiated the Harvard Psilocybin Project, a research program intended to analyze and document the effects of synthetic psilocybin on human subjects who ranged from prisoners to seminary students. The most tantalizing results came from The Concord Prison Experiment, which monitored the progress of prisoners treated with psychoactive drugs once they were released back into society. 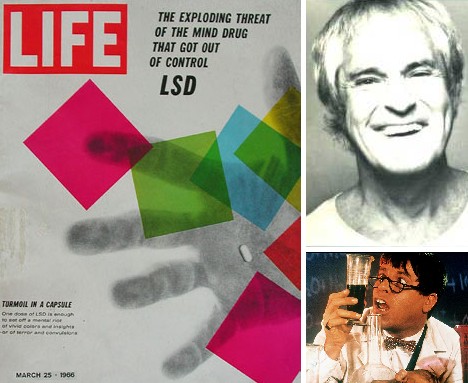 (images via: Lysergia and Technoccult)

Leary’s subjects received a combination of drug therapy directly supervised by Leary combined with social support modeled after the system used by Alcoholics Anonymous. At that time, the rate of recidivism (return to a criminal lifestyle) among U.S. prisoners was 60 percent. Prisoners who underwent Leary’s therapy recorded a much lower recidivism rate of just 20 percent, declaring that they had received a new understanding of their purpose in life. 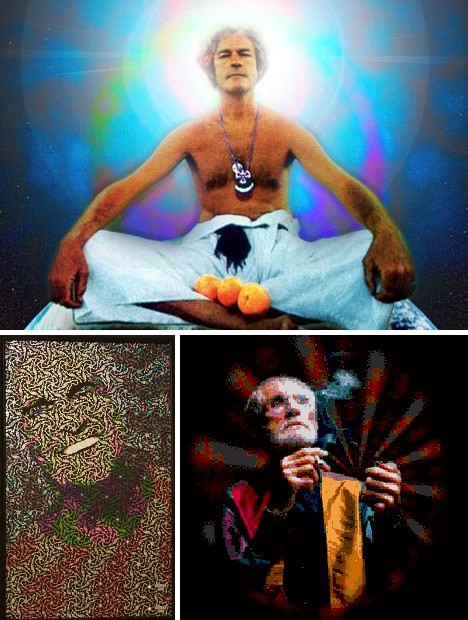 (images via: Crucify The Ego, Home in the Holler and Wilson’s Almanac)

One can well imagine how society would have benefited if Leary’s therapy had been instituted as a standard treatment, but alas it was not to be. In 1963 the FDA and DEA began severely restricting the medical and scientific use of psychoactive drugs, regardless of their perceived benefits, and within 5 years possession of even small amounts of psychoactive drugs could (and did) result in the accused doing substantial prison time. 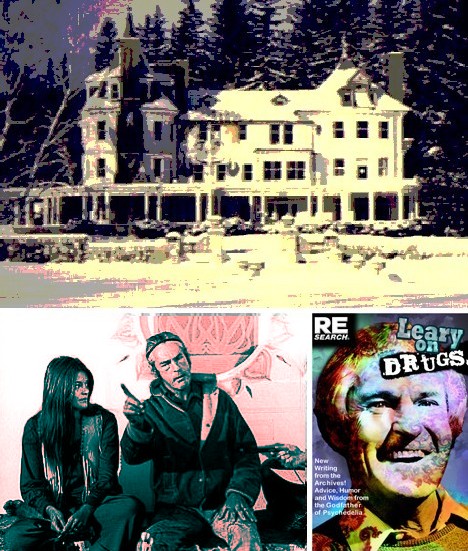 Booted out of Harvard and deprived of both salary and funding, Leary and his associates were given the use of a mansion in Millbrook, New York, by several heirs to the wealthy Mellon family who encouraged Leary to continue his experiments. “We saw ourselves as anthropologists from the twenty-first century inhabiting a time module set somewhere in the dark ages of the 1960s,” said Leary on the Millbrook years. “On this space colony we were attempting to create a new paganism and a new dedication to life as art.” 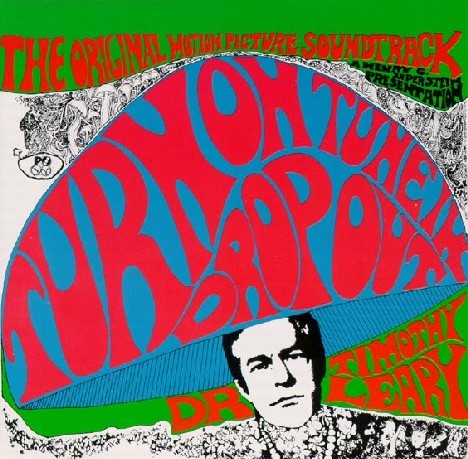 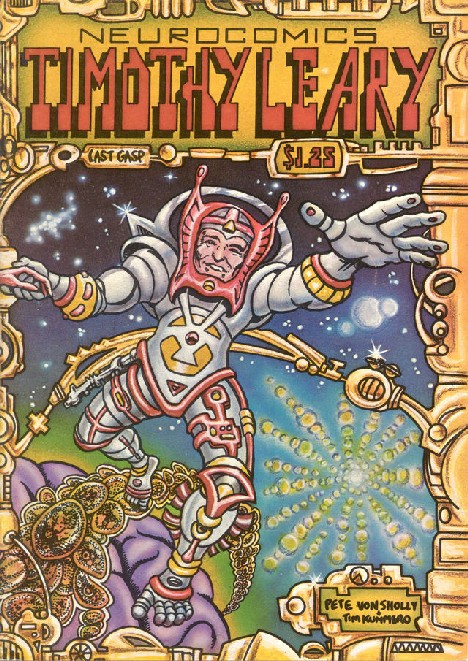 (images via: Step Off and Bruce Eisner’s Vision Thing)

The Millbrook mansion was continually raided by various law enforcement agencies including the local police under the impetus of district attorney G. Gordon Liddy, who later rose to prominence in the Watergate Scandal. A series of raids, arrests and drug busts in the late 1960s saw Leary sentenced to decades in prison – often reduced or thrown out on appeal as Leary and his lawyers would prove several of the laws used to convict him were unconstitutional.

The early 1970s saw Leary in exile after escaping from a forestry and gardening detail at a lower security prison. He spent time in Algeria, Switzerland, Austria, Lebanon and Afghanistan before being arrested and flown back to the United States. “If he is allowed to travel freely, he will speak publicly and spread his ideas,” remarked the judge at Leary’s remand hearing. Sentenced to 95 years, Leary ended up in California’s Folsom Prison – at one point he was locked in the cell next to mass murderer Charles Manson. 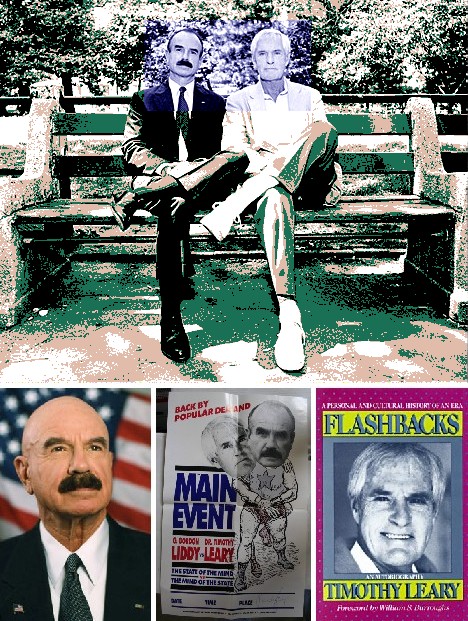 In 1976, Leary was released by California Governor Jerry Brown – the same Jerry Brown now running for governor – and in 1982 began a lecture tour with former nemesis (and ex-con) G. Gordon Liddy. The tour was hugely successful and helped bring both Leary and Liddy back into the public eye. The renewed publicity also boosted sales of Leary’s autobiography, Flashbacks. 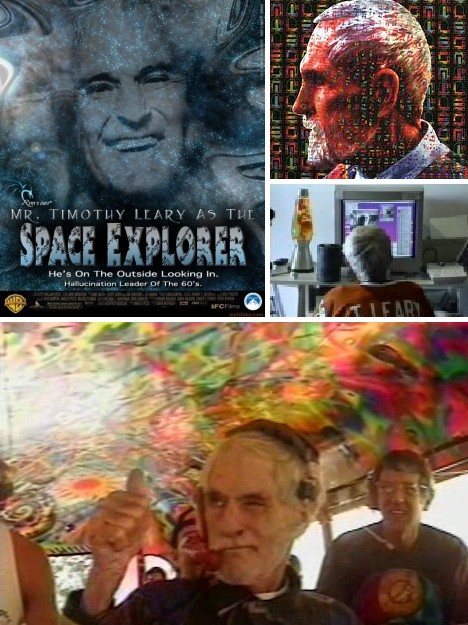 Never a one-trick pony, Timothy Leary refused to be pigeonholed by his reputation. By the 1980s he had embraced the thought of space colonization while rejecting ecologists who, Leary said, were content to remain “in the fouled nest”. He also remained a fervent proponent of recreational drug use though he was firmly against drug abuse. One of favorite snacks was a marijuana bud covered with melted cheese on a cracker. 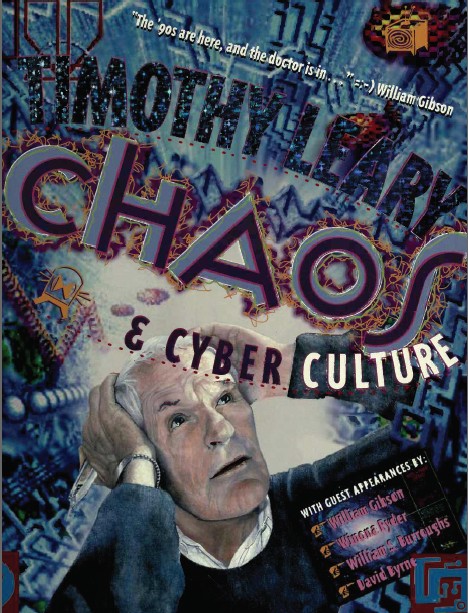 Leary was an early exponent of virtual reality, cyberculture and the Internet, describing the latter as “the LSD of the 1990s” and he set up one of the very first websites – which is still online. He also maintained his strong interest in space exploration and was thrilled by the prospect of having his ashes shot into space. When told that the capsule containing his ashes would eventually fall from orbit and burn up in the atmosphere, Leary was enthusiastic: “Finally, I’ll be a space pioneer, and everyone will know: That will be me. I will be the light.” 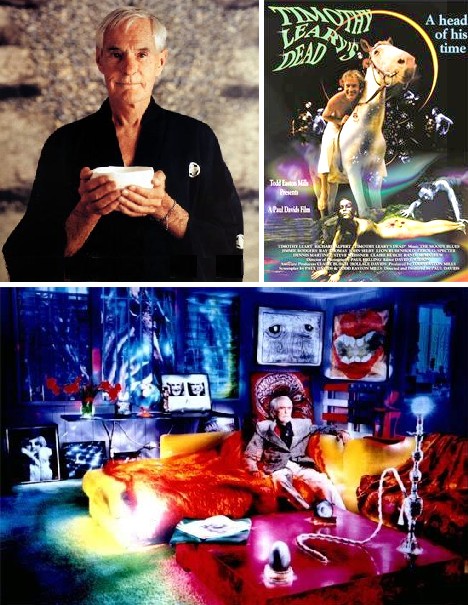 In early 1995, Leary was diagnosed with inoperable prostate cancer. Not surprisingly, he embraced his looming death as an experience to be explored and shared. In his remaining months, weeks and days, Leary met with thousands of well-wishers, gave interviews, and renewed old friendships. 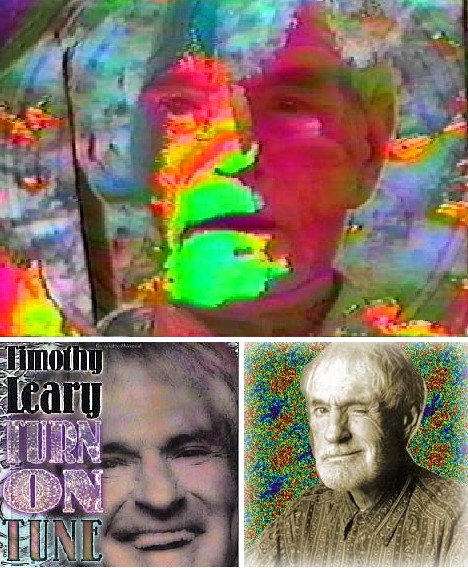 (images via: Audiovisualizers, Travelpod and Metroactive)

Some of the best known photographs and images of Leary come from this time of his life, as if the great counterculture guru had decided that life was more about giving than taking. Even as the cancer spread, diminishing his quality of life and causing him to lose weight, Leary remained open to those who sought his guidance or at least, his famously mischievous smile. The black & white photo below was taken by Michael Maloney in San Francisco, where Leary had come to promote an exhibition of LSD blotter paper art 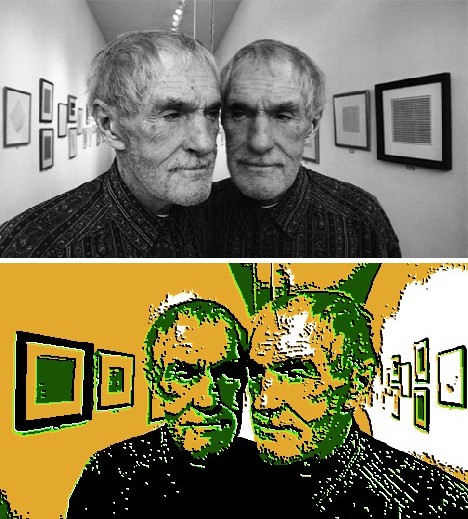 Leary’s final journey (or at least, the prelude to it) was made into the 1996 documentary film Timothy Leary’s Dead. On May 31st, 1996, as the end quickly approached, Leary arranged for his dying moments to be videotaped for posterity and according to bedside witnesses, his last words were “Beautiful… Beautiful… Why? Why? Why? Why not?!l” 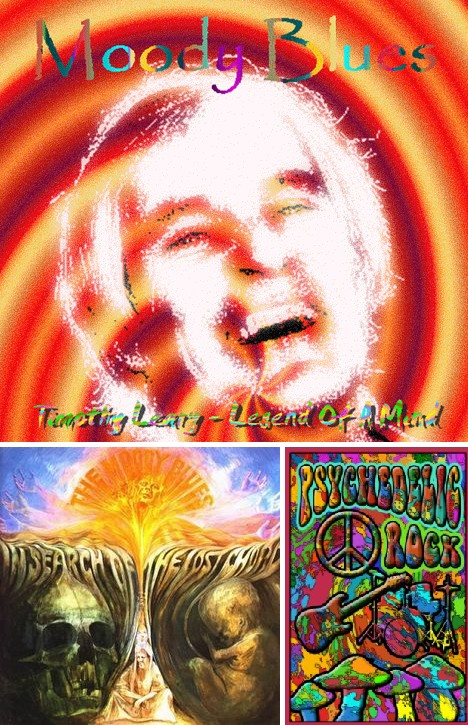 “Timothy Leary’s dead. No, no no no, he’s outside, looking in.” Leary was said to have liked “Legend Of A Mind”, the first song recorded for the Moody Blues’ 1968 album In Search Of The Lost Chord. Released at the height of sixties psychedelia, the song endures as a homage to the man who some say was never born, never died, just visited our planet for a while. We sure could use another visit right about now, wouldn’t you agree? Happy Birthday, good doctor!