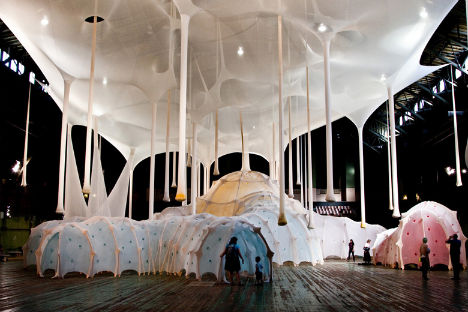 They’re vaguely anatomical, looking like microscopic views of cells, bacteria or organs. Some resemble giant udders, while others are big soft organically shaped cushions that hold you like a womb. No doubt about it, Ernesto Neto’s ‘Anthropodino’ installation at the Park Avenue Armory was a tad unusual; C-Monster called it “mom’s pantyhose gone fantastically amoebic”. 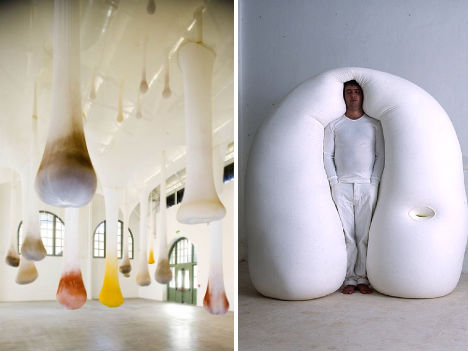 Stretched around a skeletal wood frame is what seems like acres of mesh fabric, suspended from the ceiling by nothing but weights and counter-weights, and filled with spices like citrus and cloves. The theme here is ‘comfort’, and visitors making their way through the bewildering maze are tempted – no, beckoned – to lay down on squishy surfaces and relax for a while. 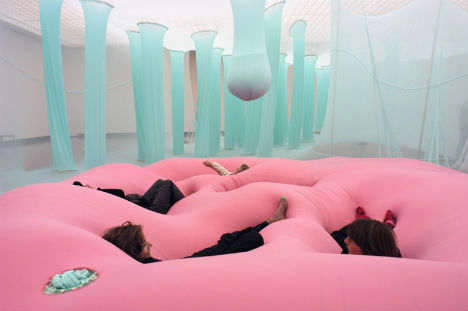 “The whole anthropodino idea considers the human being in a scientific way, not only as an individual or as a part of society, but in the sense of an organ,” Neto told Art in America Magazine. “In society, the human being must be an organ or cell. So this is a cell. The drawing of this piece depicts a cellular structure — mytochondria with ribosomes and membranes. This piece acts as a center of energy for the people who move around it.” 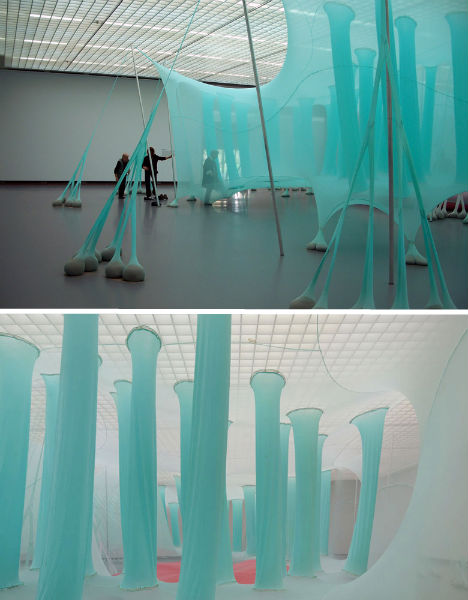 “I assume the position of anthropologist as a human being. I am interested in the animal that exists in us — the monster, the dinosaur, the imaginary. It’s weird because the dinosaurs did exist — archeologists dig up their bones to prove it — but there is still something imaginary about them because we’ve never seen them. I was thinking of imaginary animals when I chose this title, and about this image of the bones. These structural joints that hold the piece look like bones. They hold the piece up. “

‘Anthropodino’ inhabited most of the 55,000-square-foot Wade Thompson Drill Hall for several months in summer 2009 and sadly is no more, but you can see lots of photos on Flickr.