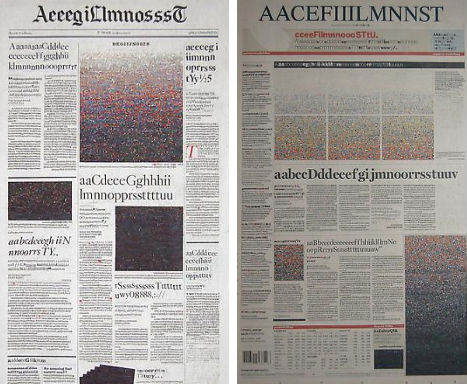 Bent over a copy of The Guardian with an X-acto knife, London-based artist Kim Rugg carefully cuts out individual letters from the front page and places them on a cutting mat beside her. Then – in a process that can take up to five months – Rugg reconstructs the page the way she thinks it should be: still in its original layout, but alphabetized. She even rearranges the pixels of the images in gradients. The resulting work no longer carries any meaning in the text, but focuses our attention sharply on the graphic design: the fonts used, the margins between paragraphs, the size of the headlines. 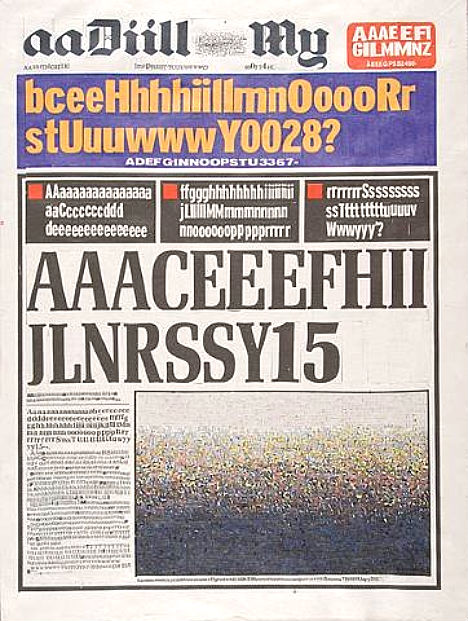 Rugg works relentlessly at her task, spending seven days a week cutting and pasting. The preciseness of the work and her dogged devotion inevitably conjure questions about obsessive compulsive disorder. But to Rugg – and fans of her art – the association is as meaningless as jumbled letters on a page. “Some people like taking their time,” shrugs the artist in a Cool Hunting video that takes us into her studio.

In the video, Rugg gives us a peek at her process and “In my opinion, the only paper that still looks really nice,” she adds. “I will recreate this page, but only using the A’s. Each A will be placed in its place on the page. So the final piece will be just a white piece of paper with a scattering of A’s. And then the same thing on another piece of paper with all the B’s, all the C’s.” Rugg shows us the remaining front page of the New York Times, dotted with little voids where the chosen letters were removed. 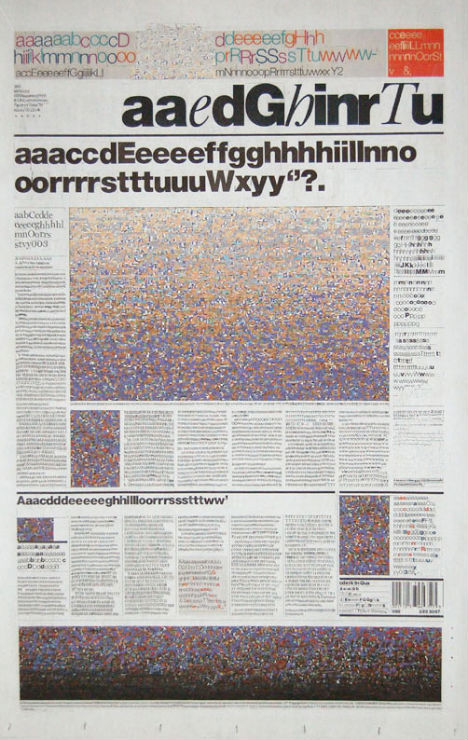 Newspapers aren’t the only media to get rearranged in what Rugg considers to be a more beautiful visual configuration. She also likes working with stamps, which she either stretches out to a more pleasing (to her eye) visual format or turns into a collage of pixels, laid out in patterns like waves. Cereal boxes and comic books, too, get recreated through a curious series of steps: taking a photo of the object, and recreating the photo with real copies of the object. “It’s an image made out of the object that’s an object made out of the image.”