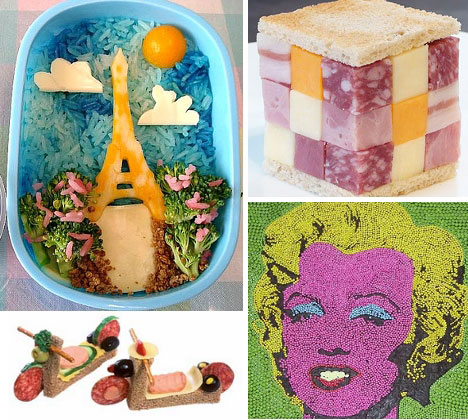 As humans, food is any substance we consume for nutrition or even pleasure. It’s diversified across cultures through varying methods of cooking, preparation, and ingredients. But what if food was used as a medium for art? Here are 32 incredible examples of creative food design, food sculpture, and edible art.

Make Me a Sandwich. 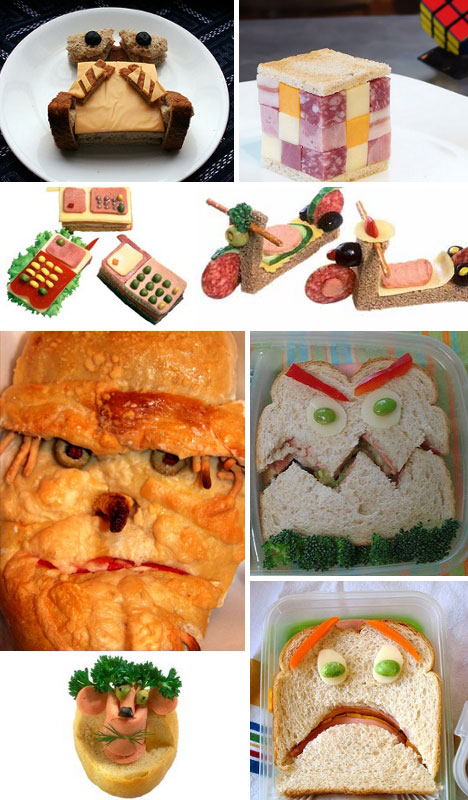 Bread has been consumed with other foods since Neolithic times, and the sandwich has evolved dramatically throughout different regions of the world. Starting at the top left is a sandwich in the shape of Wall-E, from the popular Disney Pixar movie of the same name. Remember the Rubix cube? This sandwich is constructed into the form of the famous puzzle with toast, ham, cheese, and salami cubes. Below that, little cell phone and Vespa sandwiches; not sure how well they function really, but I’d be happy to have yours. A little girl crafted the large sandwich in the middle to be a Witch, which is clever, but I’m seeing Chewbacca. Sandwiches with an attitude are all the rage, seen on the right mid and bottom, created with just a simple variation in how they’re cut! On the bottom left, this little mouse was created simply with parsley, a hot dog and edamame. 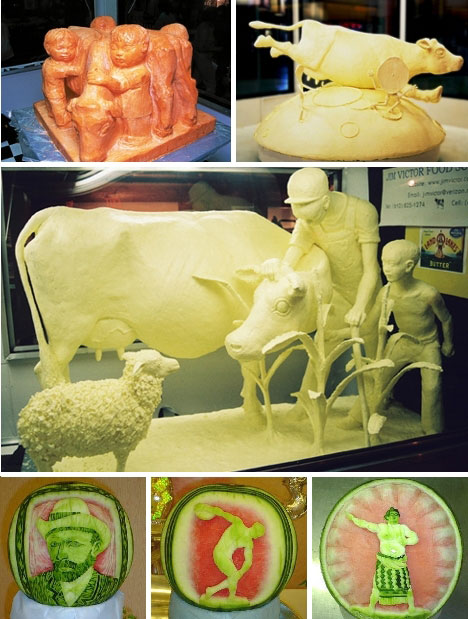 Heading farther away from the usual edible fare, we find some pretty amazing food sculptures. Up in the top left is a cheddar cheese likeness of two little boys with a cow, and to the right is a recreation, in butter, of the children’s rhyme “Hey Diddle Diddle”; they’re both very large in person. In the middle is a butter sculpture of a farm scene featured at a county fair. The three sculptures at the bottom are carved from watermelons, and are more popular in China than carving pumpkins! There are many in the collection, but depicted here are Van Gough, The Discobolus of Myron and a Sumo Wrestler. 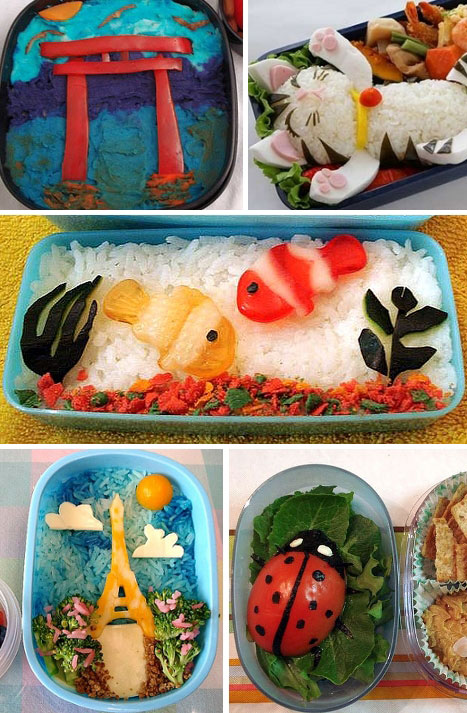 Remember those brown paper-bag lunches your mom used to send to school with you? Well, Bento is Japan’s answer to that. A single-portion home-packed meal, Bento often consists of rice, fish, or meat, a side, and can be decorated in some pretty creative ways. The beautiful Bento at top left is actually made with red bell pepper and mashed potatoes mixed with food dye, creating a dreamy, oil-painted look. The kitten Bento is just too cute to leave out, it was created simply with rice and seaweed accents. Finding Nemo comes to mind when viewing the middle Bento box, created with the traditional ingredients of rice and seaweed, as well as the non- with Fruity Pebbles for the gravel. Looking at the ladybug, one would have to look twice to see that it’s really a halved tomato with cheese, on a bed of greens. The Eiffel Tower Bento is lovely, formed with sliced cheese, food dye on the rice, grape nuts for the gravel and vegetables for the bushes. Could you bring yourself to eat these? 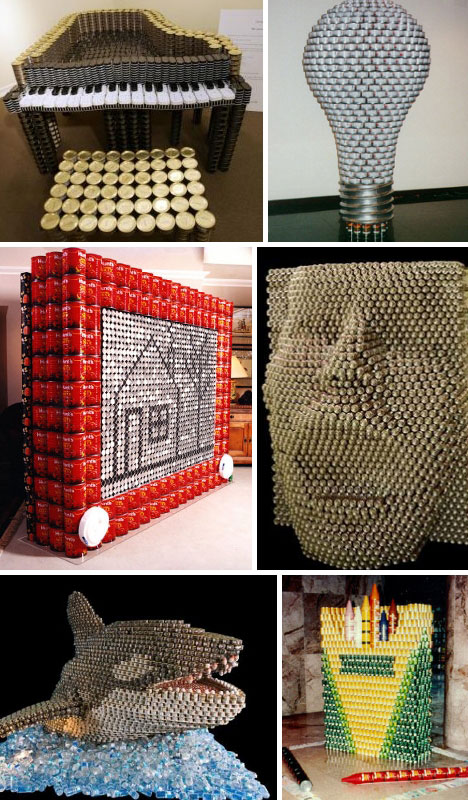 At first glance these don’t look like food, but upon closer inspection you’ll see that these sculptures are made of canned food! With the creative eye of teams of architects, engineers and students, the structures take 8-12 weeks and thousands of cans to craft. Canstruction is actually a contest in which teams build these exceptional sculptures entirely out of canned food. At the close of the contest and exhibitions, all of the cans used are donated to local food banks, and are further distributed to shelters, pantries, soup kitchens, day care centers, and the elderly. This has been going on for years, and in sifting through the gallery, the Grand Piano, light bulb, Etch-A-Sketch, Orca Whale and Crayon Box evoled as my favorites. The face is reminiscent of a Pinhead Toy, and the effect is unforgettable. An original food art concept with a great cause! 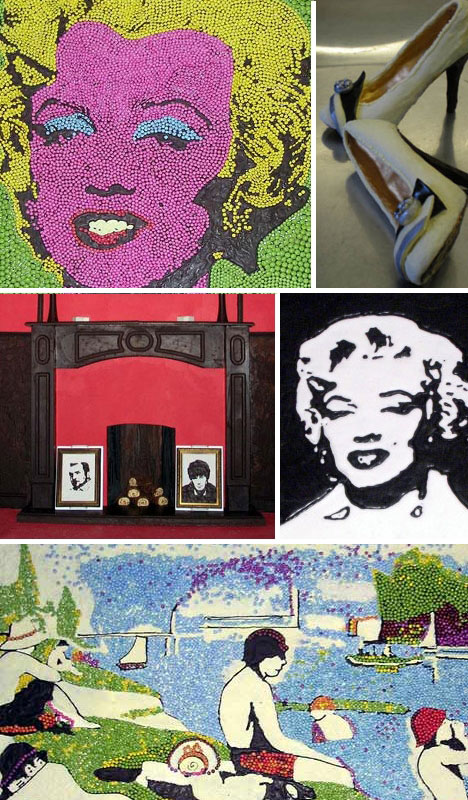 (images via Food is Art)

Here we see that chocolate comes not only in dark, milk and white, but paintings, furniture and shoes as well! To celebrate the re-release of Smarties chocolate candies in the UK, they created an amazing gallery of Smarties art. Top left is a Warhol reproduction of Marilyn Monroe, while at bottom we have an exquisite rendition of Seurat’s “Bathers”. Marilyn Monroe seems to be a common theme; she’s painted in a chocolate portrait at mid right as well. Food artist Prudence Emma Staite created all of these masterpieces, including the life-sized shoes at top right. She even takes custom orders on her website, and can recreate any style of shoe. I wouldn’t recommend sporting them though. The piece de resistance would have to be the room of chocolate furniture. Staite also takes orders for these complete chocolate rooms, inspired by the children’s take of Hansel and Gretel, and they can feed over 500 people. How about that for form meeting function? 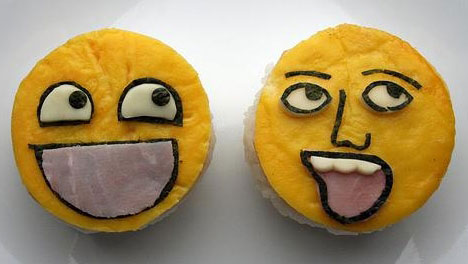 So apparently food comes Internet-Meme style now. These tasty treats recreate the famous Awesome Smiley, and are made of rice, egg, seaweed, cheese and ham. My favorite food art by far is cooked up through the creative minds at PES. The video below is a fascinating stop motion short entitled “Game Over” (mimicking arcade games like Pac Man and Frogger) and making very good use of food like pizza, muffins, pretzels, and eggs.

Food satisfies the body and soul, it’s one of the few common threads among all the world’s cultures. As you can see from the many inventive displays here though, it seems that some of us never really learn to stop playing with our food.