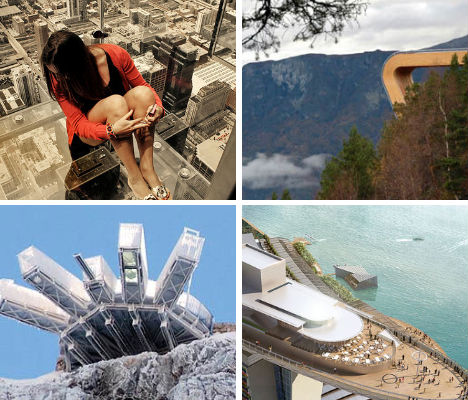 Your head spins, your stomach clenches, your heart pounds furiously. You’re thousands of feet above the ground with nothing but glass keeping you from teetering over the edge in a lengthy and final fall. Do you have the guts to look down? Hundreds of feet in the air, these 13 tower platforms and observation decks – often with transparent floors – offer absolutely breathtaking views of cities like Shanghai and landscape features like the Grand Canyon. 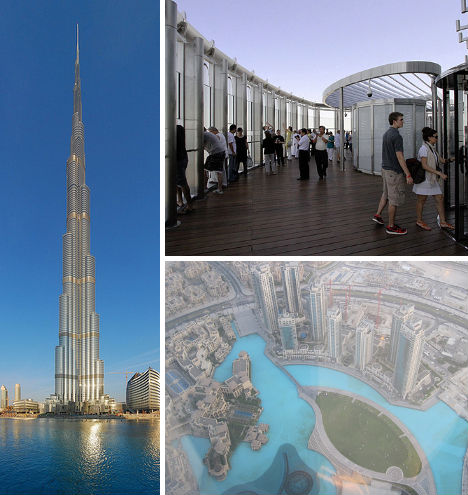 You’re never going to get a higher vantage point from a free-standing structure than that attainable at the Burj Khalifa observation deck in Dubai. Unless, that is, somebody builds a structure even taller than this world-record tower, which reaches half a mile into the air. The observation deck is on the 124th floor of the Burj Khalifa (formerly known as the Burj Dubai) and on a clear day, it provides absolutely jaw-dropping views of practically the whole of the United Arab Emirates.

Stockholm SkyView at the Ericcson Globe 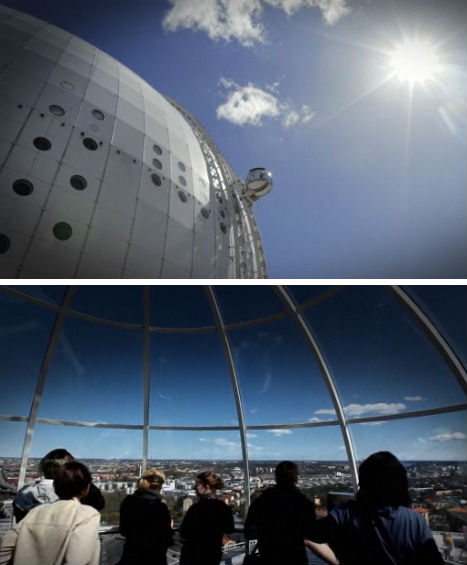 You’ll literally feel on top of the globe when you hitch a ride in one of the glass ‘gondolas’ at Stockholm Skyview, a moving observation deck that travels up two sets of rails on the exterior of the Ericcson Globe Arena in Sweden. Each gondola can take 16 people over 426 feet into the air for an unforgettable view of the city of Stockholm. 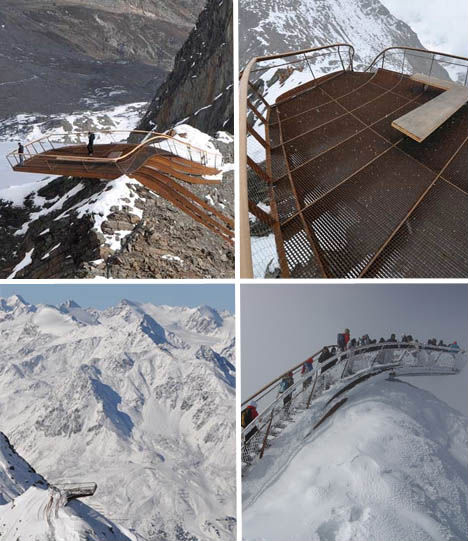 Virtually invisible against the snow in the winter, ‘Top of Tyrol’ was designed to blend seamlessly into its environment and provide a vantage point that most people couldn’t achieve without some serious mountain climbing abilities. Designed by Aste Architecture, Top of Tyrol cantilevers nearly 30 feet out from the pinnacle of Austria’s Mount Isidor, about 10,500 feet above the ground. 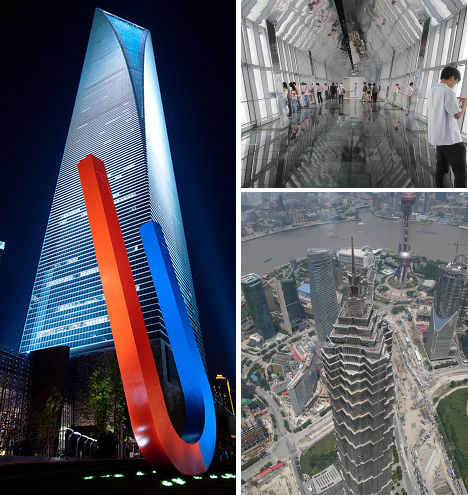 Before the Burj Khalifa came along and shattered all kinds of records, the observation deck at the Shanghai World Financial Center was about as high as it got. The glass observation corridor, which spans the summit of the building, is half a kilometer in the air – but the faint(ish) of heart can still get a thrill by checking out lower decks on the 94th and 97th floors instead. 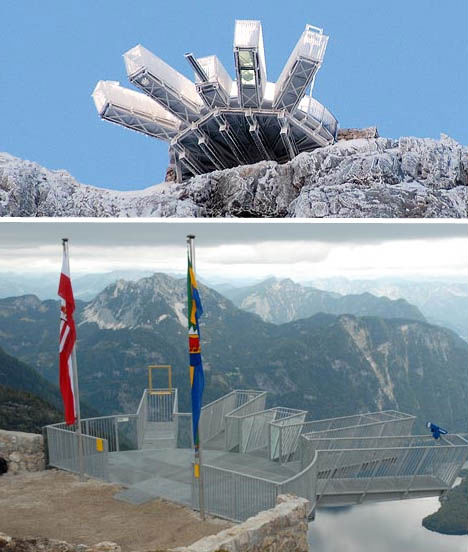 Get five different views with five different features in each jetty of ‘Five Fingers’, a viewing platform in the Austrian Alps. The first has a picture frame for souvenir shots, the second a glass floor for that vertiginous feeling, the third a trampoline for the foolhardy (this one is only open for special events, lest tourists bounce themselves right over the cliff), the fourth a hole in the floor to peek through and the fifth, a telescope. 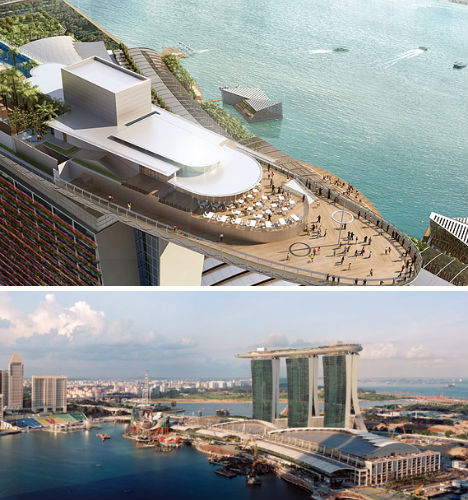 On the top of three skyscrapers, 656 feet in the air, Singapore boasts a 1,246-foot-long rooftop deck by architect Moshe Safdie offering an incredible view of Marina Bay. The curving Sands Skypark is shaped like a ship and equivalent in size to the Eiffel Tower laid on its side. Among its most notable features is a 150-meter-long infinity swimming pool, which makes guests feel like they could swim right over the edge. 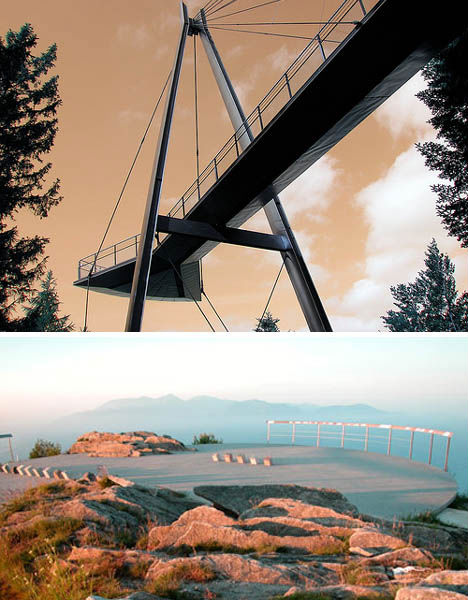 Designed by Paolo Burgi, Landscape Promontory is a suspended metal platform that almost looks like an insanely oversized, modern version of a carnival ride – except that it (thankfully) doesn’t move. The viewing platform extends out from Cardada mountain in Switzerland and is marked with symbols and explanations that tell of local history and literature. 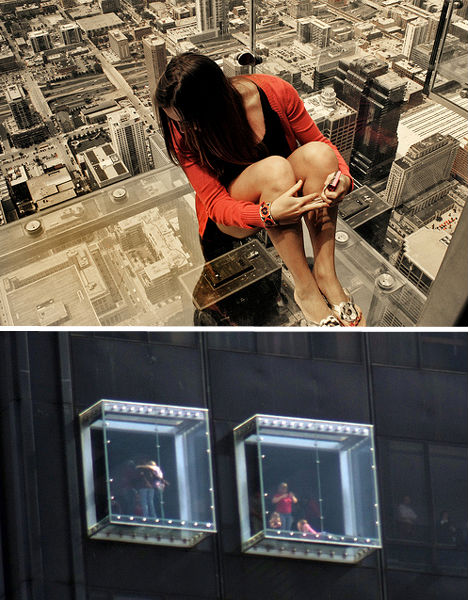 Step out onto the deck of the Willis (formerly Sears) Tower ‘Skydeck’ – an enclosed balcony made almost entirely of glass – and you’ll feel, for a moment, as if you’re about to hurtle to a rather unpleasant death on the streets below. Or perhaps, if you’re the brave type, the height won’t phase you at all and you’ll just be completely entranced by an unparalleled, uninterrupted view of the Chicago skyline. 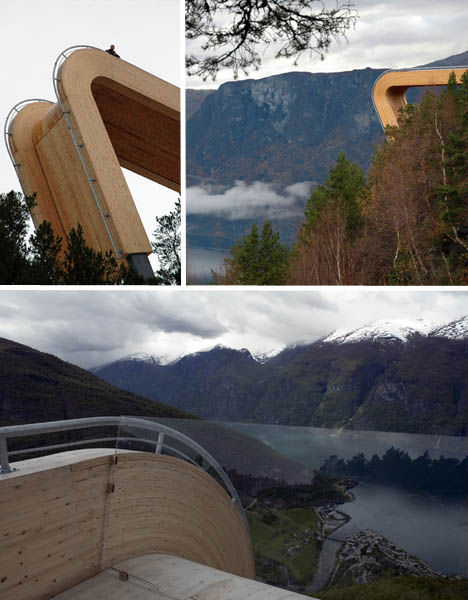 You know that stomach-clutching, heart-in-your-throat sensation you get on roller coasters just as you’re coming up to the edge of a terrifyingly steep drop? That moment is drawn out indefinitely at the Aurland Lookout in Norway, a stunning wooden overlook that puts nothing but a sheet of plate glass between you and the countryside below. Designed by Todd Saunders & Tommie Wilhelmsen, the minimalist structure celebrates the region’s natural beauty and exemplifies its spare, modern design sense. 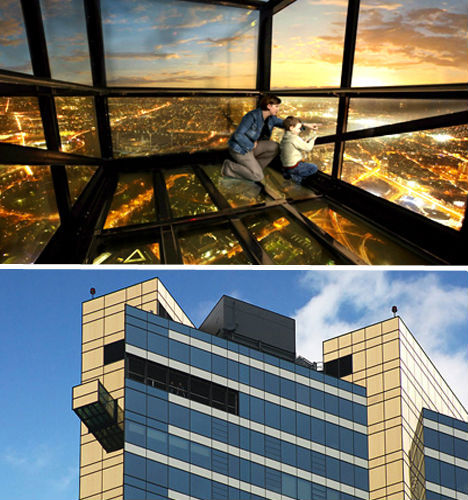 They named this thing ‘Eureka’ for a reason – it’s about the tamest exclamation that would emerge from your mouth as you walk out onto it. As you look down through the glass floor, you become acutely aware of the fact that you’re nearly 1,000 feet above street level. Jutting 9 feet out the side of the building, the Skydeck offers the highest public vantage point in a building in the Southern Hemisphere. 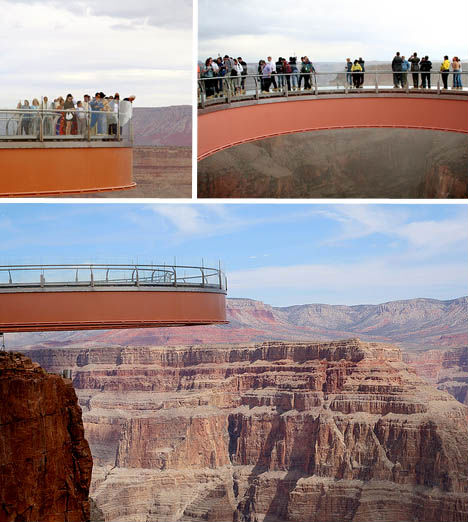 Stepping out onto the Grand Canyon Skywalk is probably the closest you’ll ever get to walking on air. The U-shaped walkway, considered quite a feat of engineering (or an over-developed eyesore, depending on your viewpoint), extends 66 feet from the canyon’s edge and its two-inch-thick glass floor lets you gaze down 3,600 feet to the canyon floor below. 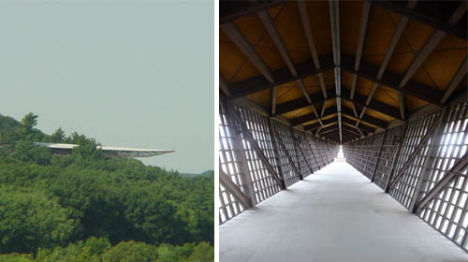 As you emerge from the cluttered depths of one of America’s most bizarre roadside attractions, The House on the Rock, you can clear your head on a cantilevered viewing platform that extends 218 feet over the forest floor. Once you reach the end of the ‘Infinity Room’, which has 3,264 windows, you can look out the final pane of glass, which is set into the floor at the tip. 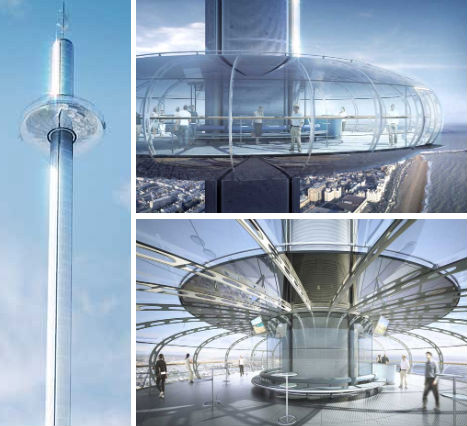 England’s Brighton Beach will get a 600-foot needle tower with a circular glass viewing platform that can hold 125 people, following years of delays. The i360 Tower – which might get a name change by the time it’s complete – is set to become Britain’s highest observation tower, granting 360-degree views of the coast.