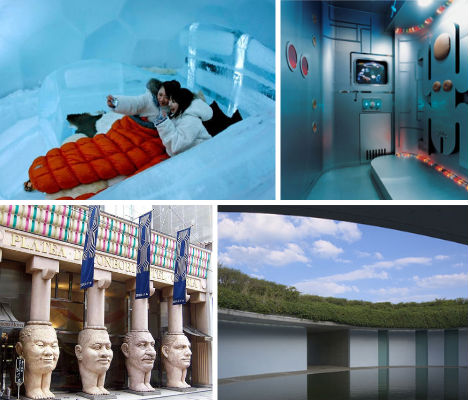 In Japan, thousands of years of traditional culture collide with the almost futuristically modern vibe of larger cities like Tokyo to present a traveler’s dream of varied experience. That fusion is echoed in the nation’s many hotels, which range from serene ryokans, or traditional inns, to unabashedly out-there ‘love hotels’ with amazing themed rooms (got an alien abduction fantasy? You’re in luck.) 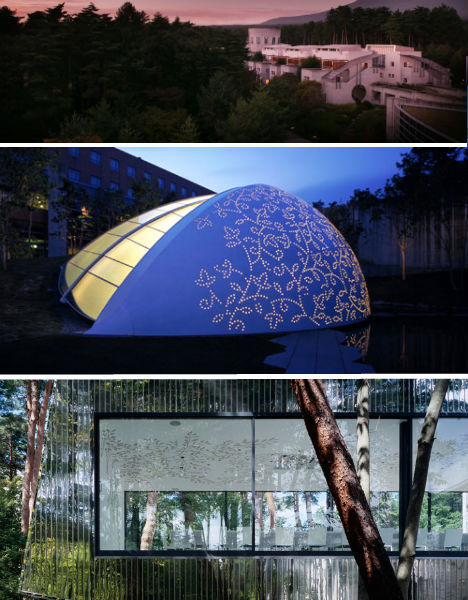 Designed by Italian architect Mario Bello in the 1980s, ‘Risonare’ is a peaceful getaway in the Japanese Alps at the foot of Mount Yatsugatake. It’s a modern interpretation of medieval walled cities in Italy, and is managed sustainably with eco-tourism in mind. The complex includes a stunning oval ‘Leaf Chapel’, and a reflective dining and party space referred to as ‘Brillare’, both by Klein Dytham Architects, making this resort a popular choice for weddings and other special events. 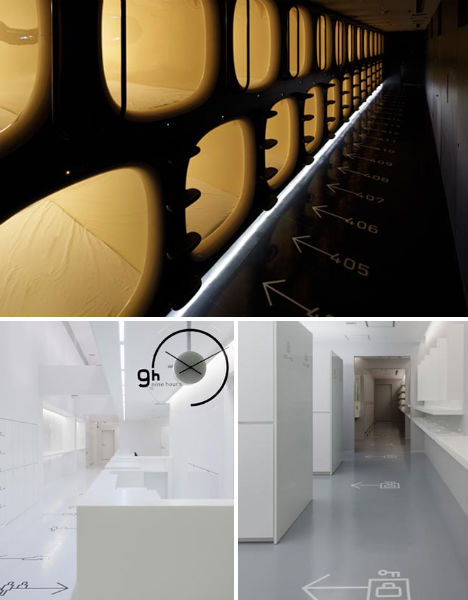 Capsule hotels – where your ‘room’ is literally a hole in the wall, resembling a corpse drawer in a morgue – can be found all over Japan. And while you could certainly stay among the snoring salarymen, you might have more fun at the 9 Hours Capsule Hotel, a modern version of these low-cost no-frills beds-for-rent. With a minimalist, nearly all-white aesthetic and some unexpected perks like ‘digital entertainment options’, 9h is a fun way to experience Japan on a budget. 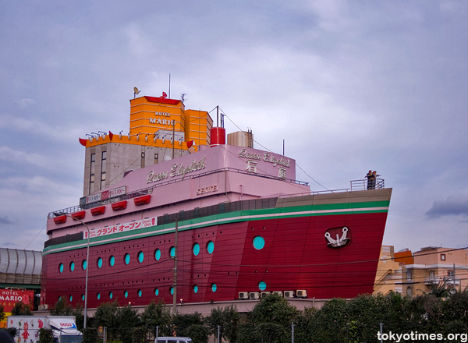 Japan is packed with thousands of ‘love hotels’ – lodging that can be rented by the hour. Not just for illicit activities, these hotel rooms can only be rented by couples and are often used for a quick private getaway. The options for themed fantasy rooms are practically endless, ranging from kinky to downright bizarre. The Queen Elizabeth Love Hotel in Kanagawa, near Tokyo, is one of the country’s most popular. Shaped like the famed Queen Elizabeth ship and painted in hues of pink and red, this love hotel features a weird tribute to the movie Titanic with statues of the characters Jack and Rose perched on the bow. Most of the rooms here have a naval theme. 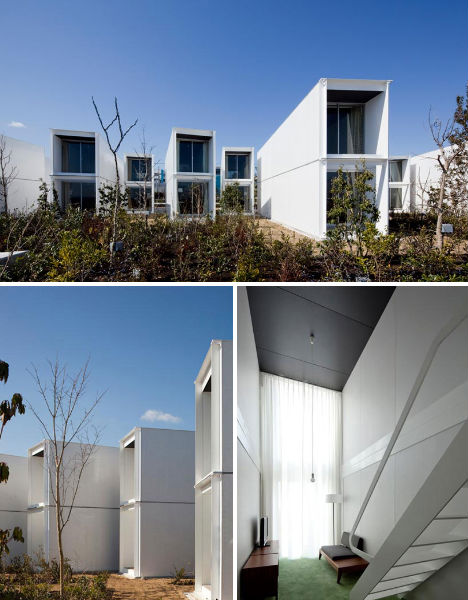 Stacked, prefabricated modular units make up the modern ‘cottages’ at the Bayside Marina Hotel in Yokohama, designed by Yasutaka Yoshimura architects. The cottages are each placed at a unique angle so that every guest has a slightly different view of the bay. 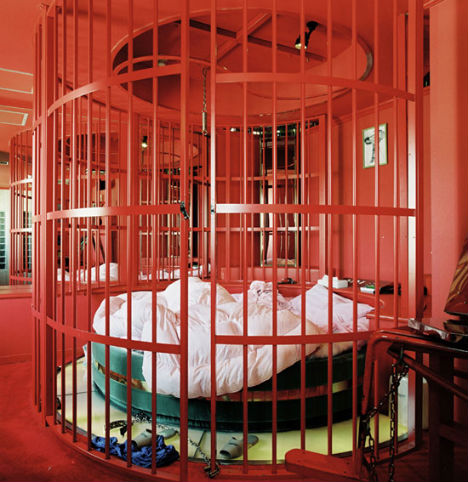 Another love hotel, the Pamplona in the Dotonbori district of Osaka, is definitely one-of-a-kind and not an experience you’ll find in many other countries. The hotel is unapologetically sex-centered and among its many unusual themed rooms are a ‘party room’ resembling a torture chamber and an S&M room with a round caged bed. Not for the shy or faint of heart! 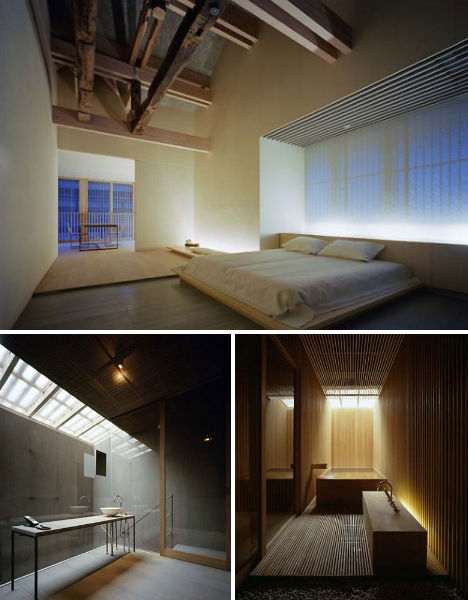 Want to stay in a hotel that’s modern yet quintessentially Japanese, without all the kitsch and bizarre décor? The 8-room 4-star Fujiya Inn boasts a relaxing location on the Ginzan hot springs in the Yamagata Prefecture. Crafted almost entirely of wood, the hotel is serene and inviting, ideal as a stress-busting retreat in between long soaks in the springs. 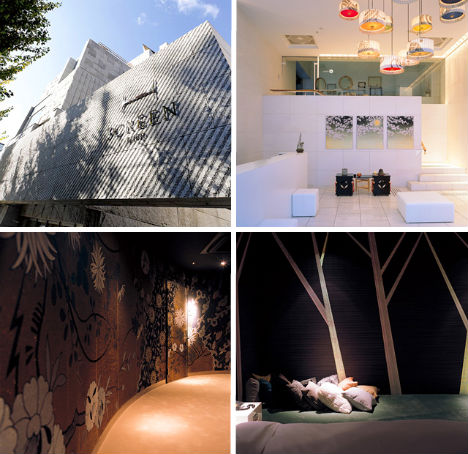 Somewhere in between a sleek modern hotel and a ryokan is the Screen Hotel in Kyoto, a hybrid boutique peppered with shoji screens and tatami mats but dominated by swaths of crisp white and unexpected pops of bright color. Each of the thirteen guest rooms was designed by a different artist. The blocky concrete exterior is a far cry from the surrounding city’s traditional Japanese looks and culture, but it’s fun and stylish and unlike most ryokans, provides sofas for Western guests who aren’t used to constantly sitting on the floor. 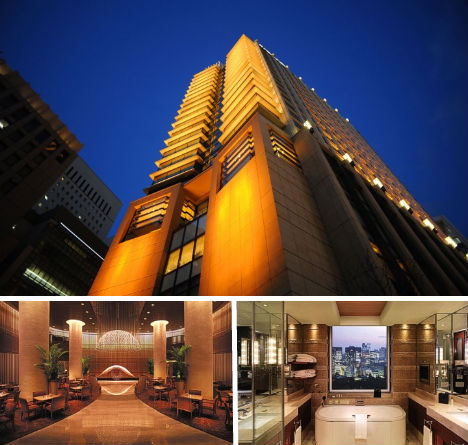 It’s not for the light of wallet, but the Peninsula Hotel definitely offers luxury to those guests who can afford to stay there. Overlooking the Imperial Palace, the Peninsula is ideally located near commercial centers in Tokyo. Its exterior was designed to resemble a traditional Japanese lantern, and inside you’ll find bamboo sculptures, lots of cherry blossoms and local art. 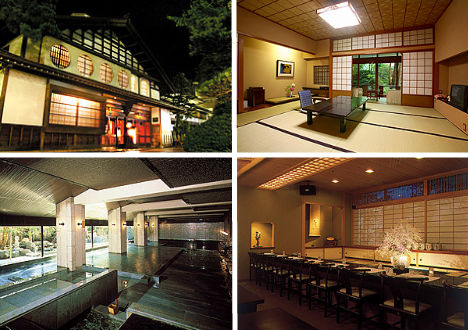 Often named among Japan’s top 5 ryokans, Hoshi Hokuriku has an even more impressive reason to stand out: it’s been verified as the oldest hotel in the world. It opened in the 8th century and has been operated by the Hoshi family for an incredible 46 generations. The hotel itself has 100 elegant and understated rooms along with a private guest house sited in the center of the gardens, decorated in a red-and-white check pattern native to the Hokuriku region. Guests can enjoy a number of outdoor hot springs as well as two indoor hot springs baths and family baths that can be privately reserved. 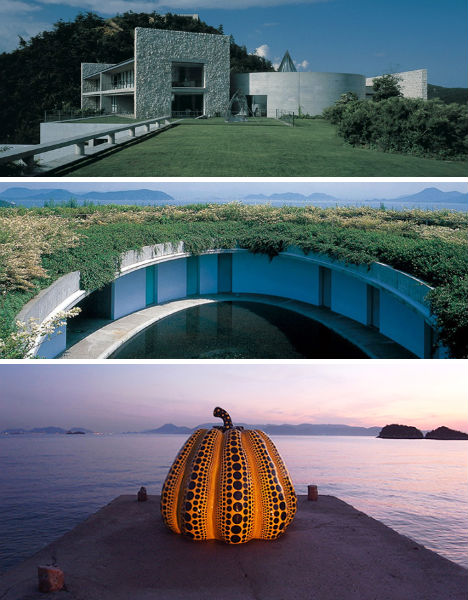 Savor Japanese art, architecture and luxurious accommodations all in the same place at the Benesse Art Site in Naoshima. Yes, you can actually stay the night in a museum in facilities designed by renowned architect Tadao Ando and gaze out the window at stunning sunrises and sunsets in any of 6 available rooms. All look out upon outdoor art and are yards away from works by Monet, Andy Warhol and other notable artists. Particularly notable is ‘The Oval’, a guest suite built into a hill with a huge circular skylight and a reflecting pool. 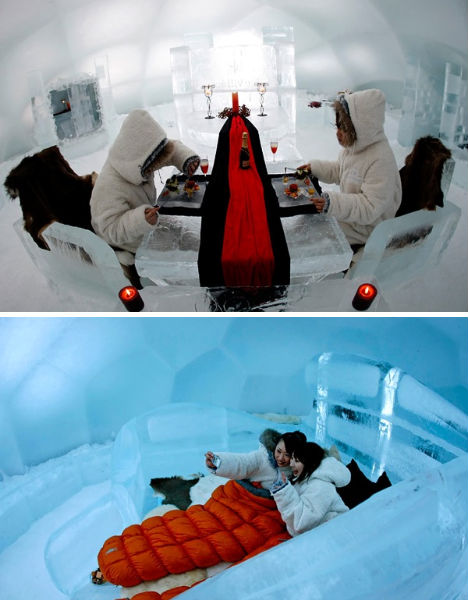 Japan even has its very own ice hotel, a resort where you can curl up on a frozen slab in a sleeping bag and marvel at the novelty of your surroundings. Alpha Resort-Tomamu’s ice village offers steaming hot tubs among giant hunks of ice, and in the nearly all-ice dining room, even your dinner plate is made of frozen water. 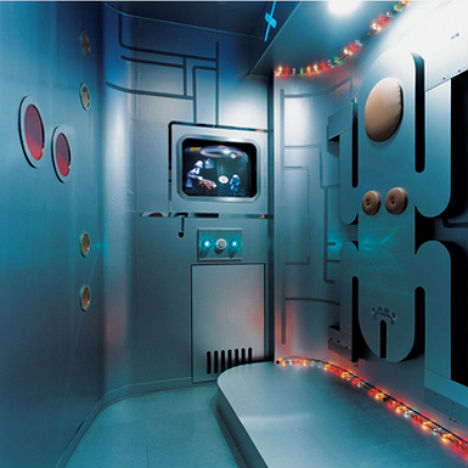 If your deepest fantasy is being abducted and experimented upon by extraterrestrials, you’re in luck. Osaka’s Hotel Loire (yep, another love hotel) has a very special room that is either outrageously fun and weird or totally terrifying depending on your point of view. Other kooky fantasy rooms at the hotel include a doctor’s office and a replica of a subway car. 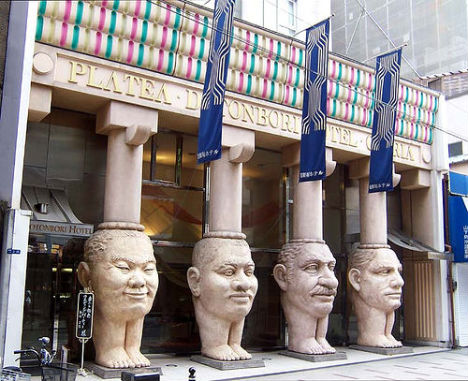 Three minutes from Namba Station in downtown Osaka, the Dotonbori Hotel has a lot going for it in terms of location and reputation – it’s a popular destination for travelers on business or vacation. And while the interior is not nearly as eye-popping as many other hotels in Japan, it’s the exterior that really grabs people’s attention with its wonderfully weird gigantic statues.