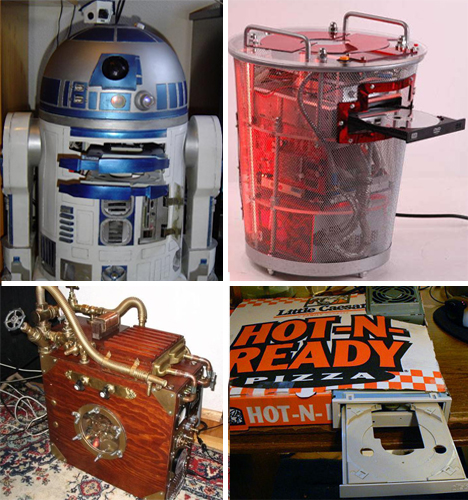 Everywhere you look today you see run of the mill, quotidian computer cases that simply lack any kind of “wow” effect. Technology blazes forward, yet the design of the desktop case remains relatively unchanged. It doesn’t have to be this way, and many people have actually designed their own, unique computer cases that match their own individuality and taste. Below are 19 of the most distinctive and amazing computer case mods around. 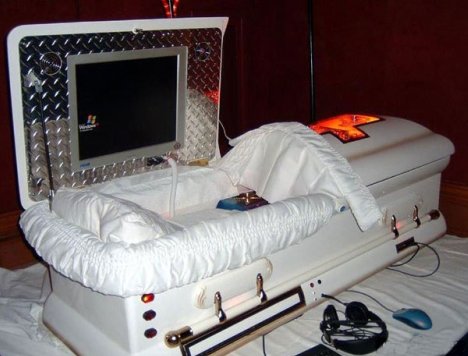 This unique workstation design gives whole new meaning to the term “blue screen of death!” When the top is closed, some might wonder who you have buried in your home office, and you can slyly reply, “the last intern who defied my wishes!” However when open, the coffin workstation is a capable and brilliantly designed machine! A cross shaped window on the far end of the case even gives you an illuminated look at the guts of the machine! 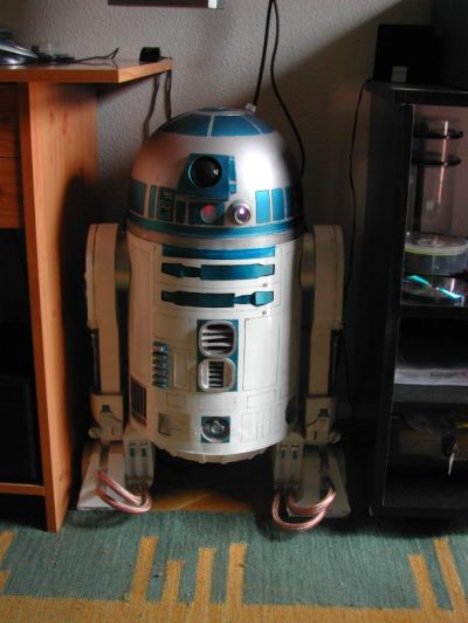 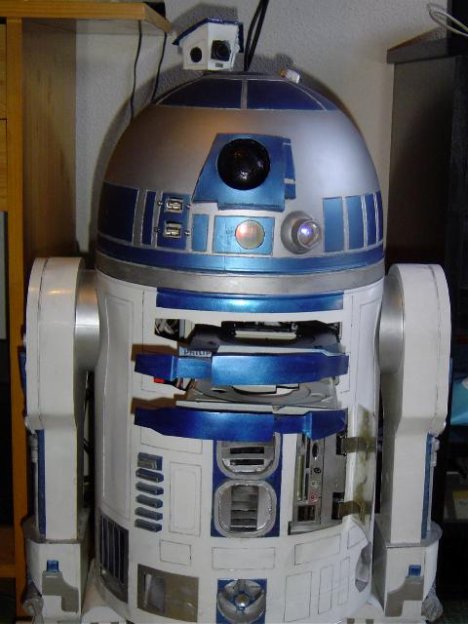 This computer is encased completely in an R2D2 robot shell. This droid has got it all, including double-decker CD-ROM drives. Wouldn’t it be awesome if it came with a real working projector out of the little scope under his “eye?” Star wars fanatics would have endless fun projecting Princess Leia all over the room saying, “Help me Obi-Wan Kenobi! You’re my only hope!”
Awesome Glasswork 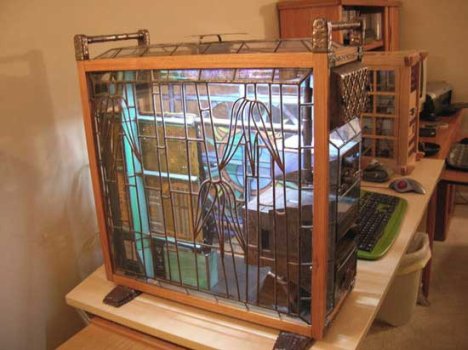 Reminiscent of the glass work one often finds in cathedrals, this computer case mod proves that technology can also be art. The gorgeous glass sides of the case show flowers extending downward from the top, and the glass is ever so slightly frosted. Soft lights on the inside of the case give the artwork a gentle feel. Tying it all together is a light brown wooden frame work and dark gold colored handles. 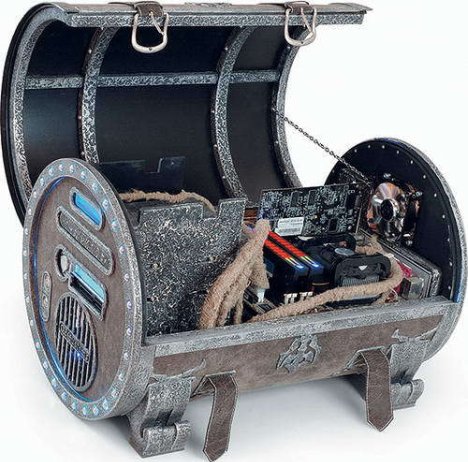 When one speaks of archaic technology, this is not exactly the what they mean. This small computer was engineered to fit inside a portable case that looks like something you might find in an enchanted forest. Even the wires are insulated in fraying browned cloth. Want to bring it to the LAN party down the block? Just close the top, fasten its straps and you’re good to go. 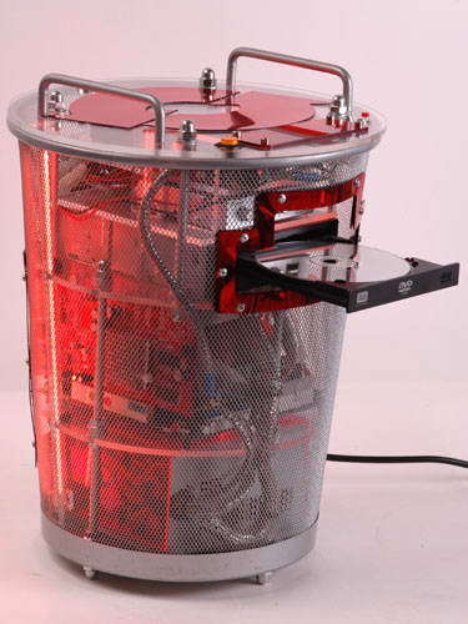 This is a mod that must have been no simple task to engineer. Occupying a waste bin, this environmentally friendly PC reminds you to recycle with its lid. It’s too bad this bad boy isn’t a Mac – it sure looks a lot like the OS-X trash bin icon, doesn’t it? 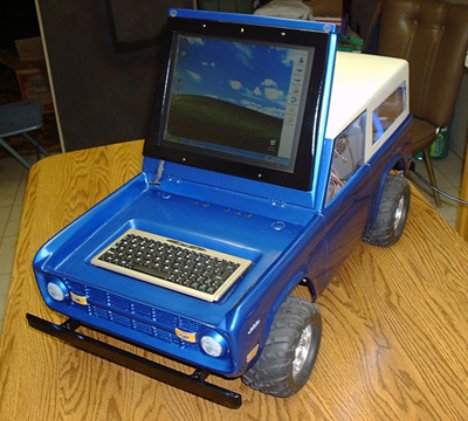 Now this is one case mod that you cannot tell your kids not play with. “Son, don’t touch the computer! Its not a toy! Er…well…not anymore anyway!” With a small flat screen and keyboard under the hood, this Ford Bronco look-alike PC is an all in one workstation. Hook up a mouse, turn the key and you’re ready to hit the information superhighway! 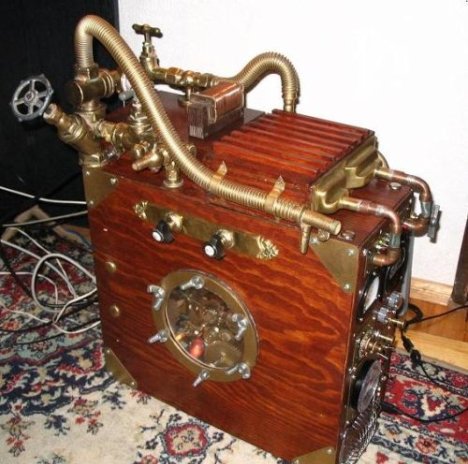 Fans of steampunk art are sure to love this amazing looking case mod. With valves and copper pipes extending all over the outside, this PC looks like its ready to fire up and hit the rails. The dark stained wood adds to the intriguing appeal of this case mod which is yet another example of technological artwork. 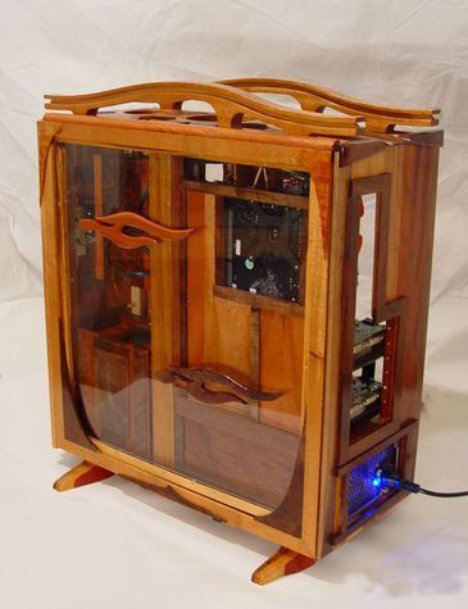 Sometimes a case mod doesnt have to be shocking or intricately detailed to be worthy of praise. This wooden design is rather simplistic and minimalist, yet it is still beautiful and worthy of mention.  Wood staining is the key to this piece’s interesting design. Everything on this case is made out of wood, including the inner support structures. No bling, no sparkles, just well executed woodwork applied to an interesting concept. 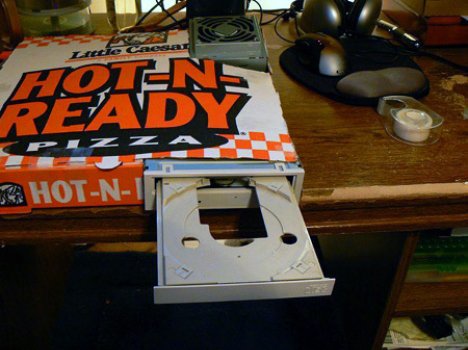 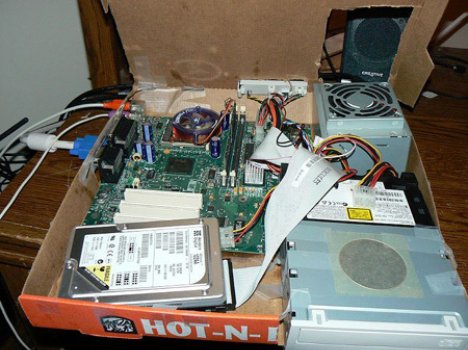 The perfect computer for a college dorm room, this computer case is nothing more than an old pizza box with the requisite computer components shoved into it. Perhaps a tongue-in-cheek joke about the sterotype of the amount of pizza consumed by computer geeks, this case mod is quite bizarre. At least the designer remembered to cut an opening for the fan, although air circulation through a cramped cardboard pizza box can’t be very good. Playing a high-powered video game on such a machine might just result in a fire. 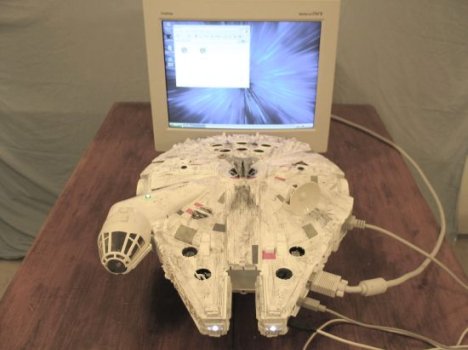 Have you ever wished you could pilot the Millennium Falcon? This might be the closest you can come without getting yourself cast in a fan remake of the Star Wars movies. This computer is contained entirely within the famous battle ship from Star Wars, and it’s both detailed and functional. Even the desktop background appears as though you are zooming through space! Mod away, and may the force be with you. 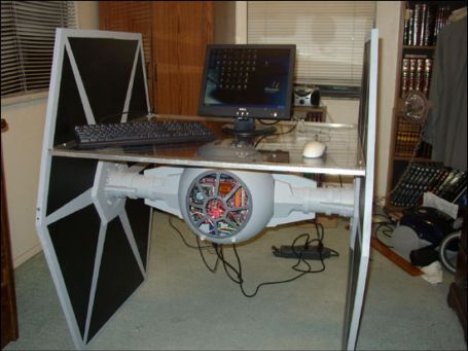 Step behind the controls of an Imperial Tie Fighter every time you sit down at the PC. You will never have felt so powerful blasting n00bs away in online game play as you will sitting at a massive Tie Fighter desk. The entire computer is housed in the body of the fighter, which appears to provide more than adequate room for all of the necessary guts. 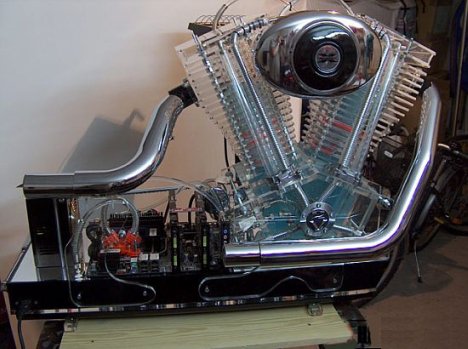 Harness the power of a legendary American Harley Davidson motorcycle with this awesome computer mod. For all those who love their bikes for their design as much as their power, this is the computer for you. The coolest part? The engine actually runs! The small V2 engine uses its pistons to pump water through the computer, cooling its components off. Not even West Coast Choppers can top that! 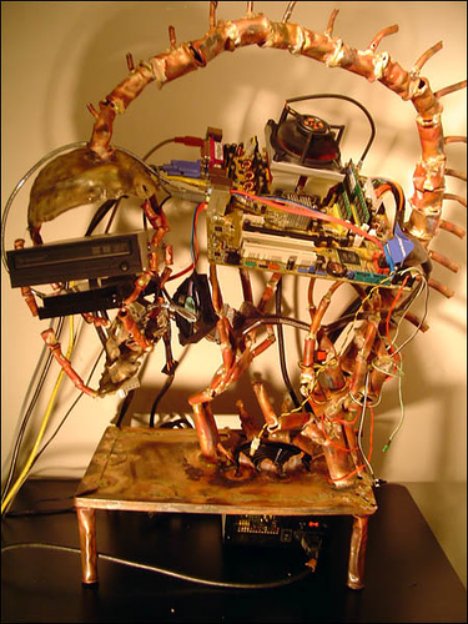 Ever see a computer’s skeleton before? This design is refreshingly freaky and begs to be studied.  It almost appears as though it belongs in a Tim Burton flick, the sort of computer Jack Skellington would use. It appears as if it is lunging out at you like some kind of perverse jack-in-the-box. One can only speculate on the artist’s inspiration for creating this work. 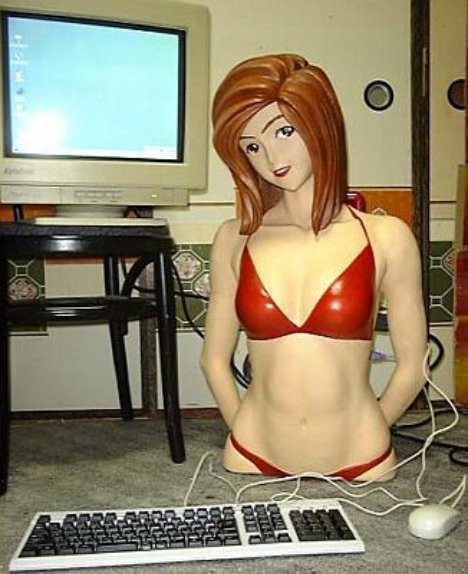 For all those who consider their PC their second girlfriend, why not at least enjoy looking at it? With this bikini babe case mod, you no longer have to feel ashamed for referring to your computer as sexy! Your real girlfriend might get jealous as you slowly start spending more time at the keyboard, but who can blame you? 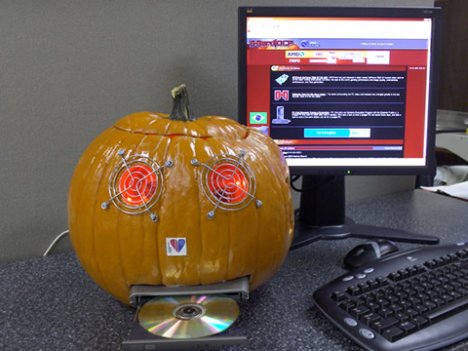 The eyes of this Jack-O-PC complete the freaky Halloween look. Fan vents and red LEDs! How much more evil can you get? It appears that you can even take the top off to inspect the computer’s insides – just be careful of the seeds! The case appears to be made out of hand crafted pottery. The look is completed with a CD-ROM drive for a mouth. This computer is delightfully bizarre and begs you to ask: “trick or treat?” 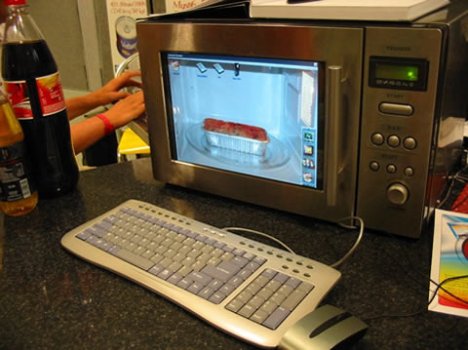 No, that isnt a casserole heating in there, thats the screen! This entire computer is housed in an old microwave with the screen built into the door. One has to wonder if the old microwave controls have any effect on the system. It would be pretty amazing if it was possible to set fan speeds and regulate temperatures with the old timer screen. 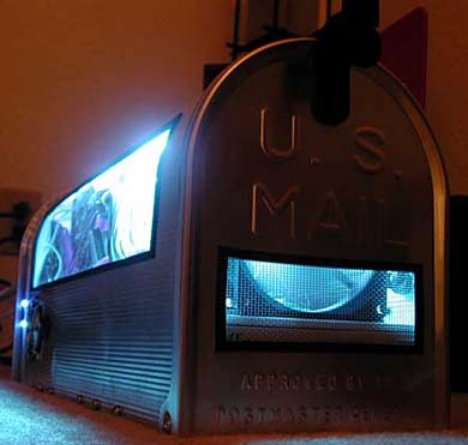 This case design gives whole new meaning to the old “You’ve Got Mail” notification. Wouldn’t it be cool if the red arm on the side would raise every time a new email arrived? This case mod features a blue light to illuminate the inside of the computer, which nicely complements the silver metal exterior. So go ahead, jump into an Unreal Tournament game room and go postal!

Lord Of The Rings Style 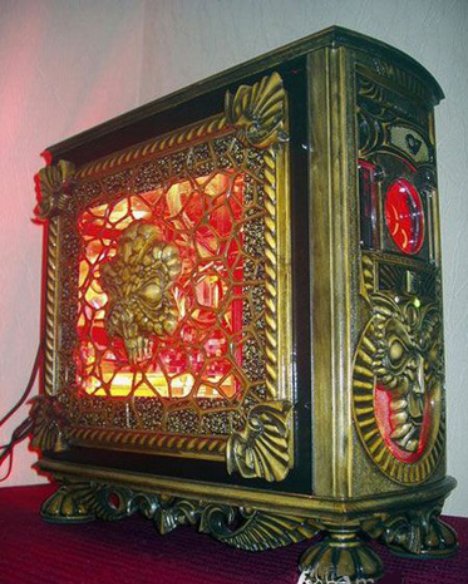 Looking like an old mystical book from medieval times, this computer would go great with a old pewter  chalice and a posset. If Ash from The Evil Dead movies had a personal computer, is would look like this. Complete with ominous red glowing insides, this computer just looks bad-ass and evil. 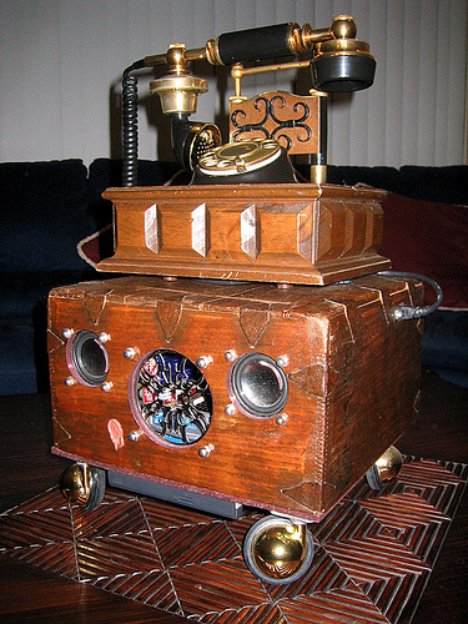 Marrying the technology of yesterday to that of modern times, this phone PC is both beautiful and functional. It is even conveniently on wheels, letting you roll it from one room to the next. The only thing that could make this case mod even cooler would be a working phone line hooked up to the phone.