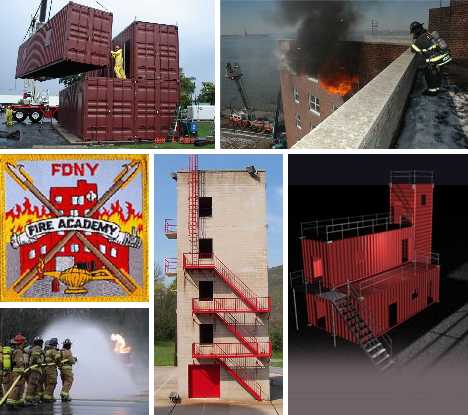 When you’re a firefighter, practice makes perfect… but where do they practice? Even the most sophisticated computer simulator can’t replicate the hazards real towering infernos pose to firefighters who risk their lives to save yours. That’s why an industry has sprung up to provide fire departments with specially designed, imitation buildings to help them hone their unique techniques. 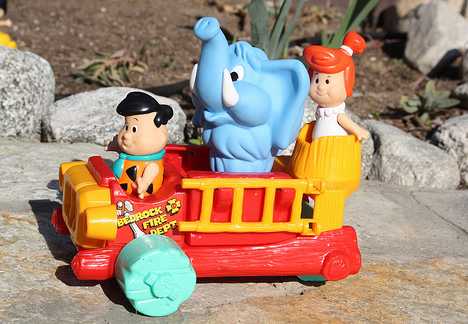 Our fortune, their flame… fire departments the world over have been saving lives and sparing property since at least ancient Roman times, the latter somewhat surprising since weren’t all those temples and such made of marble? But hey, if The Flintstones’ Bedrock can have a fire department, anyone can. 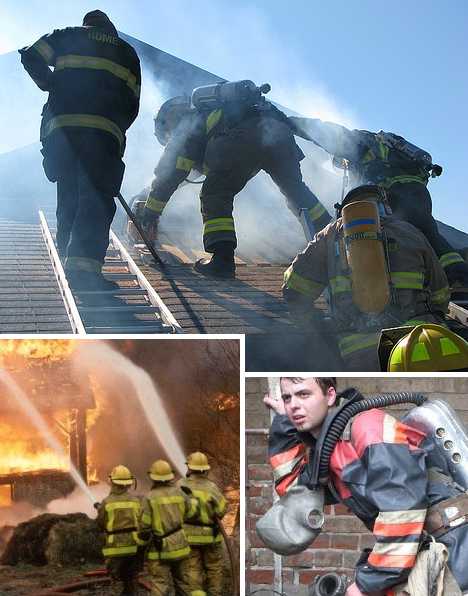 As with most occupations that may involve saving lives, training is of paramount importance. Firefighters, however, are faced with a variety of potentially deadly situations that simply can’t be duplicated using computer simulations. 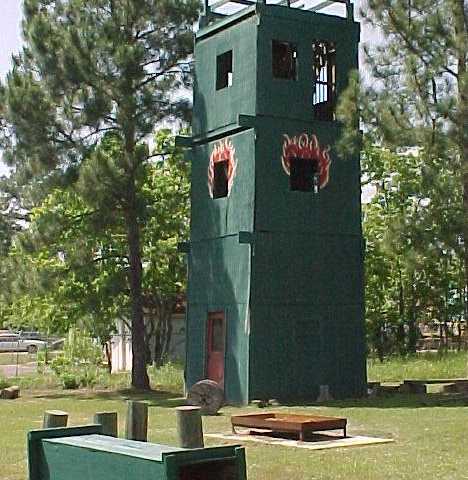 Even firefighting fundamentals require hands-on training that can’t be done in front of a computer screen. The above fire training tower will never see flames other than its awesome paint job. This tower is used to practice ladder training, rope training, rappelling, hose practice and rescue techniques. 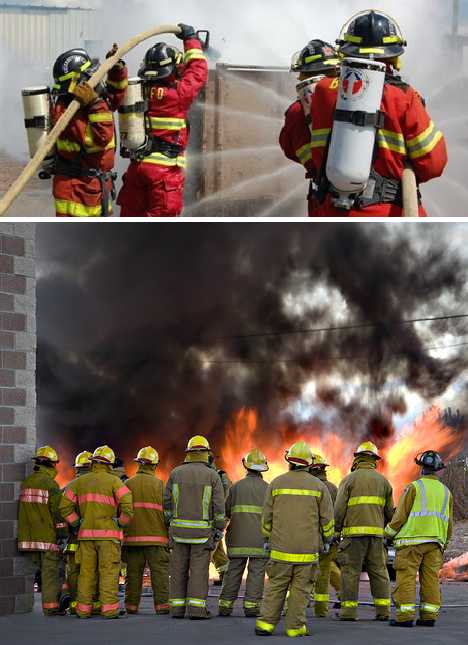 The main event, of course, is fighting fires. Fierce flames, broiling heat, blinding smoke and treacherous footing all come into play, and firefighters must deal with these factors and more while wearing heavy protective suits and helmets. I’d say it’s impossible to train for the real thing without, say, setting an actual building on fire… and I’d be wrong. 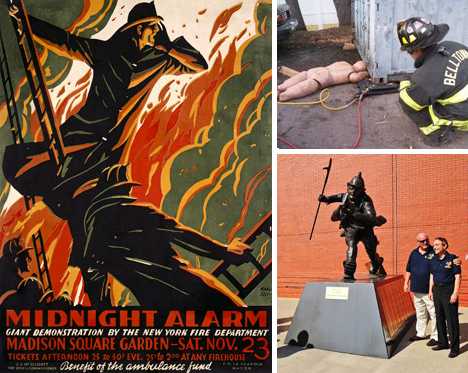 Firefighter training does involve setting buildings on fire, though they’re not “real” buildings. Instead, a niche industry has sprung up to provide fire departments with imitation buildings that not only approach the desired realism of an actual fire, they can be set on fire time and again without loss of life, livelihood or property. 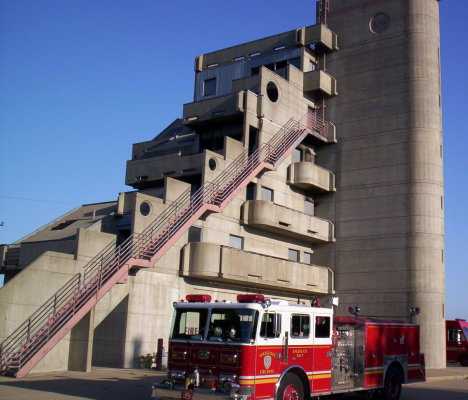 The city of Louisville boasts one of the most impressive firefighter training towers around. The concrete Fire Environment Building (“The Tower”) stands 70 feet tall and is used for hose & ladder practice, physical drills, and live burns. 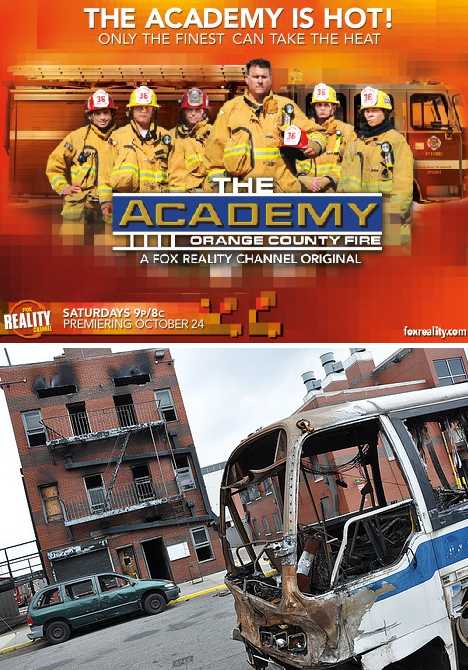 Training towers and other firefighting practice areas are the chief outdoor components of the nation’s dedicated fire training facilities. One of the most famous of these is the FDNY Fire Academy and Training Center located on Randall’s Island. 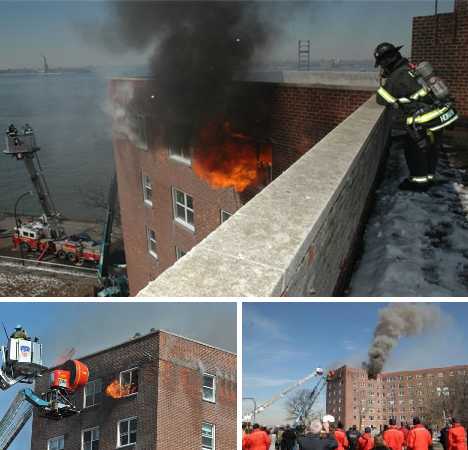 The FDNY will also occasionally co-opt a nearby abandoned building, such as the one above on Governor’s Island, to conduct specialized testing and situational training. The test shown above, conducted in partnership with NIST, occurred in March of 2008 and involved monitoring the progress of a wind-blown fire and the associated smoke and toxic gases.

Don’t Say It, Spray It 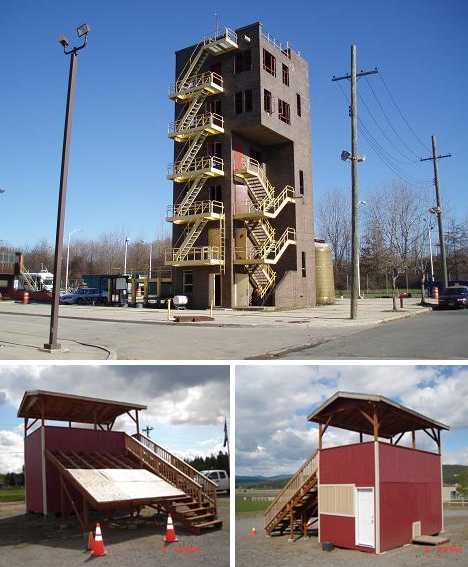 (images via: Westchester and Firefighter Nation)

The FDNY is by far America’s oldest fire department, tracing its roots back to 1648 when New York was called New Amsterdam (why they changed it I can’t say, people just liked it better that way). The FDNY Fire Academy has set the bar for other, similar fire training facilities across the country and overseas as well. The New Jersey Division of Fire Safety lists well over a dozen such fire training facilities in the Garden State alone. 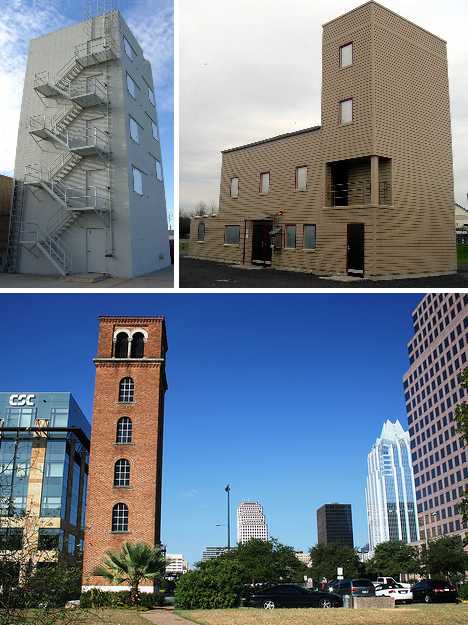 (images via: Fargo Fire Fighters, City of Auburn and RuggerJoe)

Though larger fire departments can afford (and indeed, require) expansive and expensive centers like the one on Randall’s Island, smaller municipalities also face the problems of providing fire training facilities that give them the most bang for taxpayer’s bucks. To meet their needs, a rough standard in training structures has evolved to offer a number of different firefighting situations in a single, purpose-designed building. 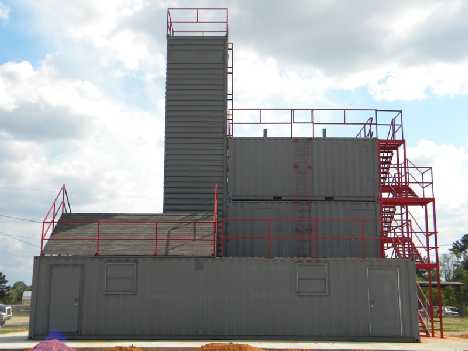 The odd thing about firefighter training buildings is that though they try to combine a variety of different building types into a single structure, the finished product is unlike any building you’ve ever seen! And yet, the various design details are all very familiar – it’s just the unusual conjunction that makes the building seem somehow not quite right. 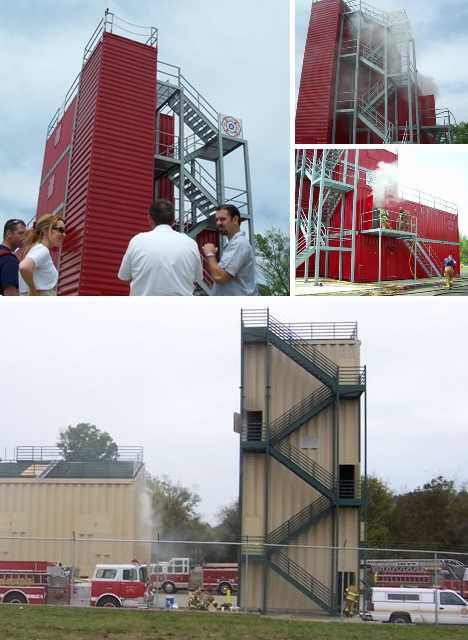 (images via: City of Bloomington and Franklin TN)

You’ve got your low flat roof, high flat roof, sloped suburban style roof, an apartment highrise tower, balcony railings, and last but not least… the fire escape! “But today’s apartments and highrise office buildings don’t HAVE fire escapes,” you say? True enough, but it often seems that fires break out much more frequently in older buildings that do. 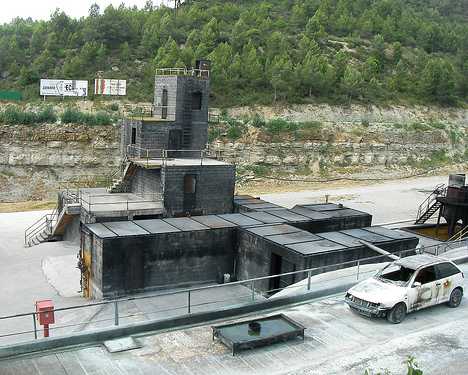 Some things can’t be replicated, however, such as the crowded urban environment found in the older centers of our cities. While stand-alone fire training buildings provide firefighters with easy access to the structure from all sides, they probably won’t find the same situation the next time the fire alarm goes off. 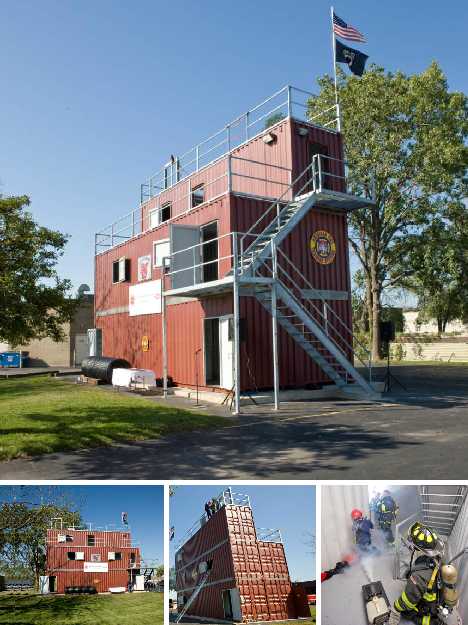 (images via: Village of Alsip)

Appearances aside, a bigger question remains: what sort of building, fake or real, can survive the repeated conflagrations firefighter training demands? Stone and masonry can become brittle and friable when heated, while wood… let’s just not go there. Steel would seem to be the most suitable material but if steel-plated buildings were practical (read “affordable”), we’d have them everywhere. 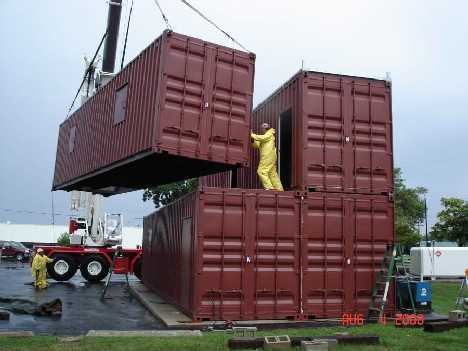 (image via: Village of Alsip)

Luckily, a by-product of the shipping industry has been found to be eminently practicable for constructing firefighter training buildings. I’m talking about used cargo containers, of which hundreds or even thousands can be found in the neighborhood of busy maritime ports. 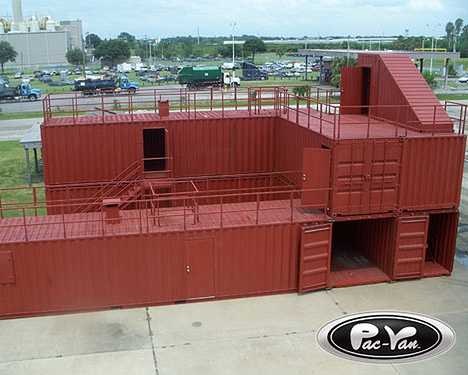 As regular readers of WebUrbanist are aware, shipping containers are already being recycled and upcycled into homes and apartments – and to my knowledge, none have burned down yet. 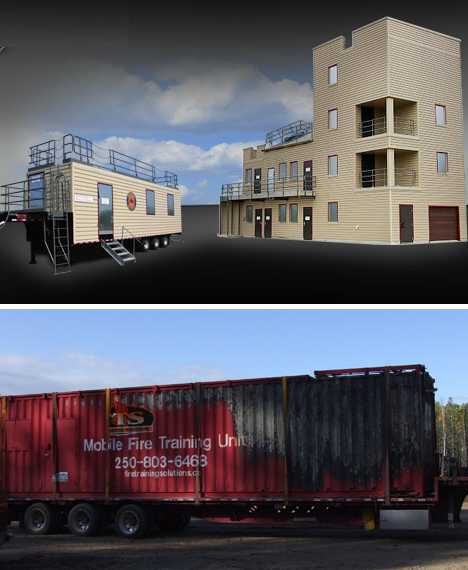 Companies such as Fire Training Solutions have gone one step further. FTS has partnered with BigSteelBox.com, British Columbia’s largest steel shipping container business, to produce Containerized Training Structures that can be made to order using used cargo containers. 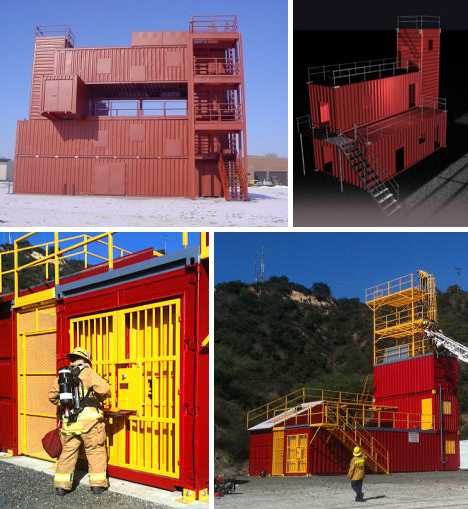 FTS also offers a Mobile Training Unit made from a steel shipping container that can be loaded on a semi-trailer truck and brought to where small fire departments can access it for training purposes.

Firefighter training facilities are some of the only multistory, multi-room buildings never to be inhabited, yet the role they play in keeping firefighters trained and ready greatly eclipses their perceived failure. Were it not for these buildings, the firefighters we depend on in times of trouble would fail in their goal of saving those caught in life or death situations – inside real burning buildings. Though these built-to-burn structures may fool the eye from the outside, in the end nobody looks like a stooge.