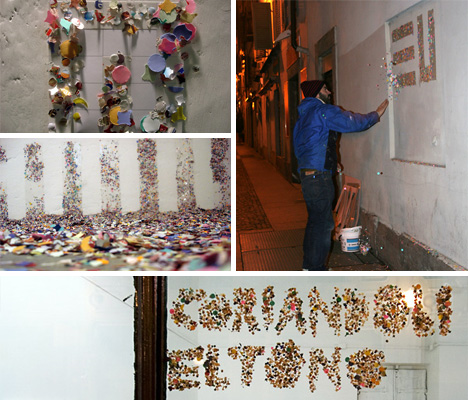 Graffiti is typically seen as a destructive, unsightly problem for cities – but there are, of course, times when it is incredibly beautiful. The Coriandoli project from French artist Eltono exemplifies the very best of thoughtful graffiti and playful art all rolled up into one massive project spanning multiple rooms of the Cripta747 space in Torino, Italy. 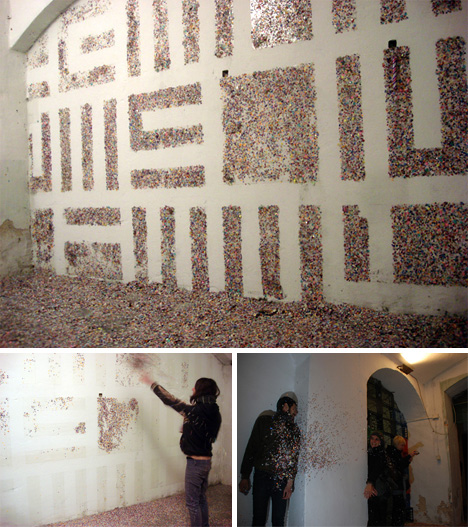 (all images via: Eltono)

Eltono’s graffiti is not rendered in the normal spray paint or even markers – it is put to the walls in the form of double-sided tape and joyful-looking confetti (“coriandoli” in Italian). The artist got the idea after passing by a window display in a paper shop: a jaunty little bag of colorful confetti caught his eye and caused an idea to take root. 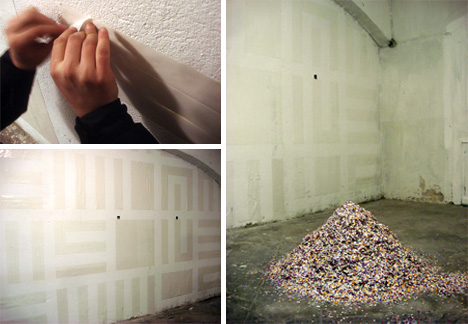 The Coriandoli exhibit is a delightful mashup of a normally-illegal, often-aggressive activity and the harmless – even adorable – act of throwing bits of colored paper into the air in the midst of a celebration. Eltono’s idea was to bring the two together in a way that no one had ever really thought to do before: he would create interactive confetti graffiti. 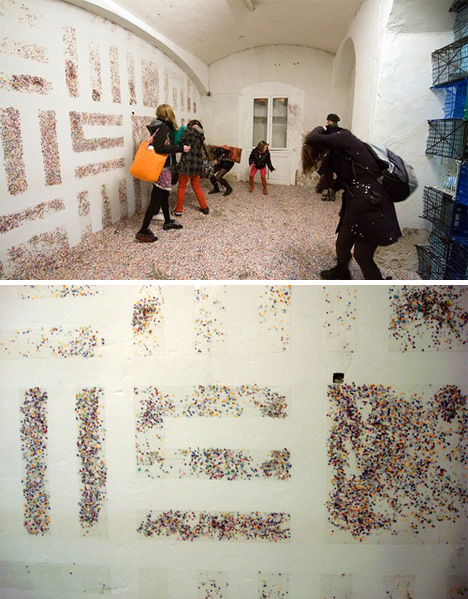 One room of the Cripta747 space was decorated with patterns of double-sided tape on the walls. Just before the gallery opened, Eltono removed the protective coverings from the tape strips and dumped a huge mountain of confetti in the middle of the room. From there, of course, it was only a matter of time before nature took its course and a mighty confetti war was waged. 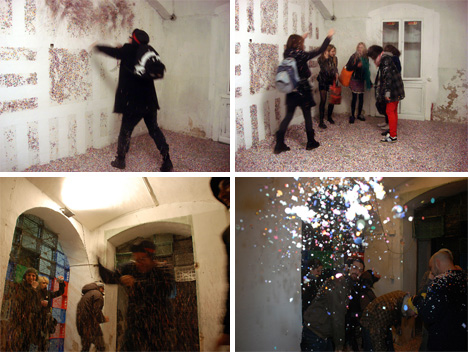 Attendees gleefully threw handfuls of confetti at each other and at the walls, participating in an impromptu celebration while also helping to create these unique pieces of art on the gallery walls. The resulting pieces were some of the finest interactive art imaginable: they were created by the public in moments of real fun and happiness, which (we think) is the way all art should be created.

Of course, Eltono could not let gallery attendees have all the fun. Before the opening, he himself sneaked out into the streets of Torino with a bucket of glue, some stencils and large amounts of confetti to create his own celebratory graffiti. At the exhibit opening he displayed the stencils he used in two other rooms of the gallery along with photographs of his finished pieces and monitors playing the above video.

In an additional experiment (which Eltono calls “an absurd idea”) the artist ventured out to a train tunnel to play with the wind generated by the trains. Placing pre-glued papers down beside piles of graffiti, Eltono and friend D.Y.O. stood back and let the swift winds of the tunnel rearrange the colorful bits of paper into art. These pieces, too, were hung in the gallery for spectators to enjoy. 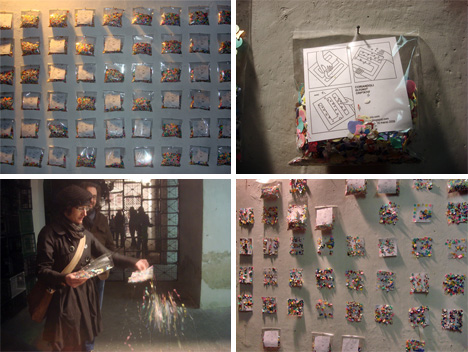 In one of the final surprises of the Coriandoli exhibit, Eltono hung 50 small DIY graffiti kits on a wall, inviting visitors to create their own amazing works of confetti art. The kits each contained a card with a double-sided tape design, a pile of confetti and instructions for use. Some attendees simply took their gift home with them, but many decided to make their own little works of art right then and there, and hang them on the wall for everyone else to enjoy.