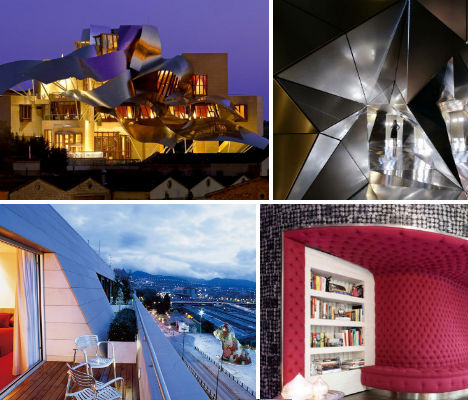 Lounge on the beaches of Barcelona, party all night in Ibiza, sample fine wines in Rioja country and relax among the beautiful people in Madrid – the vibrant nation of Spain has a lot to offer, not the least of which is a stunning range of stylish design hotels. These 15 accommodations represent some of the most modern and visually engaging hotels in Spain’s most sought-after destinations, from low-budget hostels to ultra-exclusive celebrity hangouts. 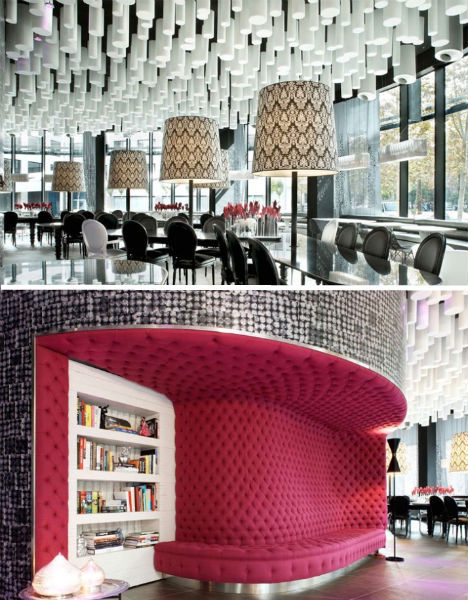 A four-star luxury hotel with affordable rates, the Barcelo Raval is most notable for its stunning transformation in 2009, which re-launched it as one of Barcelona’s most stylish places to stay. It’s flashy, it’s feminine, it’s full of eye-popping details like massive groups of dangling cylindrical lights in the lobby (an homage to the building’s distinctive elliptical shape). Bright, colorful and thoroughly modern, the Barcelo Raval is located in the city’s once-gritty, now increasingly trendy Barrio Chino district. 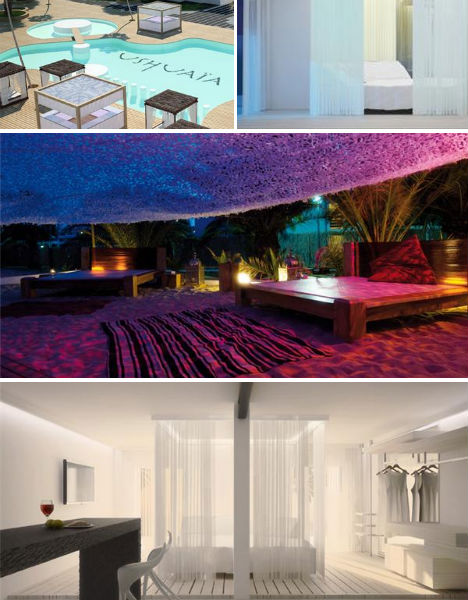 Venture off the mainland onto Ibiza Island and it’s almost as if you’re in a whole different country – a country where the raison d’etre is glittery all-night parties and lounging on some of the Mediterranean’s most beautiful beaches. While you’re there you might want to check out the brand-spanking-new Ushuaia Ibiza Beach Hotel, an exclusive adults-only party hotel located on the white sands of Playa d’en Bossa beach opposite one of the island’s most famous clubs, Space. This glamorous 236-room hotel has three restaurants, plenty of VIP perks, DJs spinning night and day, aromatherapy menus in the guest rooms and even swim-up rooms located along a man-made ‘river’ that meanders through the gardens. 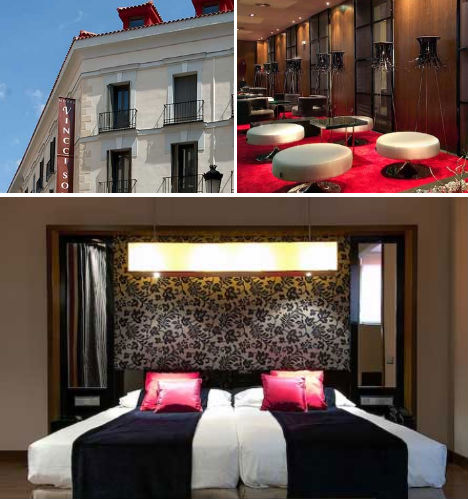 A quiet 4-star hotel in the center of the historic district of Madrid, Hotel Vincci Soho is a contemporary design hotel located just steps from the Art Triangle museums. The hotel is comprised of five buildings, all cultural heritage sites, renovated and combined into an open interior space with plenty of balconies and terraces offering stunning views of the city. 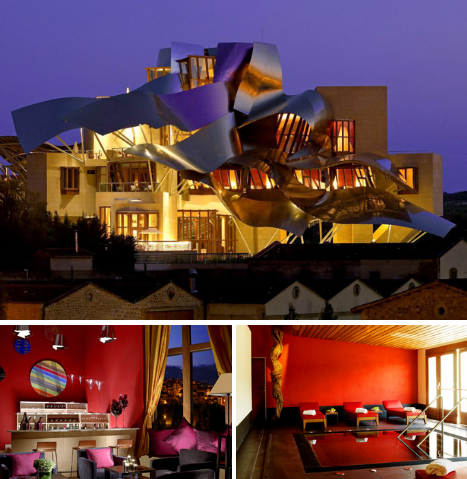 Designed by world-famous architect Frank Gehry, the Hotel Marques de Riscal can be found in Spain’s countryside in the heart of Rioja wine country, about two hours from Bilbao. This ultra-exclusive luxury boutique hotel has just 14 guest rooms and is, at least in terms of cost per square foot, one of the most expensive hotels ever built. Gehry’s billowing titanium roof contrasts beautifully with the more traditional architecture of the winery. The Marques de Riscal estate is one of Spain’s oldest and most esteemed producers of Rioja wine; even if you can’t stay here, a trip to the winery would be worth the effort. 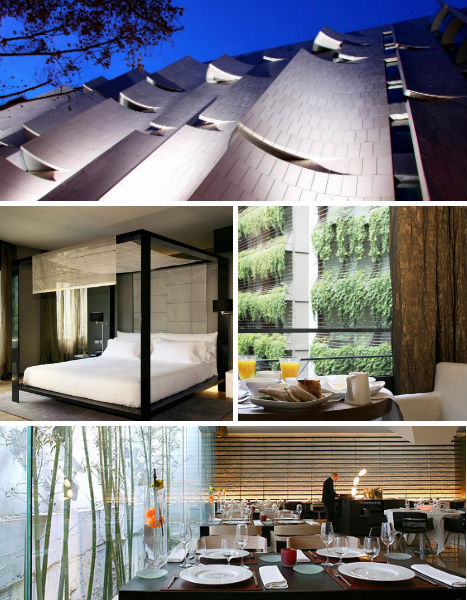 The Hotel Omm offers trendy décor and world-class Catalan cuisine in Barcelona’s Paseo de Gracia district, with individually designed guest rooms, a playful modern facade and lots of sunlight. It’s modern in a way that’s cozy and accessible, full of neutral tones and clean, straight lines. Just down the street from two of Antonio Gaudi’s most famous Barcelona buildings, La Pedrera and Casa Battlo, Hotel Omm has a rooftop terrace with a pool and a bar, perfect for gazing out at the iconic architecture of the area. 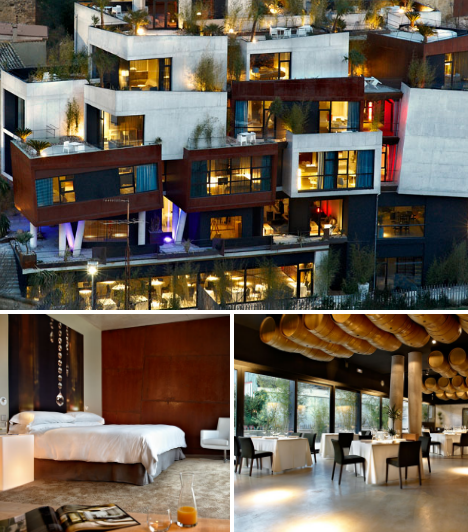 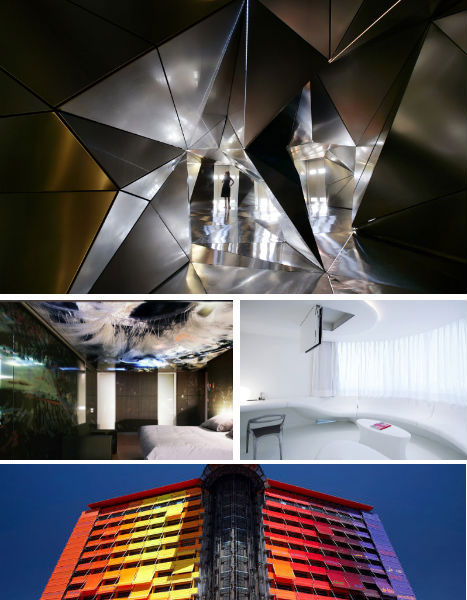 Hotel Puerta America, a new design hotel in Madrid, is already renowned for its artsy interiors: “You know that the Hotel Puerta America in Madrid is something special before you even walk in the door. The exterior is encased in brightly colored cladding printed with the poem ‘Freedom’ by Paul Ellard. But that’s nothing compared to the showcase of international design talent found inside. Each of the 12 floors of this new boutique hotel was designed by one of the world’s most sought-after architects including Zaha Hadid, David Chipperfield, Normal Foster and Jean Nouvel.

Ascending from one floor to the next, one encounters jarring shifts in color and mood, shifting from Chipperfield’s toned-down monochromatic luxury to faceted stainless steel to Italian opulence. Marc Newsom’s sixth floor is practically vampiric with its red lacquer, white marble and black furniture while Ron Arad takes the seventh floor to a futuristic, almost space-like place with curved white Corian. Interactivity, Japanese minimalism, industrial cement and zebra-striped formica walls are just a few of the other themes included in the eclectic mix.” 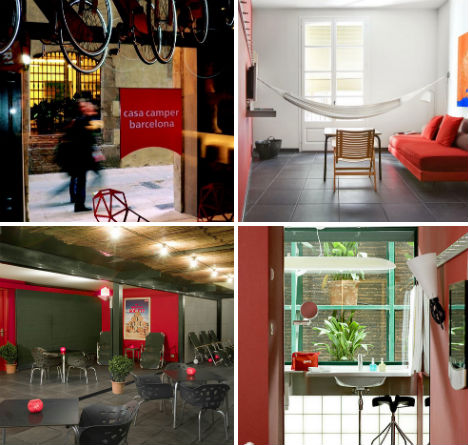 Camper makes cool and quirky shoes, but what do they know about hotels? Plenty, as it turns out. Casa Camper, the company’s new affordably priced hotel and restaurant, is hip and eco-friendly, with few unnecessary frills but lots of thoughtful details that make life easier for travelers. A 25-room hotel in Barcelona’s El Raval neighborhood, Casa Camper uses solar power to heat the hotel’s water and serves up “healthy fast food” in the form of flavored rice balls, which you eat sitting on a giant set of concrete stairs facing out through a wall of windows. El Raval, a traditionally poor area of historic Barcelona, is a bit off the beaten path, but, says owner Miguel Fluxá, “We wanted to show guests another part of Barcelona that is not so obvious.” 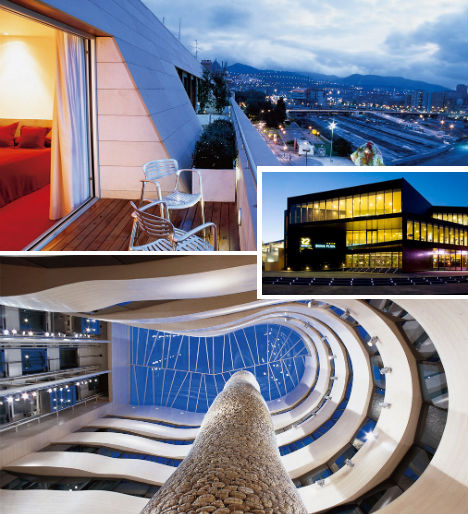 Literally standing in the shadow of the Frank Gehry-designed Guggenheim Bilbao, the Gran Hotel Domine basically had no choice but to be stunningly stylish. Ultramodern yet seemingly effortlessly sophisticated, this luxury 5-star hotel has 145 modern guest rooms and a rooftop terrace with amazing views of the museum and the city of Bilbao. Its polished stone exterior and slanted glass windows provide a hint at the somewhat quirky stylings of the interior including a massive tower of stones that reaches from the lobby floor to a glass atrium roof. 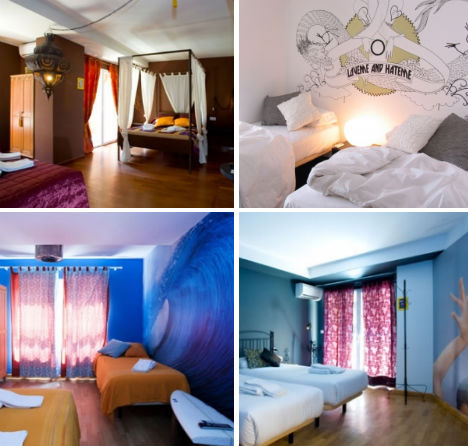 Spain – as the rest of the world – is full of uninspired hostels that provide little more than a roof over a budget traveler’s head. The Rooms Deluxe Hostel in Valencia is not one of those places. This ‘designer’ hostel still offers up dirt-cheap bunks and private rooms but does so in style with 28 themed rooms designed by local artists. It’s got free wi-fi and – a bonus in the world of hostels – air conditioning. Best of all, it’s located right across from the City of Arts and Sciences, halfway between the historic district of Valencia and the beach. 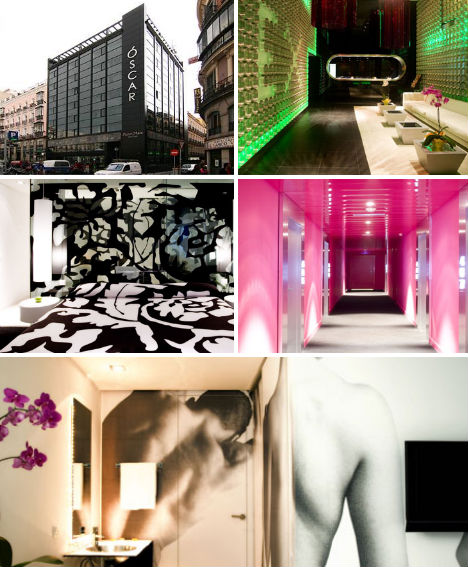 Who says good design is only for the beautiful people? The Hotel Room Mate Oscar in Madrid is well within the average traveler’s budget, but doesn’t skimp on bold and dramatic choices in interior décor. Its 75 individually decorated rooms are fun, bright and unexpected, often veering into “wow, this is wild” territory. The breakfast room is so snazzy it might as well be a nightclub, and the hotel also has a popular rooftop pool. 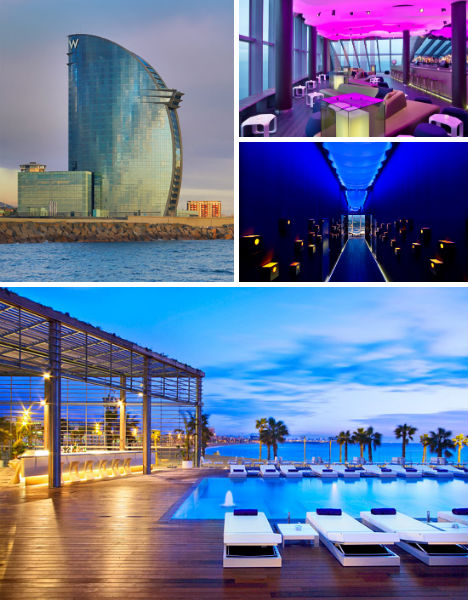 You can’t miss the sail-shaped Hotel W at the Port of Barcelona, a soaring 26-story structure that sits perpendicular to the dock to give virtually all 473 guest rooms picturesque views of the city and the sea. With a rooftop bar, lots of outdoor terraces and an infinity pool right on the Mediterranean, the W is an unparalleled way to experience seaside Barcelona. It’s a 25-minute stroll from Las Ramblas, making it a better choice for the seasoned Barcelona traveler or those who want to stay on the beach rather than attraction-obsessed first-time visitors. 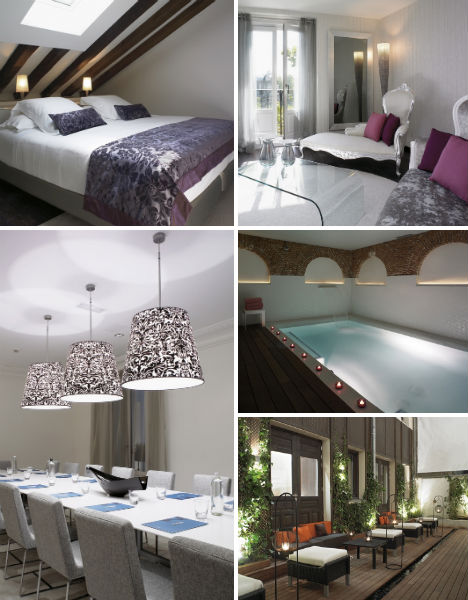 Peace and relaxation are the main themes at Hospes Madrid, a 41-room 5-star luxury hotel adjacent to the Parque Del Retiro, a large park in the city center. A serene color palette of white, beige and gray accented with soft shades of purple, mauve and coral enhance the soothing effect throughout the standard and deluxe rooms, the junior suites and the seductive Grand Suite. Guests can enjoy a tapas bar, a restaurant specializing in natural and healthy foods, a ‘Chill Out Patio’ and an indoor pool. 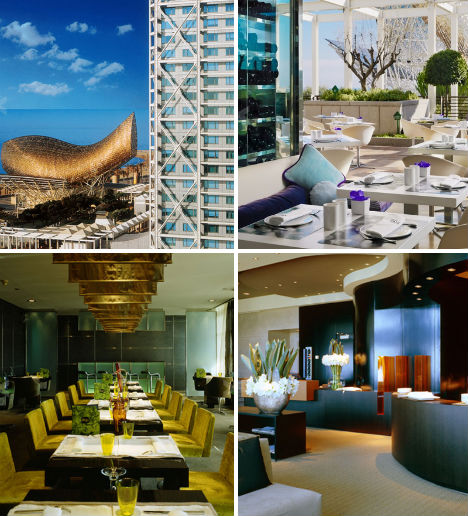 Tower above virtually everything else in Barcelona when you stay at Hotel Arts, located right on Barceloneta Beach in one of the 44-story Vila Olímpica towers. The Hotel Arts, managed by the Ritz-Carlton Company, has 438 guest rooms including 32 ‘club’ rooms, 44 executive suites and 28 luxury apartments; club-level guests get exclusive access to a private lounge. Outside the busiest parts of the city center, Hotel Arts is a quiet way to experience a very vibrant and active city. 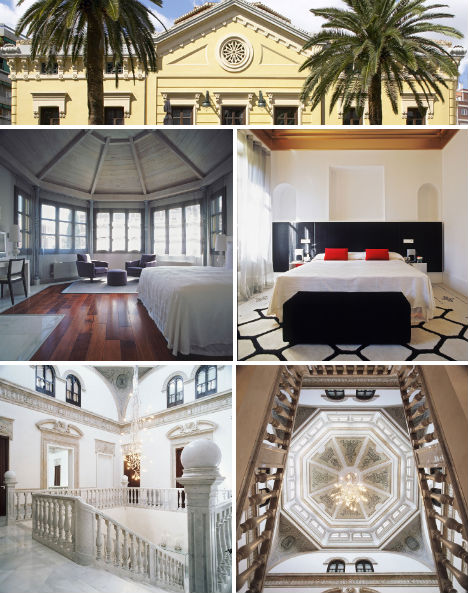 A 19th-century palace in one of Spain’s most stunning historic cities has been given new life as a chic modern hotel, the Hospes Palacio de los Patos. Once a Roman stronghold, the city of Granada is best known for its Moorish influences and retains a romantic and utterly unique sense of self that has been translated into all 42 rooms of the hotel. Muted tones of gold, silver and champagne echo the colors of the city outside and somehow manage to tie together the history of the building and its contemporary décor.