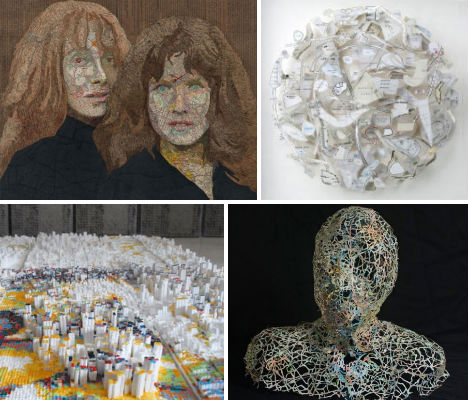 Maps aren’t just two-dimensional pieces of paper depicting the locations and geographic features of the world. They’re the basis for portraits, sculptures and clothing, and are reconstructed or reimagined by these 15 artists in the most curious ways – whether recreated solely with typography, dissected and rearranged or used to illustrate information that can be humorous or disturbing. 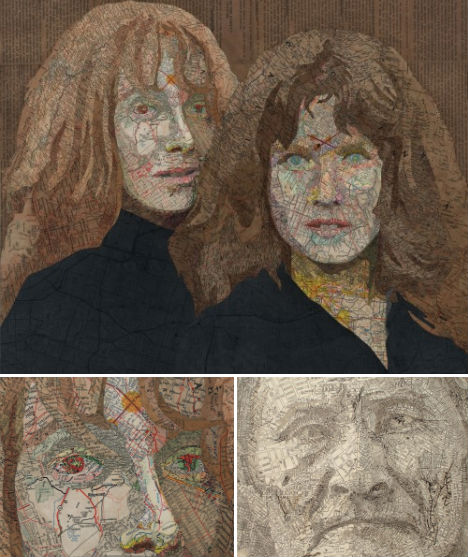 Matthew Cusick cuts apart maps to create stunning collages and sculptures, including these portraits. The Dallas, Texas artist collects maps and cuts them apart according to color and shade, pasting them into these compositions on a board backing. But the particular maps chosen also have meaning in reference to the subject: “The people I construct out of maps represent certain ideas and moments in time that resonate deeply with me,” he says. “The maps I choose for each work relate to that person’s timeline and history. I’ll use these maps as a surrogate for paint but also as a way to expand the limits of representational painting. Each map fragment is employed both as a brush stroke and a unit of information. The human form acts as a matrix in which inlaid maps from different places and times coalesce into a narrative.” 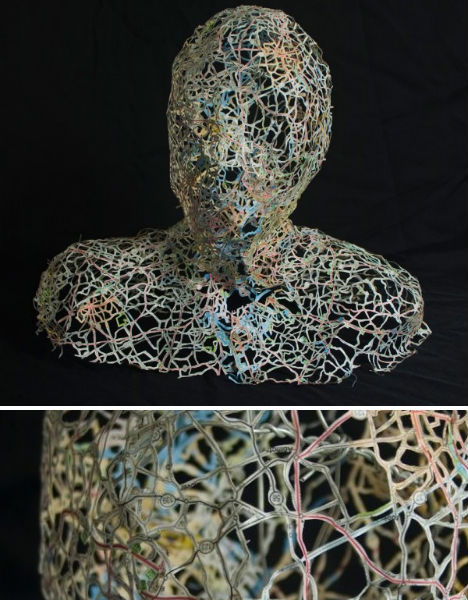 Delicately interwoven like veins, the tiny green, blue and red strips of maps used to create these incredible sculptures are molded around a packing tape form to create a three-dimensional shape. Artist Nikki Rosato removes the land masses, leaving nothing but the roads and rivers behind, reinforcing the paper with wire as necessary. Rosato told Wired UK: “Through the removal of the land masses, the places almost become ambiguous since all of the text is lost. Unless someone really knows the roads and highways, it is almost impossible to identify the place.” 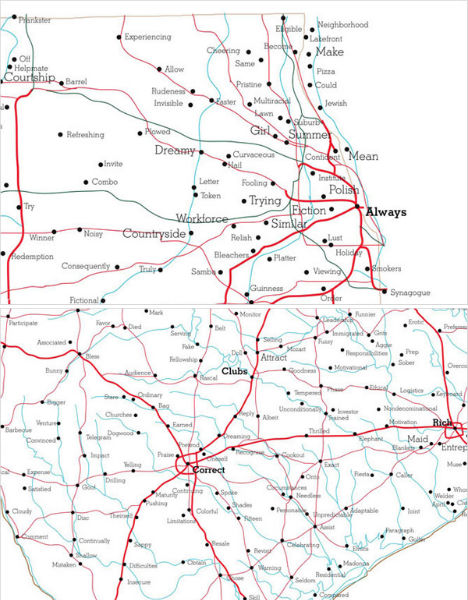 Touching and, at times, hilarious, these keyword maps by R. Luke Dubois associate each town with the terms most often used by locals to describe themselves and their desired partners on their online dating profiles. Dubois joined 21 dating websites and analyzed the language used in 21 million profiles to come up with the data, which was then displayed on maps. Chicagoans say things like “prankster”, “pizza”, “smoker” and “synagogue” while Central Texans are all about “churches”, “boundaries”, “barbecue” and “Madonna” – the latter presumably referring to the Virgin, not the pop star.

The World by Paula Scher 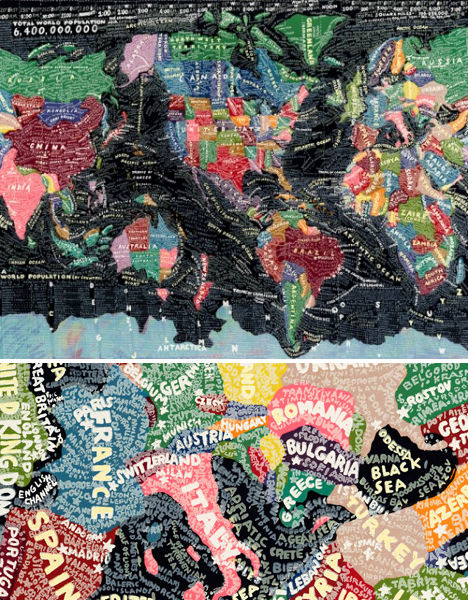 The names of countries, cities and geographical features like deserts and mountains make up the hand-painted text-based map entitled ‘The World’ by artist Paula Scher. “The World is a painting about information overload. It depicts the world as swirling information that is always changing, often inaccurate, while somewhat illuminating. It is expressionistic information.” 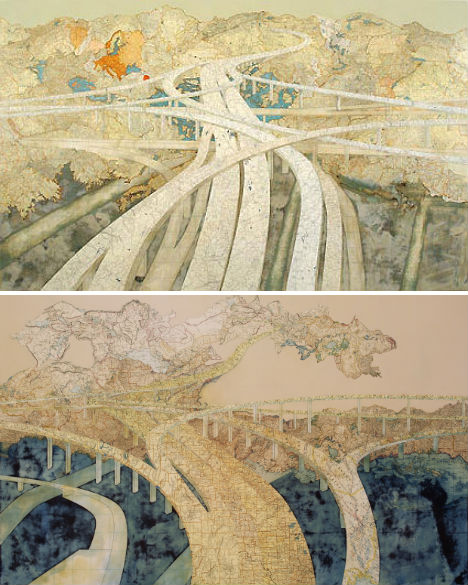 Also by Matthew Cusick are these beautiful maps of roadways that “go nowhere”, weaving and curving around the world. “Maps provided so much potential, so many layers. I put away my brushes and decided to see where the maps would take me. I think collage is a medium perfectly suited to the complexities of our time. It speaks to a society that is over-saturated with disparate visual information. It attempts to put order to the clutter and to make something permanent from the waste of the temporary. A collage is also a time capsule; it preserves the ephemera of the past. It reconstitutes things that have been discarded. A collage must rely on a kind of alchemy; it must combine ordinary elements into something extraordinary.” 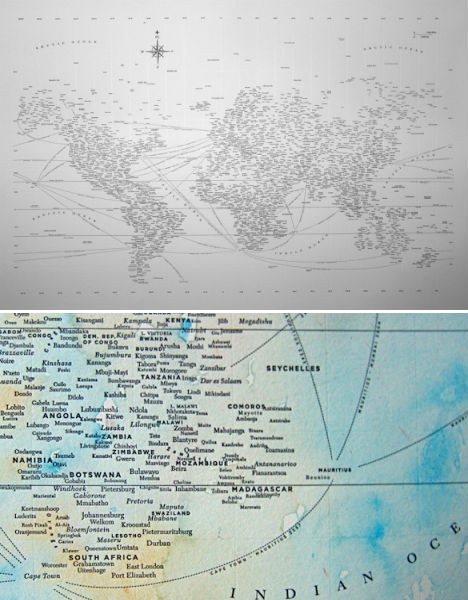 Nothing but text – and, in some cases, dreamy splashes of watercolor paint – make up these hand-crafted world maps by Chicago-based designer Nancy McCabe. So minimalist, and yet there is so much to see – you’ll find yourself reading the names of cities which pop out with new clarity against their stark background. 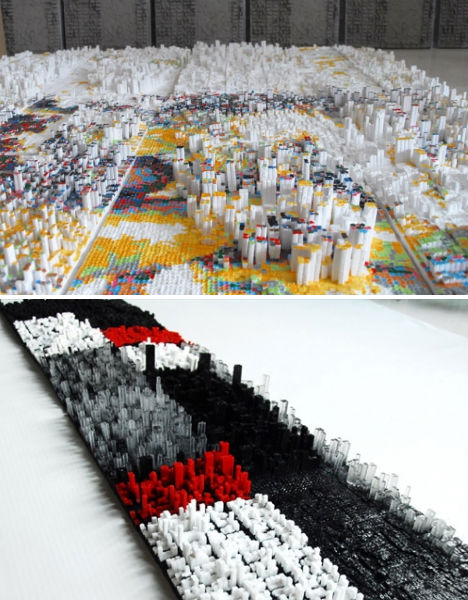 The First Apple series by Ramón Espantaleón is a tribute to New York, particularly in light of the upcoming 10th anniversary of the 9/11 attacks. Espantaleón recreates scale models of the cities in clay, painstakingly constructing each building at 1/65 scale, before using them to cast silicone molds which can then produce recreations made of epoxy resin and polyurethane. Espantaleón, a Madrid native who lived in New York on the day the World Trade Center fell, places these pixelated city blocks onto representations of the Twin Towers. 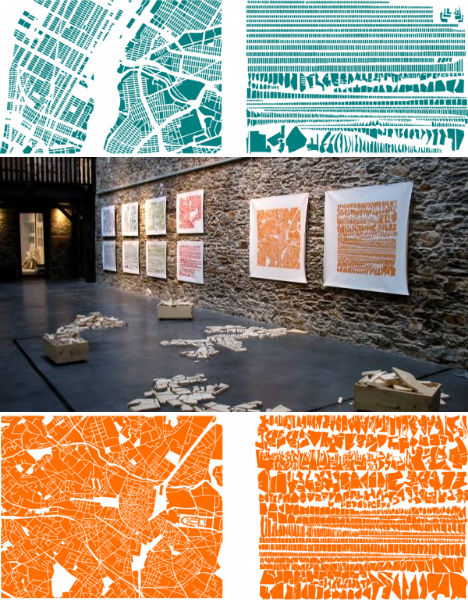 Like meaningless maps for the obsessive compulsive, these works by Armelle Caron take the components that make up a city and lay them out according to size for a more tidy-looking result. The French artist displays the original maps alongside the decontextualized shapes, also providing wooden cut-outs that can be arranged by visitors. 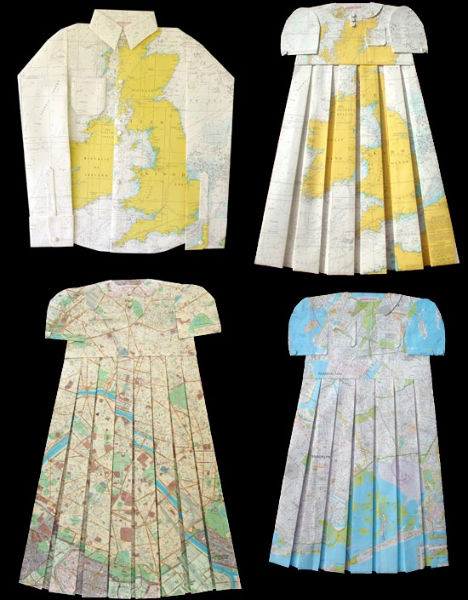 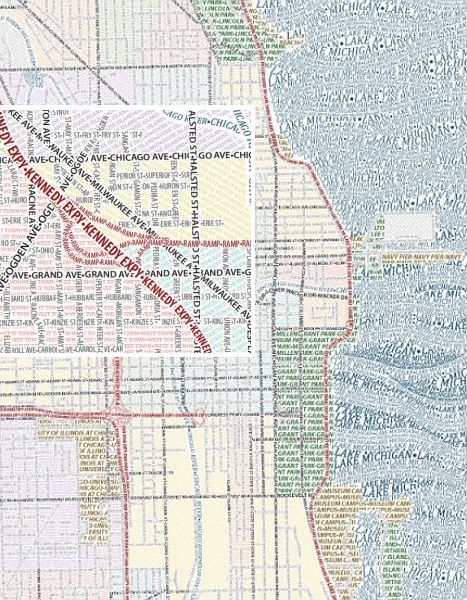 Is it any wonder that some typophiles are so obsessed? Typography, often beautiful and evocative in itself, provides the basis of yet another map, this one of Chicago, created by Axis. Thanks to the colors chosen for various elements, from afar, they look like normal maps, albeit with a bit of artistic flair in the wavy sea. 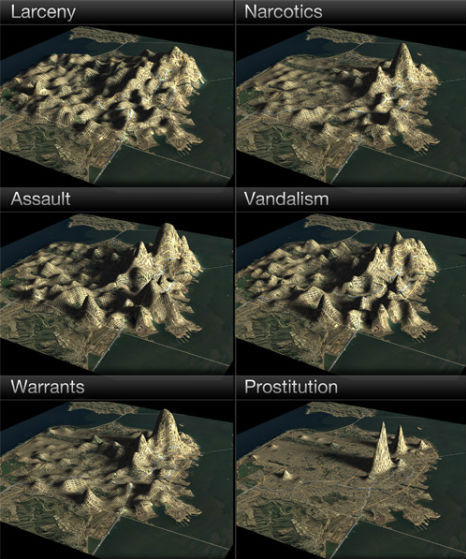 From WebUrbanist: “Who knew that San Francisco had a mountain called ‘Prostitution Peak’? Such hidden ‘landscape features’ are revealed when the city’s crime statistics are analyzed as a 3D topographic map. Data visualization engineer Doug McCune shows how the city’s notorious hills can shift according to the type of crime, from larceny and vandalism to robbery and assault.”

Patterns in Pieces of Maps 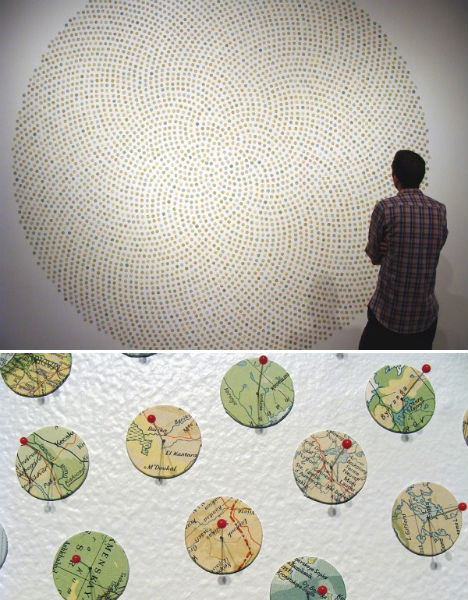 Maine-based artist Shannon Rankin uses little discs of maps to create installations, collages and drawings “that use the language of maps to explore the connections among geological and biological processes, patterns in nature, geometry and anatomy. Using a variety of distinct styles I intricately cut, score, wrinkle, layer, fold, paint and pin maps to produce revised versions that often become more like the terrains they represent.” 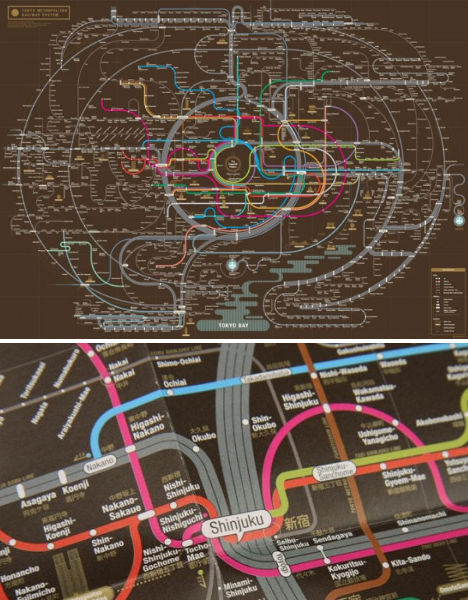 This is one transmit map that you’d likely be more than happy to frame and hang on your wall. Seoul graphic designers Zero Per Zero create colorful abstract compositions of the metro systems in Tokyo, Osaka, New York City and other cities around the world. 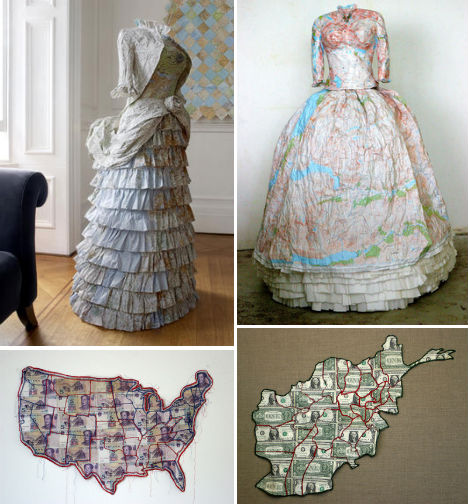 UK artist Susan Stockwell uses maps to craft stunningly detailed dresses, often with political implications; the dress on the left is ‘Empire Dress’, a Victorian style created with maps of the British Isles, while the right-hand ‘Highland Dress’ depicts a traditional Scottish style made with maps of the Highlands. Stockton also creates ‘money maps’ including ‘America is an Imperial State’, left, made with Chinese yuan, and ‘Afghanistan – A Sorry State’, made with American dollars. 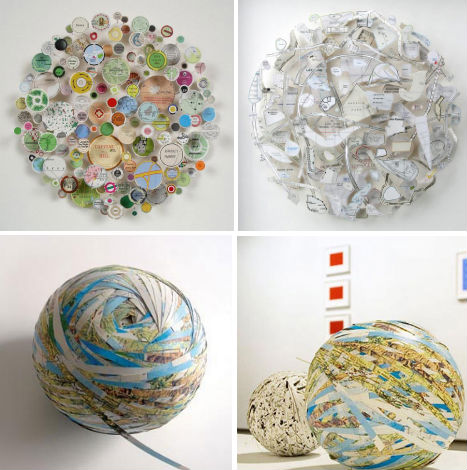 Chris Kenny fashions scraps of maps into complex three-dimensional forms, reducing entire continents to strange shapes hung on a wall or turning flat images of the world into globes. Kenny says he replaces “the cartographer’s logic with an absurd imaginative system. The roads float and interact in unlikely combinations that allow one’s mind to ricochet back and forth between disparate locations and associations.”