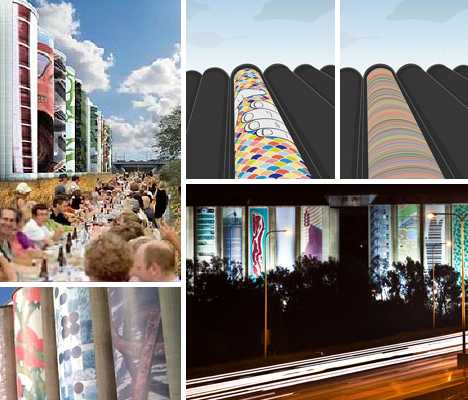 A too-big-to-demolish, multi-silo grain elevator in downtown Omaha, Nebraska, has been given an a-maize-ing makeover thanks to Stored Potential, an ingenious visual project that will give local artists both amateur and professional some truly towering exposure. 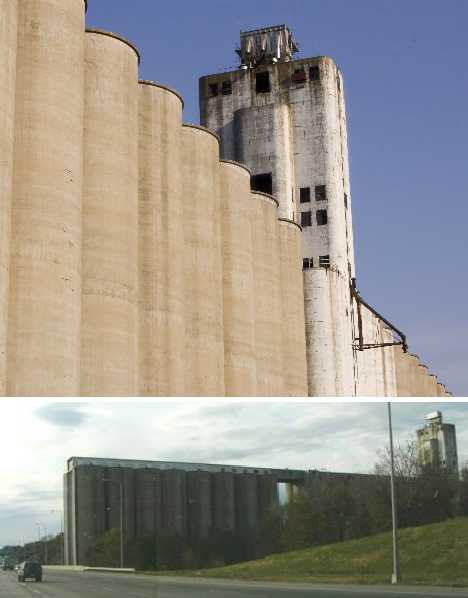 (images via: The Reader and TownCommons)

How does one re-purpose a huge, abandoned, mid-20th-century grain elevator? The question looms ever larger when the grain elevator in question squats a mere stone’s throw from Omaha, Nebraska’s city center and is seen by an estimated 76,000 highway commuters each and every day. 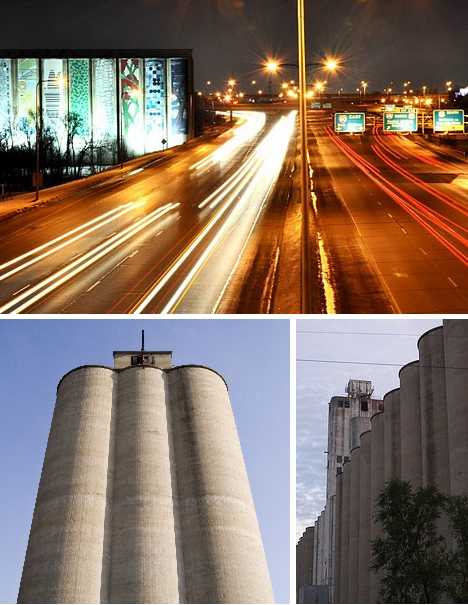 (images via: Papparazzi, The Reader and Admiral58)

Enter Emerging Terrain, “an educational non-profit research and design collaborative.” Make of that what you may, but the organization has achieved great success in marshaling governmental, corporate, educational and artistic forces to create works of enduring visual value where there was once only dereliction and decay. 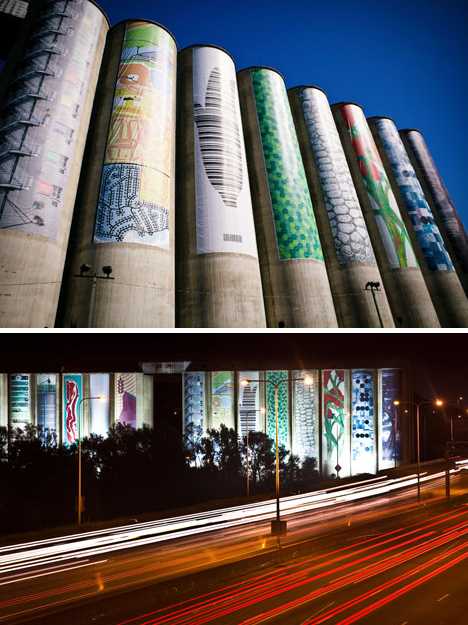 Such was the case of the massive grain elevator complex that sits cheek-by-jowl with I-80 in downtown Omaha. Disused for decades yet too strong structurally to be easily (and cheaply) demolished, the nearly two dozen silos were becoming the kind of eyesore even Omaha’ans long-accustomed to tuning them out could no longer ignore.

A Banner Day For Omaha 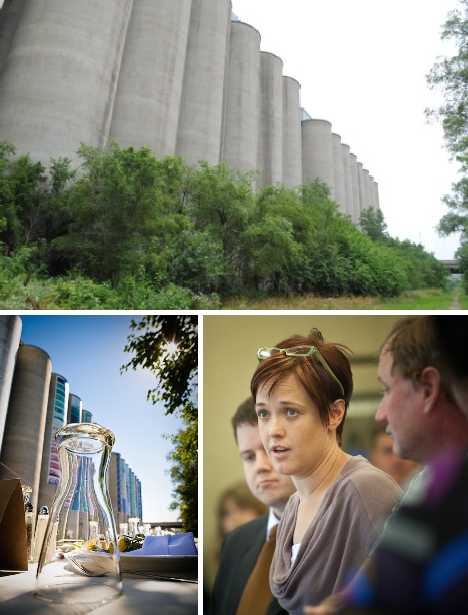 Anne Trumble (above, right), Founder of Emerging Terrain, came up with an effective solution to this case of visual pollution: ask local artists to create and submit artwork with an agriculture-related theme, suitable for blowing up into removable banners to be draped down the sides of the silos. And so, Stored Potential was born. 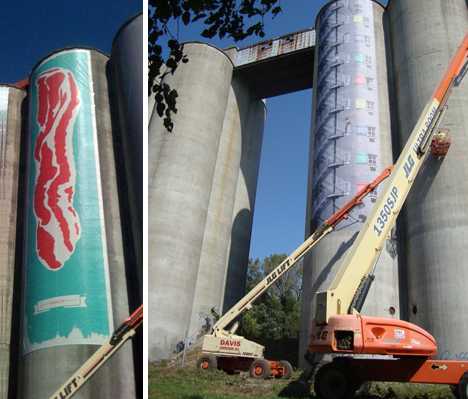 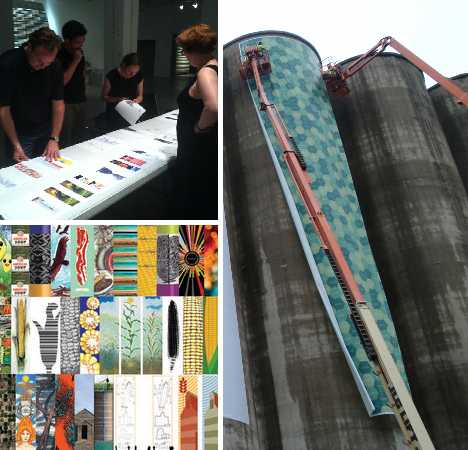 (images via: Emerging Terrain Blog and Four Eyes Are Better Than Two)

Trumble had to be pleased and astonished at the response: roughly 500 submissions were received and the real difficulty was choosing just 13. 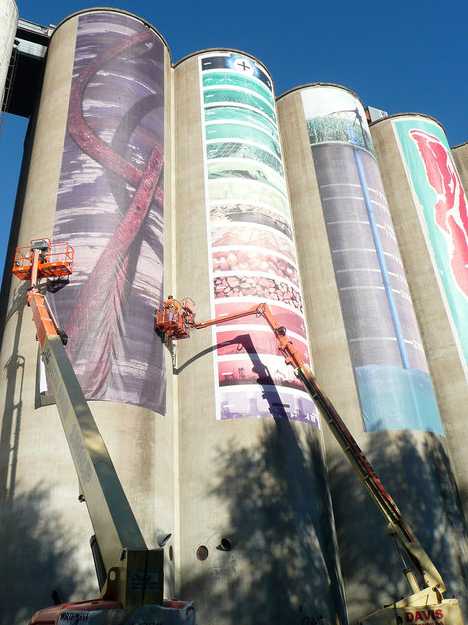 On the bright side, having so many submissions to select from allowed for a wide-ranging variety of subjects and styles to appear on the 20′ x 80′ woven poly-mesh panels which were securely fastened to the individual silos. 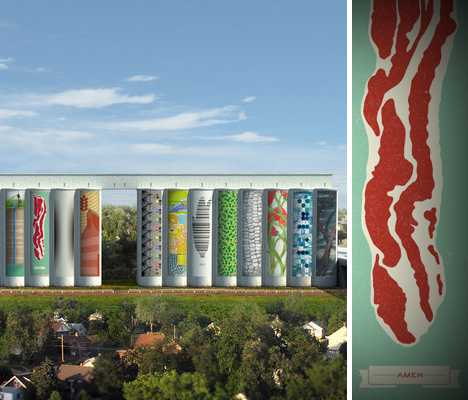 (images via: Four Eyes Are Better Than Two)

Only 13 of the two-dozen silos at the grain elevator, those closest to I-80, would be graced with the artistic panels but the total area displayed works out to approximately 22,000 square feet. That’s a lot of art! Among the chosen works was “Bacon/Amen” by M. Brady Clark, a stylized strip of marbled Nebraska bacon set against a complementary mint green background. Mmm, bacon… 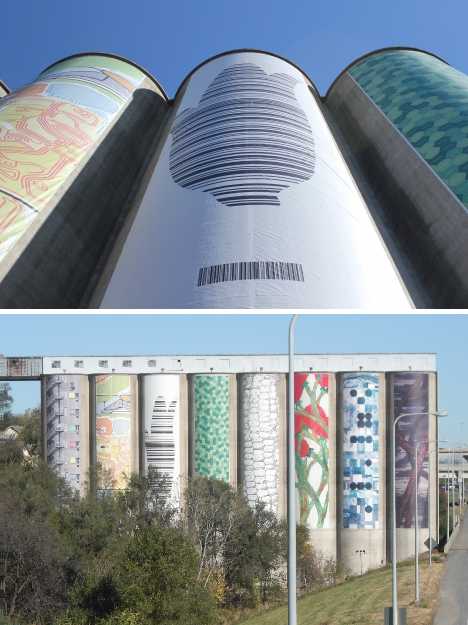 (images via: The Re-Picturing Extraordinary Women Project and Brownfield AgNews)

Stored Potential was always meant to be a semi-temporary exhibition – after 3 or 4 months, the banners were to be taken down and distributed to other grain elevators across Nebraska. Following this “grained tour”, the banners would return to their original stomping grounds to hang on the silos furthest from I-80. That would leave the originally decorated silos bare… or would it? 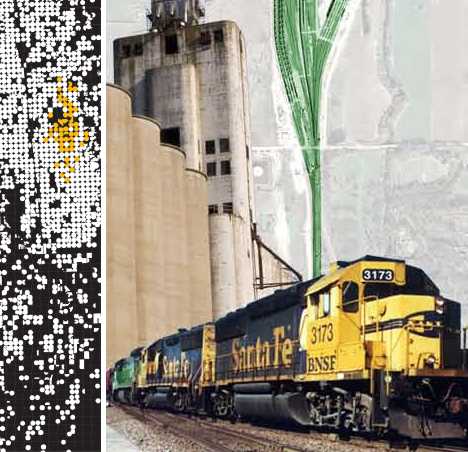 It would not: due to the overwhelmingly favorable reaction to “Stored Potential 1: Land Use, Agriculture, and Food” in 2010, Anne Trumble was authorized to organize a redux of sorts for 2011. “Stored Potential 2: Transport(ation)” involves a similar shout out to local artists for 14 spaces on the I-80 facing tier of silos. One submission (above, left) by Erin & Justin Brouillette displays a portion of the 2005 Nebraska Land Use Map’s analysis of “food miles”, with the 4 percent of locally sourced and used foods consumed by Omaha residents highlighted in bright yellow. Above right is the lower portion of Casey Elmer‘s submission, which likens Nebraska’s rail infrastructure to the appearance of sprouting grain. 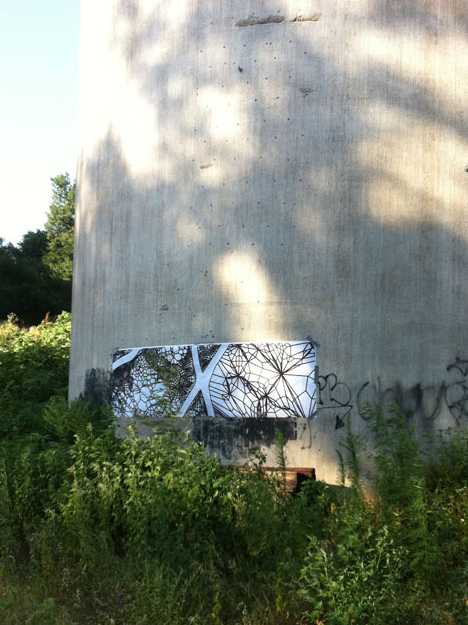 Why transport? “The discontinued silos sit as markers to the ever changing landscape of transport”, as the project brief from Emerging Terrain puts it. “As infrastructural networks advance and improve, the city is forced to confront relics of outmoded situations, ideas, and technologies. What will the future say about our current systems of transport, from the vehicles we drive, the computers we network with, the communication lines that have long accompanied physical infrastructure, and the empty silos we drive by each day?” 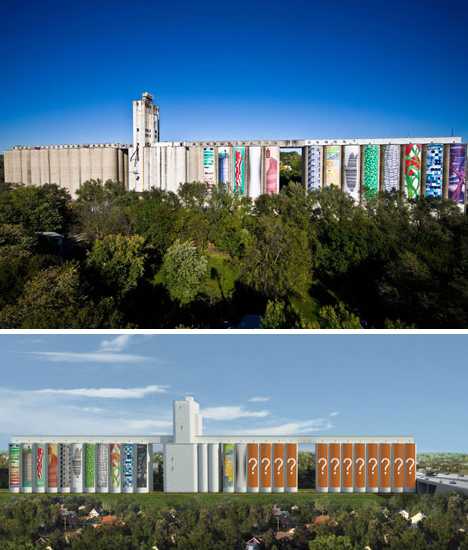 Weather permitting, the second iteration of Stored Potential will enliven the sides of another dozen or so silos in early October of 2011. It won’t be long before legions of photographers, bloggers and mainstream journalists document what has to be the biggest thing to hit Omaha since the Great Flood of 1881. Stay tuned to WebUrbanist for a follow-up post, copiously illustrated for your pleasure!