The Germans have a dark joke about their low-water-consumption, eco-friendly toilets and cultural history, which goes something like this: you have to look at your garbage before you get to flush it away. Along similarly macabre lines, this so-called Monument to Civilization project proposes erecting giant buildings made of refuse. On the bright side, these trash towers could help power the cities they are built in as well. 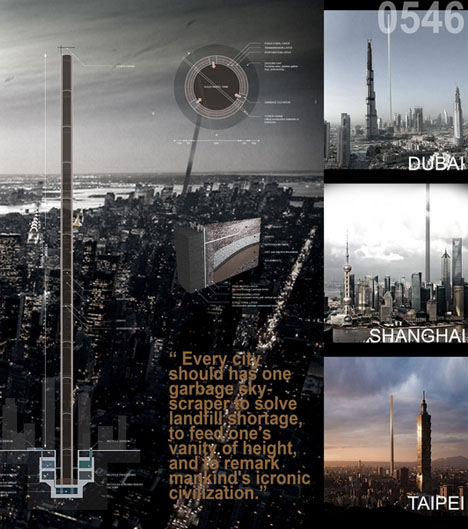 Instead of burying our legacy under the Earth’s surface, these structures conceived of by (award-winning designer) Lin Yu-Ta showcase the impact of the millions of tons of trash major cities produce on an annual basis, which would reach over 5,000 feet if piled high in New York City alone. If architecture is part spectacle, then the full story is perhaps incomplete without something like this on the skyline. But beyond the aesthetic statement, decomposing trash can also create power for surrounding facilities (though in a depressing way, this in turn fuels the cycle of endless garbage creation). 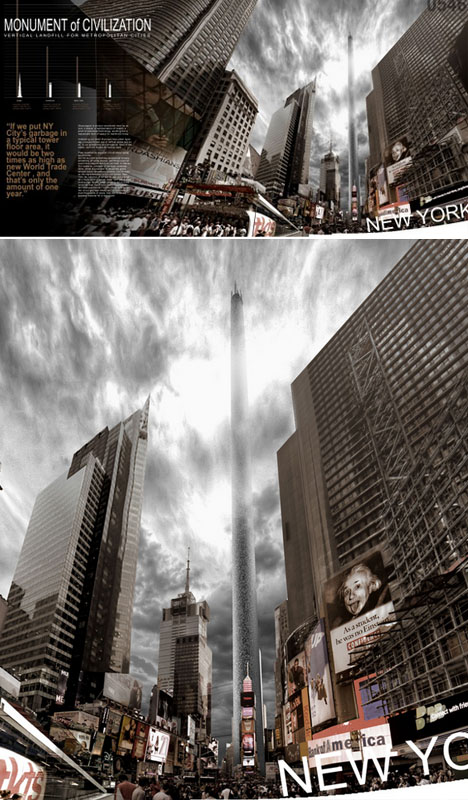 “As landfill possibilities surrounding growing metropolises disappear and cities fight waste management issues, the power of trash needs to be reconsidered. The accumulation of waste, for example, actually creates potential energy-recycle opportunities, such as when gas is emitted during decomposition. The Monument of Civilization proposal suggests locating trash vertically in a tower and using the energy generated from its decomposition to help power the surrounding city. By locating the tower in the heart of the city, energy is provided in immediate proximity, and money is also saved in transportation costs when garbage no longer needs to be shipped out of town.”