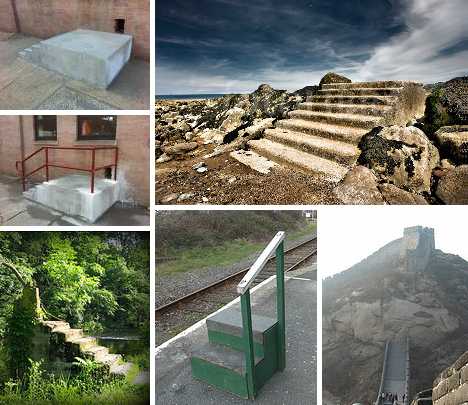 Like a carpenter who makes stairs, I’m always thinking one step ahead. Unfortunately the builders of these 12 strange staircases never arrived at a landing, leaving us to wonder where these spooky steps to nowhere were meant to lead. 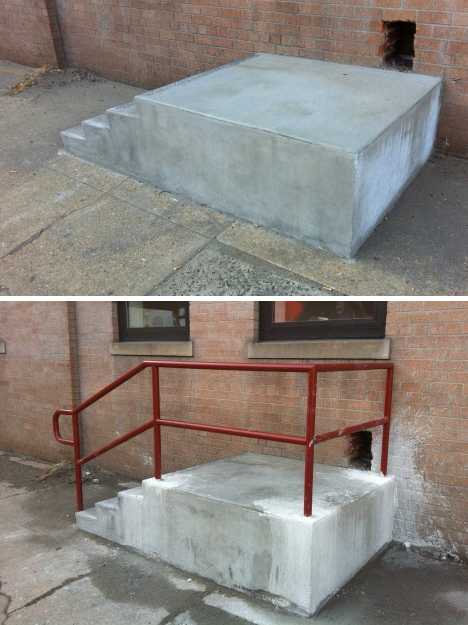 What came first, the building or the steps? It’s not always easy to tell, especially when the only evidence is a photo capturing one moment in time. Then there are situations that demand more complex explanation, like this recently built set of steps in NYC’s borough of Queens. In a graphic illustration of your tax dollars at work, city authorities installed handrails around the seemingly purposeless steps in the interest of public safety. 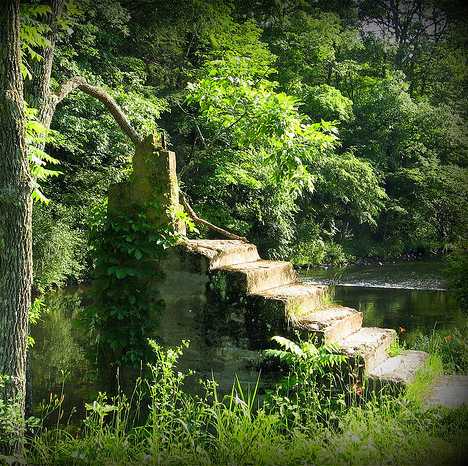 The exquisite photo above features a long-lost set of stairs leading to what must have been an even more long-lost home in the scenic Delaware Water Gap area. Almost post-apocalyptic in its serene, overgrown beauty, these sturdy steps once bore the treads of laughing children, weary farmers and the determined women who kept the former fed. 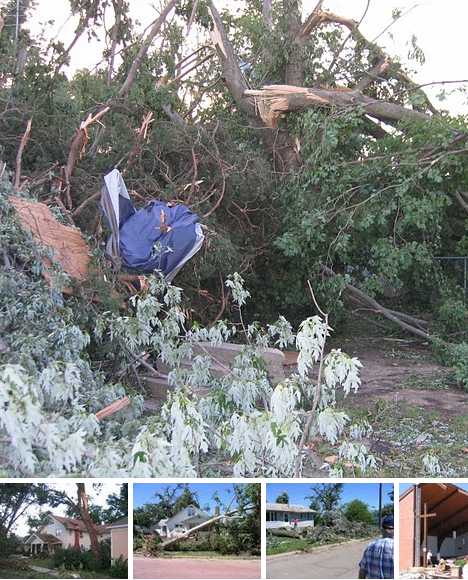 The photos above bear witness to the devastation caused by an F3 tornado which struck the town of Chapman, Kansas, on the evening of Wednesday, June 11th, 2008. While the result above may superficially resemble the ancient stairs of the Delaware Water Gap shown previously, it’s sobering to note that Mother Nature took only a few seconds to create a similar tableau at Chapman. 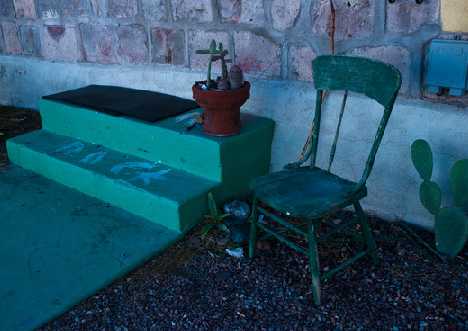 So you’re hankering to do the Tennessee Two-Step but you’re stuck in the American Southwest? No problemo, pardner, Tucson’s got just what you need. This short set of stairs – 2 being the minimum required to make a staircase – isn’t good for much except holding up cactus. Haters might say that’s the main purpose of Tucson itself. 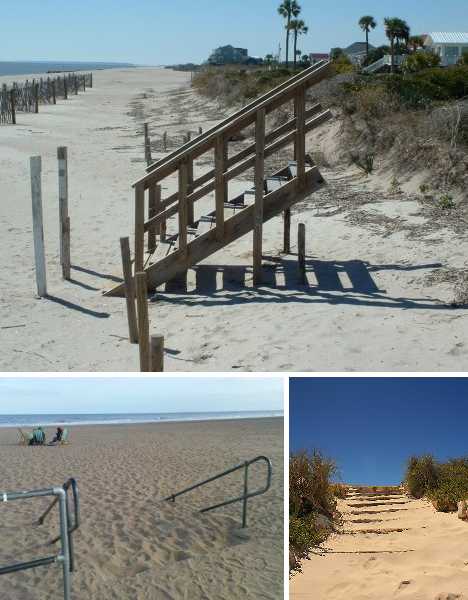 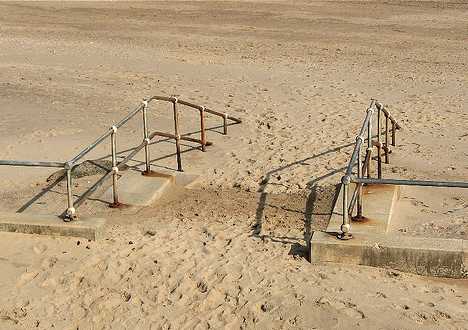 (images via: RedGage, Reading the Arcades, Elaine Teague and Lincolnian)

Beaches are the perfect place to find solitary staircases, as structures built at the border between sea and land often come up short when push comes to shove. Whether subsumed by shifting sands or survivors of storms and storm surges, the coast is the most for a host of staircase ghosts! 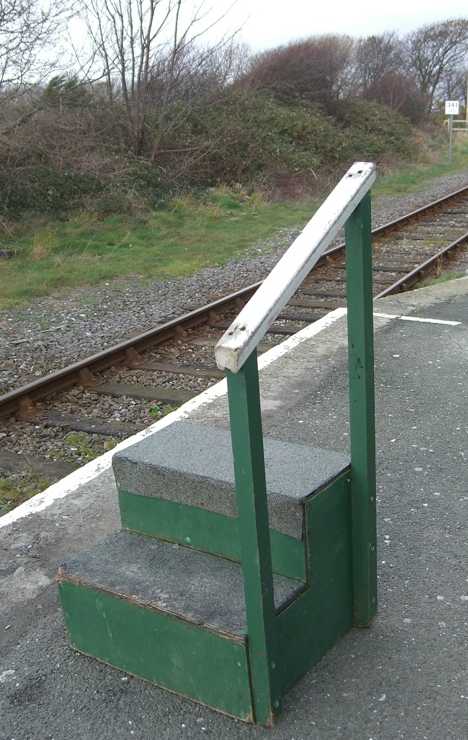 You’d best not get lost in Wales, lest you end up having to ask a local where “Llwyngwril” might be found and dislocate your tongue in the process. Painful as that sounds, it’s nothing compared to the faceplant you’ll take after jogging up this senseless staircase at Llwyngwril station… handrail included for your protection. OK, I can see that this could be a portable staircase that railway staff would place at the train’s exit doors each time it pulls into the station, but what fun would that be, hmm?

End of the Shoreline 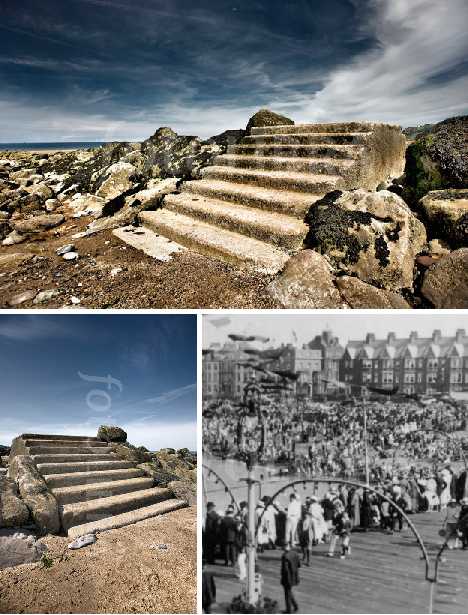 Colwyn Bay in North Wales has seen better days, and this weathered & forlorn solitary staircase dates from those times when Victorian bathing beauties dipped their tender toes in the chill surf of the Irish Sea. These brilliant images from David Johnson highlight the rough texture of the stairs against the deep eternal blue of the Welsh sky, giving the scene a timeless quality. 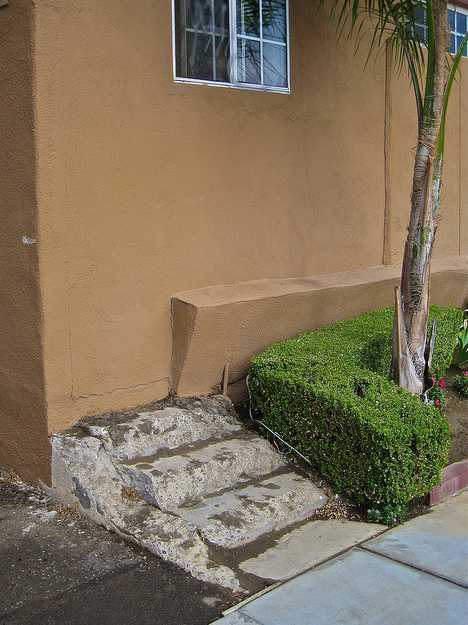 According to the photographer of the above image, Robby Virus, these are “Steps leading right into a wall in Fresno, California. Not sure what’s going on here.” Neither am I, Robby, neither am I… but sometimes, my friend, ignorance is bliss. 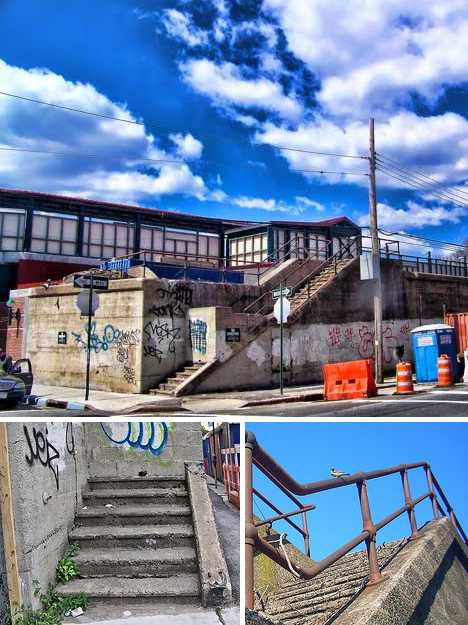 If you’re in a hurry to catch the Long Island Railroad’s Q Train at the Neck Road station on Gravesend Neck Road and East 16th Street, be sure to keep your head up as you ascend the stairs – or your trip may come to a sudden, painful end. The flight of concrete steps appears to run straight into a wall of concrete blocks ala Harry Potter but it wasn’t always that way: these steps served foot traffic to and from the old Sheepshead Bay Race Track from 1893 to 1924. 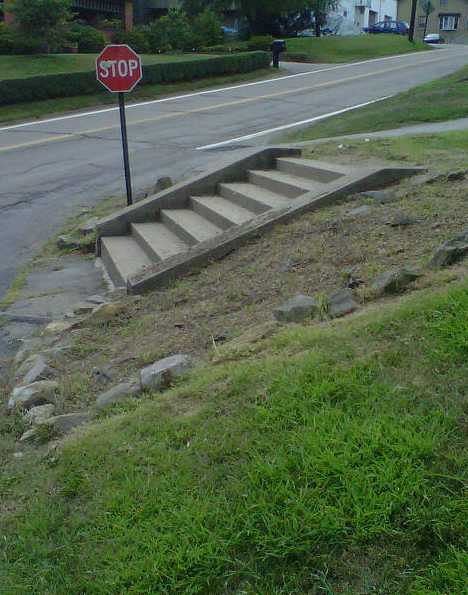 They say old soldiers never die, they just fade away. That’s also the case with war memorials, it seems. These steps to nowhere in Ligonier, PA, are said to be all that remains of an old war memorial. These days, the steps serve a less glorious but still important purpose: giving students a place to stand while waiting for the school bus. 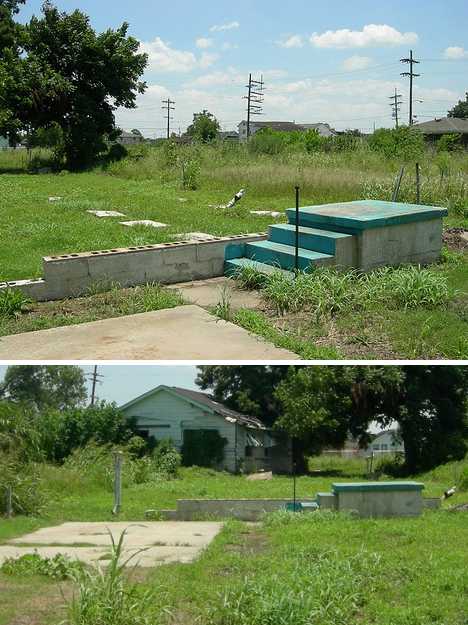 (image via: The Tablehopper)

Sometimes the story behind a set of solitary stairs IS known, and usually it’s not a happy one. Such is the case with these meager remains of a home in New Orleans’ Ninth Ward, struck first by Hurricane Katrina’s howling winds and then submerged beneath the devastating storm surge. As is the case in many natural disasters, solid concrete fixtures like porch steps are about the only parts of a house that can stand up to the fearsome forces of nature. 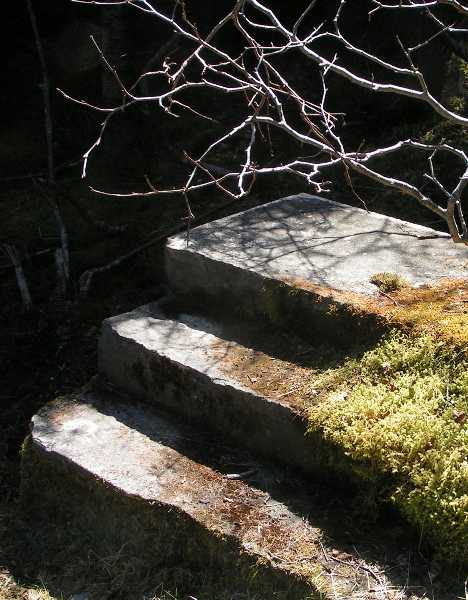 (image via: ILLUSTRATED LIFE and the Art of Jeanette Jobson)

Though they may exist in splendid isolation, so-called “stairs to nowhere” will always seem somehow incomplete without the supporting context they were designed for. It’s this sense of wanting, perhaps, that evokes a chord in viewers who may see themselves as also incomplete and as such, identify with these staircases on a certain psychological level. Unlike these inanimate stairs, however, people have the ability to change their circumstances and successfully strive to complete themselves. Look within yourself and wonder… isn’t it time to step up?