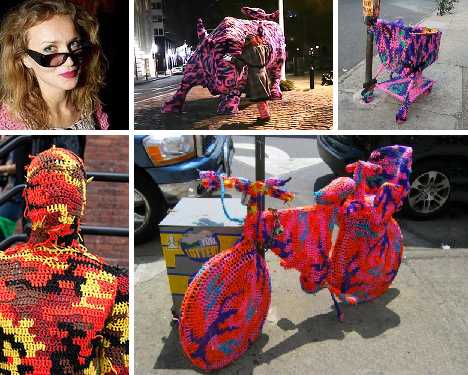 When it comes to knit graffiti, yarn bombing or urban knitting, New York City-based artist Agata Oleksiak (known as Olek) has got it all sewn up! The Polish-born queen of crochet specializes in brilliantly colored, large-scale knit-stravaganzas that add new life to an oft-drab urban landscape.

A Kick in the Crochet 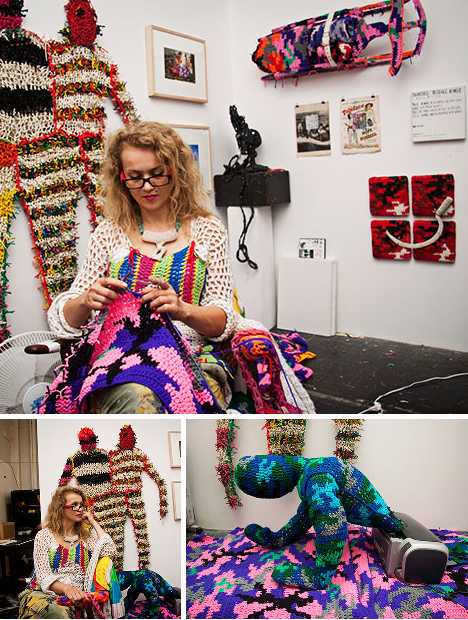 Yo yo yo, mah knittas! Olek is in da house… sitting quietly, knitting seriously, day after day after day. It may sound like a tedious, monotonous, stultifying existence but Agata Oleksiak (Olek, for short) begs to differ. “I can be found in my studio with a pile of movies to watch and a bottle of spiced Polish vodka, aggressively re-weaving the world as I see fit.” Knit one, pearl two, drink three, repeat!

Here’s an introductory video about Olek, starring and narrated by the artist herself: 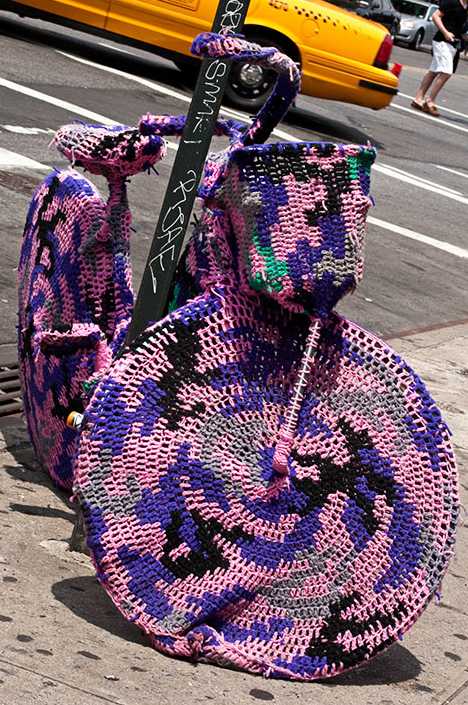 The Olek-ized bicycle above illustrates Olek’s unique style, which seems to meld CAD camouflage with 8-bit imagery. Practical? As a bike, no, but as an art object it’s practically outrageous! 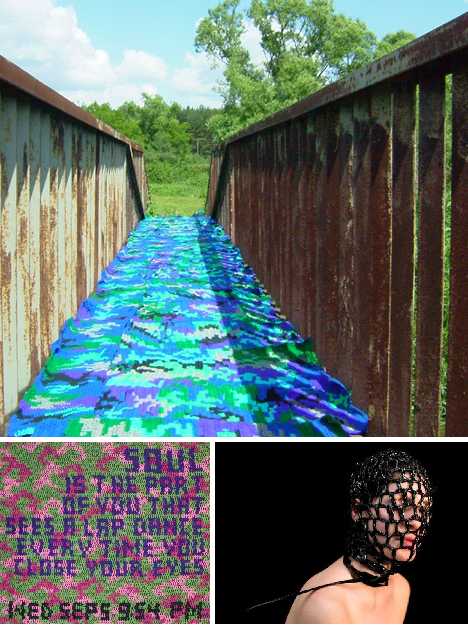 (images via: The Rayograph and SAIC Art Education)

Born and raised in communist Poland, one imagines the now 33-year-old “yarntist” longed for bright, vivid colors to illuminate the drab confines of pre-Solidarity Silesian society. When communism fell in 1989, life suddenly presented unlimited opportunities to young Agata. Remember the scene in The Wizard of Oz when the four travelers embark upon the Yellow Brick Road as the world around them bursts into technicolor? Agata Oleksiak lived it, and her road was made from yarn. 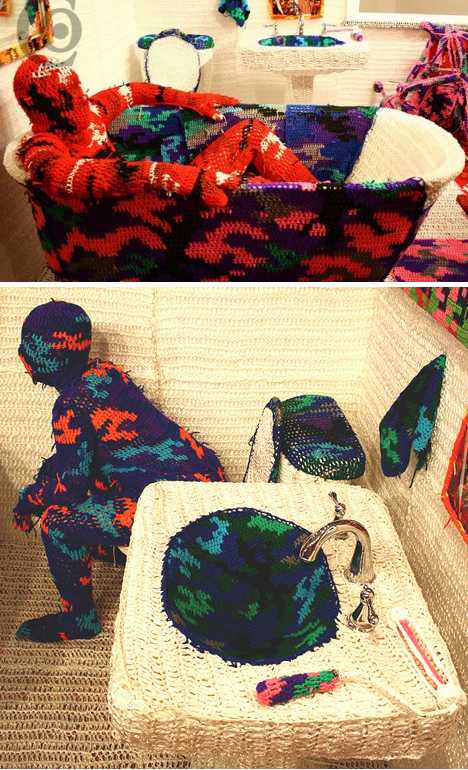 Not just the road, either. Olek aims for quality and on occasion, quantity: such as the entire apartment decked out in knitted yarn, including the residents. Hey, it beats mold plus it’s slightly more colorful. 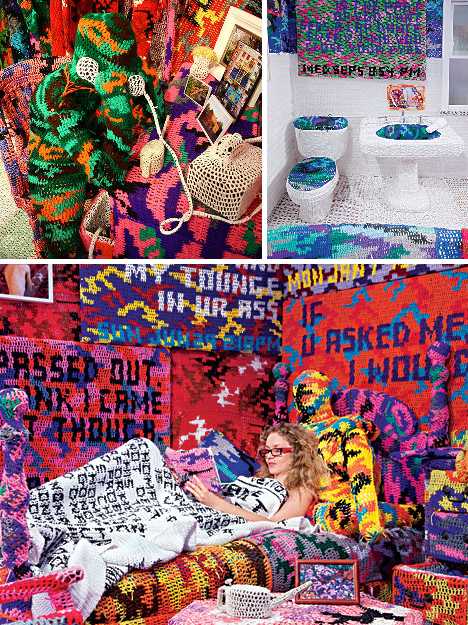 (images via: Jeremyriad and Cak Zud)

The human templates who volunteered to be a physical part of the project were presumably advised to take bathroom breaks beforehand – Olek sewed them into their knit suits without the use of buttons, zippers or fasteners of any kind. 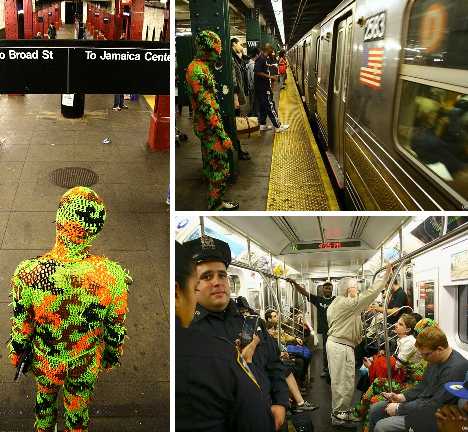 Interviewing Olek can be somewhat of an adventure, especially if you get dragooned into becoming a piece of performance art. One “lucky” reporter found himself sewn into a crocheted skin, then sent out to ride the New York Subway. All things considered, it’s doubtful anyone noticed. 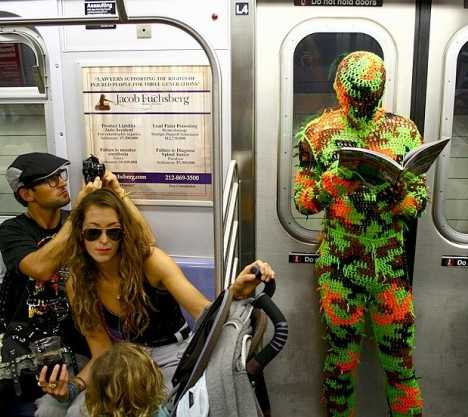 Just another day, another crazy dude on the subway… where’s Bernhard Goetz when you need him?

The Yarn to Travel 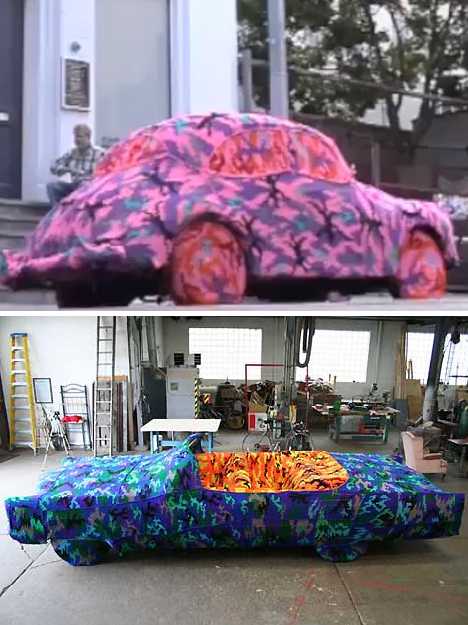 (images via: AutoBlog Canada and Lost at E Minor)

Not satisfied with sweaters, scarfs, baby booties and the like, Olek prefers to think big… REAL big. Like cars, for instance. No, not gearshift covers or seatcovers, more like car covers. Such all-inclusive art has its pitfalls, however; convertible owners shouldn’t even think of raising or lowering the top. 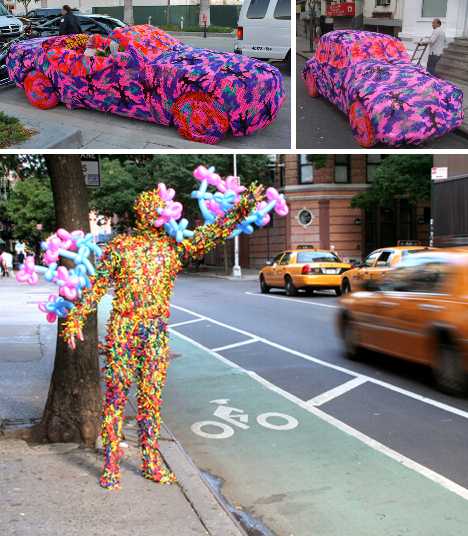 (images via: Things I See, Bowery Boogie and Ignite Licensing)

Cars are an integral part of the New York City ethos but by swathing cars in yarn and adding the essential human element, Olek changes what was animate inorganic into inanimate organic. 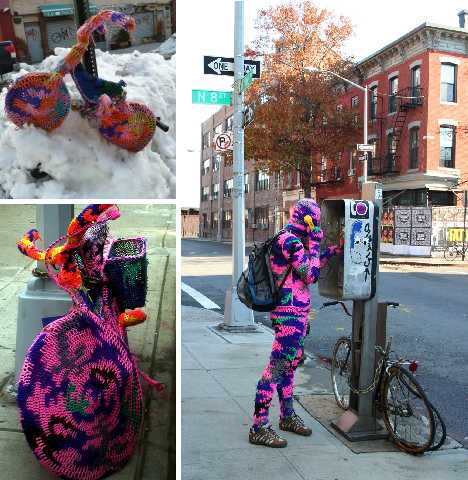 (images via: According to G, Body Pixel and The Googly Eye Cru)

Four wheels good, two wheels… also good! Having lived and worked in NYC for over a decade, Olex is intimately acquainted with all forms of urban transportation. Bikes have been “needled” by Olek numerous times and the results never fail to spoke, er, spark amusement and bemusement. 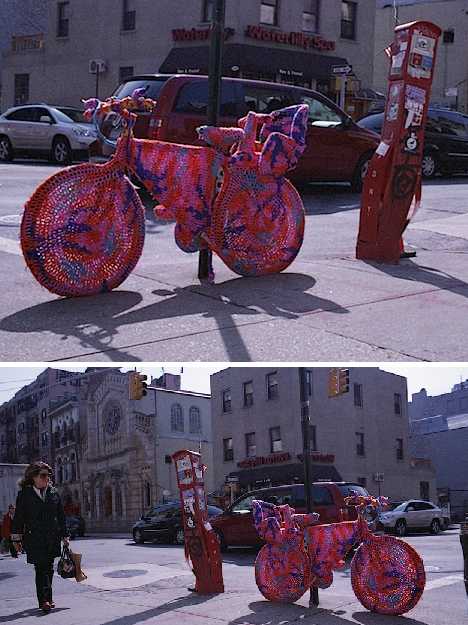 (images via: Street and Stage)

Street pedalers, in my New York City? Thanks to Olek, it’s more likely than you think. One wonders, however, how long Olek’s open-air artworks remain untouched and unmolested in the Big Apple’s urban milieu as her fame (and prices for her art) continue to rise? 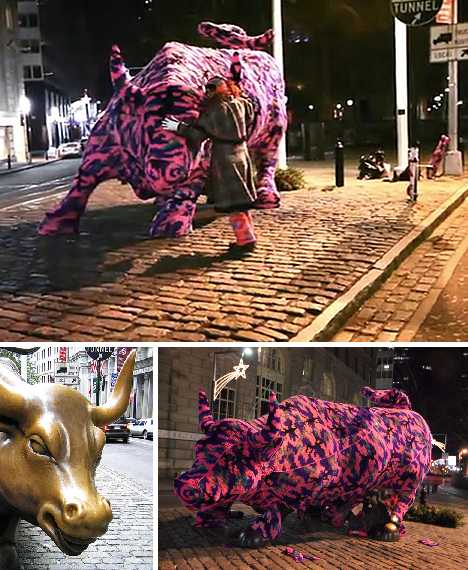 (images via: FreshnessMag and Downtown Traveler)

Perhaps Olek’s most notorious example of urban knitting is the Great Wall Street Coverup… no, not that one, THIS one! Put in place beneath a snowy December sky on Christmas Eve of 2010, Olek’s extreme makeover of Wall Street’s Charging Bull is cool enough to warm the iciest broker’s heart. 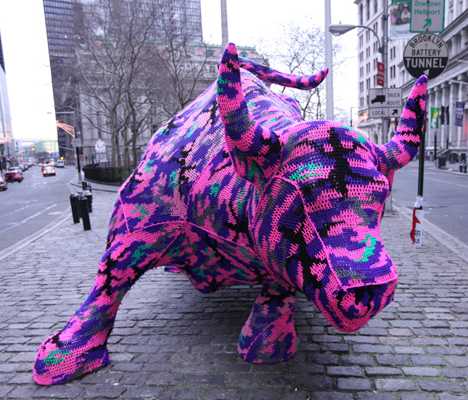 We’ll let Olek explain the whys & wherefores of the Bull’s Pyjamas in her own words: “It was truly a year of guerrilla actions that opened a new path in my crocheted investigations. I started it with a bike and ended up with the Charging Bull as a Christmas gift to NYC and a tribute to the sculptor of the bull, Arturo di Modica, who in another guerrilla act, placed the bull on Wall Street in Christmas of 1987 as a symbol of the ‘strength and power of the American people’ following the 1987 Stock Market crash. This crocheted cover represents my best wishes to all of us. It will be a great, prosperous year with many wonderful surprises!!!” 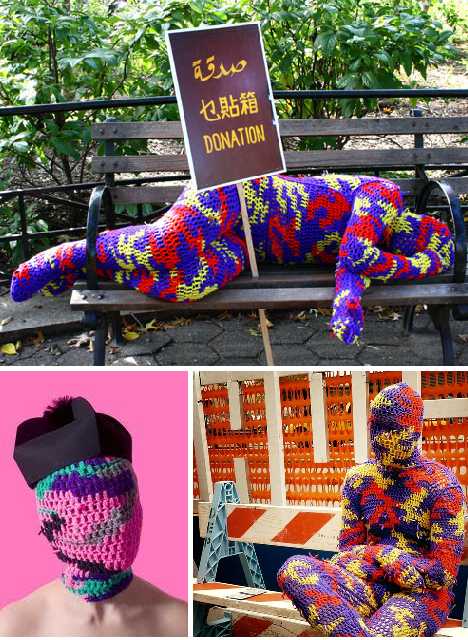 (images via: IDN World and ArtLog)

The human element lurks at the heart of all Olek’s artworks, even those in which no human form appears. When people become part of her art, Olek hides all overt hints of their humanity but there’s no denying the life and warmth at the center. 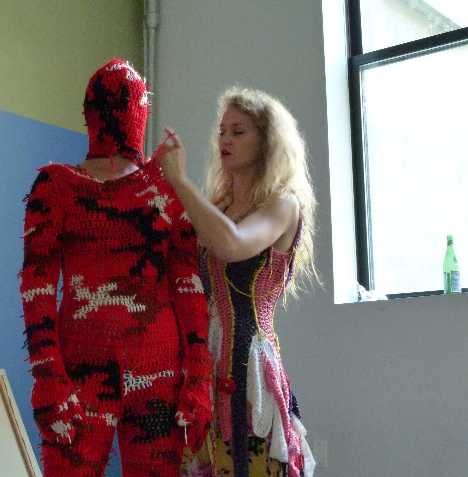 (image via: According to G)

Volunteers who have undergone the “Olek treatment” find the experience almost indescribable. Feelings of constriction and claustrophobia rub shoulders in the mind with the safe and secure sense of shelter and support engendered by the all-engulfing yarn. Is Olek trying to tell us something about the two-faced nature of modern society? 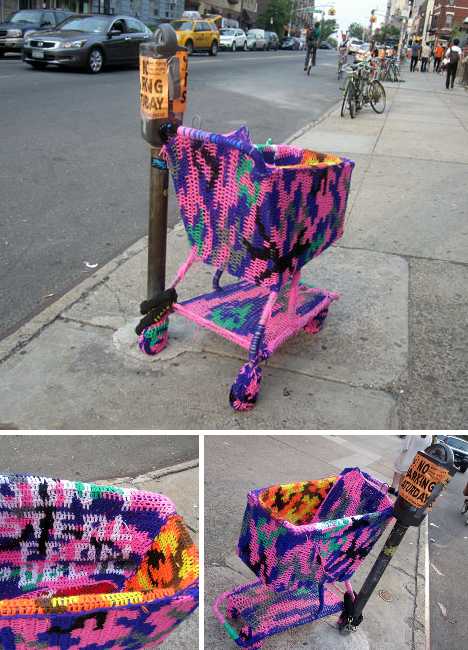 Olek remains enigmatic, speaking volumes without impinging upon the listener’s right to form their own conclusions. “A loop after a loop. Hour after hour my madness becomes crochet. Life and art are inseparable. I crochet everything that enters my space. There is the unraveling, the ephemeral part of my work that never lets me forget about the limited life of the art object and art concept.”