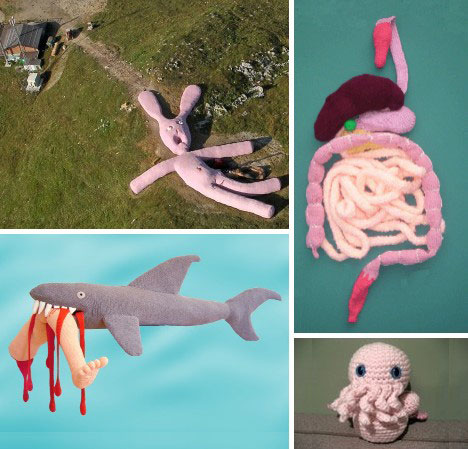 If you thought knitting was a hobby only suited for the bored, the boring and the borderline senile, think again. It takes plenty of smarts to be a knit-wit and these 15 crafty creations prove those who wield the needles are anything but woolly-minded. 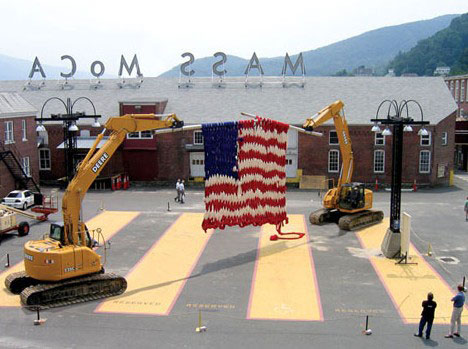 Dave Cole thinks knitting is going to be big someday, but he’s not waiting for that day to come. Instead, Cole uses unusual materials and inflated scales – as in the Construction Knitting piece shown above. Cole employed a pair of John Deere excavators and custom-made, 2-foot long knitting needles to create the jumbo-sized American flag in time for 4th of July celebrations in 2005. 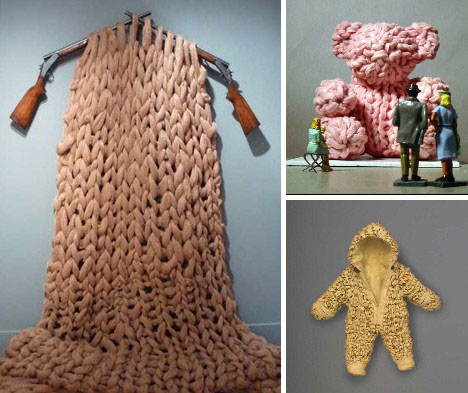 (image via: The Knitting Machine)

Cole continues to tour the art exhibition circuit, showcasing what he calls “Radical Lace and Subversive Knitting” and adding to his extensive portfolio. Consider the baby’s snowsuit made from a recycled, hand-knitted Gulf War kevlar bulletproof vest and you’ll get an idea of what Cole’s getting at. 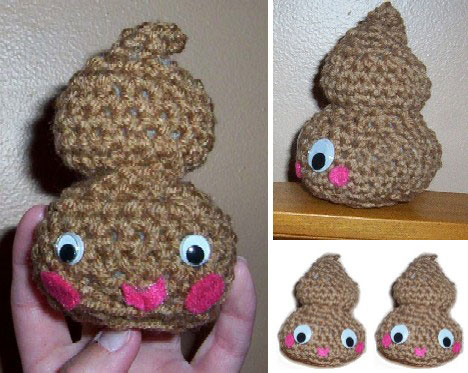 Tell Naida you don’t like her knitted crap and you might just get a needle where the sun don’t shine. Ordering one of her poop plushies is another story, however. As for WHY you’d order one (or more), one source suggests it “makes a nice potty training helper.” Those not into traumatizing their kids might use it as a toilet paper cozy. 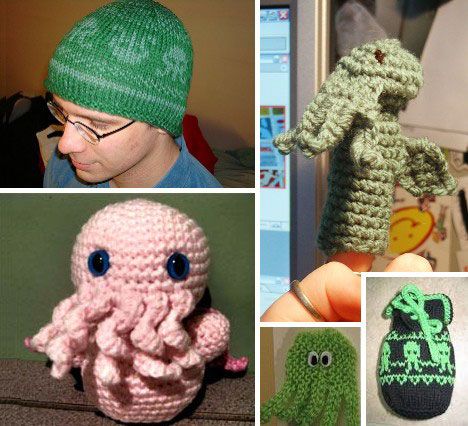 It may be that some knitters wish to weave weirdly – call it Anti-Knitting for want of a better term. Some go for horror, and what could be more horrible than Great C’thulhu, dreaded leader of the Great Old Ones from writer H.P. Lovecraft’s famous yarns (sorry)? The above selection of knitted C’thulhus (C’thulhi?) look to have leaped directly from the needles of Morticia Adams – though they’re really kinda c’ute. 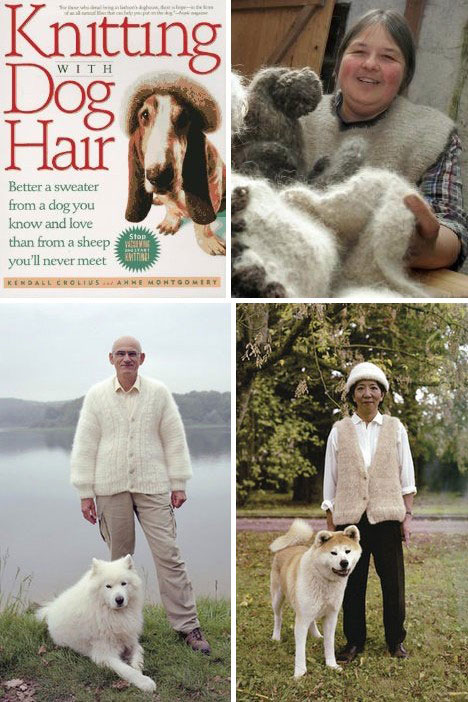 “Better a sweater from a dog you know and love than from a sheep you’ll never meet.” So true! And, eminently practical – why vacuum up shed dog hair when it can be knitted into an arf-arf scarf? Sure it seems wrong on several different levels but there’s no law against it – besides, people wear human-hair wigs. 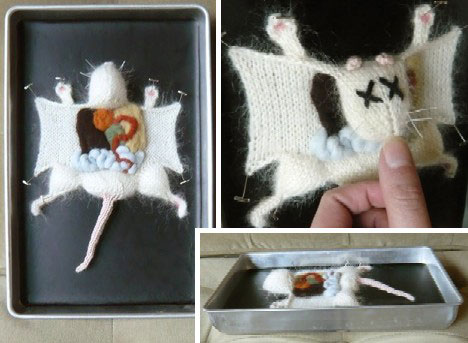 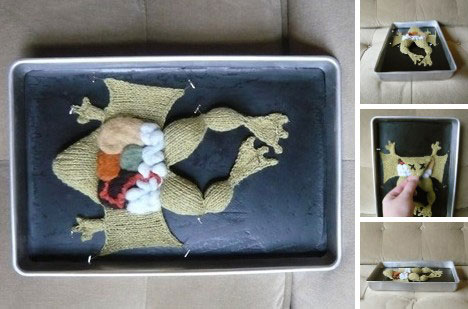 Both the lab rat and frog (above) gain an extra shot of realism through their being mounted on actual aluminum dissection trays lined with black wax. The trays are new of course, anything else would be gross. 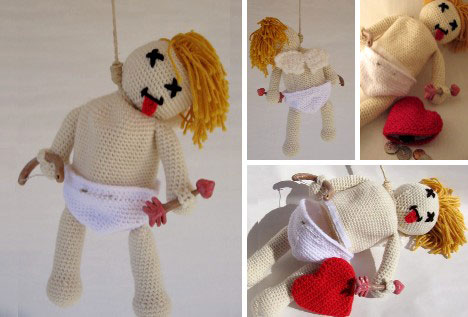 Cupid’s arrow missed the bullseye – again? Got a hate on for the heart man? Get revenge on the bowman of romance with the Hangman Purse. This cool anti-Valentine’s Day gift comes with a 43-inch noose to hang him high – literally, as it’s made of hemp. 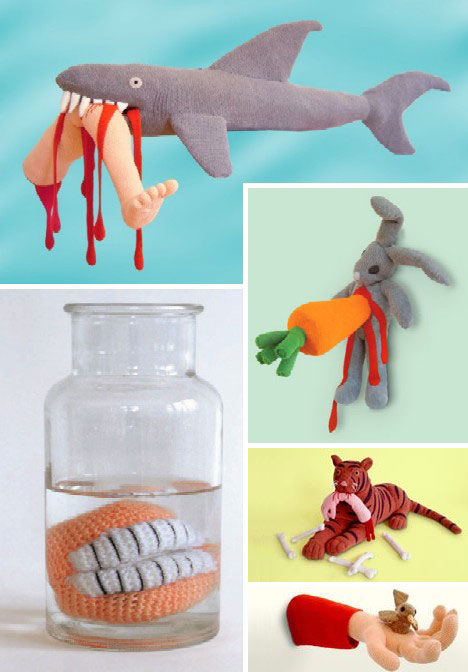 Forgive the play on words, these knit-marish creations by Patricia Waller are safe to see though they depict a number of “accidents” one wouldn’t expect to see portrayed in acrylic & wool. Waller also delves into other somewhat disturbing scenes such as a pair of knitted dentures forever floating in a gelatin-filled bottle. 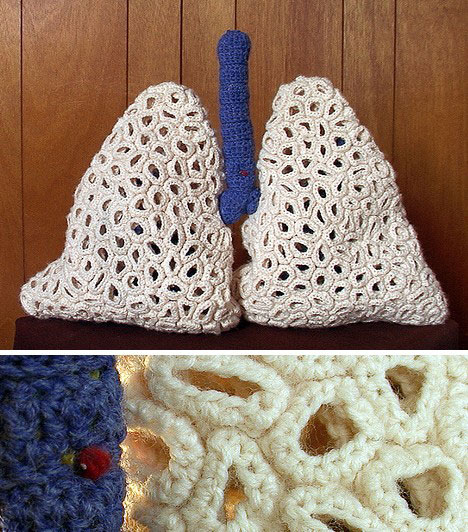 Other woven works that go way, way beyond samplers and quilts include these cozy lungs, obviously from a non-smoker. The artist has taken special care to render the many individual alveoli with great detail, almost as if they had real lungs to observe. 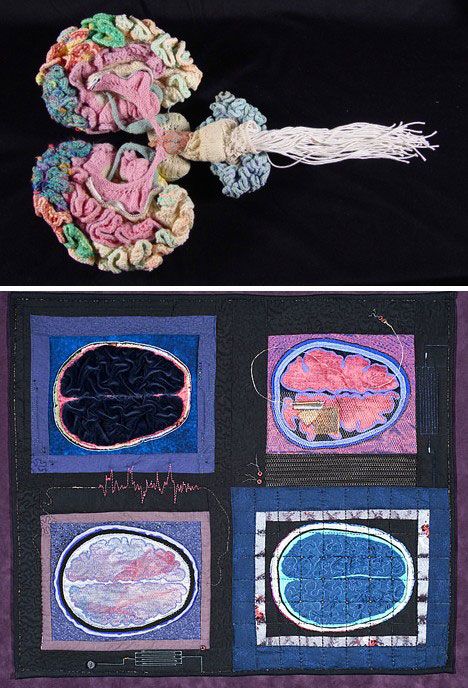 (image via: The Museum of Scientifically Accurate Fabric Brain Art)

Karen Norberg is not a knit-wit and she’s crafted the above anatomically correct human brain to prove it. Mind you, there are about a billion other ways to assert one’s intelligence but Norberg just wanted to be different. As long as she keeps her fiendishly sharp crocheting hooks out of my cortex, she’s welcome to “operate” any way she likes. Marjorie Taylor is another Scientifically Accurate Fabric Brain Artist (SAFBA, for short) who knits quilts based on PET scans. No actual pets were harmed in the knitting of this art. 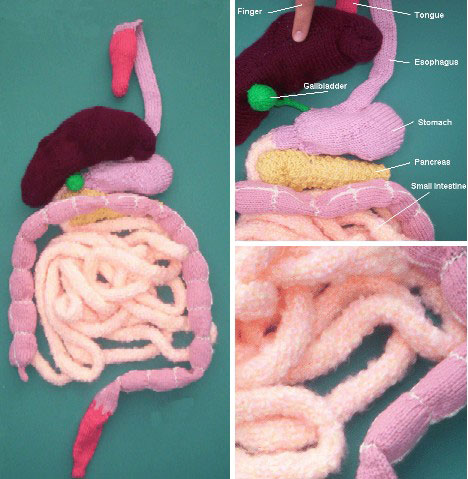 (image via: Strange But Trewe)

Not getting enough fiber in your diet? Then the Knitted Digestive System is just what you need! Detailed instructions and a pattern are listed… assuming, of course, you can stomach the results. 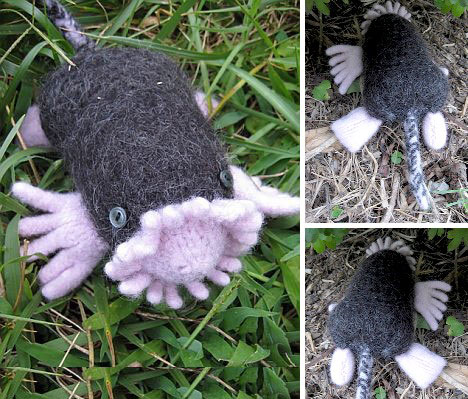 (images via: Softie Making and F.Pea)

Moving slightly away from the organic, we find this cute knitted Star-Nosed Mole. It’s one of my favorite creatures, just slightly behind the Platypus, and thanks to this charming pattern by Fawn Pea it’s destined to be yours as well. 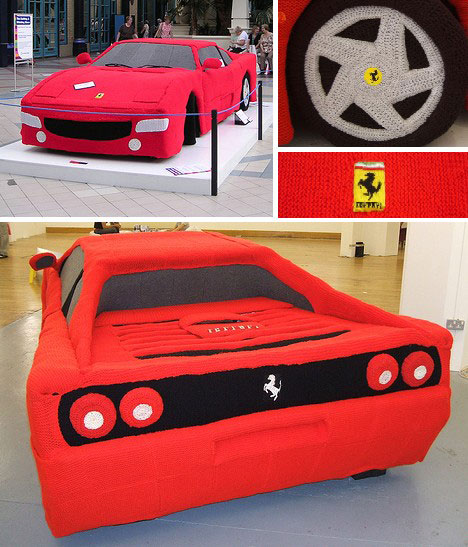 The above prefabricated Ferrari – emphasis on the fabric – will have everyone but the police shouting “pullover!” Seriously, this takes weaving through traffic to a new level but if worse comes to worsted one could hit the corduroy roads in four wool drive. Art student Lauren Porter (who’s probably heard all these puns and more) used 12 miles of red yarn in knitting the life-size faux Ferrari and the project took her over 10 months to complete. 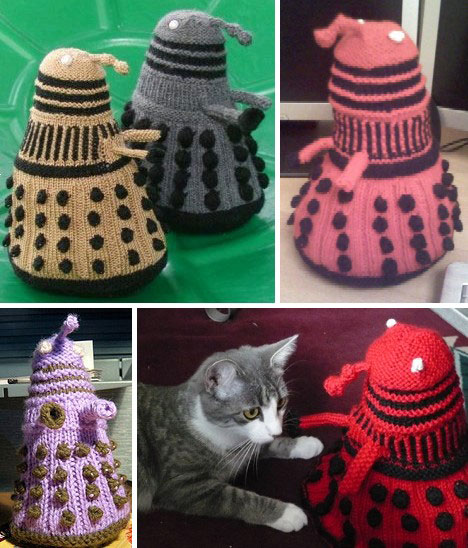 (images via: Entropy House and Sherlock.42)

Those wacky Brits are at it again, knitting up an invading force of soft, cuddly Daleks. The cybernetic villains of the long-running BBC series Doctor Who seem to be a favorite subject of UK knitters for some reason. The pattern is downloadable in a range of formats for those who feel moved to knit up their own fluffy invasion force. 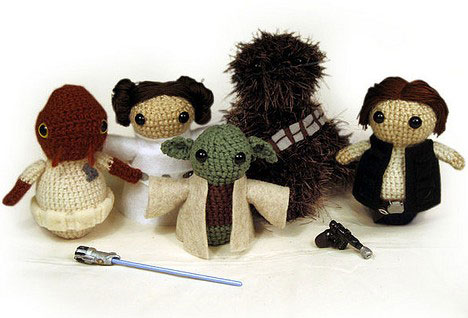 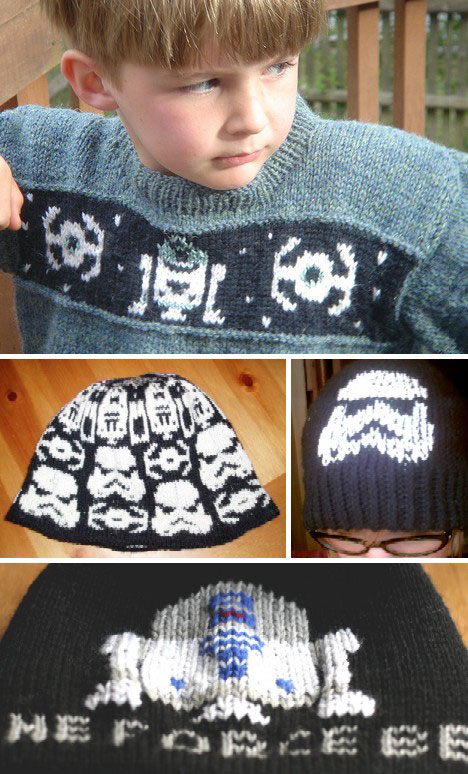 Star Wars makes a great subject for knitters as it’s become a pop culture phenomenon. The above selection of Star Wars themed knit hats & sweaters ensure the force will always be with you. or at least, ON you.

Harvey, Is That You? 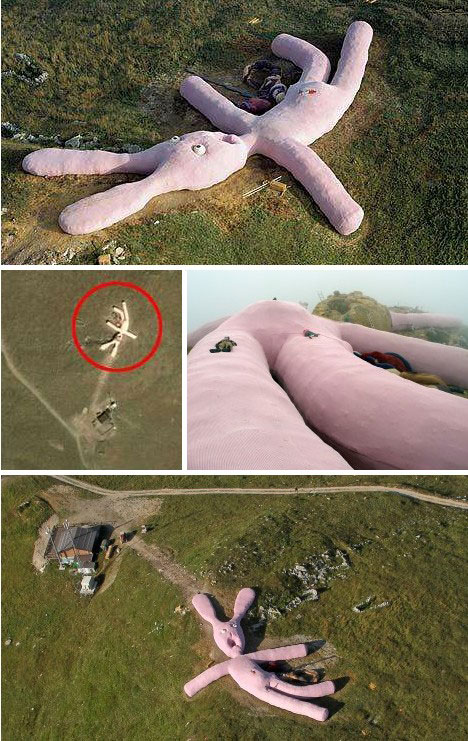 (images via: Trendhunter and Gelitin)

The best way to end is with a big finish, and when it comes to knitting there’s not much bigger than this 200-ft long pink bunny rabbit. The sculpture was knitted by a team of women under the direction of Gelitin, an Italian art collective and placed on the slope of a mountain in northern Italy. It’ll be there until the year 2025, barring some giant alien kid noticing it and throwing a tantrum. The sides of the rabbit are 20-ft. tall… you can see a person sleeping on its belly where the navel would be. The rabbit has its internal organs spilling out, as if it fell out of the sky to its death. Nice, Gelitin.